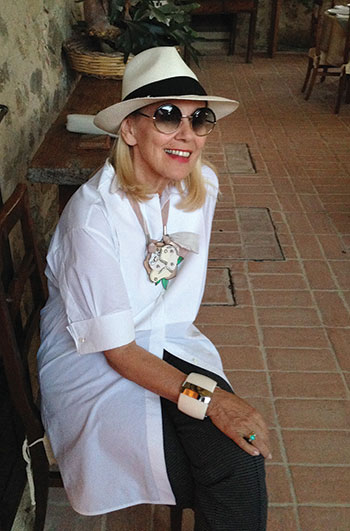 TORONTO – The Ukrainian Canadian Research and Documentation Center (UCRDC), which is involved in research on victims of the Holodomor and on the events of World War II in Ukraine, recently launched a new oral history project: interviews with the children of Holodomor survivors – persons who did not themselves live through the famine but experienced it through their family history.

Something similar has been done in the Jewish community, where it has been established that trauma can be transmitted from Holocaust survivor parents to their offspring.

Under the guidance of archivist Iroida Wynnyckyj, the project is ongoing at the UCRDC. Ms. Wynnyckyj and sociologist Vsevolod Isajiw developed a questionnaire and engaged Sophia Isajiw to implement the interview project. A list of about a dozen potential interviewees has been compiled and Ms. Isajiw has started her work. The interviews are being filmed by Andrij Holowaty.

One of the first subjects was Ludmilla Temertey, who was interviewed July 30. She is the sister of philanthropist James Temerty and she currently lives in Italy. (The siblings spell their last name differently.) The Temertey family comes from the Donbas area of Ukraine, but their roots are in the Greek community in Crimea. The Greeks were brought to Ukraine by Catharine the Great and they formed villages around Donetsk. That is where Ms. Temertey’s mother, Raissa Novikov, was born in 1921 and her father, Illya, in 1918. Both parents lived through the Holodomor.

Ms. Temertey found out about her family’s history piecemeal. “My father did not tell us too much about the collectivization. Although they lost their lands to Stalin’s collective farms, I don’t remember any really negative stories at all. About the execution of his father – he actually didn’t tell us about that – I found all that out from my mother. My grandfather did not belong to the Communist Party, but he refused to give up his farms, his land. He was arrested in 1930 and one of the witnesses – it’s in the execution order I gave you – accused him of being an agitator.”

“My grandfather was born in Styla, near Donetsk. I know that they did speak Greek. Elementary school education was in Greek. Higher education was in Russian. So, my father began to speak Ukrainian only when he met my mother. It was a community that was very, very Greek…,” she related.

“But our family was very, very, careful not to tell us very much when we were young, because they were very much afraid for the family that was left behind. You know, we had fled the Soviet Union but we were the only members of the family that had fled. So, for the family left behind, my father was dead – he was declared dead, he didn’t exist… should they [the family] have found out that he existed they would have been blacklisted. Both sides were blacklisted during the Soviet times, so they had a hard time of it. Their destination was Germany – a Displaced Persons camp, which was a refugee-processing center.”

After Germany, the family went to Belgium, where Ms. Temertey’s father found work as a miner. They stayed there for three years until repatriation back to the USSR became a threat. While in Belgium, her father’s dearest friend was lured away by the KGB. They got him drunk and kidnapped him. He was deported and shot. The father realized that it was dangerous to stay in Europe and decided they needed to run. So they left Belgium and came to Canada. Ms. Temertey remembers her time in Belgium as a happy one: “There were balls, there were churches, there were parties. It was not all tears, because we were young.”

On coming to Montreal in 1950, the Temerteys initially had the typical Ukrainian immigrant experience. The mother worked for five years at a sweatshop; the father held several jobs but also updated his engineering qualifications. But within five years, they owned a house and, as Ms. Temertey says, “we lived a good life in Montréal.”

In Montreal, Ms. Temertey studied at an English school and then at the Royal Academy of Art in Brussels. She worked as a graphic designer, a commercial artist, then as an illustrator and portraitist, eventually setting up a studio of her own. Her particular delight was documenting Ukrainian national costumes. Now, she says, she is completely retired and has bought property in Italy, in Montalcino, and is restoring a 700-year-old estate with a vineyard and olive groves. Her daughter Kalyna manages the vineyard, while her other daughter, Nicola, is an art historian.

After the family’s initial adjustment in Montreal Ms. Temertey’s mother became totally engaged in the Ukrainian community – she was the director of the Ukrainian school and involved her children in the community – Ukrainian school, Plast, etc. Ms. Temertey remembers, “My brother and I were very active anti-Communist protesters. So every time there was a cultural exchange with the Soviet Union, we would be marching with banners down the streets. This was exactly what my mother didn’t want. And there we were, on the front page, with our banners. My poor mother! It was only after she saw how active we were, that we were marching for the liberation of Ukraine…

“When I went to Europe to study… I wanted to go back to Czechoslovakia, where I was born… to my surprise I was stopped in Yugoslavia and they took my passport away… in Split, Yugoslavia. They came back with the passport and said now you can leave. But I wasn’t allowed to get out in Czhechoslovakia…,” Ms. Temertey recalled. “When I got back, my mother was terrified. She thought: now there must be a record of us being outside, somewhere safe … They had been running away from the KGB all of their lives. I did not know that at first. My parents had spared us being afraid.”

Ms. Temertey is the creator of the first Holodomor commemorative monument in Canada, erected in Edmonton in 1983. In 1999 Ms. Temertey painted a portrait of President Leonid Kuchma, although he did not leave a good impression on her. Ms. Temertey speaks Ukrainian, French, Italian and “a little bit of Russian.” Her mother died in 1997, her father in 2010.

Asked about her impression of being interviewed for the UCRDC’s oral history project, Ms. Temertey answered: “I understood how much I was defined by my parents’ history, even though I did not live through it. I was more than happy to share our family history.” 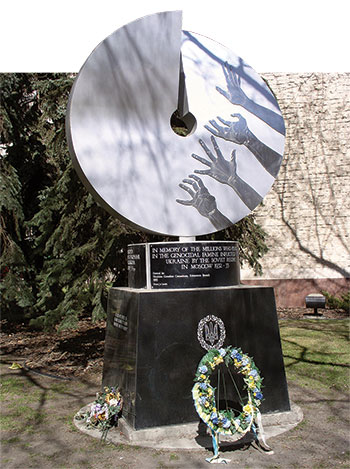 The Holodomor monument in Edmonton, Alberta, designed by Ludmilla Temertey.

“The interviewers were wonderful and really put one at ease. I found myself telling stories that had long been buried in the deep recesses of a mind tired of the atrocities being perpetuated in every corner of the planet to this day. I would say that one does a disservice to future generations by hesitating to speak out. Future generations need to be mindful of what the alternatives to democracy are. I have given my dearly departed mother and father a voice,” Ms. Temertey underscored.

“I wanted to honor those silent victims of this heinous crime against humanity and in particular my family and their indomitable spirit …they were survivors of the Holodomor,” she said. “It is of utmost importance to teach the young about these crimes and tyrannical regimes. History will continue to repeat itself if we don’t have an informed public that demands to know. The West chose to be silent because it was an inconvenient truth at the time. Citizens must never allow this to happen again.”