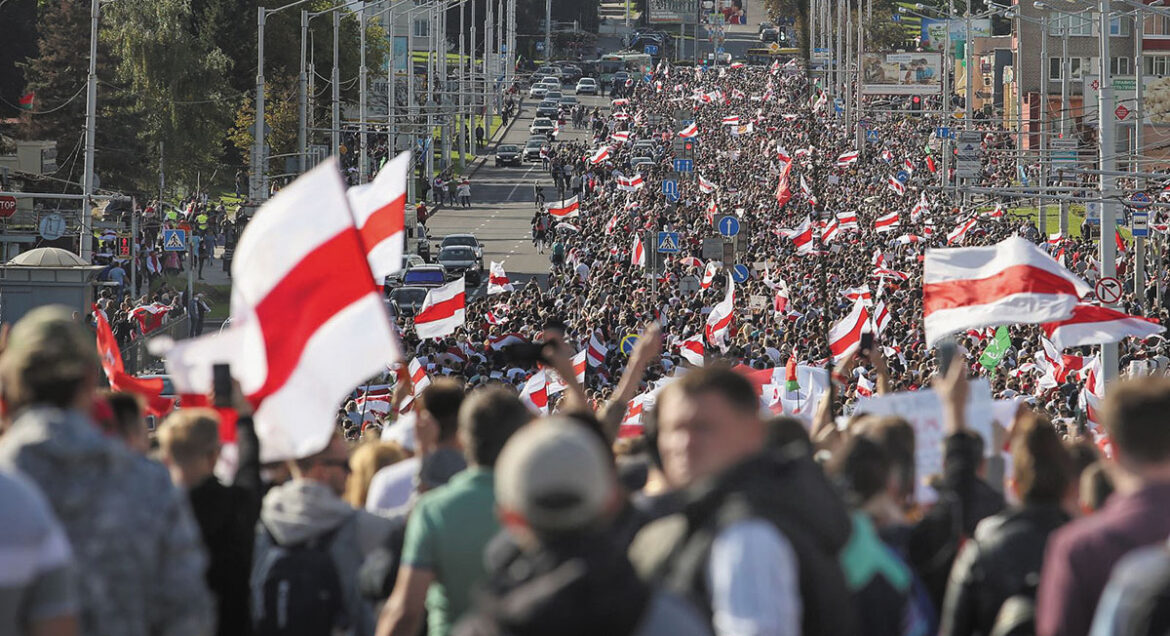 Tens of thousands march in Minsk on September 13 in support of the Belarusian opposition to the regime of President Alyaksandr Lukashenka.

KYIV – The unexpected peaceful but dramatic revolution in Belarus against the Lukashenka dictatorship is about to enter its seventh week. It has not only become a turning point in the country’s history and profoundly changed Belarus, but is also impacting in different ways on its diverse neighbors, including Ukraine in the south.

For Ukraine, the new and evolving situation, rife with uncertainty as to the direction it will take and the eventual outcome, is replete with challenges, threats and dangers, but also potential new opportunities and possible significant changes for the better.

The challenges and dangers are obvious enough: a brutal dictatorship next door on a long shared border which is no longer disguising its hostility to a democratic and pro-Western Ukraine and what it represents; an embattled despot, rejected by his people and desperate to secure Vladimir Putin’s support at any cost, including becoming a vassal of Moscow, or as Alyaksandr Luka­shenka now puts it, having reverted this week to the servile language expected of the non-Russians during the Soviet era – the Russian “elder brother.”

If, in desperation to cling to the semblance of power, Mr. Lukashenka scrambles to bring Belarus “closer” to Russia, condoning, in effect, the merger of the two states – or, rather, Belarus’s absorption – then the political, military and economic threats that this implies for Ukraine, still facing Russian aggression in the Donbas, will be seriously aggravated. Not exactly what Ukraine needs when it is at war with Russia and seeking to recover the occupied territories in the Donbas and in Crimea.

On the other hand, if the Belarusian people continue to display the unity, resilience, heroism and creativity they have demonstrated in the face of the shocking brutality and disregard for the law and human rights on the part of the Lukashenka regime, and if their struggle for regime change is successful, this could be a gamechanger in the region and for Europe as a whole. And while many Belarusians may feel a special affinity with their Lithuanian or Polish neighbors, there is much that also links Ukrainians with their northern neighbors, culturally and historically.

The Belarusian revolt against dictatorship has so far tactfully not proclaimed itself to be either pro-Western or pro-Eurasian in the sense of the hitherto existing close economic and political bonds with Russia and its other partners among the former Soviet states. But its rejection of despotism and the Eurasian notion of rulers remaining in power for life implicitly identifies the revolt with the democratic European model. And Ukraine, where (regardless of the flaws in its democratic system) regular elections have been democratic and resulted in the change of leaders, is both exemplary in this regard and an irritant for the enemies of democracy.

There is another reason that what we are witnessing in Belarus has important historic significance. It is, after all, not just a democratic uprising but simultaneously a national revolution in the making. The white-red-white national flag of independent Belarus which Mr. Lukashenka has sought to suppress – and which is still being torn down and trampled on by his masked uniformed and plainclothes “security” forces – has been embraced as the uprising’s banner, while the neo-Soviet green and red one that the president has imposed as the state colors has been rejected. The Belarusian language, thought by many to be dying out, is suddenly being used proudly and defiantly once again.

In short, what is occurring in Belarus is the remarkable simultaneous resurgence of democratic and national consciousness. Consequently, it represents the de facto completion of the dissolution of the former Soviet Union, with a missing piece in Europe’s jigsaw being retrieved. It is, in fact, the return of an Eastern European state that had been prevented from integrating with its European neighbors and kept hostage, economically, politically and culturally by Russia and its Eurasian conglomerate.

The implications for Russia, for Ukraine, Poland and Lithuania, as for Europe and geopolitics generally are potentially profound and, of course, inevitably problematic because of Moscow’s inevitable opposition. But this was the case with the Baltic states and more recently with Ukraine. All will depend ultimately on what the Belarusian people decide and what viable options are available.

Ukraine has aligned itself with its Western partners, and most notably its newly affirmed allies in the Lublin triangle – Lithuania and Poland – and others, most notably the European Union as a whole, and has not recognized the results of the fake Belarusian presidential election. The move by the Ukrainian Verkhovna Rada on September 15 declaring that it does not regard Mr. Lukashenka as Belarus’s president has underscored this.

“We join the European Union’s assessments of the undemocratic nature of the presidential election in Belarus and support the imposition of sanctions on those responsible for electoral fraud and violence against protesters,” the Ukrainian lawmakers declared in the resolution that 228 of them voted to adopt.

The resolution also rejected recent accusations from official Moscow, parroting statements emanating from the Kremlin, that Ukraine was involved with Lithuania, Poland and the Czech Republic in fomenting disaffection and unrest in Belarus. On September 2, Russia’s Foreign Affairs Minister Sergei Lavrov went as far as to claim that there were 200 Ukrainian ultra-right radicals in Belarus instigating the trouble. The following day Mr. Lukashenka faithfully responded to this prompt by repeating the accusation.

At the time, Ukraine’s Minister of Foreign Affairs Dmytro Kuleba countered this “nonsense,” as he called it, by reminding both Minsk and Moscow that Russia had sent its propagandists to replace Belarusian journalists who had refused to support the Lukashenka regime and, as a diversionary tactic, was trying to depict its “little green men” as Ukrainian extremists.

After the rigging of the presidential election in Belarus on August 9, which provoked the massive countrywide protests against Mr. Lukashenka’s contempt for democracy, relations between Minsk and Kyiv were ruptured almost immediately. Mr. Lukashenka dropped his pretense of balancing between Moscow and the West, and of being a defender of Belarus’s sovereignty from Russia and a friend of Ukraine.

Realizing that only Moscow could save him from public wrath, President Luka­shenka immediately slapped Ukrainian President Volodymyr Zelenskyy in the face by handing back to Russia mercenaries from the “private” Russian Wagner army whom he had “detained” on Belarusian territory. Ukraine had sought their extradition because of their suspected involvement in the war in the Donbas. Before the election, Mr. Lukashenka had encouraged Mr. Zelenskyy to believe that he was willing to hand them over.

In fact, during the last weeks, relations between official Kyiv and Minsk, have dropped to their lowest point since December 1991, when the dissolution of the USSR was agreed upon at the Belovezh­skaya Pushcha national park in western Belarus by the leaders of Russia, Belarus and Ukraine. On the other hand, the empathy and solidarity of Ukrainians, including their officialdom, with the Belarusians has probably never been as strong.

Official Minsk’s attitude remains hostile and provocative. To demonstrate its displeasure, on August 17 Kyiv withdrew its ambassador, Ihor Kyzym, “for consultations.” On his return on September 7, his diplomatic immunity was violated by Belarusian border guards who insisted on checking his vehicle. The Ukrainian side formally protested; Minsk denied it had occurred.

A more resonant incident occurred on September 8 when Minsk tried to implicate Kyiv in a crudely fabricated story of three members of the opposition Coordination Council supposedly trying to escape across the border into Ukraine. The leading figure, Maryya Kalesnikava, tore up her Belarusian passport at the last minute to prevent the scenario engineered by Minsk and was subsequently arrested on the Belarusian side. Her two colleagues, Anton Randyonkau, press secretary of the Coordination Council, and Ivan Kravtsov, immediately gave a press conference in Kyiv describing how their involuntary arrival in Ukraine had been stage-managed by the Belarusian security services.

The following day, Mr. Lukashenka mentioned Ukraine disparagingly several times in an interview given to Russian journalists. He told them that Russia understands that “Belarus cannot be given to the United States, as was done with Ukraine.” He claimed he had prevented the creation of a “cordon sanitaire” of the Baltic states, Belarus and Ukraine which would keep Russia further away from Europe and “This is why the Americans hate me.”

In a resolution passed by the Verkhovna Rada, the Ukrainian national deputies affirmed their support for the independence of Belarus, warned Russia against interfering in its affairs, and stressed: “Belarus has always been and will be a fraternal state for us, with which we have historical, cultural and spiritual links. We hope that Belarus will overcome this difficult stage without weakening its sovereignty.”

On the same day, while on an official visit to Austria, President Zelenskyy told journalists: “I unequivocally support the Belarusian people. People are fighting for freedom and democracy, without aggression and violence. No one is throwing stones, no one is setting buildings on fire. Many demonstrators are being ill-treated by the state. It is important to me that there is no bloody massacre. If the state refuses to dialogue with the people, Belarus might get something like a Maidan.” Mr. Zelensky was referring to the violent side of the confrontation between Ukrainian protesters and the security forces protecting in late 2013-early 2014 the then president of Ukraine, Viktor Yanukovych.

In light of what is happening in Belarus and Mr. Lukashenka’s alignment with Mr. Putin, the Ukrainian president was asked during his official visit to Vienna if it was not time to move the “peace talks” with regard to the war in the Donbas from the Belarusian capital of Minsk to another country. He refused to be drawn, saying it was necessary to wait and see how the situation in Belarus develops. What is interesting though is that his host, Austrian Chancellor Vienna Sebastian Kurz, proposed Vienna as an alternative venue for future talks between Ukraine, Russia and the OSCE. Austria, he said, was ready to make its “contribution.”

The most recent provocation by the Lukashenka regime is its exploitation of the attempt by about 1,000 Jewish Hassidic pilgrims to circumvent the ban on foreigners entering Ukraine because of the coronavirus pandemic by arriving via Belarus. Ukraine has not relented and kept the border in the north and elsewhere closed to foreigners. On September 16, the Bela­rusian Ministry of Foreign Affairs cynically accused Ukraine of religious discrimination and violating human rights.

This, then, is the current situation, with official Minsk and Kyiv suddenly plunged into a cold war as Mr. Lukashenka seeks to ingratiate himself with Mr. Putin. But, together with others, Ukrainians are watching with astonishment and sympathy the unfolding Belarusian developments.

To be fair, the support from Ukrainian society as a whole has not been as enthusiastic for some reason as could reasonably be expected from a country that went through the Euro-Maidan and the Revolution of Dignity, and skepticism has been displayed in some quarters. Questions have been raised about the Belarusian revolution’s leaders, or apparent lack of them, their methods, and Russia’s possible behind-the-scenes manipulation.

Moreover, Ukrainians have been used to claiming the role of Eastern Europe’s primary champion of democratic transformation and European values, and some may now feel they are being superseded by the Belarusian national democratic revolution.

This is, therefore, also a test for Ukraine’s maturity and receptiveness to an unexpected stimulus for all democratic and European forces, and one that could also help Ukraine review where it’s at, see priorities more clearly and strengthen solidarity with its partners. Ukraine can hardly afford to let its Belarusian neighbors down at this critical historical moment.