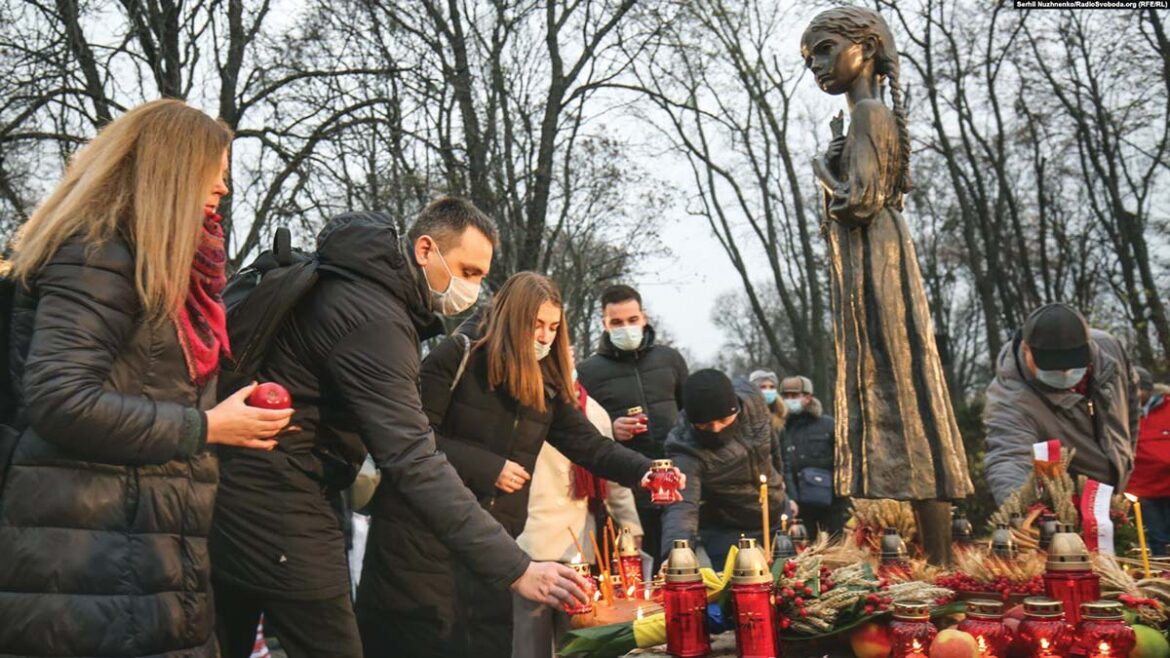 People gathered near the Holodomor Memorial in Kyiv to honor the memory of those killed in the famine.

KYIV – During a series of events here on November 28, Ukrainian President Volodymyr Zelenskyy and First Lady Olena Zelenska paid tribute to the millions of victims who perished as a result of Stalin’s Famine-Genocide – the Holodomor of 1932-1933.

“We honor our ancestors, remember the black pages of history and the years that scarred the hearts of our people,” Mr. Zelenskyy said during his address on Holodomor Victims Remembrance Day. “The Holodomor, which was recognized as an act of genocide committed against our people by the totalitarian Stalinist regime, resulted in millions of Ukrainians’ deaths. These are losses comparable to those suffered by Ukraine in World War II,” the president said.

The Ukrainian president added that the government will provide the funds needed to complete the Holodomor Museum. “The project of the National Museum of the Holodomor Genocide is very important for Ukraine, for our history and future. There were some problems with the financing of this project. However, such projects must be implemented. I gave instructions to the Cabinet of Ministers, and this issue will be resolved. The project will definitely be completed,” Mr. Zelenskyy stressed. 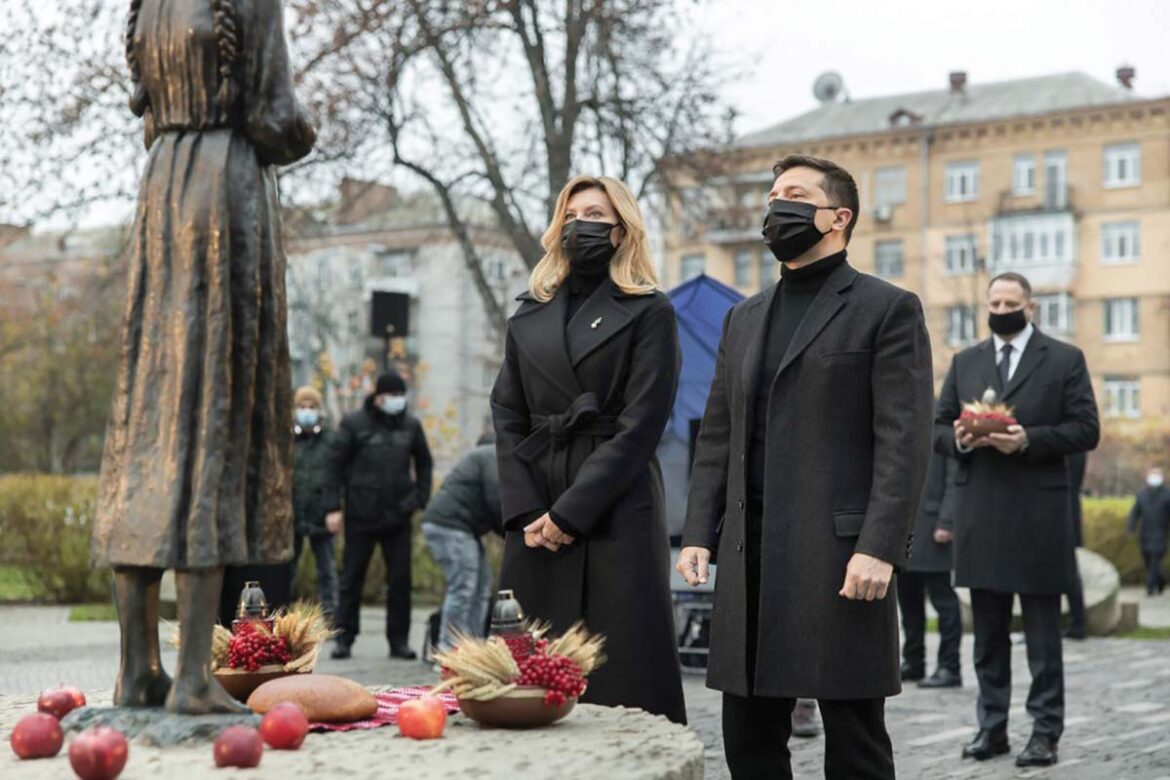 On November 30, the Cabinet of Ministers prepared an order which is aimed at providing additional opportunities to fund the National Museum of the Holodomor Genocide.

The museum is among other projects in Ukraine that aim to raise funds from different sources without relying only on money from the government budget.  According to the official museum website, “the Holodomor Museum is to have educational, research, commemorative, and artistic functions. Its creation is contingent upon an efficient partnership between the Ukrainian government and Ukrainian society. Big donors, medium-sized businesses and individual philanthropists in Ukraine and abroad have to join hands to raise the fundraising campaign target amount,” which, according the museum’s website, is $60 million.

One of the biggest campaigns in this year’s commemoration was a crowdfunding platform, “Grains of Truth.” The platform, located online at zernapravdy.org, was set up by the International Foundation for the Development of the Holodomor Victims Memorial. Visitors to the website will first click on yellow and gray grains.  Each yellow grain contains information about a person who died as a result of the Holodomor.  After clicking a gray grain and making a financial contribution to “Grains of Truth,” a visitor to the webstie will then receive information about a Holodomor victim.

A counter on the platform shows the number of honored victims, benefactors, and the total amount of money that has been collected.  Contributions have ranged from five hryvnias to several thousand. Contributors can remain anonymous, leave messages for others to read, or they can dedicate a donation to relatives who were victims of the Holodomor.

As a powerful and visceral reminder of the suffering faced by Holodomor victims, Ukrainian youth unveiled an online restaurant, “Uncounted since 1932,” on the eve of Holodomor Remembrance Day.  Students of the Ukrainian Leadership Academy – which aims to develop young leaders aged 16-20 – created the website to display a menu of dishes that Ukrainians ate during the famine years: mash from grated tree bark, burnt quince, straw bread, and so on.  Some of the recipes were recreated by teenagers who asked their surviving grandparents to recall what they had to eat.

“My grandmother used to tell me how the bark of an oak or a birch tree was ground in a mortar with the root of quince or reeds, a stalk of a dandelion or chamomile,” said Ilona Kotovshchyk, a student at the Ukrainian Leadership Academy whose family survived the Holodomor while living in Kyiv Oblast.

“These were the ingredients for baking cakes in those hard years,” Mrs. Kotov­shchyk said.  “When I tore off this bark with cold hands, I was thinking of my grandmother. In her stories, she did it because there was nothing to eat for several weeks. All my life, she forbade me to throw away bread or play with food.”

For the past three years, students from the Ukrainian Leadership Academy have organized pop-up street restaurants with Holodomor dishes to serve meals in seven cities throughout Ukraine, as well as in Israel and Belgium.  Their goal is to ensure people experience first-hand what Ukrainians had to eat in their effort to escape hunger.

“The taste and appearance of this food, its eerie ingredients, bring closer the understanding of what horrors every Ukrainian had to go through during the Holodomor,” said Sviatoslav Kelym-Zolotayko, author of this year’s project. “Pinecone soup and grass bread were even tasted by European Parliament deputies. They were very impressed [by the project]. They asked a lot of questions about the Holodomor and gave comments to the media. It was a clear image for people from all over the planet who speak different languages.”

Mr. Kelym-Zolotayko said that there is still a great need to continue the work of raising public awareness of the Holodomor.  “We should understand that the Holodo­mor – one of the greatest genocides of humanity – is still almost unknown in the world,” he said. As a result of pandemic restrictions, this year the restaurant’s unique format was transformed into an online project.

While such projects aim to enlighten people who are still not aware of the Holodomor, the United States, Canada and European countries have issued statements in solidarity with Ukraine’s people to honor those who died in the genocide. “Our memory is the best way to prevent such tragedies in the world in the future,” said Christine Quinn, the U.S. Charge d’Affaires in Ukraine.

New Jersey Senator Bob Menendez issued a statement on the Holodomor directed to Ukrainians. “I join the people of Ukraine and the Americans of Ukrainian descent in New Jersey, who remember the millions of people who died during the Holodomor. Almost 90 years after Stalin deliberately staged a famine in Ukraine and closed the country’s borders to prevent starving Ukrainians from fleeing or receiving food aid, Holodomor Remembrance Day is an important reminder of the brutality of the Soviet Union and the unwavering spirit of Ukrainians,” he said.

Canadian Defense Minister Harjit Sajjan emphasized that the cooperation with the Ukrainian army will prevent such tragedies from happening again. “Holodomor victims will be commemorated throughout Canada this week. We unwaveringly support our Ukrainian friends and partners – the training mission in Ukraine proves it. We are united in this honor and are committed to ensuring that the horrors of the past do not happen again,” the minister said in a statement.

Each year on the last Saturday in November Ukrainians all over the world remember Holodomor victims.  Due to quarantine restrictions, this year’s commemorations in Ukraine also took place virtually with events on television, social media, and via other internet platforms. The act of lighting a candle in a window has become more common among Ukrainians, who also hold a nationwide moment of silence at 4 p.m. on the last Saturday in November. Events here also paid tribute to the victims of famines that occurred in Ukraine in 1922-1923 and 1946-1947.