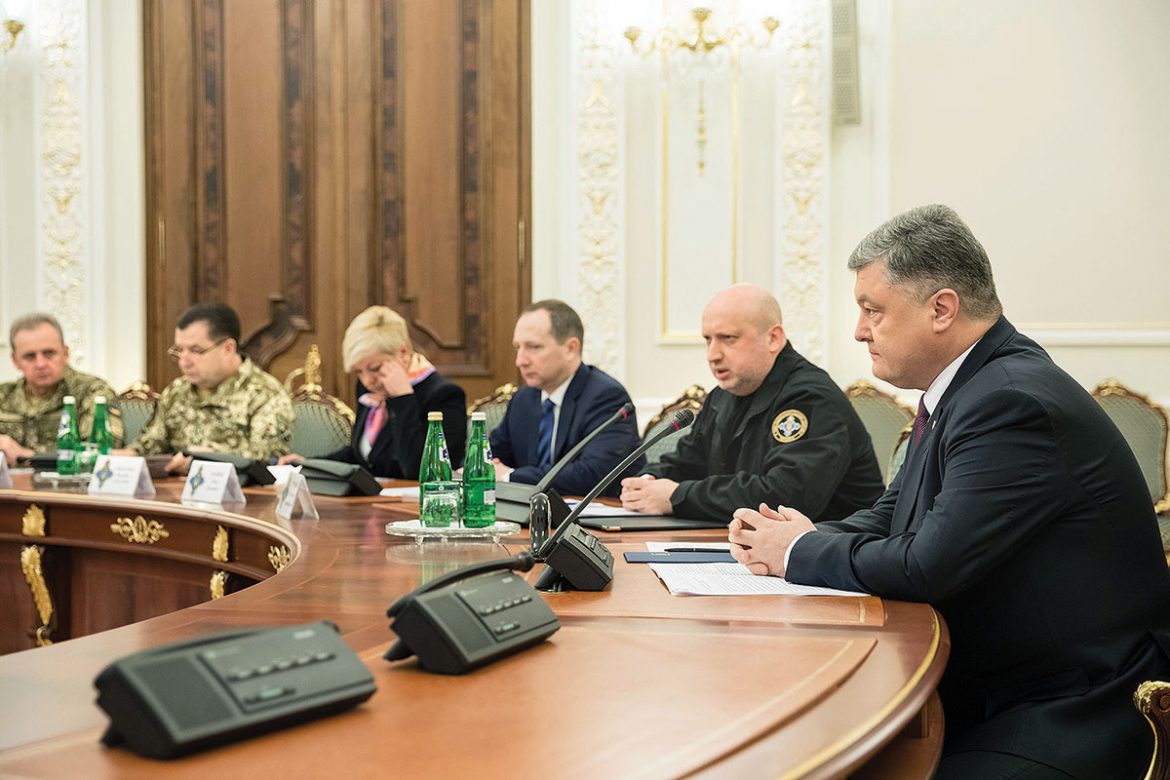 President Petro Poroshenko (right) and National Security and Defense Council Secretary Oleksandr Turchynov (second from right) at the council’s meeting on March 15, when a decision was made to halt all cargo traffic with the occupied Donbas.

KYIV – Ukraine’s National Security and Defense Council halted the flow of road and rail cargo traffic in the occupied Donetsk and Luhansk oblasts, following a decision during an ad hoc meeting on March 15. The measure also ordered the Security Service of Ukraine (known as the SBU) to probe the banks that have capital from state-owned Russian financial institutions and to, “within a day, provide relevant proposals, in particular, the introduction of sanctions against them.”

President Petro Poroshenko said he convened the extraordinary meeting due to a trade blockade that Donbas war veterans, helped by a group of lawmakers mostly from the Samopomich party, had started six weeks ago. The blockade had led to clashes between the pro-blockade activists and police in Donetsk Oblast and in Kyiv on March 14, as well as reciprocal measures enacted by the Kremlin-installed proxies in the occupied parts of easternmost Donetsk and Luhansk oblasts. Nationwide protests in support of the blockaders in at least 13 cities in 12 regions also were held this week.

Pro-blockade lawmakers from the Samopomich and Batkivshchyna parties assert that the trade helps prop up the Kremlin-installed proxies in the Donbas and say the business ties are “tainted with blood.”

In turn, Mr. Poroshenko called the blockade, which started on January 25, counterproductive to restoring sovereignty over the territory Kyiv doesn’t control.

“For six weeks the blockaders didn’t bring closer, but pushed further way the prospect of returning these districts,” the president said during the national security meeting. “They didn’t strengthen, but weakened Ukraine’s influence on that side of the contact line. They didn’t return a single one of our prisoners… Didn’t restrain Russia’s aggression, but stoked it more. They didn’t contribute to restoring Ukraine’s territorial integrity, but complicated the task more.”

Humanitarian aid can still be transported, according to the measure, while the president said the cargo suspension will remain in force until the “occupiers return all stolen Ukrainian factories to Ukrainian jurisdiction.”

He also rejected a bill, which pro-blockade national deputies are pushing, that would recognize areas the government doesn’t control as occupied and designates the conflict as a war in which Russia is the aggressor.

This would “legalize” losing part of Donbas and “propel several million Ukrainians to Russia,” Mr. Poroshenko said. Other consequences, he added, include destroying the Minsk peace accord to which Russia and Ukraine are co-signatories and “bury[ing] international sanctions imposed on Russia inasmuch as they’re tied to Minsk.”

Therefore, the president said he’ll propose a law on “restoring the territorial integrity of our country.”

The break-up of one of three rail blockades near the frontline on March 13, during which the SBU arrested 43 activists, some of whom were armed, triggered the public outcry. Although they were released the following day, pro-blockade activists clashed with police in Kyiv and in Donetsk Oblast near Sloviansk and Kramatorsk on March 14, when the nation was celebrating Volunteer Day.

Many of the blockaders are former Donbas war veterans like independent lawmaker Volodymyr Parasiuk, and Semen Semenchenko of the Samopomich party who founded and initially led the volunteer Donbas Battalion when Moscow engineered an armed uprising in the Donbas in April 2014.

Ukraine has grown weary of three years of unprovoked war by Russia that has killed over 10,000 people and uprooted 1.7 million people from their homes. This year alone, as of March 15, 51 Ukrainian servicemen have been killed.

While activists tried storming an office in Kyiv belonging to billionaire Rinat Akhmetov, who owns coal mines and steel plants on both sides of the front line, and Alfa-Bank, a Moscow-based financial institution, Mr. Parasiuk clashed with police in the east on March 14. 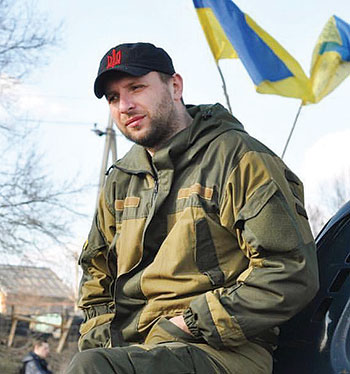 National Deputy Volodymyr Parasiuk, one of the leaders of the trade blockade that began on January 25.

Police arrested seven of the 60 activists with whom the national deputy was traveling en route to a blockade in Donetsk Oblast. They were detained near Kramatorsk after clashing with another group of police near Sloviansk. Mr. Parasiuk said on his Facebook page that police beat his sister and that his father was hospitalized.

A criminal investigation is under way for either “threatening or using violence toward a law enforcement officer,” Donetsk Oblast police chief Vyacheslav Abroskin stated.

He said that seven law enforcement personnel were injured during clashes. Both sides accuse each other of instigating the physical confrontation. Kramatorsk police also fired warning shots in the air with automatic rifles to stop Mr. Parasiuk’s motorcade of 13 vehicles from passing through a checkpoint.

“I won’t allow the humiliation of Donetsk Oblast police who for three years are at the war front…,” the regional police chief said on Facebook.

Prime Minister Volodymyr Groysman has warned that cutting off trade could cost state coffers $3.5 billion and up to 75,000 jobs.

When news of the March 13 blockade break-up emerged, protesters in Kyiv, Kharkiv, Odesa, Dnipro, Lviv, Poltava, Ivano-Frankivsk, Zaporizhia, Vinnytsia, Chernivtsi, Kryvyi Rih and Ternopil took to the streets, according to the Interfax news agency and the blockaders’ main Facebook page.

A group of nationalists from the Azov Battalion and Pravyi Sektor arrived with bricks to wall off the entrance to the main branch of Russian state-owned Sberbank in Kyiv on March 13. That was in response to the bank’s statement five days earlier that said it would recognize identity documents issued to people living in the occupied Donbas.

Although the Russian bank – one of the nation’s 10 biggest based on assets – rescinded its statement two days later, activists also damaged 26 Sberbank ATMs with foam sealant. In response, the bank limited individual daily cash withdrawals to 30,000 hrv on March 15.

Russia and its proxies in the Donbas have taken several retaliatory steps since the trade blockade started. Russian President Vladimir Putin issued a decree on February that recognizes the identity documents of people living in the non-government controlled part of eastern Ukraine. 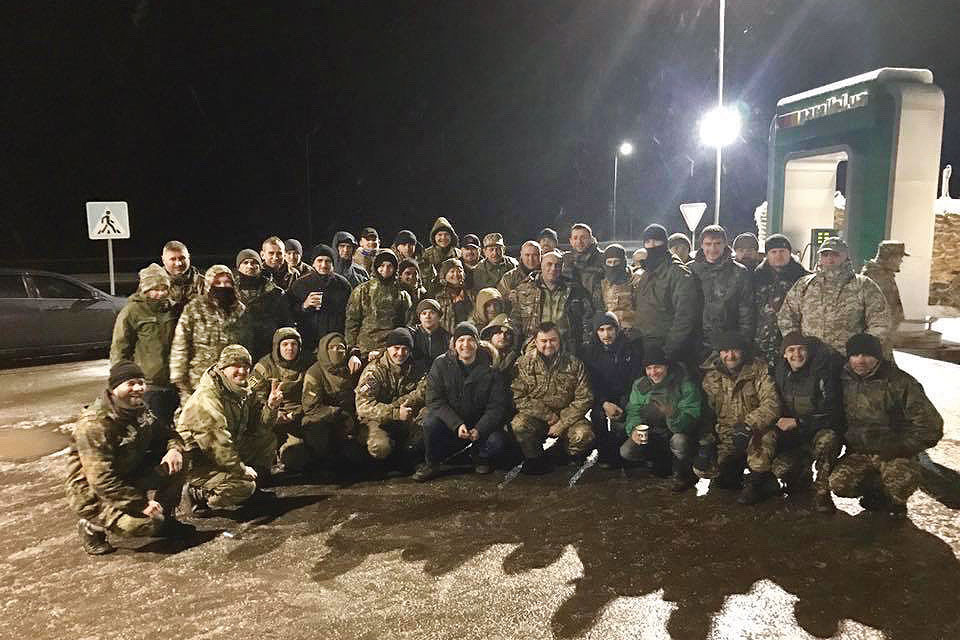 A photo posted on February 25 by Volodymyr Parasiuk is captioned “trade blockade expands” and identifies the venue as being on the road between Mariupol and Donetsk, near Novotroitsk.

Moscow’s proxies then stated that the Russian ruble would be the currency used in the occupied Donbas. And this week, Ukrainian citizen Aleksandr Zakharchenko – the Kremlin-installed puppet of occupied Donetsk – said that the contact line established by the Minsk peace accord would be the self-proclaimed separatist republic’s “state border.”

Additionally, the Moscow-backed proxies threatened to take over some 45 enterprises, mostly coal mines and steel mills, belonging to Ukrainian companies, the majority of which belonging to Mr. Akhmetov – a Donetsk native and a one-time staunch supporter of fugitive ex-President Viktor Yanukovych.

Mr. Akhmetov also no longer has control over two luxurious hotels in Donetsk and the Donbas Arena from which humanitarian aid had been distributed to non-government controlled areas.