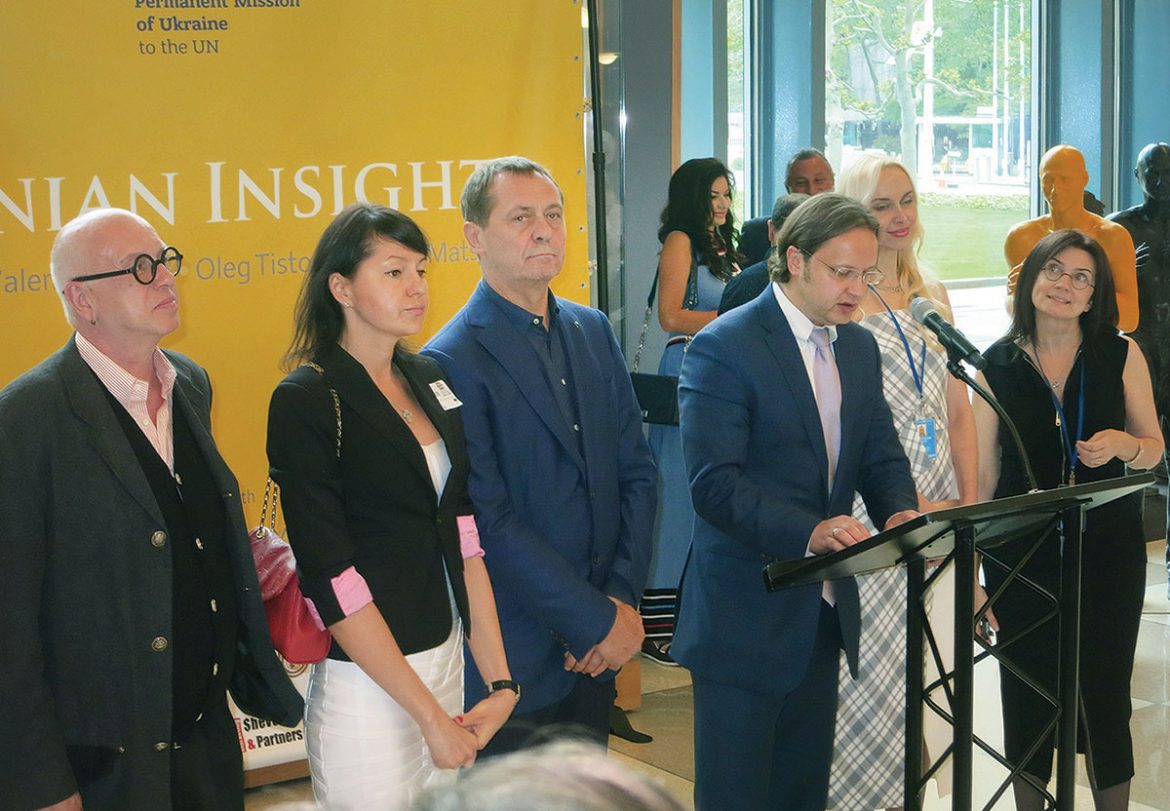 Yuri Vitrenko (at the microphone), chargé d’affairs of Ukraine’s Mission to the United Nations, welcomes guests to the opening reception of the art exhibit “Ukrainian Insights” at the Delegates Entrance Hall of the U.N. General Assembly building. With him (from left) are: Valentin Popov, Iryna Sydorenko with her husband Victor Sydorenko, art director Tamara Shevchenko and exhibit curator Natalia Shpitkovskaya.

UNITED NATIONS – The Permanent Mission of Ukraine to the United Nations on May 16 officially opened an art exhibit, “Ukrainian Insights,” that featured works by contemporary artists from Ukraine: Victor Sydorenko, Oleg Tistol, Mykola Matsenko and Valentin Popov. The latest example of “cultural diplomacy” by the Permanent Mission, the exhibit aims to show the cultural, political and spiritual aspects of Ukraine and the promise of Ukraine’s future in a global context.

The exhibit, curated by Natalia Shpitkov-skaya and art director Tamara Shevchenko, is on display at the Delegates Entrance Hall, is free to the public and concludes on May 26.

Nearly 100 people attended the opening of the exhibit and reception, which was paired with a lecture, “A Dialogue with Timothy Snyder About Ukraine,” by Prof. Timothy Snyder of Yale University, also hosted by the Ukraine’s Mission to the U.N. (More information about the lecture and Prof. Snyder’s latest book, “On Tyranny,” will appear in the May 28 issue.)

On display at the exhibit were: “Cupola,” a four-panel ethereal image of people seeming to ascend and descend in midair and a fiberglass/plastic sculpture “Deperso-nalization” by Mr. Sydorenko; an installation of the four-panel painting “Happiness of Labor” by Mr. Tistol flanked by two 12-panel squares using folk motifs, “Neofolk,” by Mr. Matsenko; and three paintings by Mr. Popov, “From… to…,” “Red Candles” and “Life is painful, suffering is optional.” 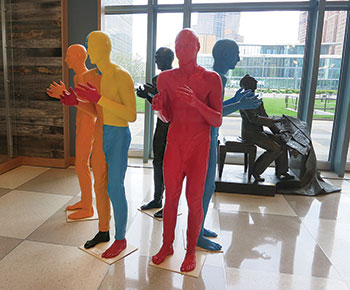 “Depersonalization” by Victor Sydorenko, made of fiberglass/plastic construction.

In his official greeting, Yuri Vitrenko, chargé d’affairs of the Permanent Mission of Ukraine to the U.N., said that this exhibit is a testament to Ukraine being a vibrant country in the face of Russian aggression. This was the first time, he said, that the exhibit was on display in New York, and at the United Nations Headquarters.

A statement by the exhibit organizers said: the artists “present their creative pursuits through a modern worldview perspective. Their works deliver an aesthetic, ideological, philosophical message that defines Ukraine’s national, political and cultural identity. ‘Ukrainian Insights’ is the embodiment of creative ideas, using the spirit of past experiences to expose insights into the future. The project creates a platform that will further promote Ukraine’s independent identity within the international arena and bring greater recognition to the achievements of its people.”

Mr. Popov, who resides in San Francisco, but is originally from Kyiv, is the recipient of numerous awards. Examples of his works can be seen at the Metropolitan Museum of Art in New York, the New York Public Library, the Achenbach Foundation for Graphic Arts in San Francisco and the National Art Museum of Ukraine in Kyiv, among others.

Mr. Sydorenko, who was born in Kazakhstan, graduated from the Kharkiv Art and Industry Institute, and serves as the vice-president of the National Academy of Arts of Ukraine. His works appeared at the 50th Venice Biennale “Millstones in Time,” and his works have been displayed at the National Art Museum in Kyiv, the Yale University School of Art, the Museum of Contemporary Art KIASMA in Helsinki, and other venues.

Mr. Tistol hails from the Mykolayiv Oblast of Ukraine and graduated from the institution now known as the Lviv National Academy of Arts. In addition to painting, Mr. Tistol is a painter, photographer, the creator of art installations, an author, a sculptor and a performer. He has worked with Mr. Matsenko on the project “Natsprom.” His work tends to focus on national stereotypes and common cultural patterns, and as an author he uses deep cultural roots as a reflection point against reality and artistic play.

Readers may view the exhibit, located in the General Assembly building of the United Nations Headquarters, between the hours of 9 a.m. and 4:30 p.m., using the entrance located at 46th Street and First Avenue, New York. Additional information can be found at www.artcult.org.ua/en. 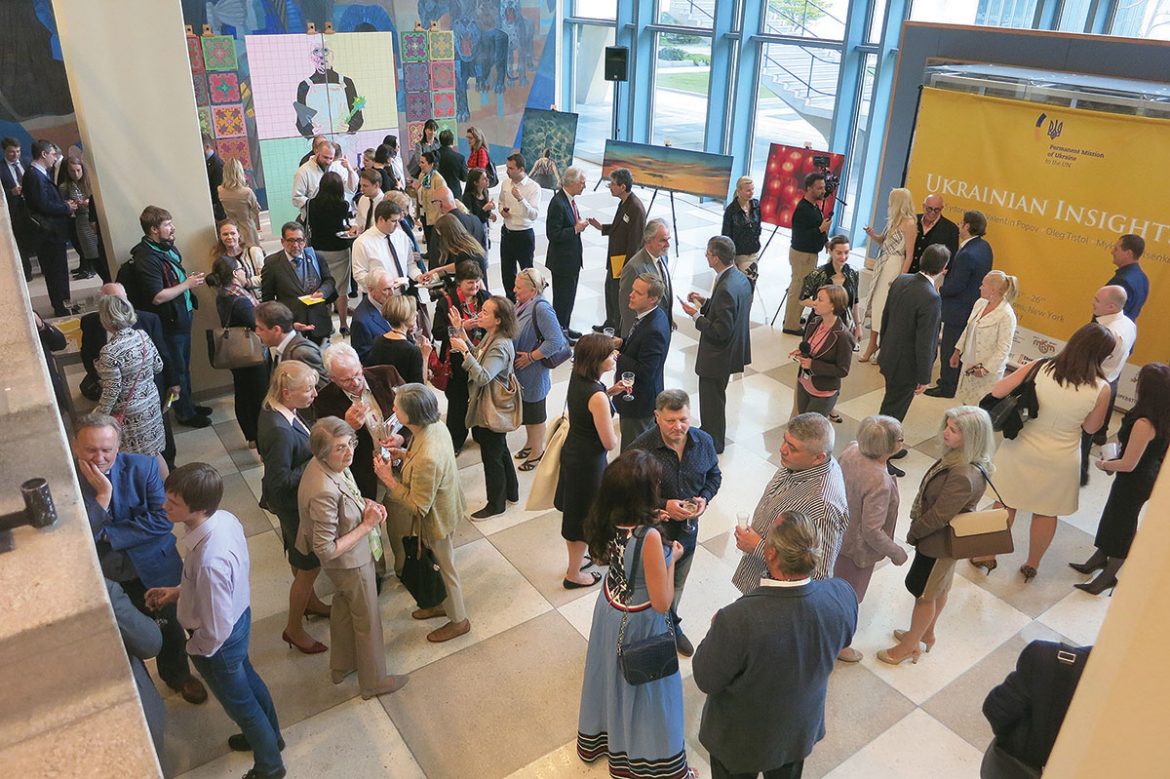