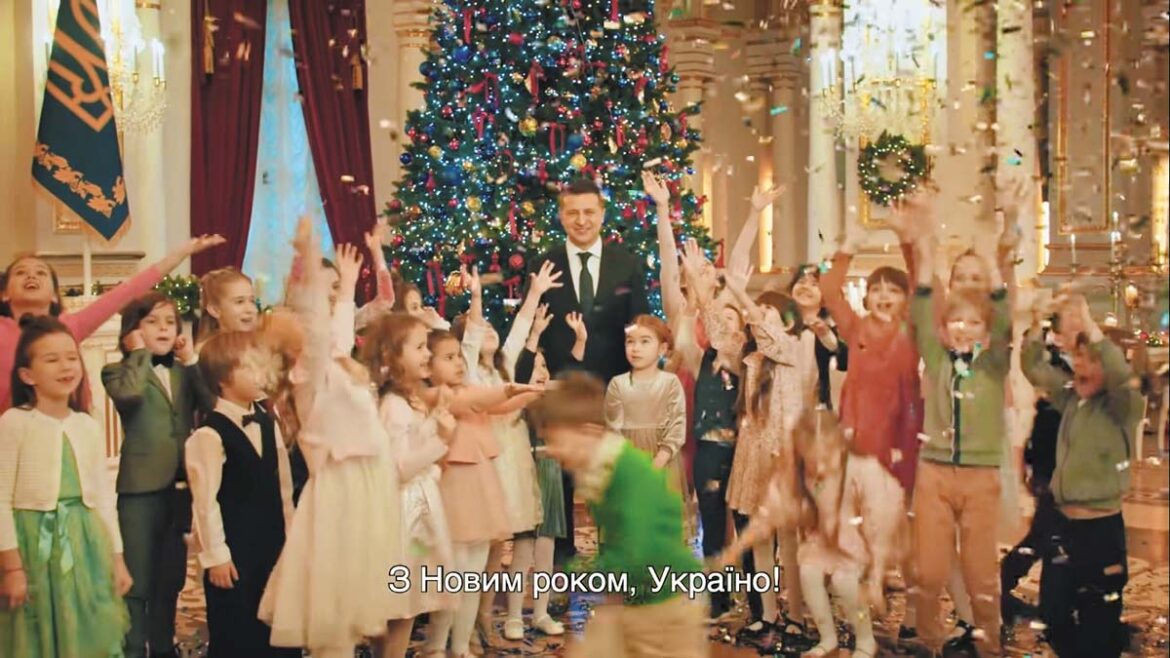 KYIV – In a nearly 15-minute greeting on New Year’s Eve, Ukrainian President Volodymyr Zelenskyy, surrounded by an assembly of children, spoke to the nation on the year’s past accomplishments and challenges, and his plans for the future.

Using the word “we” 22 times and “Ukraine” 14 times, Mr. Zelenskyy emphasized the country’s diversity while switching between the Ukrainian, Russian, Crimean Tatar and Hungarian languages.

“Ukrainians are who they are,” he said. “Not perfect and not holy…but our passport doesn’t indicate whether a Ukrainian is right or wrong. There is no term [in it that says] ‘patriot,’ ‘little Russian’…or ‘Banderite.’”

He concluded the thought by saying the passport holder is a “citizen of Ukraine.”

In a Facebook post, publicist and journalist Vitaliy Portnikov questioned the premise of whether a passport can unite the country, recalling what the document symbolized in the USSR.

“A passport is just a piece of cardboard printed at a printing plant. It does not unite anyone with anyone,” Mr. Portnikov wrote. “Only the country itself can unite [a nation]. Only Ukraine. Only the understanding that it is here and only here that you can be Ukrainian. Speak your language. Be proud of your history. Live on your land.”

In addition to the soldiers holding the line in the Donbas war against Russian-led and Russian-supplied forces, Mr. Zelenskyy said “medical workers, teachers, firefighters and first-responders” are also “super heroes.”

While still speaking of the pandemic, he indirectly took a slight jab at his predecessor, Petro Poroshenko, who is now a member of Parliament and whose two television channels showed Mr. Poroshenko’s New Year’s greeting instead of the president’s.

“In the spring we started to get sick,” Mr. Zelenskyy said. “It turned out that our hospitals and pharmacies didn’t have much. Why?”

Then he used street slang in combination with a pun on words in reference to a tell-tale symptom of COVID-19 and an expression for someone who incorrectly assesses a situation.

The president continued: “It simply is because someone lost their sense of smell long before the [onset of] COVID.”

He lauded a ceasefire in the war that has been in place “for 158 days,” asking the children sitting in front of him if this wasn’t an “impeccable” achievement.

Mr. Zelenskyy didn’t mention that the truce hasn’t quite taken hold and that 56 soldiers were killed last year, including one woman. Overall, more than 14,000 people have died in the Russia-instigated war.

He next touted his administration’s nationwide infrastructure program of building roads and bridges, and upgrading ports.

Alluding to a Soviet-era joke about there being only two problems in the country – stupid people and roads – the president said his team had busted “stereotypes.”

“For example,” Mr. Zelenskyy said, “[some think] that it is impossible to build good quality roads.”

He then proceeded to enumerate that more than 4,000 kilometers of roads had been built “in all four corners of the country,” while adding that 150 bridges were also built.

Mr. Zelenskyy has faced criticism for how the infrastructure project has been partly financed. In November, the Finance Ministry released figures for how the country’s $2.4 billion COVID-19 fund has been used and how much had been allocated as of November 27, 2020.

About 56 percent had been used with only $204 million going toward the construction or renovation of medical facilities and compensation for medical staff. The bulk of the funds – 55 percent – had gone toward road construction.

Mr. Zelenskyy addressed his detractors over the year as “throwers of dirt on the fan of social [media] networks,” inferring that under previous and future presidents, some voters “will be left with posts, and some will be left with bridges.”

Toward the end of his address, Mr. Zelenskyy asked that the residents of the occupied parts of Luhansk and Donetsk oblasts as well as in Russia-annexed Crimea “turn their clocks” back one hour, in reference to the time difference between Ukraine and the time zone in which Moscow is located.

Speaking in Russian, Mr. Zelenskyy said that the Ukrainians in the occupied regions “are living in a different time, in another time, too,” in reference to what many see as an authoritarian, war-mongering neighbour.

“So, Donbas and Crimea, turn back the clock, be with us. Are you ready? We are also,” Mr. Zelenskyy said before the children assembled with him also delivered brief New Year greetings.

He also mentioned that this year Ukraine will celebrate 30 years of independence and that much work lies ahead to improve the country, including the ushering of conclusive peace in the war and his desire to not say that “Crimea is Ukraine on the internet” but to say it “while standing on the sand in Yalta, on Ukrainian sand, on a Ukrainian beach in Ukrainian Yalta.”

Praise and criticism ensued on social media and in blog posts following the president’s greeting, including commentary regarding the unusual format he used in which he addressed the country surrounded by children.

Journalist Kateryna Shumylo said on Facebook that it “was the best and most heartfelt greeting from the president. Strength is in unity.”

Translator Serhiy Lunin wrote on social media that Mr. Zelenskyy spoke to the nation as equals.

Philosopher and translator Oleksiy Panych wrote in a blog that the use of children and the tone and manner in which the president spoke smacked of the “government’s paternalism” and “infantilism” with regard to its treatment of “the nation.”

Mr. Zelenskyy subsequently published separate greetings, lasting around 60 seconds, to each region, including Crimea, on their respective Facebook pages. He spoke in Russian, not Crimea Tatar, when addressing inhabitants of the occupied peninsula.