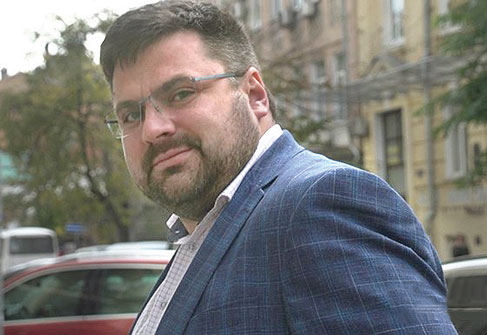 KYIV – On January 27, the Security Service of Ukraine (SBU) said it had secured an arrest warrant for Dmytro Neskoromnyi, a former first deputy head of the agency, on suspicion of conspiring to murder a serving SBU general.

In a news release, the SBU provided video and audio recordings, as well as pictures, as evidence of the alleged plot. The former colonel was allegedly in the process of paying $50,000 for carrying out the murder plot.

The motive, according to investigators, was because the general had been “an obstacle” in Mr. Neskoromnyi’s reinstatement in a high leadership position and “also opposed the appointment of certain members of [Mr.] Neskoromnyi’s former team to the SBU.”

Yet, earlier in the week, the SBU emphasized that the murder investigation is not connected to “infighting” within the agency.
“If there is a crime, we must act on it. And, in this case, the SBU worked to prevent it. And this is the outcome,” Anatoliy Bulich, the head of the SBU’s investigative department, said on January 23 at a joint news briefing with Andriy Lysokobylka of the Prosecutor General’s Office.

The suspected former colonel was pushed out of the SBU in March and had headed the so-called Directorate K, the department that investigates corruption, organized and financial crime.

Mr. Rasiuk, the colonel who currently serves in the SBU’s Alpha anti-terrorist unit, was detained for his alleged role in the plot on January 22. Following a bail hearing on January 23, Mr. Rasiuk was jailed without the possibility of posting bail. If found guilty, Messrs. Rasiuk and Neskoromnyi face between 9 and 15 years, or life, in prison based on the three counts with which they have been charged.

On January 24, Mr. Neskoromnyi released 142 pages of the alleged case materials on Telegram, an online messaging application, a day after the account was created.

The Ukrainian Weekly could not independently verify the authenticity of the Telegram channel in his name or the veracity of the case materials.

“My honorable name is not once mentioned in the case materials,” Mr. Nesko­rom­nyi claimed, voicing his innocence.
The former SBU officer furthermore announced that he will deliver a news conference at the Press Club Brussels Europe on February 2. The press club’s website titled the media event “Shocking factors of corruption in Ukraine: a former high-ranking officer of the Security Service of Ukraine Dmytro Neskoromnyi will talk about the abuses of the country’s high-level officials.”

Mr. Neskoromnyi’s current whereabouts are unknown and the messaging app in his name hints that he is in an EU country.
Meanwhile, the SBU says a search is underway to issue Mr. Neskoromnyi a notice of suspicion and to arrest him.

The information made public by the SBU shows the two suspects allegedly discussing the murder plot, remuneration for the perpetrators who were expected to carry out the crime and surveillance of Mr. Naumov.

The conspiracy started in October before the SBU intervened this month.

In the alleged audio recordings that have been posted on YouTube, Mr. Rasiuk can be heard speaking with an unidentified interlocutor also discussing the assassination and surveillance of the SBU general.

“I need someone to send this guy to the hospital for six months. I’ll show you where he lives and what kind of car he has,” Mr. Rasiuk tells his interlocutor.

In another conversation when discussing surveillance of the alleged target, the interlocutor tells Mr. Rasiuk that the people who will carry out the murder are “not ours, they are not from here [Ukraine]…I brought the guys in from Belgorod [Russia].”.
Then the interlocutor tells Mr. Rasiuk that his “ferryman” will bring a group of people “also from Belgorod on Friday and finish the job on Saturday and get the hell out of here.”

Separately, Mr. Rasiuk then tells his interlocutor that “honestly, it doesn’t make a difference even if the guy [target] croaks. I really don’t mind [if he does], but I need him to be hospitalized for at least six months.”

Mr. Naumov joined the SBU together with current SBU head Ihor Bakanov after the election of President Volodymyr Zelenskyy in 2019. Mr. Bakanov is a childhood friend of Mr. Zelenskyy’s.

In October, the president conferred on Mr. Naumov the rank of brigadier general, a new title in line with Ukraine’s efforts to adopt NATO standards. He previously worked for 12 years at the Prosecutor General’s Office, and prior to that worked in the Chornobyl exclusion zone for a state-run company. The State Bureau of Investigation is currently investigating Mr. Naumov as part of an abuse of office case related to the company’s work in the Chornobyl area.

He was also the subject of an October investigation by Skhemy, a journalism project of Radio Free Europe/Radio Liberty that reported on his assets, including a luxury apartment that his family members had bought for a price that was four times cheaper than its market value.

Ukrainian experts and Western advisers have long urged Ukraine to reform the SBU, which has a reputation for lacking accountability, having too much power and performing roles that either duplicate or overlap those of other law enforcement agencies.

The KGB-successor agency has an estimated staff of 30,000 employees and this year was allocated 15 billion hryvnias ($515 million) from the state budget.

In recent years, NATO envoys, the EU and U.S. have pushed for Kyiv’s political leadership to overhaul the agency. Notably, those organizations called for the SBU to reduce the functions of or abolish department K, whose responsibilities they say should be transferred to other crime-fighting agencies. Instead, they say, the SBU should focus on core tasks, such as locating and detaining Russian agents and spies, countering cyberattacks and safeguarding national security amid a war with Kremlin proxies that is in its seventh year in eastern Ukraine.

As recently as January 28, ambassadors serving in Ukraine from the group of seven industrialized nations – known as the G-7 – tweeted that they discussed reform plans with Kyiv and “emphasized [the] importance of security sector reform,” among other topics.

A reform proposal in 2016 was submitted by some members of NATO and the European Union Advisory Mission in Ukraine (EUAM) to eliminate the SBU’s non-core functions.

These functions of combating organized and white-collar crime, experts assert, are the source of the SBU’s inflated powers and corruption. Numerous investigations by journalists have reported on the lavish estates and premium-class vehicles that the SBU’s high-ranking officers allegedly own.

Moreover, the SBU is only accountable to the president, who appoints the agency’s head with Parliament’s confirmation, and there is weak public oversight over the organization. In addition, SBU officers are exempt from filing yearly asset declarations.
On October 15, 2019, Mr. Bakanov handed the president a legislative bill for reforming the spy agency, but it has only collected dust. After reconvening over the past week following a winter break, Parliament on January 28 adopted the bill in the first of its two readings. Voting favorably with a solid 285 votes, the Verkhovna Rada sent it back to the corresponding legislative committee for further revision.

The complicated bill not only contains amendments to the SBU law, but also foresees changing about 40 other laws that correspond to the agency, such as on counterintelligence activities and civil service.

Its main provisions include taking powers away from the SBU to investigate financial crimes and corruption, Holos party lawmaker Roman Kostenko has said.