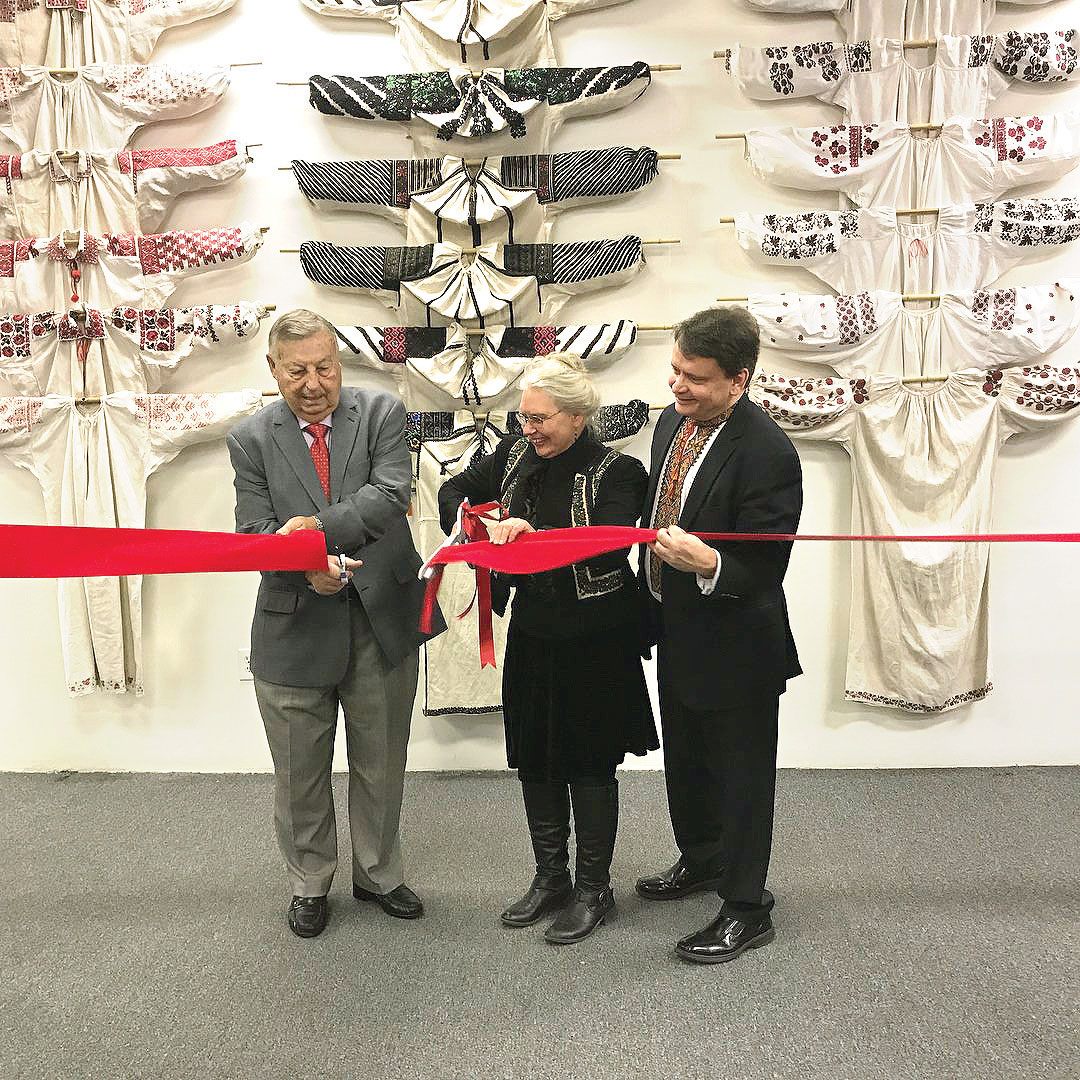 During the ribbon-cutting (from left) are: Dr. Alexander Serafyn, Hamtramck Mayor Karen Majewski and George Stasiw.

HAMTRAMCK, Mich. – Two days of celebration marked the much-awaited grand opening of the Ukrainian American Archives and Museum of Detroit (UAAM) at its new location in the heart of Hamtramck on November 11-12. The spacious museum, containing more than 13,500 square feet, was packed with dignitaries, artists and art lovers, who gathered for the ribbon-cutting and official opening ceremony.

Perhaps Crain’s Detroit Business helped draw in some locals as the museum celebration made the top five in the “10 things to do this weekend” column. In addition, the Hamtramck Review featured an excellent in-depth interview with Dr. Nadia Juzych, co-chair and board secretary.

The list of distinguished guests who came from both near and far to mark the momentous occasion included: Bishop Benedict Aleksiychuk (Eparchy of St. Nicholas, Chicago); Metropolitan-Archbishop Stefan Soroka (Ukrainian Catholic Church of the U.S.A.); the Very Rev. Basil Salkovski, OSBM (provincial superior of the Basilian Fathers in the U.S.A.); the Rev. Pavlo Bodnarchuk (St. Mary the Protectress Ukrainian Orthodox Church), representing Archbishop Daniel Zelinsky, (ruling hierarch of the Western Eparchy and vice-chairman and president of the Consistory of the Ukrainian Orthodox Church of the U.S.A.); the Rev.Volodymyr Petriv (Our Lady of Perpetual Help); Andrew Fedynsky, Ukrainian Museum-Archives (Cleveland); Bohdan Fedorak (honorary consul-general of Ukraine); Yuki Sakai (deputy consul-general of Japan); and Hamtramck Mayor Karen Majewski, who won her fourth term in a stunning victory earlier that week.

Led by Metropolitan Stefan, all the clergy present bestowed a blessing in unison, which was then followed by a rousing rendition of “Mnohaya Lita.” Participating in the ribbon cutting were Mayor Majewski; George Stasiw, board president; and Dr. Alexander Serafyn, honorary co-chair. Dr. Serafyn has long ties to the museum and served a leadership role in earlier years, as did Dr. Mykola Hryhorczuk, the event’s other honorary co-chair.

Opening remarks by Mr. Stasiw focused on the importance of the entire Ukrainian community’s involvement with the UAAM as the museum serves a vital role not only for the Ukrainian community, but for the community at large, by showcasing its unique culture and enduring spirit, and passing this down to future generations.

Mr. Stasiw concluded by thanking Chrystyna Nykorak for her many years of service as executive director and likened her role to that of a “berehynia” or protectress. Ms. Nykorak was then presented with a “berehynia” bronze plaque, sculpted and customized by Barbara Melnik-Carson, co-chair and director. Although Ms. Nykorak recently retired, she continues to work tirelessly on behalf of the UAAM.

All of these proceedings, as well as the beautiful artworks, were captured on video by documentary filmmaker Razi Jafri, who is working together with Justin Feltman on making “Hamtramck, U.S.A.,” a documentary that explores multiculturalism in Hamtramck and how it transforms the community and its residents. 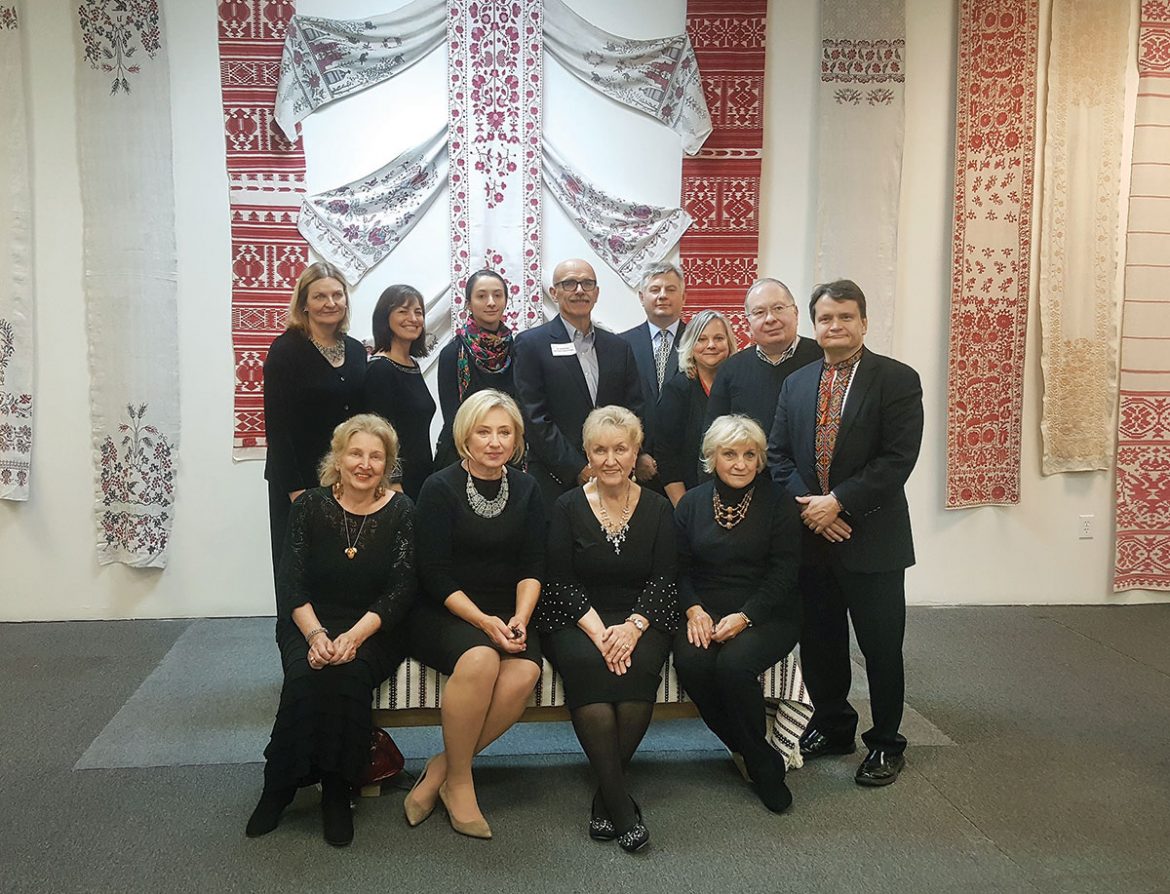 As attendees discovered, there was much to take in. Antique ritual cloths, ceramic vases, embroidered blouses, sculptures, photographs, paintings and pysanky depicting the distinctive style of all regions of Ukraine, as well as diasporan styles, were displayed. Taras Shevchenko’s death mask and a bust of Dr. Mary Beck, the first female president of the Detroit City Council, were part of the exhibit. Dr. Beck was the first Ukrainian American to serve in this capacity and she also served as the acting mayor of the city of Detroit in 1958-1962. Her chair and gavel, as well as some of her telegrams are part of the UAAM’s collection.

The timing of this grand opening could not be better, as 2018 marks the 60th anniversary of the UAAM. Founded in 1958, its origins were in a bank building located on Woodward Avenue in Detroit. The structure was then moved to a corner lot on Charest and Commor Streets in Hamtramck, across from Immaculate Conception Church, where it remained until now.

Roman and Ivanka Dacko later purchased the building and began collecting historical documents, books, paintings, photographs and folklore. Today, the museum houses oral histories from the 1932-1933 Holodomor, oral histories of Auschwitz survivors, the World War II-era Krochmaluk archive, and original photos from the 1986 Chornobyl nuclear disaster. There is a rare document signed by Metropolitan Andrey Sheptytsky, as well as film reels and vintage photos of events, organizations, performances, concerts, etc. Over 25,000 books are available for research and reading.

While the main gallery currently features Michigan Ukrainian artists, a smaller gallery will serve as a gift shop containing a variety of artwork for sale, including hand-painted silk scarves, jewelry, paintings, ceramics and books by Michigan Ukrainian authors.

Many events are planned for next year, including literary readings, classes in icon painting and memoir writing, as well as artists’ exhibits featuring Bohdan Soroka, Halyna Cisaruk, and Eko and Yarema Kozak. The UAAM’s 60th anniversary will be celebrated next October, and the museum’s art and archives will be exhibited over the summer.

For more information about the Ukrainian American Archives and Museum of Detroit, readers may visit Facebook at www.facebook.com/UAAMDetroit. The phone number is 313-366-9764.