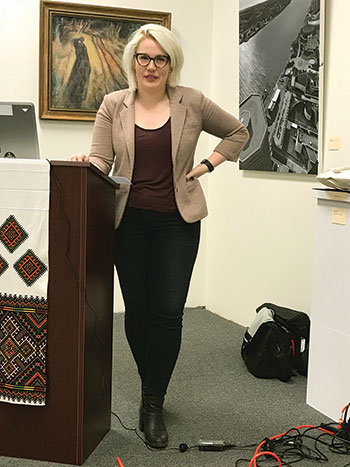 Grace Mahoney during her reading and presentation at the Ukrainian American Archives and Museum in Hamtramck, Mich.

HAMTRAMCK, Mich. – From its earliest oral traditions, poetry has been an integral part of Ukrainian culture – a vital force of its very psyche. In recent times, this was evidenced during the Euro-Maidan when Taras Shevchenko’s poems were recited over loudspeakers, and poets joined in the protests in full force. While the war in eastern Ukraine continues to impact families across the nation as they grapple with grief, trauma, depression and displacement, many contemporary poets highlight and ponder current realities, the nation’s past and what lies ahead. Iryna Starovoyt is one such poet.

On Saturday, March 10, the Ukrainian American Archives and Museum of Detroit (UAAM) presented “Grace Mahoney Reads Iryna Starovoyt’s Poems.” This was a unique bilingual reading of Ukrainian poetry from Ms. Starovoyt’s collection “A Field of Foundlings.” What made it especially compelling was that translator Ms. Mahoney presented the poems side-by-side, first with a video of Ms. Starovoyt reading in the original Ukrainian, followed by the English translation. The result provided an immediacy and intimacy that made it easy to connect to the poetry.

Ms. Starovoyt is a poet, translator, essayist and scholar who was born and currently resides in Lviv. She is also an associate professor in the Department of Cultural Studies at Ukrainian Catholic University. Her first collection of poems, “No Longer Limpid,” was well-received by critics when it was published in 1997. In 2012-2013, Ms. Starovoyt was a research associate on the Memory at War project at the University of Groningen in the Netherlands, where she completed her second collection titled “The Groningen Manuscript.” Her poems have been included in poetry anthologies, set to music, and translated and published into Polish, Lithuanian, Armenian and English. 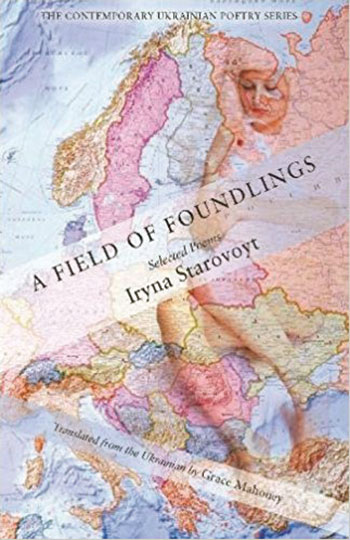 “A Field of Foundlings” by Iryna Starovoyt, translated by Grace Mahoney.

Ms. Starovoyt’s poetry delves into the past of the 20th century, one filled with immeasurable horror for her homeland. She shines the light on generational memories that were suppressed, and only now in recent times are being openly discussed in a new context.

In an interview with Artefact, she stated: “…There were moments in the history of the last century when our cities and villages became the most dangerous places on Earth, where only one out of a hundred survived. The memory of this time was almost completely erased. We now know that this type of collective amnesia is shameful and dangerous.”

In very candid, conversational verse, Ms. Starovoyt draws on mythology, modern technology, history, memory, wordplay, ironies and paradoxes to highlight her thoughts and observations. The result is at times both compelling and surprising. “A foreign land – everything you desire. Until you stop wanting./A homeland – everything you have. Until you stop being/able to cross the ocean by swimming. It collects sweat,/internet cables, and our children’s Cyrillic.”

Through vivid imagery, readers experience the symbolism and deep layers of meaning that resound in her work: “The grass under the scythe is still alive at the roots,/but the stems are left senseless and dead./The grass bleeds green, and can neither speak nor keep silent./Losing their language, words grow in power.”

Ms. Mahoney is a Ph.D student in the Department of Slavic Languages and Literatures at the University of Michigan. “A Field of Foundlings” is her first book of translations. She also writes poetry and has exhibited her watercolor paintings in an exhibition titled “Invisible Women: Portraits of Aging in Ukraine.” The visibility and social role of Ukraine’s older generation of women, embodied in the iconic “babusia” (survivor, nurturer and activist) were explored.

Ms. Mahoney has also attended the Harvard Ukrainian Summer Institute, where she was awarded the Theodosius and Irene Senkowsky Prize for Achievement in Ukrainian Studies. In 2015, Ms. Mahoney received a Fullbright fellowship and spent 10 months in Ukraine. Although she was based in Kamianets-Podilsky, she had the opportunity to travel and meet with various poets and scholars, including Ms. Starovoyt. The decision to translate the Ukrainian poet’s works came about organically.

“I reached out to her to discuss her scholarship and ended up reading, loving and translating her poetry,” said Ms. Mahoney. “We get along really well and have similar styles and artistic sensibilities, so translating her work felt intuitive and organic. She has also been a generous author in the process. She gives thoughtful feedback and supports my decisions – few translators are so lucky!”

Presented in a dual-language format, “A Field of Foundlings” is the first installment of a Contemporary Ukrainian Poet Series published by Lost Horse Press, which is based in Sandpoint, Idaho. This literary series is a partnership between Christine Holbert (founder and publisher of Lost Horse Press) and Ms. Mahoney (series editor), who originally hails from Idaho.

Ms. Holbert has a Ukrainian background and established the nonprofit independent literary press in 1998. For 20 years she has made it her mission to publish books of high literary merit and runs a one-woman show from reviewing and editing manuscripts to book and catalogue design, typesetting, marketing, promotion, etc. The list is endless. Many of the books she has published have won national awards. In addition to running the press, Ms. Holbert is very active in the literary community and has organized creative writing workshops and conferences, literary readings, a statewide book contest, as well as writing workshops for local children.

The Ukrainian Poetry Series will now introduce readers to a diverse group of Ukrainian poets, both emerging and established. The second volume in the series “Songs for a Dead Rooster” by Yuri Andrukhovych, translated by Vitaly Chernetsky and Ostap Kin, will be released this fall.

“A Field of Foundlings” may be ordered by visiting losthorsepress.org and is available on amazon.com.

Since its grand opening last November, the UAAM has hosted several successful events, including “Bohdan Soroka: Artworks,” an exhibit spanning the 50-year career of the Ukrainian graphic artist. His daughter, world-class musician Solomia Soroka, performed at the opening, and Dr. Roman Hryciw spoke about the artist and his work. In February, Dr. Andrew Dzul gave a lecture and visual presentation on “Oleksandr Kaniuka: An Artist’s Story of Survival, Courage and Art.”

For more information about the Ukrainian American Archives and Museum, readers may visit their Facebook page at www.facebook.com/UAAMDetroit.