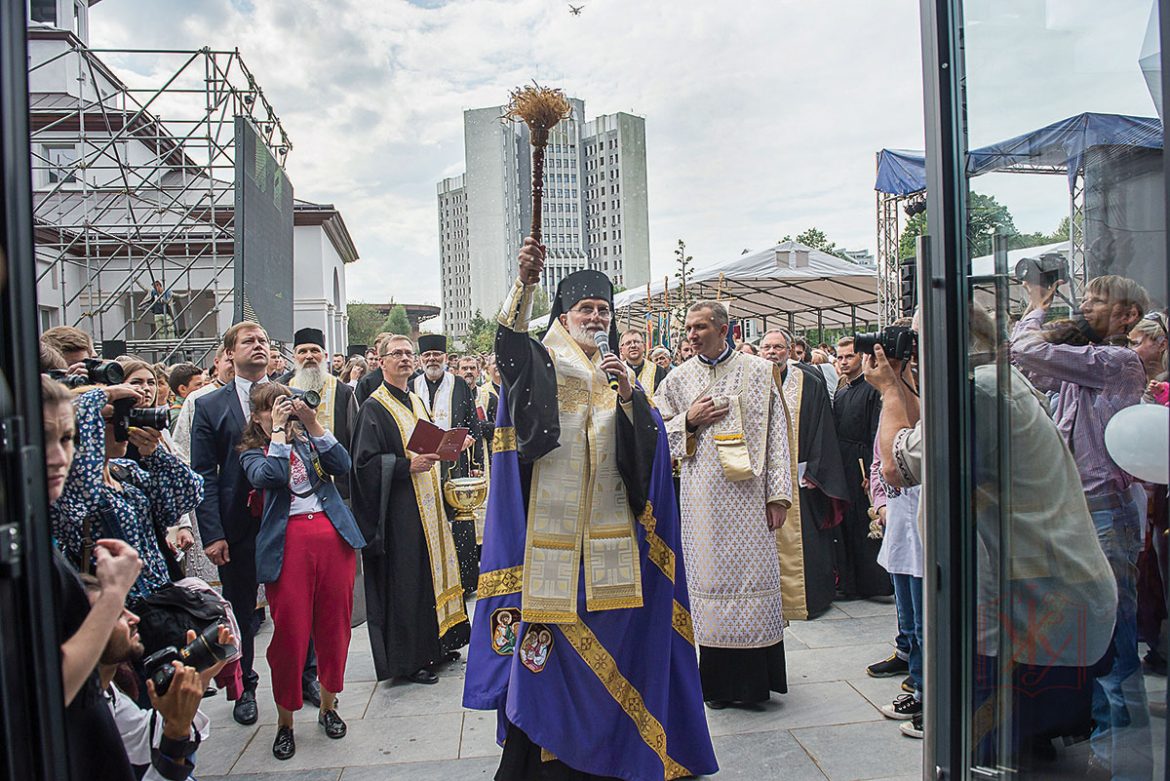 LVIV – The Metropolitan Andrey Sheptytsky Center of the Ukrainian Catholic University (UCU) has opened its doors to visitors. The consecration and ceremonial opening were held on September 10 in Lviv.

It was a celebration not only for the university community. Some 180 friends of UCU from the United States and Canada traveled thousands of miles to share the joy and exaltation and to personally experience this event, significant for all Ukraine.

People, conversations, smiles, greetings and hugs filled all the spaces of the university campus – some looked at the Sheptytsky Center, some went to the University Church of the Holy Wisdom of God for morning prayer, and others met old friends near the UCU Collegium.

The day began with an acknowledgement of the major benefactors of UCU’s Comprehensive Campaign “A New Generation for a New Ukraine” by consecrating a memorial plaque listing donors.

One of the tablets reads: “In gratitude to the thousands of donors of UCU’s Comprehensive Campaign ‘A New Generation for a New Ukraine’ 2010-2016, who by their generosity made possible the creation of this university campus. May the Lord bless all the university’s benefactors!” 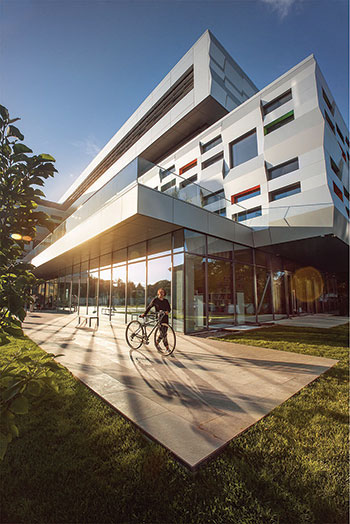 The Metropolitan Andrey Sheptytsky Center on the campus of the Ukrainian Catholic University.

“On this site, according to the plans of the Soviet government, there was supposed to be a Communist building, but it is fitting that here arose something in the spirit of Lviv, but in the 21st century. And today the Sheptytsky Center is here,” noted Bishop Borys Gudziak, president of UCU. “Great thanks to all who helped fulfill the dream of a human campus which will renew God-given human dignity. We bow our heads before the benefactors who have become our family, members of committees, all the people who support us.”

Before sprinkling holy water on the Sheptytsky Center, Bishop Borys noted that the aspergillum he held in his hands was the same one that Pope John Paul II used when, during his visit to Lviv in 2001, he blessed the site where the university campus is now located.

Among the honored guests at the celebration was the main funder of the Metropolitan Andrey Sheptytsky Center, Canadian philanthropist and businessman James Temerty. Bishop Borys presented him with a symbolic key to the center and added: “May this key open not only this building, but hearts.”

Mr. Temerty stated: “It’s a magnificent day. It’s an incredible honor to be here to witness the opening of the Metropolitan Andrey Sheptytsky Center. People come up to me with congratulations and thanks. What can be better than to know that my name and that of my wife, my family, will always be associated with a Ukrainian saint, a human being and hero, Metropolitan Andrey Sheptytsky?”

“This is a very important moment for me and my family today. I was here with my wife, Louise, a few months ago, and when I approached the building, I was a little afraid of what I would see. To that point I was only able to look at photographs. When I came I said to Louise that it’s better than the renders,” he added. 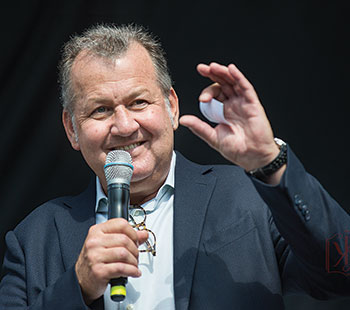 The philanthropist commented that he has been a member of a number of committees to choose architects who are involved with large building projects. “It is rare that the result actually exceeds the promise. Architect Stefan Behnisch has the same mentality as some in my company Northland Power. We under-promise and over-deliver,” said Mr. Temerty. 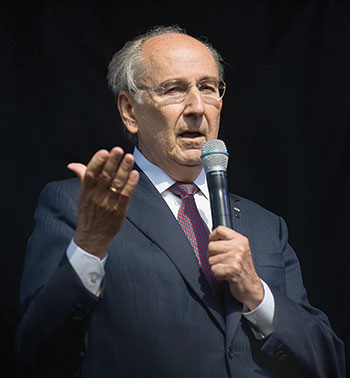 “I think somehow the spirit of that concept got engaged with architect Stephan Behnisch, and he produced this absolutely marvelous building. When you walk around the building, in every other corner the sun shines differently. When you walk a few meters away and then look back, the appearance is again different. Thank you. It is a great honor to be part of what you’ve done,” said Mr. Temerty.

Mr. Behnisch, the main architect of the Sheptytsky Center, stated that he well remembers when his company was asked if it was interested in a proposal to build a library for UCU.

“We agreed, because work for a university, for students, for teachers, brings great satisfaction to any architect,” he said. “Still, one can say much about architecture, its philosophy, but a good university is based on an idea, teaching concepts, and an architect can only help in this matter. And in order to understand how to design such a building, it’s necessary to feel precisely that idea that is the philosophical vision and mission of the university.”

The architect said he is convinced that architectural structures are the defining artifacts that humanity leaves behind. They define our dimension, space and time. “We can avoid many types of art, but architecture surrounds us everywhere and is a reflection of our cultural capacities and possibilities. And so, if we manage to achieve at least some minimal success in reflecting this idea, in reproducing cultural capacities, the space of this city, people and community, I will be boundlessly grateful,” added Mr. Behnisch.

The pride of Lviv and Ukraine

Also among the guests were representatives of the local government. In particular, Lviv Mayor Andriy Sadovyi expressed his thanks to the students who have chosen UCU and said, “I am pleased that the years will pass and we will admire these architectural monuments of the 21st century and understand how important it is to do everything with love.”

The head of the Lviv Oblast State Administration, Oleh Syniutka, commented that the buildings before us are something that Lviv and all Ukraine are proud of. “The strength of our unity is felt in this building,” said Mr. Syniutka. “I hope that, within the walls of the center, Ukrainians will have the opportunity to acquire that knowledge that today is acquired in European universities.”

The former president of the Ukrainian Catholic Education Foundation in the U.S., John Kurey, has supported the university through the seven years of the campaign. He observed: “UCU is a university of high standards and quality education. This university has special significance for the UGCC [Ukrainian Greek-Catholic Church], for the Ukrainian people, and has great influence in Ukraine. Gathered at these ceremonies on the occasion of the opening of the Metropolitan Andrey Center is a wonderful community of people from different backgrounds, various countries and cultures.” 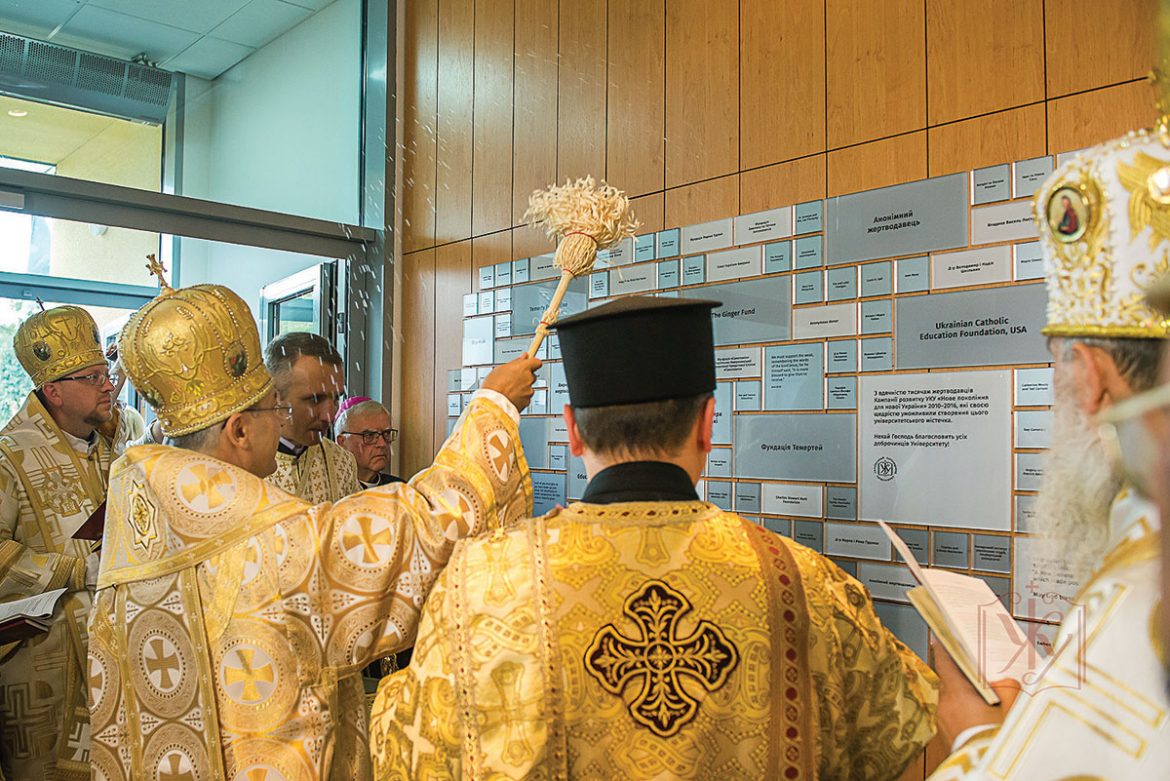 Bishops of the Ukrainian Greek-Catholic Church consecrate the memorial plaque for donors of UCU’s Comprehensive Campaign.

Bishop Borys emphasized: “Work on the UCU project started 25 years ago. This is not a matter of one person but of hundreds of people who sacrificed, supported, and believed. I want to thank the bishops, His Beatitude Sviatoslav, the teachers and students, the widows who gave their mites, the wealthy who gave royal gifts. I thank you all! The Lord is with you all, because we believe that this is possible. This is a conclusion and a new beginning. We need to strive so that those Christian values which Metropolitan Andrey and Patriarch Josyf laid as a foundation be preserved. The university’s community of love is our corporate culture.”

UCU’s Comprehensive Campaign “A New Generation for a New Ukraine” lasted from 2010 to 2016. In seven years the university built a campus: it opened the Patriarch Josyf Slipyj Collegium, an academic building and the University Church of the Holy Wisdom of God. It opened new bachelor’s and master’s degree programs, and new faculties. The culmination of the campaign was the consecration of the Metropolitan Andrey Sheptytsky Center. The center will be a place of innovations and a public platform for experts from various environments.