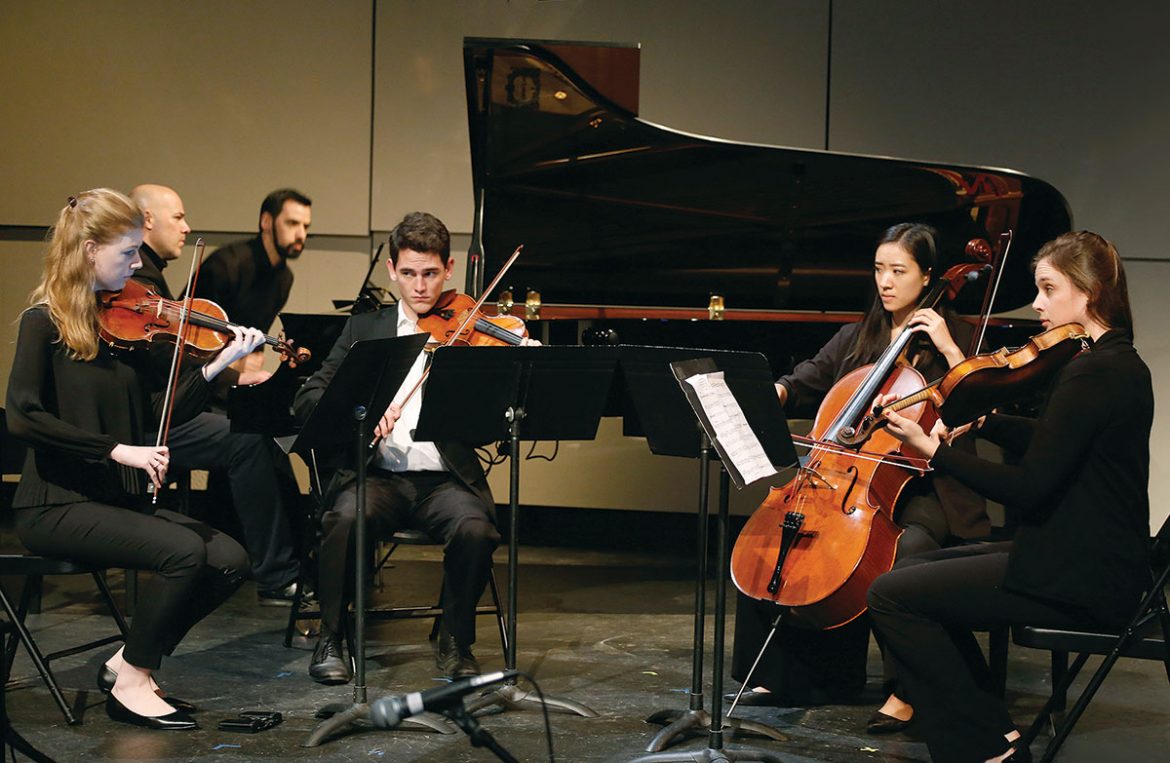 NEW HAVEN, Conn. – On Saturday, December 1, the University of New Haven hosted a very well-attended concert and public forum commemorating the 85th anniversary of the Holodomor and the fifth anniversary of the Maidan Revolution of Dignity. The concert was the brainchild of virtuoso pianist Victor Markiw, lecturer in music at the University of New Haven, and was co-organized with Olena Lennon, adjunct professor of political science at UNH.

The program brought together leading scholars and musicians from UNH, Quinnipiac University and Yale University in a creative collaboration that spawned premieres of several original works by local composers inspired by the tragedy of the Holodomor and the heroism and sacrifices of Ukrainian freedom fighters.

The unique program was based on the premise that music can inspire and speak to the soul in a language that can confront and transcend the incomprehensible. The repertoire included classics, such as Prof. Markiw’s powerful rendition of selections by Sergei Rachmaninoff and the Yale Statera Quartet’s exquisite interpretation of a Myroslav Skoryk concerto. Two contemporary works by Simon Hutchinson and D. Edward Davis were premiered, evocative of the Holodomor’s abject despair, contrasted with the hope and defiance of the Maidan.

The program began with a videotaped greeting from U.S. Sen. Chris Murphy (D-Conn.), a strong advocate for Ukraine’s sovereignty. Dr. Daniel May, provost of the University of New Haven, welcomed the near capacity audience at Bucknall Theater and expressed how deeply gratified he was to have such a historic event held on campus to help raise awareness of the Ukrainian genocide and Ukraine’s continuing struggle for freedom.

This was followed by a premiere performance of an original composition by UNH Prof. Davis titled “Vukho” (Ear). The deeply evocative and mesmerizing work was performed by the Statera Quartet comprising outstanding and award-winning musicians based at the Yale School of Music: Katherine Arndt (violin), Gregory Lewis (second violin), Marta Hrotobagyi Lambert (viola) and Megan Yip (cello), with piano accompaniment by Victor Markiw. As the work began, an overhead screen projected the image of a thick array of wheat ears, reminiscent of the Holodomor Monument in Washington. As the performance continued, almost imperceptibly, the ears of wheat began to thin out and vanish, until just a handful remained on the screen and, finally, none at all.

The string quartet’s performance was followed by remarks from Michael T. Lo Piano, a historian and graduate student at Yale. “Today, we are gathered here in memory of both tragedy and sacrifice … – the tragedy of the Holodomor, the Ukrainian Genocide of 1932-1933 and the sacrifice of the men and women of the… Revolution of Dignity at Kyiv’s Maidan Nezalezhnosti in 2013,” he noted.

Mr. Lo Piano urged the audience to stay vigilant against distortions of Ukraine’s history: “If we stay aware… of the Ukrainian people’s struggle…we can [resist] those who seek…to strip the Ukrainian people of their liberty, exploit them for the wealth of their homeland, and subject them to the evils of their murder and erasure.”

Following Mr. Lo Piano’s remarks, Prof. Markiw performed two preludes, “Fragments” and the “Romance” in F-minor by Rachmaninoff on the piano. Preceding the performance, UNH student Patrick Smith read a heart-rending open letter co-written by Rachmaninoff, Count Ilya Tolstoy and Iwan I. Ostromislensky. The letter, published in The New York Times on January 15, 1931, passionately denounced the atrocities being committed by the Stalin regime.

Andrei Nikitchyuk of Newtown, Conn., a native of Crimea, shared his perspective on Russia’s forced annexation of Crimea. Dr. Maxim Polonsky of Quinnipiac University offered his comments on his home city of Kharkiv, where Vladimir Putin’s attempts to provoke an uprising against the Ukrainian government was effectively blocked with the intense resistance of the local community.

Mr. Nikitchyuk noted that “Ukraine has been victimized by imperialist and totalitarian regimes of different incarnations of the Russian empire for centuries. Only in 1991, with the break-up of the Soviet Union, has the country regained its hard-earned independence.”

The Statera Quartet continued the program with a string quartet version of Ukrainian composer Myroslav Skoryk’s Piano Concerto No. 3 with Prof. Markiw at the piano and Alex Casimiro adding exquisitely subtle rhythmic accents on a concert bass drum.

Prof. Lennon introduced two students from the University of New Haven who were part of a larger group that visited Kyiv last year as part of a study abroad program that included visits to Ukraine, Italy and France.

Matthew Dieckhaus offered reflections on his visit to the massacre site at Babyn Yar, where Nazis executed over 33,000 Jewish residents of Kyiv in September of 1941.

“The Ukrainian people were commemorating the tragedy by not allowing it to destroy them. Rather than tear them apart, the reminder of this event brought them closer together. To me, this was a true testament to the Ukrainian spirit. They had walked through the shadow of the valley of death and emerged on the other side, scarred, but unbroken,” Mr. Dieckhaus commented

Alexandria Caron, a student of national security studies, shared her impressions from visits to the Maidan (Independence Square), where Ukrainians led their non-violent revolution against the autocratic regime of Viktor Yanukovych.

The Yale Russian Chorus was invited to the stage where the ensemble of 20 tenors and basses performed the anthem of the Revolution of Dignity, “Plyve Kacha,” honoring the Heavenly Hundred who were killed in Kyiv when government snipers opened fire on unarmed protesters. The solos were sung by Yale underclassmen Bo Birdsall and Ladislav Charouz.

Alexander Kuzma, the chief development officer of the Ukrainian Catholic Education Foundation, then introduced the song “Zirvalasia Khurtovyna” – a composition by Vasil Vitvitsky that was rearranged for the YRC by Mr. Kuzma. The song describes the anguished moment when a mother bids her son farewell as he marches off to war to defend his native Ukraine. The mother promises her son that she will weave a garland of flowers for his return, but should he not return, she promises to weep quietly out of sight, so as not to shame him with her tears. This scene has been replayed many times over the past four years, Mr. Kuzma pointed out, as more than 10,000 people have lost their lives during the war in the Donbas, as Ukrainians have defended their eastern regions against invading Russian troops, death squads and separatists.

In his concluding remarks, Michael Winkler, a history teacher from Notre Dame High School, commented on the importance of remembering acts of genocide such as the Holodomor and teaching the next generation about the threat of tyranny and the precious gift of democracy.

The program ended with a beautiful musical interlude again performed by the Statera String Quartet – a “Fantasia” composed by UNH composer Mr. Hutchinson based on the melody “Oy khodyt son kolo vikon” – a Ukrainian lullaby that imagines a haunting dream lingering along the windows of a village hut where a mother tries to lull her infant child to sleep.

The concert program reminded the attendees that Raphael Lemkin, the author of the U.N. Genocide Convention who is credited with creating the word “genocide” defined Ukraine’s experience in 1932-1933 as a “classic case” of genocide. In 1953 Lemkin passionately stated: “This is not simply a case of mass murder. It is a case of genocide, of destruction, not of individuals only but of a culture and a nation.”

Prof. Lennon thanked the audience for its attendance and warm reception, and invited Father Iura Goudenchuk, pastor of St. Michael Ukrainian Catholic Church in New Haven, to deliver a final blessing. Fr. Goudenchuk urged the audience to pray for Ukraine and its people, and all those who have suffered from persecution and genocide.

The December 1 program was made possible with a generous sponsorship from the Office of the Provost, and the Henry C. Lee College of Criminal Justice and Forensic Sciences.

Anyone interested in organizing similar concerts or programs at other universities is urged to contact Prof. Markiw atvmarkiw@newhaven.edu, or Prof. Lennon at olennon@newhaven.edu.