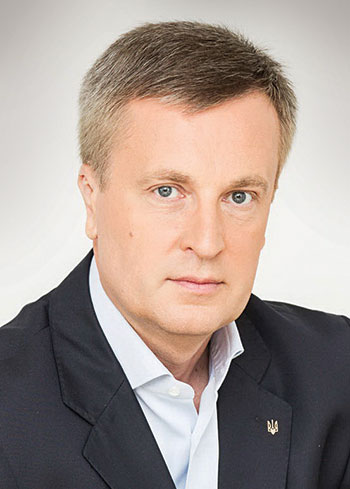 The conflict over Mr. Nalyvaichenko was the biggest since the coalition government emerged in November 2014 and threatens its future stability. The president will likely appoint someone loyal to him to replace Mr. Nalyvaichenko in order to strengthen his hierarchy of power, observers said.

“The new SBU head will be very loyal to Poroshenko. He didn’t force Nalyvaichenko’s dismissal so that just anyone would take his place, or at any rate someone who wouldn’t call himself one of the president’s men,” said Yevhen Magda, the director of the Center for Societal Relations in Kyiv.

Mr. Nalyvaichenko took over as SBU head on February 24, 2014, as part of the interim government that came to power after the flight of former President Viktor Yanukovych. He was not replaced by President Poroshenko when he was elected in June of last year, though selecting the SBU head is within the president’s authority.

“Poroshenko knew Nalyvaichenko but he had no issues and he suited him well at the time,” said Petro Oleshchuk, a political science lecturer at Shevchenko National University in Kyiv. “Nalyvaichenko was with [Vitali] Klitschko and they were all part of one team. It’s also possible that keeping Nalyvaichenko was one of the demands placed by [Dmytro] Firtash on Poroshenko.”

It’s now well-known that Mr. Firtash, among Ukraine’s biggest oligarchs, met with Mr. Poroshenko and Mr. Klitschko, the chair of the Ukrainian Democratic Alliance for Reform (UDAR), in Vienna in late March 2014 to forge a political union between the two popular politicians.

As a result, Mr. Klitschko didn’t run against Mr. Poroshenko for the presidency and instead became the chair of the Kyiv City Council (mayor).

Mr. Firtash thus gained influence over the Kyiv mayor’s office through Mr. Klitschko, and the SBU through Mr. Nalyvaichenko, both of whom are widely reported by political observers to be loyal to the nation’s biggest natural gas trader.

Yet relations between Messrs. Nalyvaichenko and Poroshenko turned for the worse when Mr. Firtash became a target of the president’s deoligarchization campaign, Mr. Oleshchuk said.

Although the state actions against Mr. Firtash and his assets were largely carried out by Internal Affairs Minister Arsen Avakov, a member of the People’s Front party who is loyal to Prime Minister Arseniy Yatsenyuk, Mr. Firtash has also been affected by the decisions of the president and his loyal prosecutors.

For instance, the president on April 20 signed the law on the natural gas market, which forced Ukraine’s natural gas distribution companies, most of which are owned by Mr. Firtash, to pay rent for using the state’s network of pipes, to which they previously had free access.

At that point, it became apparent to the president that Mr. Nalyvaichenko, who has reportedly been aligned with Mr. Firtash for at least three years, would place the oligarch’s interests above his, observers said.

“Firtash’s conflict with the president certainly influenced the dismissal of Nalyvaichenko as it fomented mutual distrust,” Mr. Oleshchuk said.

With the noose tightening, Mr. Nalyvaichenko decided in June to pursue some anti-corruption measures in order to cast the image of a fighter for good, chased away by corrupt elements, as a launching pad for his potential political career, Mr. Oleshchuk said.

Some of these maneuvers were designed for the media, but all of them were targeted at those loyal to Mr. Poroshenko. And Mr. Nalyvaichenko made them after meeting on June 10 with Mr. Poroshenko, who offered him the post of head of the SBU’s Foreign Reconnaissance Department, Serhiy Leshchenko of the Poroshenko Bloc told Hromadske TV in a June 17 interview.

Yet on June 12, Mr. Nalyvaichenko decided to announce at a roundtable event in Kyiv that he had dismissed the directors of the SBU’s Anti-Corruption and Organized Crime Administration, including its first deputy head, Yurii Artiukhov, who was identified by the insider.ua news site as being loyal to Mr. Poroshenko.

The same evening, Mr. Nalyvaichenko went on the “Shuster Live” talk show – broadcast by the Inter television network reported to be controlled by Mr. Firtash – to accuse an unidentified former deputy prosecutor general of taking bribes from the owners of an allegedly illegal gasoline storage facility outside of Kyiv that exploded and burned for a week.

He also said he filed criminal charges for “ecocide” in relation to the gasoline storage base fire.

“The last straw for Poroshenko was when he aired dirty laundry on the Shuster show,” Mr. Oleshchuk said. “He never made such public scandals in the past. The president sets a firm line and never liked those who tried to play their own political game.”

On June 14, Mr. Nalyvaichenko was notified that his June 16-17 visit to the U.S. was canceled. He was supposed to speak before members of the U.S. House of Representatives and meet with high-ranking officials.

On June 15, Mr. Nalyvaichenko identified the accused prosecutor as Anatolii Danylenko, who was dismissed in February after he stood accused of corruption. (Two days later, the owner of the gasoline storage facility accused Mr. Danylenko of trying to conduct a corporate raid on the company.)

Mr. Danylenko is a “kum” (parent of a godchild) to Vitalii Yarema, who was Mr. Poroshenko’s procurator general before leaving in February after mounting public dissatisfaction.

On the night of June 15, Mr. Poroshenko called a meeting of the Poroshenko Bloc to vote in favor of Mr. Nalyvaichenko’s dismissal, reported pravda.com.ua, citing an anonymous source in the parliamentary faction.

The same night, Mr. Klitschko tweeted that the UDAR party members who are part of the Poroshenko Bloc parliamentary faction would not support the dismissal vote.

At that point, it became apparent that the Vienna pact between Messrs. Poroshenko and Klitschko was over and that the two politicians, and their respective political parties, were now competitors, Mr. Leshchenko said. “It was obvious to me that Firtash used his ties in the SBU to resolve his corporate conflicts,” he told Hromadske TV.

In the days leading to the vote, Mr. Leshchenko led a campaign on his Ukrayinska Pravda blog and Facebook page to expose Mr. Nalyvaichenko as an agent of Mr. Firtash, an alliance he said began as early as 2009. As late as last year, Mr. Nalyvaichenko acted to prevent an American businessman from entering Ukraine to defend against a corporate raid by Mr. Firtash, Mr. Leshchenko alleged.

Leading up to the dismissal vote, Mr. Nalyvaichenko denied any involvement with Mr. Firtash’s business schemes.

Yet it seems to most political observers that the conflict surrounding Mr. Nalyvaichenko is merely the latest chapter in the power struggle among Ukraine’s oligarchs, including Mr. Poroshenko himself, who will be seeking to take control of the SBU and will have to muster enough votes in the Verkhovna Rada to do so.