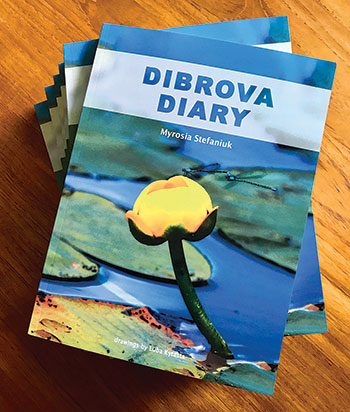 Nearly 150 people from near and far gathered to celebrate the much-awaited publication of Ms. Stefaniuk’s memoir about the rustic woodland named Dibrova, which was purchased in 1954 and has served as a summer haven for five generations of Ukrainian immigrants.

From Plast camps at the Zelenyj Yar campground to soccer and volleyball tournaments organized by the Chernyk sports organization, Dibrova’s role as meeting place and pristine natural refuge provided the metro Detroit Ukrainian community with a beloved second home. This rich history provided the impetus for “Dibrova Diary,” which contains stories, legends and personal anecdotes interwoven with poetry and fascinating facts about the nature all around.

As noted on the back cover, “Myrosia Stefaniuk’s memoir is the universal story of refugees and displaced people who search for stability and kinship in a place where they can connect with nature and feel at home although separated from their ancestral land.”

Catherine Kizyma, Branch 96 co-president, kicked off the event and introduced the author, reiterating that not only is the book special for Ukrainians but it can be adapted by any ethnic group seeking a quiet reprieve from daily chores and troubles among friends and family. 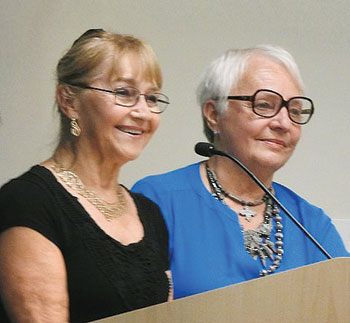 “Myrosia Stefaniuk is a longtime active member of our community and the UNWLA,” said Ms. Kizyma. “She was born in Ukraine and after fleeing her homeland to escape Soviet occupation and living in displaced persons camps, emigrated with her family to the U.S., where they settled in Michigan. Growing up as a member of a strongly ethnic Ukrainian community, she felt like an outsider who didn’t really fit in. Writing became a way of seeking understanding, meaning and awe in the mystery of nature and the universe. As a result, we have before us a woman who devoted her energies and contributions to writing, teaching and translating. Her works include books such as the poetry and prose anthology ‘At The Edge of Mirror Lake’ and ‘Ukrainians of Detroit.’ She was a contributing editor to ‘Ethni-City: Guide to Ethnic Detroit,’ and has translated many poetry and prose collections from Ukrainian to English, which were published in magazines, newspapers and anthologies.”

After this introduction, Ms. Stefaniuk took the podium and began by thanking her family and all those involved in the making and promotion of the book. Her sister Ms. Kytasta’s drawings vividly capture Dibrova’s varied landscapes and the creatures that reside there. The striking cover photos, production design and layouts were the work of her daughter Marta Stefaniuk.

The author then discussed her journey in writing “Dibrova Diary.”

“Dibrova has been a special place for many people, not only from this area, but from areas well beyond it. For over 60 years, Ukrainian immigrants have gathered there at picnics, festivals, camps, sports events, family celebrations and bonfires. Today, there are only a handful of folks that still remember how it all began and what it took to make it such a summer haven for so many,” she noted.

But, as Ms. Stefaniuk pointed out, Dibrova’s story began even before Plast members arrived on the scene and purchased the land with the lake. She decided to trace the estate’s history to its earliest beginnings, reaching back to Native Americans, then the first homesteaders in the 1800s and everyone who followed. The first section of the book details these stories. After the land passed into Ukrainian hands, the Plast and Chernyk organizations were instrumental in the development and growth of the estate. 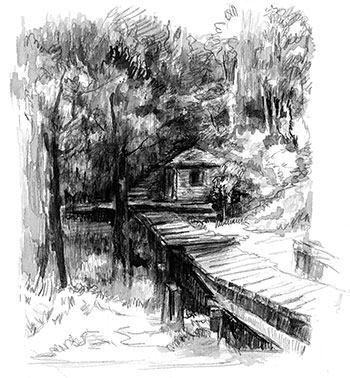 Illustration depicting the way down to the “Big Dock” by artist Luba Kytasta.

The magic of Dibrova, however, has always centered on its untamed beauty, spring-fed lake, vegetation, and vast variety of flora and fauna. The author poetically describes “the velvet softness of moss, sand and mud between my toes, the sting of nettles and burrs, itch of poison ivy, the invigorating silk of the lake waters.”

In addition, Ms. Stefaniuk translated segments from two Ukrainian-language books about the estate (“Liublu Dibrovu” and “Charivna Dibrova”) that were published in 1959 and 1964. Written by Dr. Sofia Parfanowych, a remarkable medical pioneer and ecologist, the passages eloquently describe her astute observations of Dibrova in its earliest stages.

Ms. Stefaniuk concluded her comments by focusing on the future role for Dibrova in the Ukrainian community: “I wrote this book not only to preserve memories of the past – but to invite the current Ukrainian community, especially young families, to treasure this legacy and keep it alive for future generations – with the hope that Dibrova will always be a special place, one where community, traditions and Ukrainian identity will have a safe harbor and home.”

The audience was then treated to a reading, followed by a question-and-answer session, which touched upon future goals for the estate. The evening officially concluded with closing remarks by Marta Kwitkowska, Branch 96 co-president. Unofficially, however, attendees lingered long afterward, to get books signed by the author, partake in the delicious treats that were provided and reminisce about good times at Dibrova.

For more information about “Dibrova Diary,” readers may visit the website at www.dibrovadiary.com or order books via e-mail from Myrosia@dibrovadiary.com.