The Women’s Bandura Ensemble with the Ukrainian Bandurist Chorus during their joint performance in Detroit.

A new star emerged on the horizon of the Ukrainian diasporan cultural stage as the newly formed Women’s Bandura Ensemble of North America (WBENA) presented its first concerts in Detroit and Cleveland, at Wesleyan University in Middletown, Conn., and at St. John the Baptist Ukrainian Catholic Church in Whippany, N.J., between October and November.

The ensemble of 21 female vocalists and bandura players received rousing applause and standing ovations in all four venues where they appeared, firmly establishing themselves as an exciting new group on par with other renowned bandura ensembles.

On October 29-30, the WBE performed in a joint concert with the famed Ukrainian Bandurist Chorus in Detroit and Cleveland, presenting its own all-female repertoire as well as several selections with combined male and female choruses. At Wesleyan and Whippany, the WBE performed an exclusively all-female program and dazzled the audiences with its versatility and professionalism.

Each concert began with an a cappella outburst of the popular folk song “Oi Na Hori L’on” (“On the hillside, the flax grows”) with soloists Alina Kytasty Kuzma and Roxolyana Shepko. Next, the ensemble sang the sacred hymn “Pid Tvoyu Mylist” (Beneath the Mantle of Thy Mercy) by Dmytro Bortniansky, arranged by one of their own, soloist Lesya Klimchenko. Opening with these two contrasting selections perfectly highlighted the group’s vocal abilities and artistry.

This ambitious new initiative was launched through the efforts of Irene Kytasty-Kuzma, a long-time instructor at the Kobzarska Sich music camp at the All Saints Ukrainian Orthodox campground in Emlenton, Pa. Nearly two generations of women have received instruction at the camp, as well as similar programs in London, Ontario, and the Bobriwka campground in Colebrook, Conn., or at workshops around North America.

However, unlike their male counterparts, who could aspire to join the Ukrainian Bandurist Chorus or the Canadian Bandurist Capella, women instrumentalists had few opportunities to cultivate their skills or to perform in a larger ensemble. In 2015, the WBE began to take shape under the direction of professional choral directors Oksana Rodak of Chicago and Oksana Zelinska, director of the Zoloti Struny ensemble in Toronto. 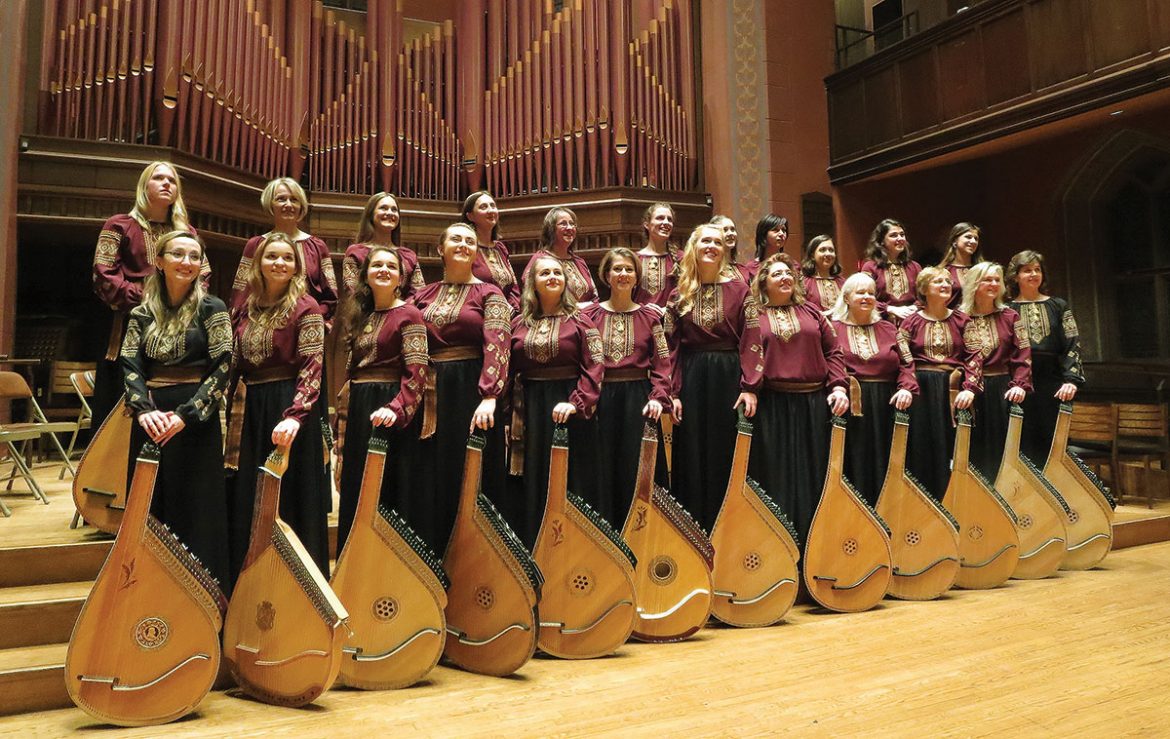 The Women’s Bandura Ensemble of North America at its concert at Wesleyan University.

In their four debut concerts, the WBENA demonstrated a remarkably rich choral blend and dynamic range and powerful harmonies, as well as delicate instrumental nuances. Their program alternated seamlessly between passionate laments such as “Vyrostesh Ty Synu” (“When you grow and leave home, my son”), to Myroslav Skoryk’s evocative instrumental “Melody” and lighthearted folk songs such as “Whatever you do, daughter, do not marry a musician!” The ensemble also impressed its listeners with intricate instrumental arrangements of Simon and Garfunkel’s “Scarborough Fair” and Hryhory Kytasty’s haunting “Echo of the Steppes.”

In addition to their large ensemble pieces, women from the East Coast, Toronto and Chicago were able to perform selections in quartets or smaller ensembles, lending a rich diversity to the program. Each concert ended with Oleh Mahlay’s brilliant arrangement of “Vohon” (Fire) – a selection from a cycle of lush and boisterous ritual songs from the summer solstice festival of Ivan Kupalo, featuring violin and drum by sisters Roxolyana and Zoya Shepko.

Each performance drew large and enthusiastic crowds. The concert at Wesleyan University’s Memorial Chapel on November 19 attracted faculty and students, as well as a large contingent of visitors from as far away as Stamford, Conn., New York City, Long Island and Rhode Island. Wesleyan has developed a strong program in ethnomusicology and World Music, making this a perfect setting for presenting the bandura to a wider, more eclectic audience.

On the following day, November 20, the New Jersey concert tapped into the beautiful acoustics of St. John’s Ukrainian Catholic Church in Whippany.

Concert-goers hailed the ensemble as a major development on the North American Ukrainian music scene:

“It didn’t even sound like voices and instruments,” said Dr. Katja Kolcio, professor of dance and environmental studies at Wesleyan: “It sounded like water floating through the air. It was the most heavenly sound that I could ever imagine… It’s a historic event …with what’s happening in Ukraine and with what’s happening in U.S., it couldn’t have happened at a more important moment in history.”

Another concertgoer, Mykola Chudoba raved: “This was truly amazing and awe-inspiring. I had heard ‘Homin Stepiv’ performed before, but this rendition sent chills up my spine.”

In Whippany, parishioner Helena Mazur said: “Their voices blended so beautifully, the sound was just really outstanding, you could stay forever and listen to them. Everybody should do themselves a favor, that is if you find that they are in your area – go, because you are doing something good for yourself!”

The implementation of such an ambitious new musical collective requires the generous support of sponsors and kindred spirits. The WBENA expressed deep appreciation to the Ukrainian Bandurist Chorus for their encouragement and cooperation, as well as to several financial sponsors that helped cover the costs of travel and publicity.

The WBE is next scheduled to perform a concert in Philadelphia on February 26 at Manor College. For further information, or to hear excerpts from these concerts, readers may visit the WBENA website, www.banduristka.org. More information is available also by e-mailing banduristky@gmail.com. 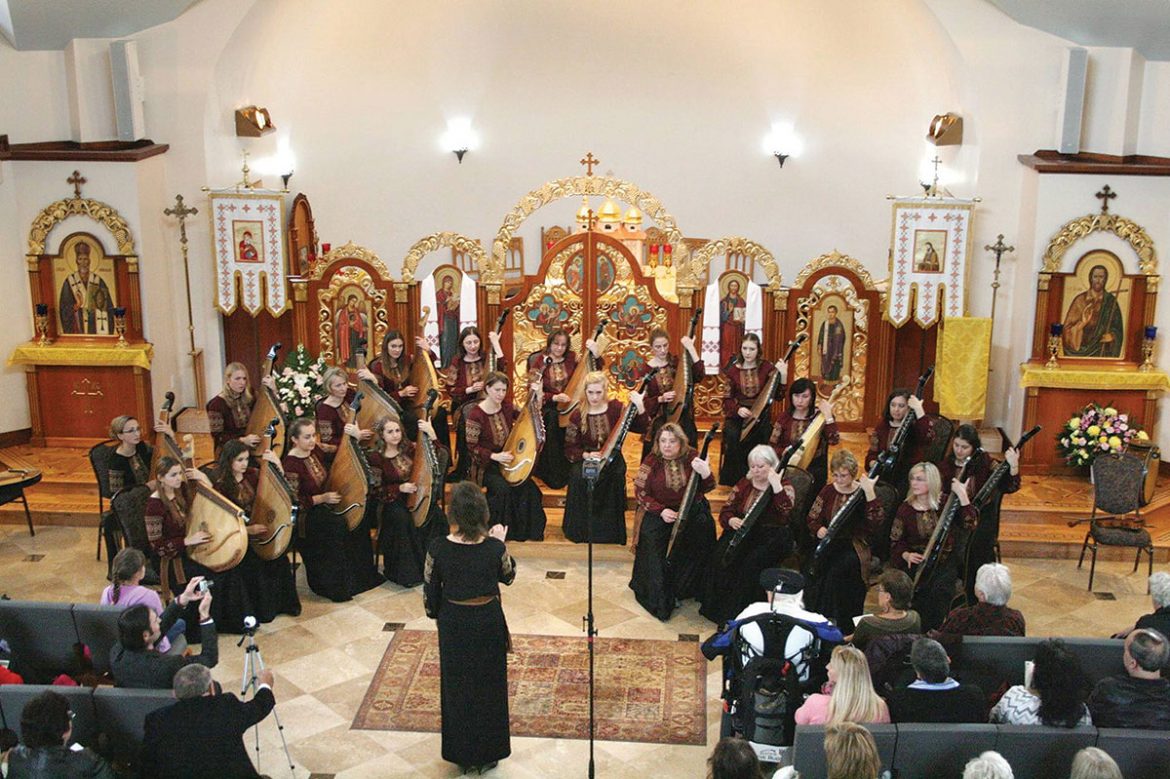