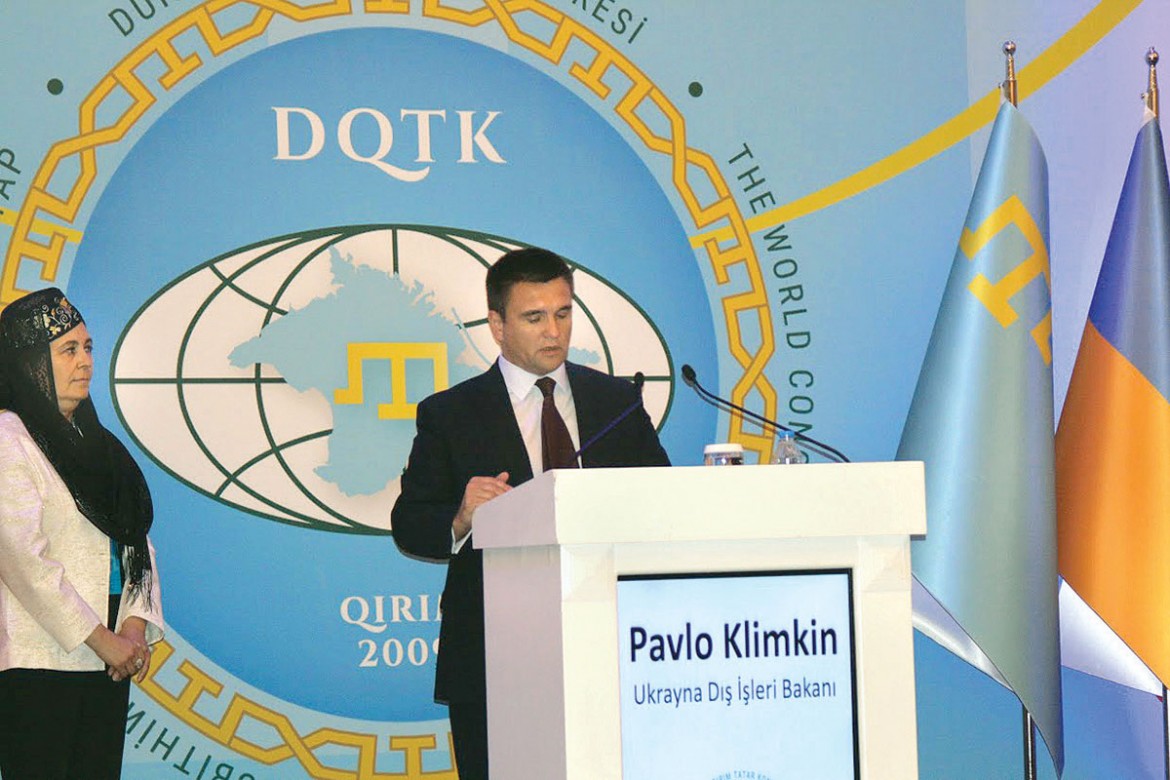 ANKARA – Over the weekend of August 1-2, with their indigenous homeland under occupation, the second World Congress of Crimean Tatars – Dünya Qırım Tatar Kongresi – was forced to gather outside Crimea, in Turkey, the country with the largest Crimean Tatar diaspora population. The congress took place in the Turkish capital of Ankara.

When the first World Congress of Crimean Tatars convened in Symferopol, Crimea, in May 2009, more than 800 delegates from 12 countries and 160 NGOs attended that historic homecoming. This world congress attracted 184 Tatar groups from 12 countries, representing some 200 Crimean Tatar organizations. The total of 410 registered delegates, 80 invited guests and 110 additional attendees, while smaller in number than the first congress, defied organizers’ expectations, as Russia had mobilized all of its best efforts – from threatening Crimean Tatars living in occupied Crimea, to setting up a rival Crimean Tatar body it could control, to applying diplomatic pressure on the Turkish government – all to prevent the World Congress of Crimean Tatars from meeting at all.

According to congress organizers, Crimean Tatar organizations from Ukraine, Kyrgyzstan, Kazakhstan, Canada, Lithuania, Poland, Russia, Romania, Turkey, France and other European countries were represented, with over 200 attending from Ukraine. Notably, Uzbekistan, with a Crimean Tatar population of approximately 200,000, did not send any delegates to this second congress. 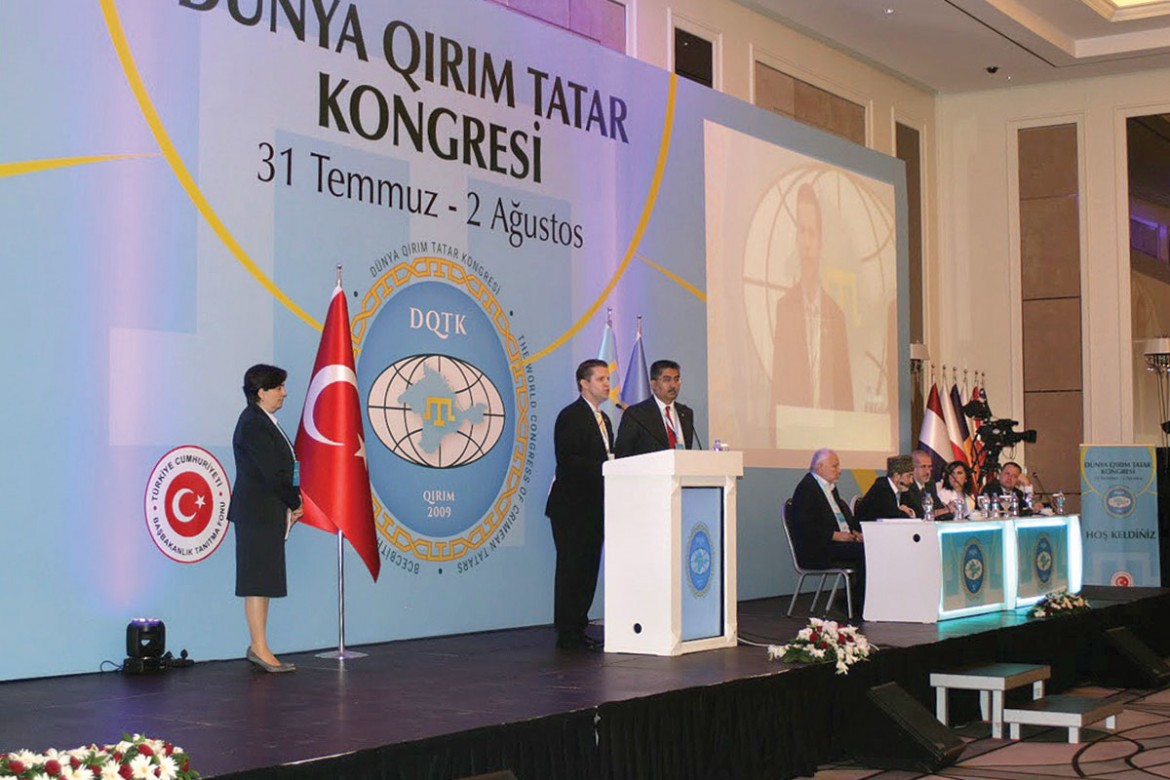 One of the invited guests who addressed the congress was this writer, Andrij Dobriansky, executive board member of the Ukrainian Congress Committee of America (UCCA), the nation’s largest representation of Americans of Ukrainian descent. As the sole representative of Ukrainian diaspora organizations to attend, I was afforded every opportunity to meet with Crimean Tatars from around the world, many of whom were both fluent speakers of the Ukrainian language and students of Ukrainian history and culture. With UCCA representatives having attended several community events with the Crimean Tatars in New York and Washington, as well as having arranged meetings for Crimean Tatar leaders with U.S. officials and the press, the partnership with the UCCA was a natural choice.

In addressing the delegates and presidium, Mr. Dobriansky once again “called on our president and our leaders in the U.S. House and Senate to put aside political differences and stand together with all the people of Ukraine, to further military cooperation with Ukraine and enact sectoral sanctions against Russia.” He further added, “To our Crimean Tatar brethren, we wish you great success in achieving your congress’s resolutions, firm in our belief that through our combined efforts we will see the congress return to the Crimean Tatars’ indigenous homeland in the future.” 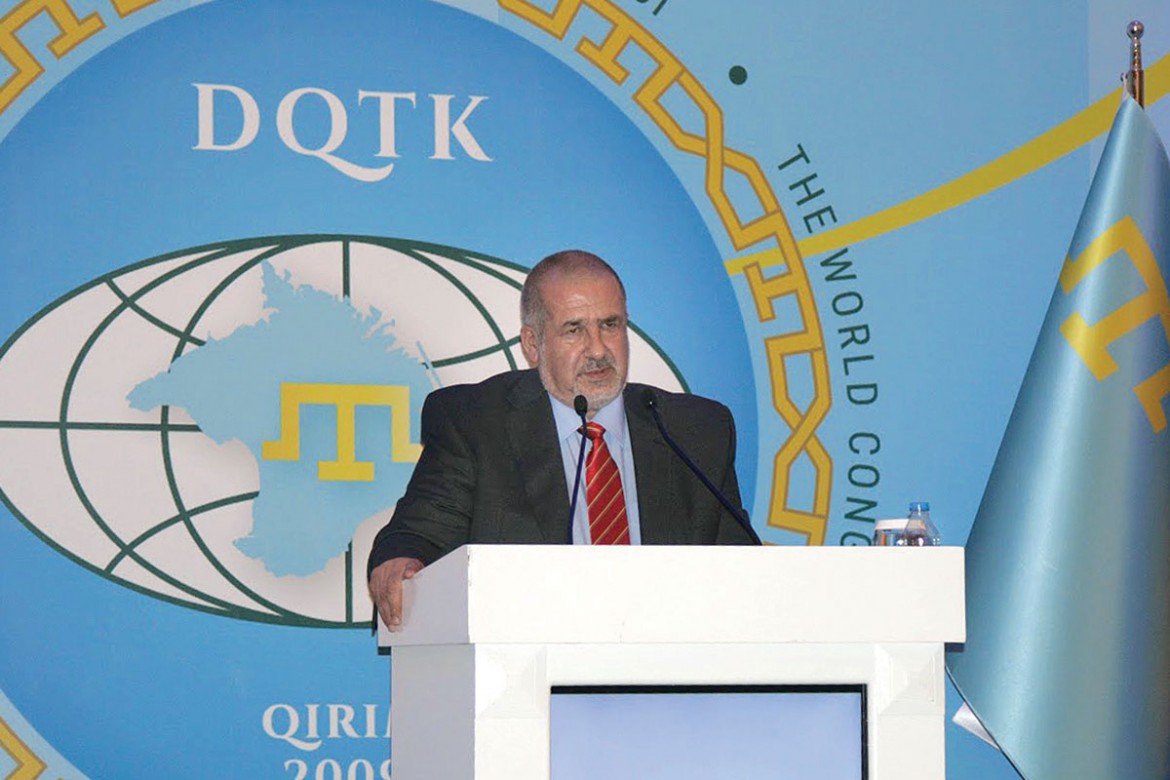 The president of the World Congress of Crimean Tatars, Refat Chubarov.

The congress began with Friday arrivals in Ankara. It was a mix of longtime friends reuniting and an opportunity to exchange news on who had made it out of Crimea. One of the first attendees greeting Mr. Dobriansky at the hotel was Sinaver Kadyrov, a Crimean Tatar activist who refused to accept Russian citizenship, and as a result became the first official Crimean Tatar deported during the Russian occupation.

The next morning, the ballroom of the Bilkent Hotel and Convention Center was teeming with international press as attendees raucously applauded the entrance of Ukrainian Foreign Affairs Minister Pavlo Klimkin; the leader of the Tatar National Movement and the chairman of Assembly of Crimean Tatar People, Mustafa Dzhemilev; the head of the Crimean Tatar Mejlis, Refat Chubarov; Deputy Speaker of the Turkish Parliament Naci Bostanci, and Turkish Deputy Prime Minister Numan Kurtulmus.

As the delegates remained standing, the strains of “Ant Etkenmen,” the Crimean Tatar national anthem began, followed by boisterous renditions of both the Ukrainian and Turkish national anthems.

After an opening prayer, Chairman Chubarov began the protocol of addresses by stating that, “The first condition in order to achieve world peace, and peace among the people of Crimea, is to end the occupation of our homeland.” 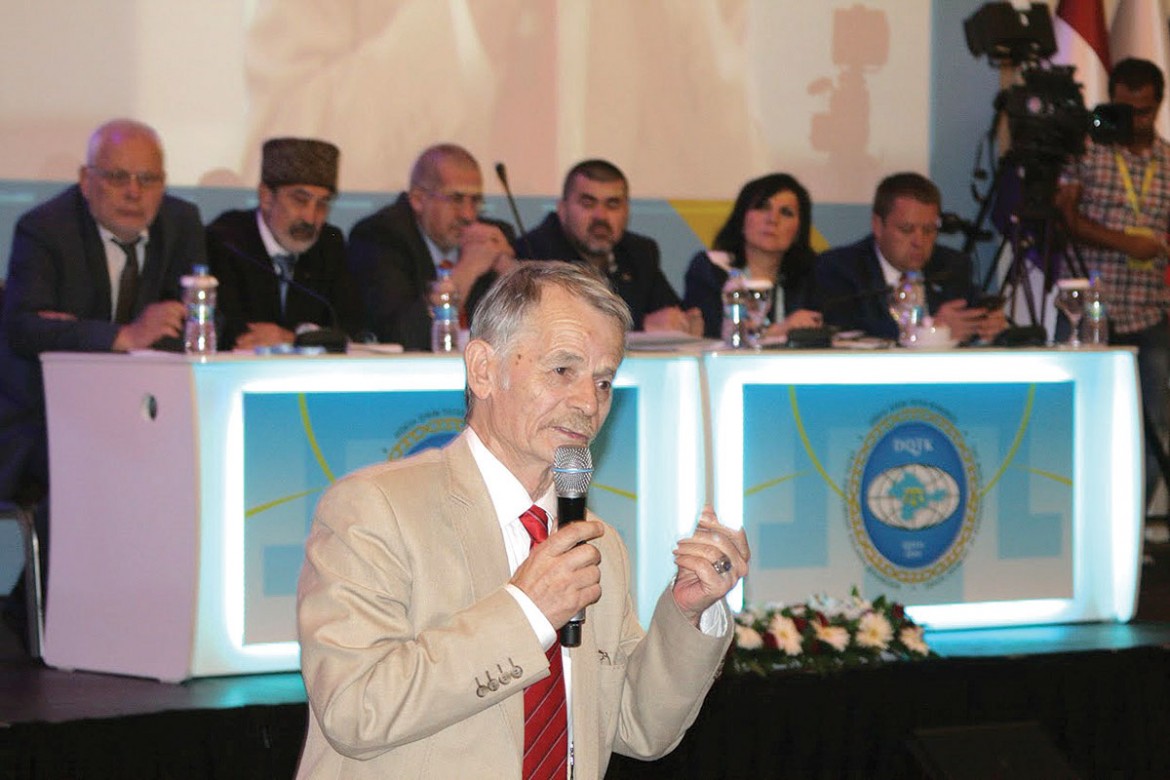 Veteran leader of the Crimean Tatars Mustafa Dzhemilev speaks during a congress session.

Minister Klimkin followed that statement by declaring that the so-called annexation of Crimea in March 2014 “is temporary – because it is illegal.” In a prepared statement read by Mr. Klimkin, Ukraine’s President Petro Poroshenko affirmed that “Ukraine will never in any circumstances accept the violation of the rights of the Crimean Tatar people to live freely on their own land.” Ukraine, together with its international partners, “will devote all its efforts to restore legality on the peninsula and the return of Ukrainian power to Crimea.”

The president’s statement to the congress closed with a mention of the road map being prepared by government and Crimean Tatar officials, which would confer the status of national-territorial autonomy within the Ukrainian state to the “historical motherland of the Crimean Tatar people.” Mr. Poroshenko’s statement was one of the most powerful of the session, eliciting a standing ovation and cries of “Slava Ukrayini! Slava Krymu!”

In perhaps the most moving address to the congress, Nariman Dzhelyal and Ilmi Umerov of the Crimean Tatar Mejlis, along with Zair Smedlyaev, the first deputy head of the Mejlis – and highest-ranking remaining Tatar leader in Crimea since Russia banned Messrs. Chubarov and Dzhemilev from returning to Crimea – addressed the congress in a pre-recorded video message. They had been prevented from leaving Crimea.

As attendees listened in stunned silence, the Tatar leaders explained that Russia’s policy of armed intimidation has resulted in Crimean Tatars fearing for the safety of their families and loved ones in their native land. Russian officials in Crimea made clear to the entire Crimean Tatar population remaining on the peninsula that anybody who left to attend the World Congress would likely not be allowed to return or could be prosecuted for “extremism” if they sign on to any declaration that Crimea is not legitimately part of the Russian Federation.

“Russian authorities are putting pressure on us and we are not being allowed to leave Crimea, but we do not want to remain cut off from the World Congress and have therefore taped this address,” Mr. Smedlyaev concluded.

The World Congress of Crimean Tatars was originally formed to enhance cooperation among existing Crimean Tatar non-governmental organizations (NGOs) scattered across Europe and Russia, Central Asia and North America as a direct result of Joseph Stalin’s mass deportation of Crimean Tatars on May 18, 1944 – an event now referred to as the Sürgün.

Given the current military occupation of Crimea, this second world congress proclaimed as its goal the development of a strategy of resistance for the worldwide Crimean Tatar diaspora. As the newly re-elected president of the World Congress of Crimean Tatars, Mr. Chubarov remarked, “Tsarist Russia and the USSR are guilty of the fact that at present a large number of Crimean Tatars are living not in the Motherland” but are instead dispersed throughout the world.

“Despite repressions by Russia, the Crimean Tatars will never accept its policy and are struggling against it,” Mr. Chubarov underscored. The indigenous Crimean Tatar people will never want to be part of the Russian Federation. Russia today is the Russia of the USSR and the Russian Empire, and both have no place in a free and independent Ukraine. 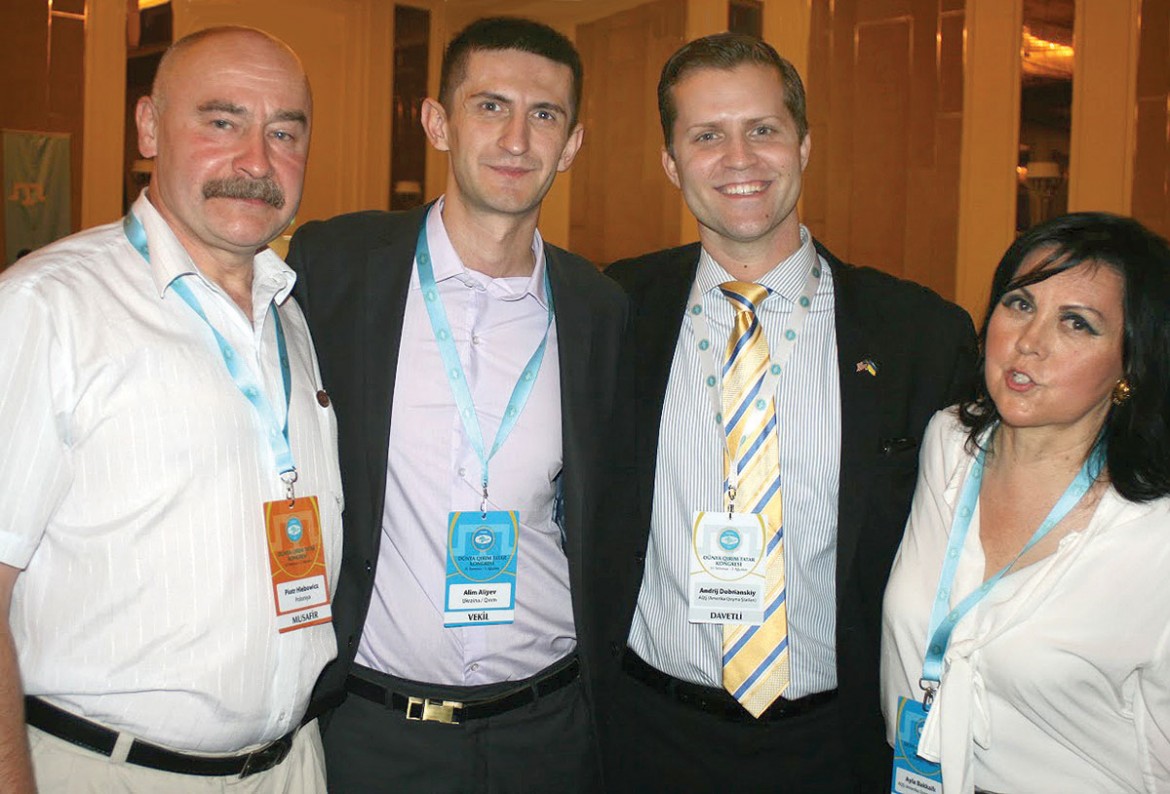 Meeting during the congress (from left) are: Piotr Hlebowicz, Alim Aliyev, Andrij Dobriansky and Ayla Bakkalli, U.S. representative of the Crimean Tatar Mejlis.