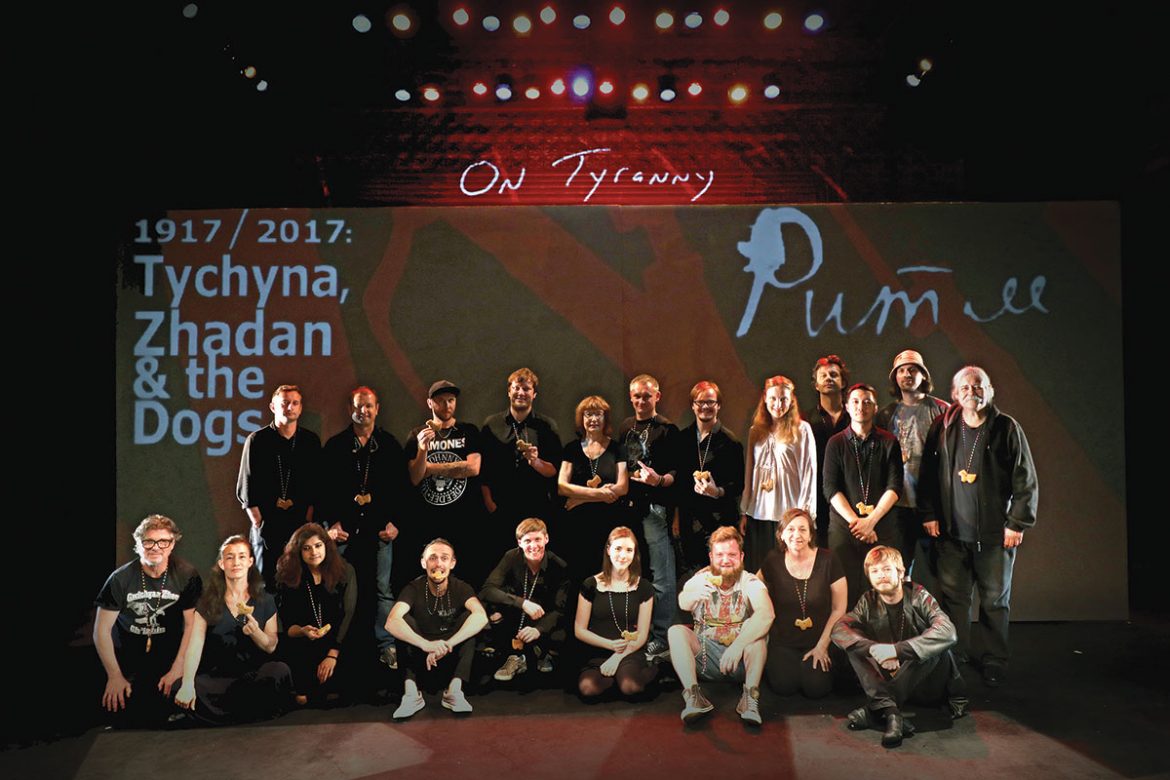 “1917-2017: Tychyna, Zhadan & the Dogs” was an original theater piece with poetry that examined what individuals do when a society crumbles. It was conceived and directed by Ms. Tkacz, using the poetry of Pavlo Tychyna, Ukraine’s great 20th century poet, and the poems and songs of Serhiy Zhadan, Ukraine’s great 21st century poet. The core text of the show was the Tychyna collection “Instead of Sonnets and Octaves,” which, as Kateryna Kindras noted, was Tychyna’s “real but disturbing testimony about ‘his time’ – the bloody events in Ukraine 1918-1920 during the Red Terror.”

In the show, the performances of Tychyna’s poetry were punctuated with songs by Zhadan & the Dogs, a Ukrainian rock group led by Serhiy Zhadan. Mr. Zhadan is famous for his poetry and songs about everyday people caught in today’s conflict in the war zones of eastern Ukraine. 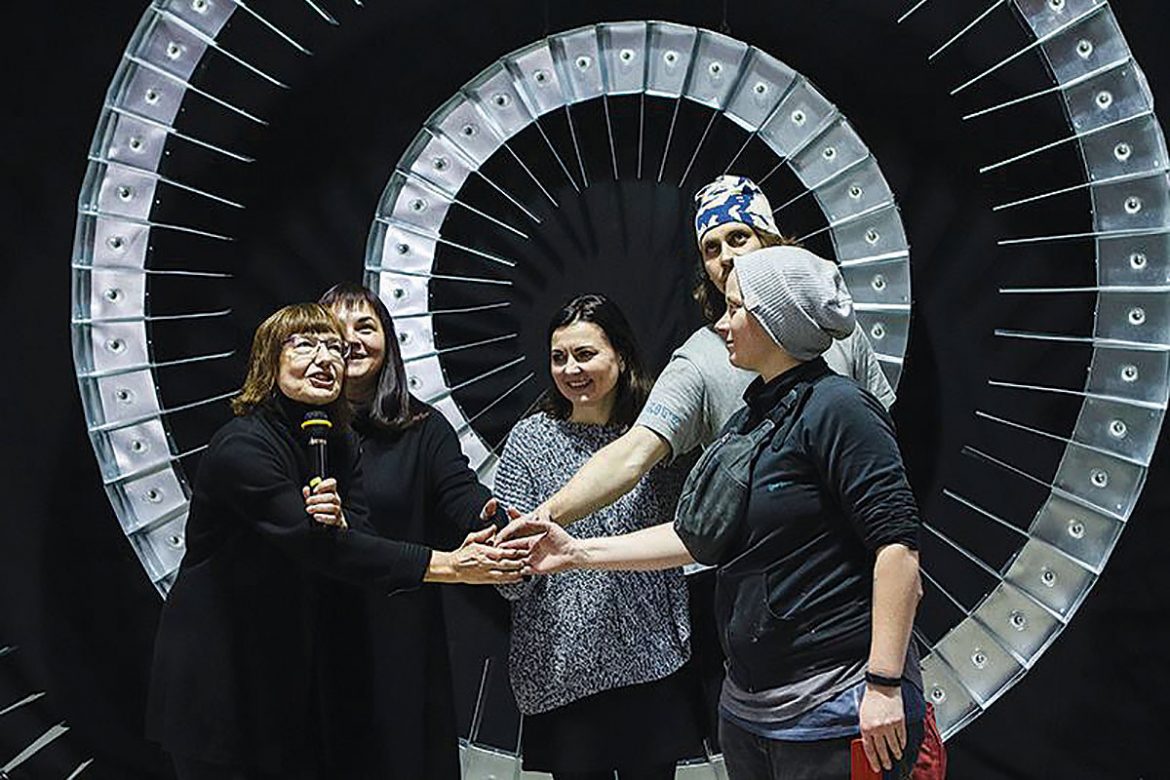 The opening of the exhibition at the Yermilov Center in Kharkiv with (from left) Virlana Tkacz, Natalia Ivanova, Tetiana Rudenko Waldemart Klyuzko and Nadia Sokolenko, who created the exhibition.

New York critics loved the show. Time Out New York listed “1917-2017: Tychyna, Zhadan & the Dogs” as “a show to watch for this week.” The critic for New York Wire wrote: “This magnificent performance encourages us to confront the ugliness with vigor and celebrate the beauty that human beings are capable of in the midst of tragedy and error. In our present climate such artistic collaborations as Yara Arts Group has undertaken and La MaMa E.T.C. has supported for more than 50 years are to be valued as a boon.”

Ms. Tkacz, who is being nominated for Outstanding Director, is the artistic director of Yara Arts Group and has created over 30 original theater pieces with the company. The New York Theatre Wire noted: Director Tkacz “arranged, choreographed and crafted the poetic texts into astounding scenes of powerful images… The poems become the source of experiences that the actors, two women and three men, bring to life through movement and in dialogue, sometimes questioning, sometimes marveling; there is depiction of love and of violence, of loss and of recovery.”

According to the critics, “projections by Waldemart Klyuzko allowed for atmospheric variety that underscored the human drama of each poetic scene.” The images, from Tychyna’s manuscripts and diaries, were a welcome addition “at La MaMa, where the raw intensity of performance isn’t often this ethereal,” according to Theatre Pizzazz. 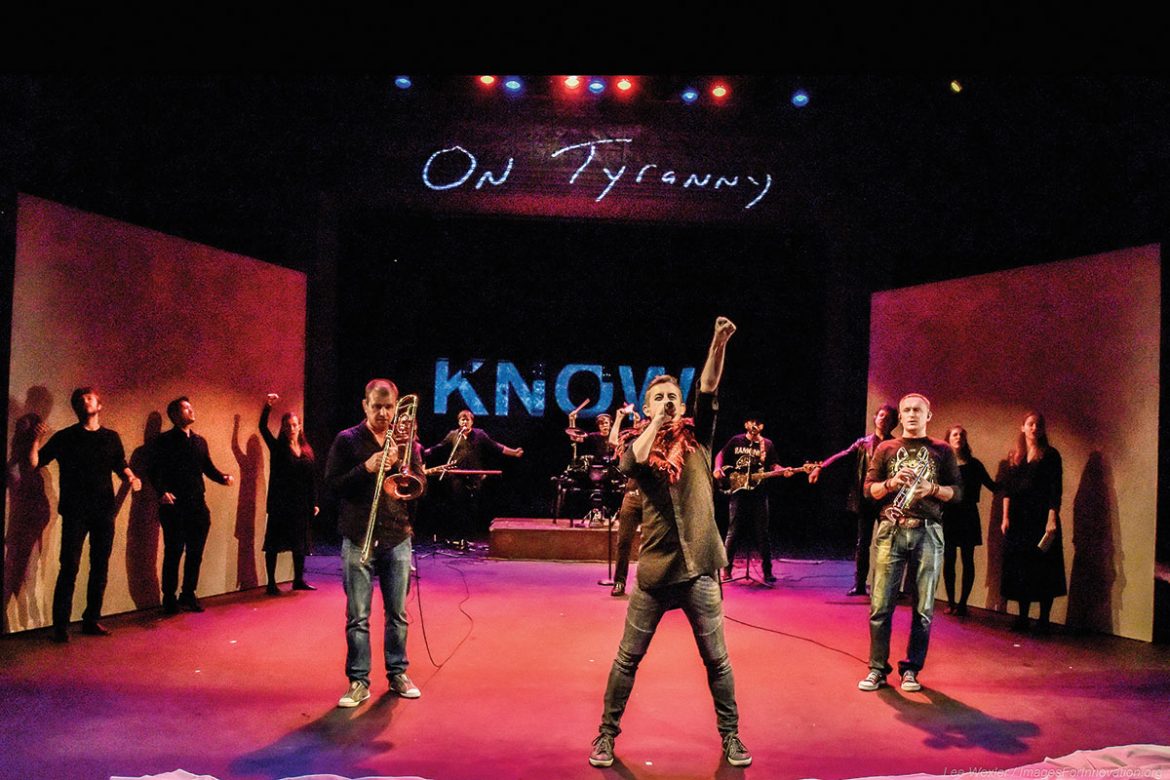 Both Mr. Kytasty and Zhadan & the Dogs were nominated for Outstanding Original Music. Writing for Chas I Prostir, Lydia Korsun noted that, “Julian Kytasty ‘conjured’ on his bandura his best compositions for theater so far.” Mr. Kytasty’s music accompanied the Tychyna poems, which were interspersed with contemporary Zhadan poems performed as songs by Zhadan & the Dogs.

Olena Jennnings felt that “Zhadan’s energy was matched by a colorful background with red and yellow lighting. The dynamic music was a way to bring the poems to heart, to feel them throughout our bodies with the band accentuating the words. The two pieces of the performance converge in a poignant moment when Zhadan picked up a book bound in red cloth, a relic from Tychyna’s time that he brings into the present.”

Responding to the nominations, Ms. Tkacz wrote: “Yara is honored to have been nominated by our colleagues in the independent theater movement of New York. ‘1917-2017: Tychyna, Zhadan & the Dogs’ was Yara’s largest production ever. We brought Serhiy Zhadan and his eight-member rock band from Kharkiv. We had a super Yara cast, plus Bob Holman. The show was powerful and timely, and I am very proud of it.” (See Yara’s website, www.brama.com/yara, for photos and videos from the show.)

Just this week Yara also learned that “Kurbas in Kharkiv,” the museum exhibition that it created in collaboration with the Museum of Theater, Music and Cinema at the Yermilov Center in Kharkiv, was awarded the Vyacheslav Panchenko Award as the best Theatrical Event in Kharkiv last season.

Yara is now working on “Kurbas: New Worlds,” a mega exhibition at the Art Arsenal in Kyiv from October 18 to December 2. The Art Arsenal, or Mystetsky Arsenal, is the premiere art space in Ukraine.