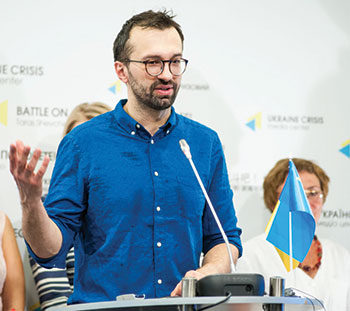 National Deputy Sergii Leshchenko speaks on June 30 about the platform of the new Democratic Alliance party.

“A new platform is launched on the basis of the party Democratic Alliance. It will involve, so to say, new forces: social activists, people who were on the Maidan, who sacrificed their time and energy to participate in the new policy. These people are united around the ideals for which we were standing on the Maidan – a new, honest and non-corrupt government,” said National Deputy Sergii Leshchenko (Petro Poroshenko Bloc faction), at a briefing at Ukraine Crisis Media Center.

According to Vasyl Hatsko, a leader of the Democratic Alliance, the party will be based on three principal pillars: transparent party financing, collective leadership and intra-party competition. “We offer domestic competition and a democratic system of decision-making – a collective leadership. Everyone can find their place and fulfill themselves,” he said.

“We do not have a monopoly on surnames and decision-making. So we have a chance to become a European institution that will develop in the coming decades rather than a pre-election project,” noted National Deputy Svitlana Zalischuk (Poroshenko Bloc faction).

According to Mr. Hatsko, “The party is nationwide. We will fight for voters all over the country – in the east, in the center, in the south, and in the west,” he stressed.

Victoria Ptashnyk, an independent national deputy, said that the future concept will be based on three documents: a manifesto “Reforms must be true”; policy documents prepared by the Nestorivska group; and the vision of the civic platform Nova Krayina. She said that new concept is expected to be approved in autumn. She also explained that the current national deputies are not affiliated with any party faction or are affiliated with factions but not with political parties. That is why their affiliation with the new party will have no consequences.

The activists also noted that if a new party is established by Mikheil Saakashvili and his team, that party and the Democratic Alliance would probably unite to form a coalition in the Verkhovna Rada rather than compete with each other.

According to the party’s Facebook page, the congress declared that the DemAlliance is “an open platform of unity for the new type of politicians, whose purpose is to modernize Ukraine and develop in into a modern European state integrated into the global economic and cultural communities.” The party sees itself as a platform for united democratic forces oriented on reform.