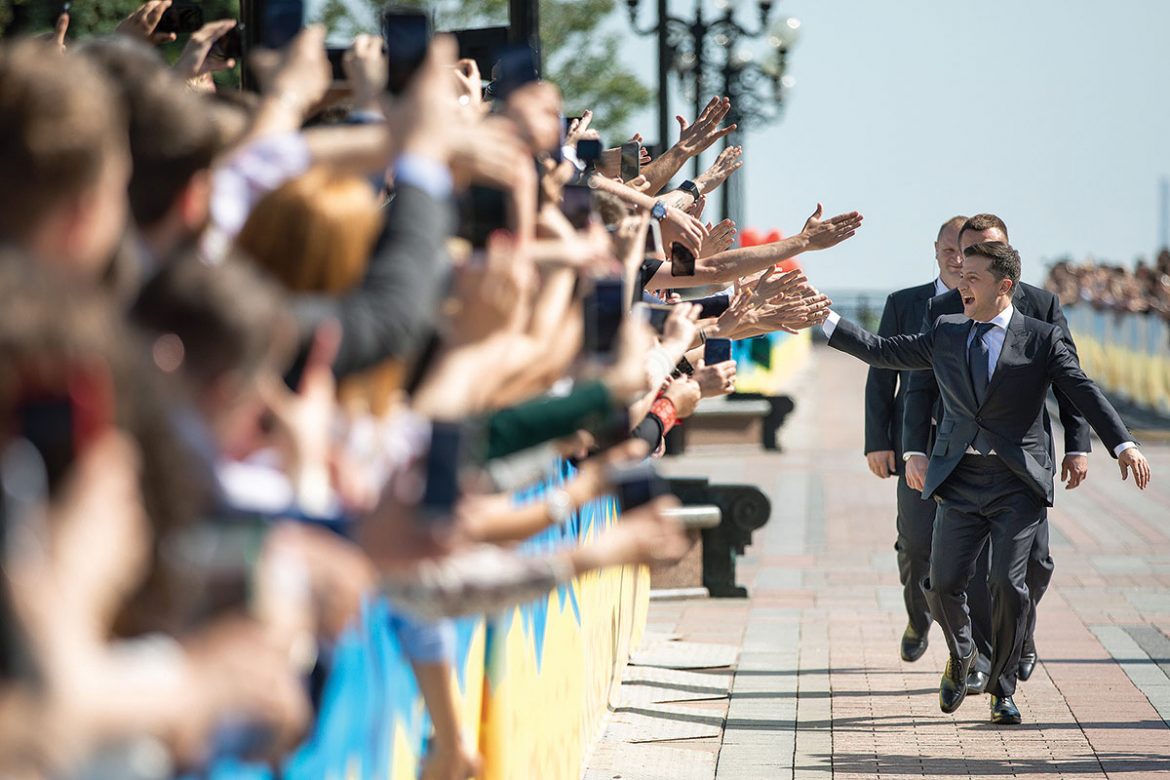 Volodymyr Zelensky walks through Mariyinsky Park after his inauguration at the Verkhovna Rada.

KYIV – President Volodymyr Zelensky has moved swiftly and controversially since being sworn in as the country’s sixth post-Soviet president on May 20 in the Verkhovna Rada.

He subsequently dissolved Parliament on weak legal grounds and reached an agreement with lawmakers to have pre-term Rada elections held in two months, on July 21. In the meantime, Prime Minister Volodymyr Groysman resigned on May 22 in a move that places the sole burden of running the country squarely on the incoming president.

At the same time, the newly inaugurated president, a 41-year-old comedian and political neophyte, appointed Andriy Bohdan to head his presidential staff. He is the longtime lawyer of billionaire Ihor Kolomoisky, whose television channel has broadcast Mr. Zelensky’s comedy shows for the last seven years. The attorney is barred from holding government-appointed positions until 2024 based on a lustration law that was passed in the wake of the Euro-Maidan Revolution.

The law prevents certain former officials of disgraced ex-President Viktor Yanukovych’s administration from civil service – it doesn’t apply to elected officials. Mr. Bohdan twice served as the administration’s representative on anti-corruption policy as deputy minister of the Cabinet of Ministers.

In a May 21 interview on the 112 Ukraina channel, Mr. Bohdan said the law to cleanse government was applied to him for “absolutely unjustified” reasons. He explained that one of the bill’s co-authors was an official in the Justice Ministry, where he had allegedly uncovered a yearly corruption scheme worth 2 billion hrv.

Mr. Bohdan had accompanied Mr. Zelensky on several trips in the past two years to Geneva and Israel, where their mutual associate, Mr. Kolomoisky, had resided during self-imposed exile leading up to the presidential election. That information was reported on May 11 by Skhemy (Schemes), an investigative journalism group.

Constitutionally, concerns remain about whether Mr. Zelensky has the right to call for the dissolution of Parliament given that a ruling coalition doesn’t exist. The Constitution prohibits pre-term parliamentary elections less than six months before a current Rada’s mandate expires. The next elections are scheduled for October 27, thus, Mr. Zelensky was facing a deadline of May 27 to dissolve the legislature. Although he was inaugurated before that date, the governing coalition collapsed on May 17, which means that the Rada has 30 days to form a new coalition, a period during which the president cannot dissolve Parliament.

He added: “Zelensky is leading a Ukraine that is fighting [a war] into a constitutional crisis. The [presidential] decree will be appealed in court. The author of the decree will be held accountable.”

Meanwhile, Mr. Groysman said after the president’s inauguration speech that he will resign and did so at the next weekly meeting of the Cabinet of Ministers on May 22. According to law, the Rada must accept his resignation for it to enter into force.

Mr. Zelensky suggested during his inauguration speech that the prime minister is part of the country’s problem by quoting fellow actor and former U.S. President Ronald Reagan: “Government is not the solution to our problem, government is the problem.”

Mr. Zelensky added, “I do not understand our government that only shrugs and says: ‘There is nothing we can do.’ Not true. You can. You can take a sheet of paper and a pen and free your seats for those who think about the next generations and not about the next election.”

Soon after the inauguration speech, Mr. Groysman said that earlier he had suggested to the president’s staff that the Cabinet and Parliament, working with the new administration, “jointly shape a new agenda and make quick decisions that would make Ukraine strong.”

However, the “newly elected president has chosen a different path… in his statement [inauguration speech], has claimed all the responsibility for future threats, which are on the agenda,” Mr. Groysman said.

Having promised not to engage in nepotism or cronyism during the election campaign, Mr. Zelensky appointed four members of his comedy troupe to his staff. His longtime partner at Kvartal 95 studio, Serhiy Shefir, is now the president’s first aide. The studio’s executive producer, Serhiy Trofimov, became first deputy chief of staff. A former script writer, Yuriy Kostyuk, joined as another deputy head of the Presidential Administration. His childhood friend and studio head, Ivan Bakanov, was appointed as first deputy chief of the Security Service of Ukraine (SBU).

Lt.-Gen. Ruslan Khomchak was named the new chief of the general staff of Ukraine’s Armed Forces, replacing Gen. Viktor Muzhenko, who had served since 2014.

The latter was Mr. Khomchak’s superior during the disastrous Battle of Ilovaisk in August 2014 when thousands of conventional Russian military units joined their proxies to defeat Kyiv’s forces in the Donetsk region town. During the battle, Mr. Khomchak, 51, was in charge of Sector B in Donetsk Oblast and led ground forces in the area.

Former Finance Minister Oleksandr Danyliuk, who accompanied Mr. Zelensky during foreign visits while he was campaigning, most likely will chair the National Security and Defense Council, according to current deputy head of the Presidential Administration Ruslan Ryabopashka.

The president also gave the Verkhovna Rada two months to dismiss the chief of the SBU, the defense minister and the prosecutor general – all posts that he gets to nominate. Defense Minister Stepan Poltorak and SBU chief Vasyl Hrytsak have already resigned.

The overarching theme of the inauguration speech was for Ukrainians of all geographic locations and persuasions to come together and continue building a nation. (The full text of the address appears above.)

“We are all Ukrainians: there are no bigger or lesser, or correct or incorrect Ukrainians,” he said. “From Uzhhorod to Luhansk, from Chernihiv to Symferopol, in Lviv, Kharkiv, Donetsk, Dnipro and Odesa – we are Ukrainians. And we have to be one. After all, only then we are strong.”

He also called on Ukrainians who live abroad to repatriate or return to their homeland.

“There are 65 million of us… – those born on the Ukrainian soil. Ukrainians in Europe and Asia, in North and South America, Australia and Africa,” Mr. Zelensky continued. “We really need you. To all who are ready to build a new, strong and successful Ukraine, I will gladly grant Ukrainian citizenship. You must come to Ukraine not to visit, but to return home. We are waiting for you,” he underscored.

Mr. Zelensky urged Ukrainians to change the way they think: “to unite and make the impossible against all odds.”

However, “our first task is ceasefire in the Donbas,” he said. While not specifically mentioning Russia or Kremlin leader Vladimir Putin, he said: “We are not the ones who have started this war. But we are the ones who have to finish it. And we are ready for dialogue.”

“I can assure you that I’m ready to pay any price to stop the deaths of our heroes. I’m definitely not afraid to make difficult decisions, and I’m ready to lose my fame, my ratings, and if need be – without any hesitation, my position to bring peace, as long as we do not give up our territories,” he explained.

Afterwards, Mr. Zelensky called on the U.S. to strengthen sanctions against Russia for its warmongering and stated that he is ready to conduct an “all for all” prisoner of war exchange with Russia.

While mentioning that everyone should be “equal before the law,” Mr. Zelensky said, “I really do not want my pictures in your offices, for the president is not an icon, an idol or a portrait.” Then he added, “Hang your kids’ photos instead, and look at them each time you are making a decision.”

Representation at the inauguration

Canada’s delegation was led by Minister of Defense Harjit Sajjan, and the delegation from the United States included Secretary of Energy Rick Perry and U.S. Special Representative for Ukraine Negotiations Kurt Volker.

The Ukrainian diaspora was represented by Ukrainian world Congress President Paul Grod and UWC Vice-President Andriy Futey, who also is president of the Ukrainian Congress Committee of America.

Mr. Zelensky and First Lady Olena Zelenska earned nearly $600,000 last year, according to his income and asset declaration. They have four properties in Ukraine worth an estimated $872,000, and an apartment in Great Britain that was purchased for $2.8 million five years ago. An Italian villa purchased for $4 million in 2015 also was listed. He also has more than $200,000 in foreign currency deposited in several banks, including PrivatBank, which was previously co-owned by Mr. Kolomoisky.

The government took the bank under receivership in 2016 after a New York auditor found a $5.5 billion hole on its balance sheet. At that time, the bank was the country’s biggest private lender and held about one-third of deposits in the country’s banking sector.