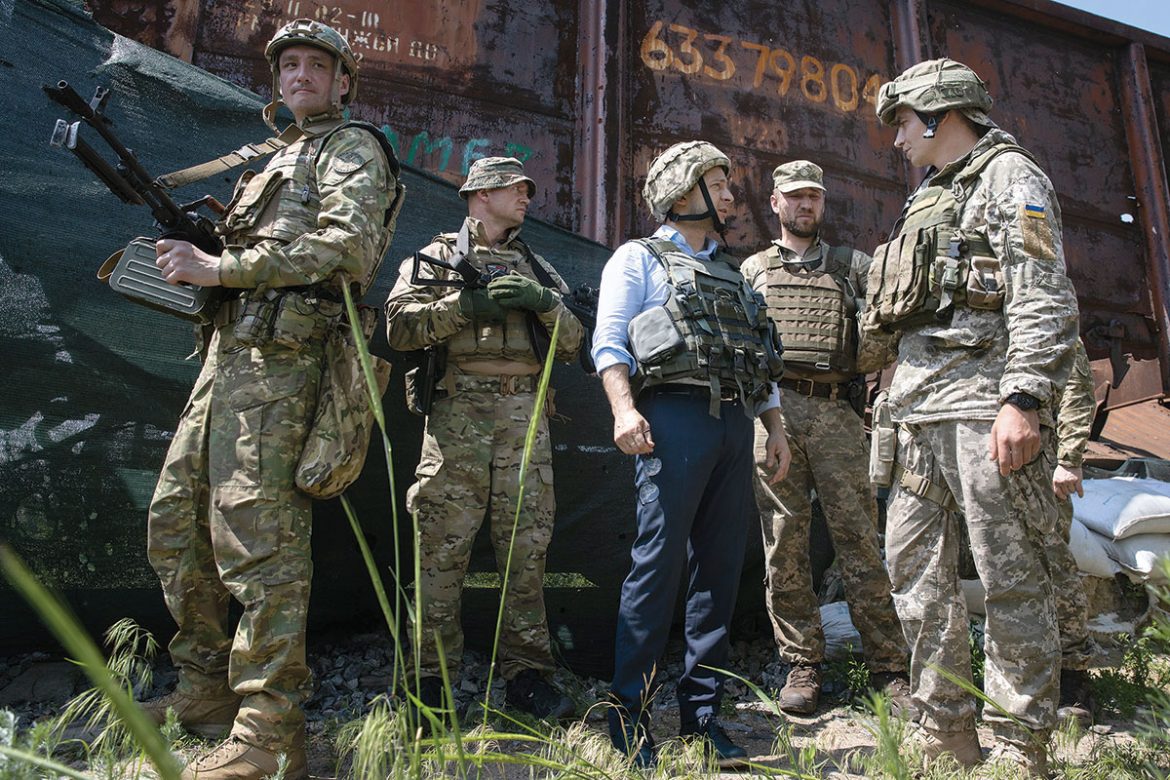 On May 27, Volodymyr Zelensky visited the Donbas war zone in Luhansk Oblast for the first time as president.

Mr. Zelensky will “inform EU and NATO partners about the security situation in eastern Ukraine, discuss ways to activate international efforts to end the war in the Donbas and exchange opinions with institutional leaders of the EU and NATO regarding continuing key reforms in Ukraine,” says a statement on the presidential website.

Separately, the EU announced that the next EU-Ukraine summit will take place in Kyiv in July. The 28-member political and economic bloc is Ukraine’s largest trading partner, with total turnover in goods and services between the two entities amounting to more than $49 billion (U.S.) last year. Ukrainians also enjoy visa-free travel to most EU countries.

This week, Mr. Zelensky visited the war zone in Luhansk for the first time as president. The political newcomer had given numerous entertainment performances for soldiers in the Donbas with his comedy troupe since the Russo-Ukrainian war started February 2014.

His visit took place on May 27 in the frontline towns of Shchastya and Stanytsia Luhanska, the latter of which is the location of one of two civilian cross-points in that easternmost oblast.

The president came as near as 400 meters from the frontline in Stanytsia Luhanska, where Russian-commanded and -controlled forces are positioned, according to a statement on the presidential website.

The commander-in-chief “spoke with the soldiers about living conditions, the quality of food, the provision of equipment, housing and social benefits, as well staffing in subdivisions,” the statement read.

He was also was briefed by Lt.-Gen. Oleksandr Syrskyi, commander of the Joint Forces Operation and Lt.-Gen. Ruslan Khomchak, the newly appointed chief of the General Staff.

During the past week, additional key presidential appointments were made.

Oleksandr Danyliuk, who was the president’s campaign adviser for foreign relations, was appointed secretary of the National Security and Defense Council. He is a former finance minister and a consultant to the McKinsey management and consulting firm.

Oleh Ustenko was named macroeconomic policy adviser to the president. He is the executive director of the Kyiv-based Blezyer Foundation, which is run by the SigmaBleyzer private equity firm.

Mr. Zelensky’s political campaign adviser and spokesperson for his campaign headquarters, Dmytro Razumkov, on May 27 was named the head of the president’s Sluha Narodu (Servant of the People) political party that is running in the July 21 snap parliamentary election.

Mikheil Saakashvili, the former Georgian leader and Odesa Oblast governor, had his Ukrainian citizenship reinstated by the president. He landed on May 29 from Warsaw and said that he will first eat a bowl of borscht and visit a newly built pedestrian bridge that descends down Volodymyr Hill Park in Kyiv.

Cooperation with the IMF

The president also quelled fears that Ukraine won’t continue cooperating with the International Monetary Fund (IMF) on whom it relies on for cheap lending. Mr. Zelensky met with the IMF in Kyiv on May 29, after which he said the “IMF has always been a reliable partner of Ukraine in times when we need support.”

Accompanied by National Bank of Ukraine chairman Yakiv Smoliy and Mr. Danyliuk, the president also promised the international lender that a new bill against illegal enrichment will be submitted to the legislature this week.

However, there was broad investor nervousness on May 26 when the Financial Times published an interview with billionaire oligarch Ihor Kolomoisky during which he urged Kyiv to default on its foreign debt, just as Argentina or Greece have.

Ukraine currently has a $3.9 billion stand-by agreement with the Washington-based lender and must repay more than $5 billion in foreign debt this year. After the IMF meeting, Mr. Danyliuk told journalists that Ukraine will seek a longer-term deal with the IMF.

Citigroup analysts on May 29 said they expect Kyiv to seal a $6 billion loan for three years and that “Ukraine should meet its foreign currency debt repayments even as it may have to draw down its foreign reserves” with “modest” pressure on the national currency, the hryvnia.

However, the IMF has indicated that it will only continue negotiations after this summer’s parliamentary election.

“We don’t see obstacles to cooperation,” IMF team leader Ron von Rooden said in a statement. “After the parliamentary elections, after the [new] government is formed, we are ready to come to Kyiv immediately and continue negotiations on the way to provide our support.”

Mr. Kolomoisky told the Financial Times that there are over 500 lawsuits around the world regarding PrivatBank, once the country’s biggest private lender that he co-owned with longtime business partner Hennadiy Boholyubov.

Ukraine nationalized the bank in 2016 after at least $5.5 billion was found missing on its balance sheets. Mr. Kolomoisky subsequently went into self-imposed exile to Switzerland and Israel, but returned after Mr. Zelensky won the presidency in May.

The 1+1 television network that Mr. Kolomoisky owns has broadcast Mr. Zelensky’s comedy for the past seven years. The two have insisted that they have only “contractual relations.”

“He’s [Mr. Zelensky] not my business partner and he’s not my former employee,” Mr. Kolomoisky told the Financial Times. “He runs and owns shares in a company that has a long-term contract with my company.”

The Federal Bureau of Investigation (FBI) is investigating Mr. Kolomoisky for allegedly committing “financial crimes, including money laundering into the United States,” claims a lawsuit that was filed with the chancery court of Delaware on May 21 by the now state-run PrivatBank.

The Kyiv Post and Daily Beast online news site have previously reported on the FBI investigation.

Both Messrs. Boholyubov and Kolomoisky deny the allegations of fraud.

The Delaware legal complaint alleges that the two former owners used Privatbank as their “personal piggy bank – ultimately stealing billions of dollars” and using “United States entities to launder hundreds of millions of dollars’ worth of PrivatBank’s misappropriated loan proceeds into the United States to enrich themselves and their co-conspirators.”

The lawsuit purports that fake loans were issued to shell companies that funnelled money via sham transactions and which eventually ended up in the U.S. and “used to acquire and support various” businesses and “commercial real estate in Cleveland, Ohio, Dallas, Texas, and elsewhere – all for the benefit and under the control of the UBOs (ultimate-beneficiary owners).”

Yet in Ukraine, Mr. Kolomoisky has already won cases in two lower courts to deem the nationalization of PrivatBank illegal. The National Bank of Ukraine is appealing the case. The oligarch is demanding $2 billion that he said rightfully belongs to him.

An additional $2.5 billion remains frozen worldwide since December 21, 2017, based on a ruling in the High Court of England and Wales. In mid-July, the Court of Appeal in London is expected to rule on a PrivatBank appeal that it had earlier lost in a lower court to the bank’s former owners in November 2018.

The two former bank co-owners are also engaged in arbitration in the Swedish capital of Stockholm.