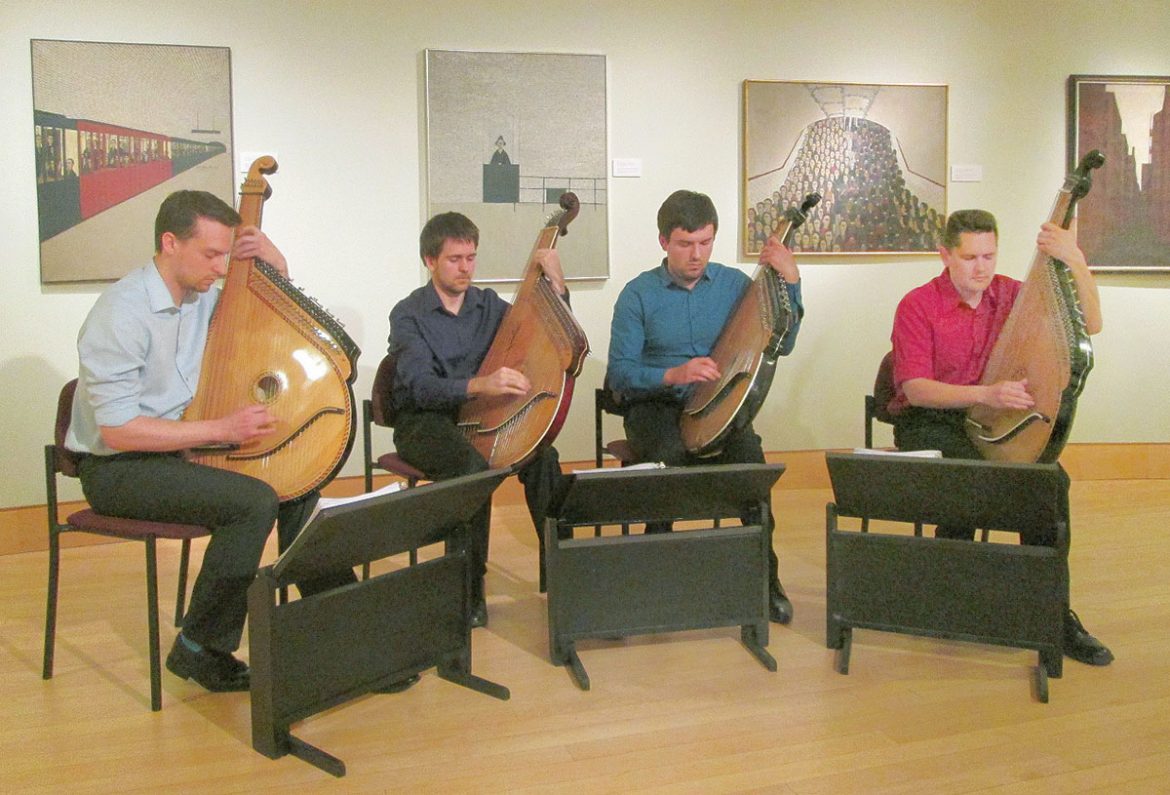 At The Ukrainian Museum in New York City (from left) are: Ivan Dusanowskyj, Borys Ostapienko, Orest Chornomaz and Oleksander Petlura, who performed “Bandura Without Borders.”

NEW YORK – The Bandura Downtown concert series at The Ukrainian Museum in New York City ended it 10th season on Saturday, May 21, with the premier concert of “Bandura Without Borders.” Under the musical directorship of Julian Kytasty, the concert featured four bandurists from Toronto, Ivan Dusanowskyj, Borys Ostapienko, Orest Chornomaz and Oleksander Petlura.

All four are long-time members of the Canadian Bandurist Capella. Mr. Ostapienko is the concertmaster and Mr. Petlura is a founding member of the capella. All four began playing the bandura when they were still in their pre-teens. Through the years, their skill and talent developed and broadened; all are now instructors of the bandura. Each has taught at numerous bandura camps and workshops in Canada and the United States. Together, they founded the Toronto Bandura School (for more information go to banduraschool.ca).

This was their first full program as a quartet. In their concert, performed in two sets, they omitted all vocals, instead using the instrument to showcase the possibilities of the modern bandura.

They opened the first set with a sprightly “Stukalka,” a folk melody arranged by Danylo Pika, capturing everyone’s attention. As a counterpoint, they followed with the contemplative “Larghetto” by Dmytro Bortniansky, in an arrangement for bandura by Olya Herasymenko.

Next, they played a spirited version of “Zaporizhian March” by Yevhen Adamtsevych that brought acclaim from the audience. In “Sorcerer’s Dance,” the foursome highlighted the magical shape shifting of the “kharakternyk” in this piece by Hryhoriy Kytasty. Watching their hands as they played the pieces was mesmerizing. Each played in a different range of the bandura, and together the four “voices” brought forth a graceful intonation.

The first solo of the evening was by Mr. Ostapienko of his “Ukrainian Folk Melodies.” His vivid performance yielded a prolonged round of appreciative applause.

That was followed with the quartet performing “Field, Forest and Sky” by David Minnick. “Rondo Alla Turca” by Wolfgang Amadeus Mozart featured a solo performance by Mr. Dusanowskyj with accompaniment by Mr. Ostapienko. The arrangement wonderfully expressed the liveliness of this Turkish-influenced work. The duo received an energetic round of prolonged applause.

The set closed with “Habanera,” played in a four-bandura form that allowed the quartet to explore the interwoven melody of this piece from “Carmen” by Georges Bizet. Their intricate playing was not lost on the attendees, whose applause expressed their appreciation.

The brief intermission allowed the audience to reflect on what they had heard and to view the ongoing “Jacques Hnizdovsky: Content and Style, Evolving Perspectives” exhibit at the museum.

Mr. Chornomaz followed with his performance of “Variations on Two Ukrainian Folk Themes” by Kostyantyn Novytskyi. His solos produced a reverie that almost seemed rudely interrupted by the applause, for it was difficult to return to reality.

The seemingly simple “Vesnyani Dzvinochky” by Ms. Herasymenko proved to be a wonderful opportunity for the four sets of flying fingers to exchange phrases and solos.

“Angels” by Ray Heffernan, Robbie Williams and Guy Chambers, was an ideal vehicle for Mr. Petlura to explore dynamic and rhythmic changes, his playing taking the listeners on a celestial journey.

The duo of Messrs. Petlura and Ostapienko performed the variations on “He’s A Pirate, written by Klaus Badelt for “Pirates of the Caribbean: The Curse of the Black Pearl,” with lightning-fast string work and dynamic flourishes.

The quartet returned with the popular Steven Tyler song “Dream On” in an arrangement by Mr. Dusanowskyj that had the bandurists play this pop song with a vigor that seemingly surpassed that of Aerosmith.

The ensemble tried to end its long second set with the arrangement by Yuriy Petlura of the “Chaika” medley composed by Semen Hulak-Artemovsky and Ron Cahute. One says “tried” because the cheers and the prolonged standing ovation that the foursome received at the end of the set saw them yielding to the audience’s demand for an encore. They returned to their seats and played “Chaika – A Reprise,” which resulted in a second well-deserved standing ovation from the audience.

These four exceptionally talented musicians, brilliant composers and arrangers envision the bandura as a versatile instrument. In Ukrainian, the concert was titled “Bandura Poza Mezhamy.” Listening to the imaginative playing and powerful performances, one could readily translate that as “Bandura Without Limits.” Their performance that evening demonstrated that the bandura has a voice of its own, varying timbre, a wide and beautiful dynamic range, and that it is an instrument that can communicate emotion, sentiment and imagery.