The stars of the 2014 Ukrainian Cultural Festival, held July 11-13 at the Soyuzivka Heritage Center: (from left) Vasyl Popadiuk, Ruslana and Oleh Skrypka. 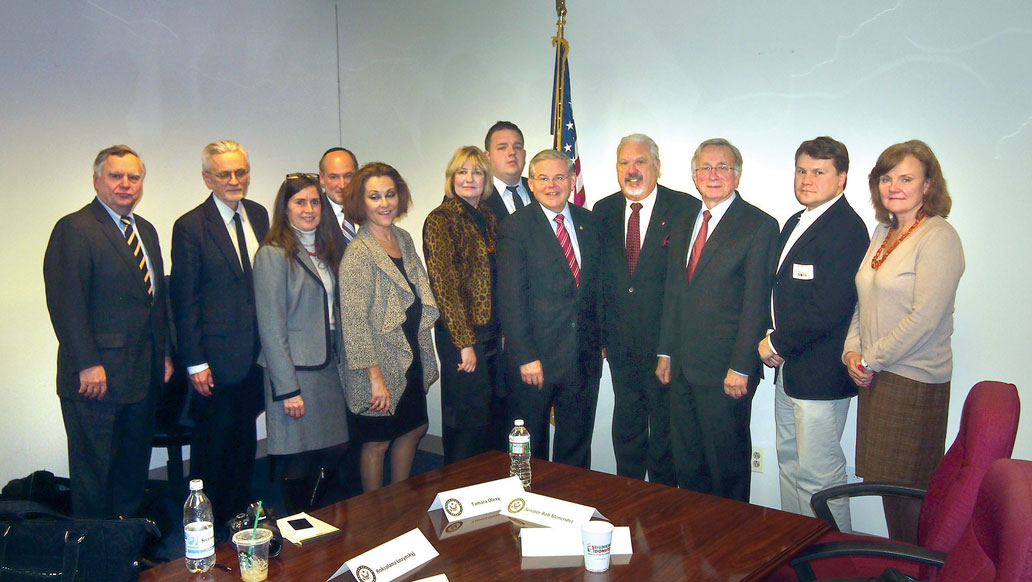 Ukrainian American community representatives with Sen. Robert Menendez (fifth from right) after a roundtable discussion on current developments in Ukraine at his office in Newark, N.J. The January 2 meeting was organized by the Ukrainian National Association.

For the Ukrainian National Association, 2014 began with the announcement in January of the UNA’s 38th Regular Convention to be held May 15-18 at the Soyuzivka Heritage Center. It was also the year the UNA, the world’s oldest and largest Ukrainian fraternal organization, marked the 120th anniversary of its founding.

Our readers know this organization as the publisher of this newspaper (founded 1933) and our sister publication, Svoboda (founded 1893). Others know the UNA as the owner of the Soyuzivka Heritage Center. Many others know the UNA as the provider of solid life insurance, endowment and annuity products. Through its charitable arm, the Ukrainian National Foundation, the UNA continues to support the work of the National University of Ostroh Academy, student scholarships in North America and Ukraine, the press funds of the UNA’s two weekly newspapers, as well as many more projects.

The Almanac of the Ukrainian National Association for 2014 commemorated the 120th anniversary of the UNA’s founding on February 22, 1894, as well as the 200th anniversary of the birth of Ukraine’s greatest poet and national bard, Taras Shevchenko. Worth noting is the fact that the UNA since its founding has considered Shevchenko its spiritual patron. Thus, the anniversaries marked in the 2014 almanac were fittingly intertwined.

Also to mark the UNA’s major anniversary, The Ukrainian Weekly published a list of all UNA executive officers since the organization’s founding in 1894 through the present day. The list appeared in our May 18 issue, just in time for the UNA Convention.

Another historical note was our May 18 editorial, which informed readers (and reminded those who knew) that 2014 also marked the 120th anniversary of a singular event: the first time that the anthem “Shche Ne Vmerla Ukraina” was sung in America. And it happened at the first Regular Convention of the UNA in Shamokin, Pa., which was held on May 30, 1894, just over three months after the founding meeting of the UNA. Svoboda described the scene: “Since morning, a light and benevolent May rain had been falling, as if Mother Rus’ was crying tears of happiness upon seeing that her children had not been lost, that they were hurrying from all directions, with blue-and-yellow badges on their chests, to a community assembly.” The convention was preceded by liturgy at the local church that was overflowing with people; hundreds stood outside. Afterwards, during the convention luncheon, the Rev. Hryhory Hrushka, founder and editor-in-chief of Svoboda, spoke of the significance of Soyuz. He was followed by a 50-voice choir that sang “Shche Ne Vmerla Ukraina.”