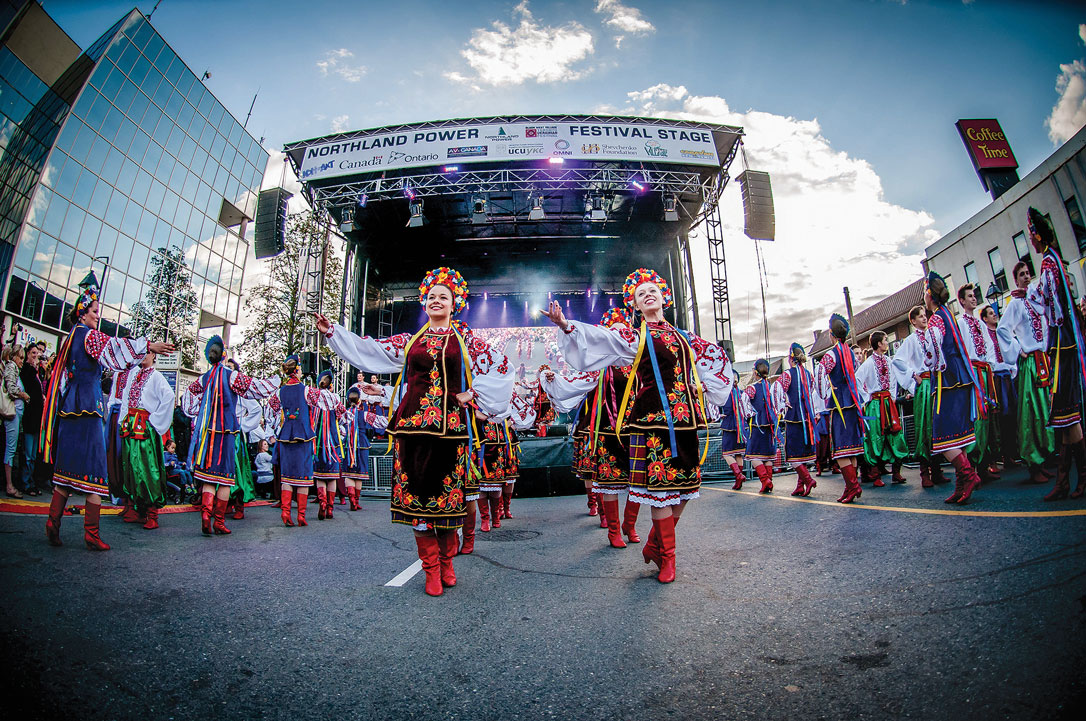 The Barvinok Ukrainian Dance School of Mississauga, under the artistic direction of Fedir Danylak, performs its crowd-pleasing two-tier Hopak at the closing ceremonies of the 18th annual Bloor West Village Toronto Ukrainian Festival, which was held on September 12-14.

Besides manifesting deep concern with developments in Ukraine, Ukrainian Canadians were active during 2014 in myriad ways – from book publishing and education to museums, and from solemn anniversaries to celebratory festivals. Some of the most noteworthy events and developments are given below in chronological order.

The play “Luba, Simply Luba” was presented with the fifth Kobzar Literary Award, during a ceremony at the Palais Royale in Toronto on March 5. “Luba, Simply Luba” was written by playwright Diane Flacks as a stage presentation for the Ukrainian comedienne Luba Goy. The book chronicles the life of one of the best known and successful Ukrainian Canadian actors, a 35-year veteran of the CBC’s political and cultural satire “Royal Canadian Air Farce,” while weaving through it a poignant immigrant story. The work was a collaborative effort, written by Ms. Flacks with assistance from Ms. Goy and director Andrey Tarasiuk. 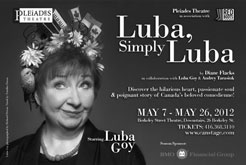 The Ukrainian Canadian Civil Liberties Association (UCCLA) on March 21 called upon the government of Ontario to suspend the sale of alcoholic beverages produced or exported by the Russian Federation. UCCLA Chairman Roman W. Zakaluzny said: “There has been worldwide condemnation of the illegal seizure of Ukrainian territory by the Russian military and the subsequent occupation and annexation of Crimea by the Russian Federation. Until such a time as Russian forces withdraw from Ukraine and stop threatening Ukraine’s political independence and territorial integrity, we want the LCBO to ban all Russian Federation products… we can all do our small part to signal a protest against Russian imperialism.”

The second national Ukrainian Teachers of Canada conference was held in Edmonton on May 2-4, in conjunction with the 40th anniversary of Ukrainian bilingual education in Alberta. The conference was organized by the National School Council of the UCC with support from Ukrainian Language Education Center (ULEC) and several Alberta educational institutions. It brought together 81 participants from across Canada to address vital issues of Ukrainian language and culture education in the 21st century.

In her presentation, ULEC’s acting director and an associate at the University of Alberta, Dr. Alla Nedashkivska, addressed the question of the future of Ukrainian at the post-secondary level. Dr. Nedashkivska also organized, with graduate students Olena Sivachenko and Oksana Perets, a panel discussion on “Digital Technologies, Blended-Learning and Students’ Motivation: Ukrainian at the Post-Secondary Level.” Keynote speaker Dr. Olenka Bilash spoke on global best practices: “Effective 21st Century Language and Culture Learning Strategies.” ULEC participation was accompanied by a display of its resource materials including the “Nova,” “Tut i Tam” and “Budmo” series.

Josef Zissels is the vice-president of the World Jewish Congress and chairman of the Association of Jewish Organizations and Communities in Ukraine. He was in Toronto in May and was interviewed at the Ukrainian Canadian Research and Documentation Center (UCRDC). The main theme of his remarks was the change in self identity of Jews in independent Ukraine.

Born in Tashkent, Mr. Zissels lived in Ukraine and in 1973 made contact with dissident groups in Kyiv and Moscow, joining the Ukrainian Helsinki Group in 1978. He was arrested and imprisoned twice and was incarcerated for a total of six years. In October 1987, Mr. Zissels became active with the renewal of Jewish life in Ukraine and formed the first Jewish organization there. He told the UCRDC that, until 1991, Jews in the USSR were very assimilated and considered themselves to be Soviet Jews. It was only after 1991 that they started to freely learn about traditions and cultural aspects of their lives, and began to follow different trajectories of development as their countries had received different models to follow. Ukraine had received the model of a democratic state.

Mr. Zissels considered it very important that Jews took part in the Maidan. Three perished on the barricades. Although there were three or four Jewish leaders who supported Viktor Yanukovych and who claimed that anti-Semitism was growing, Mr. Zissels maintained this was not true. He said that there were a lot of stereotypes of the past, and a lot of provocations and propaganda from Russia.

Jews were on the Maidan and they appeared on its stage. A rabbi said a prayer for peace. Jewish ensembles, artists and writers took part. The open university on the Maidan presented lessons on Jewish history and all this was very positively received, Mr. Zissels said. Now in Ukraine Jews are seen as allies because they took up the protests. They now believe that it will be comfortable for Jews to live in Ukraine because they do not merely have rights since Ukraine is a democratic country, but they fought together with fellow citizens to win these rights.

The Ukrainian Canadian Art Foundation (known by its Ukrainian acronym KUMF) in Toronto was established by Mykhailo and Yaroslava Szafraniuk, who owned a furniture business and collected art. When they liquidated their business, their art collection numbered about 200 works. In 1975 they established KUMF for which, in 1979, they bought a building and donated 120 works of art which formed the basis of the KUMF Collection. 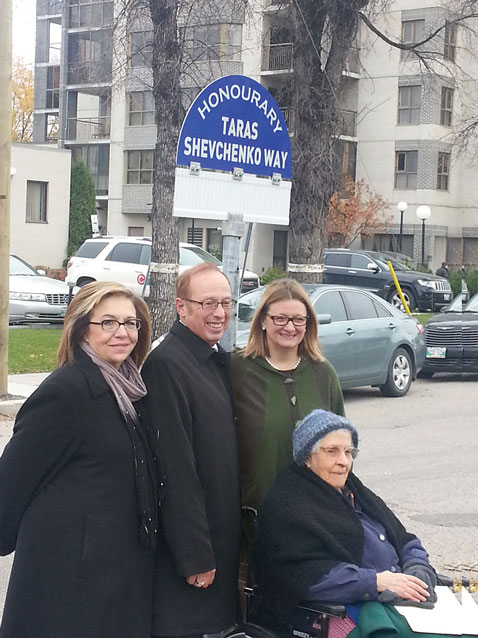 Winnipeg designated a one-block stretch of Aberdeen Avenue, between Main Street and the Red River, to be named in honor of Taras Shevchenko; the designation will be in effect for 200 years. Above, Mayor Sam Katz is seen with Ukrainian Canadian activists at the October 17 naming ceremony.

Until 2003, the KUMF gallery received a financial contribution from the Pomich Ukrainy Fund but then financing of KUMF gallery came to depend on the community. When the family sold the building where the gallery was located, KUMF had to vacate its premises. KUMF owns a permanent collection of over 500 works of art, the majority of which are works by well-known Ukrainian Canadian and Ukrainian American artists. The goal of KUMF has always been to foster the development of Ukrainian art. KUMF became the best known Ukrainian cultural center of arts in Toronto. The KUMF gallery was the only Ukrainian gallery in Canada that is committed exclusively to visual arts. KUMF relocated in September to a new home at the Ukrainian National Federation building, 145 Evans Ave., Toronto.

August 22 marked the 100th anniversary of Canada’s first national internment operations and the 100th anniversary of the War Measures Act. The War Measures Act provided for the registration or internment of “enemy aliens” – persons who had immigrated from countries then at war with the British Empire. As most of the 170,000 Ukrainians who had arrived in Canada prior to 1914 had held Austro-Hungarian passports, they became enemy aliens. 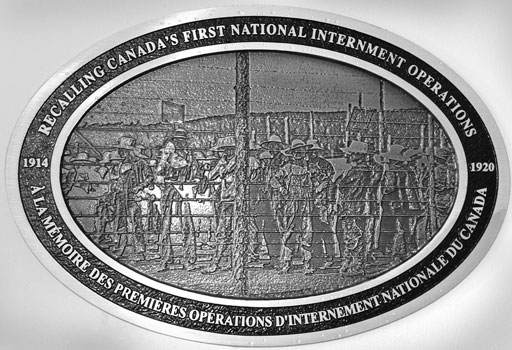 The plaque marking the centennial of the First National Internment Operations of 1914 features a scene in bas-relief from an internment camp. To mark the anniversary, 100 such plaques were unveiled nationwide on August 22.

Prof. Lubomyr Luciuk, who learned about the internment operations in 1978, conceived Project CTO (“сто” is the Ukrainian word for 100). The Ukrainian Canadian Civil Liberties Association (UCCLA) received a grant from the Endowment Council of the Canadian First World War Internment Recognition Fund for Project CTO – 100 bilingual (English and French) plaques were unveiled across the country on August 22 at 11 a.m. local time, creating a “wave” of plaque unveilings. It was an entirely volunteer effort, with each recipient group largely responsible for its own local event. Project CTO plaques were unveiled in locations where they will remind all Canadians about Canada’s first national internment operations. In Toronto alone, home to a huge Ukrainian community, there were 10 venues where the plaques were unveiled.

The week of the CTO project, The Ukrainian Weekly published an editorial (August 17) bringing attention to the project and noting the following salient points: The CTO project aimed to educate the people of Canada about a little known episode of their history. Many of the internees’ family members were not aware of the grave injustice done to their kin. Thanks to the CTO project, new generations of Canadians will be informed and will perpetuate the memory of those who came before them.

Also, on August 22, Prime Minister Harper issued a statement on the internment: “in remembrance of those interned in Canada during the first world war… we look back with deep regret on an unjust policy that was implemented indiscriminately as a form of collective punishment and in violation of fundamental principles of natural justice, including the presumption of innocence. In Canada we acknowledge the mistakes of the past, and we learn from them.”

On September 12-14, the 18th annual Bloor West Village Toronto Ukrainian Festival served up a long weekend of non-stop entertainment, food, cultural displays and activities for all ages. The festival public was welcomed by founder and chair, Jurij Klufas. Visitors enjoyed a lively program of song and dance on two stages: the grand “Northland Power Festival Stage” and the smaller “Teach Me to Dance” stage.

As usual, there were pavilions throughout the festival grounds devoted to various community concerns and staffed by their members and supporters. There was also a pavilion highlighting tourism and various areas of Ukraine. Victor Malarek launched his latest book, a work of fiction titled “Orphanage 41.” The Ukrainian Museum of Canada hosted the Ukrainian Pavilion, exhibiting artifacts from the central Dnipro region in Ukraine. For art lovers, there were two exhibitions: “From Ukraine with Music” by photographer Orest Dorosh, and a mixed media collection by the Ukrainian Association of Visual Artists of Canada.

Festival MC Borys Sirsky introduced singing and dancing solos and groups from all over Ontario, as well as from Washington, Montreal, Calgary and Philadelphia, topped off by Edmonton’s powerhouses: the Ukrainian Shumka Dancers and the Viter Choir. The evening’s show was headlined by the group from Vinnytsia – TIK, a folk-rock band with influences of ska and shanson. Jason Kenney, Canada’s minister of employment and social development and minister for multiculturalism, joined Messrs Klufas and Grod on stage for the closing ceremonies.

In Winnipeg on October 17, a one-block stretch of Aberdeen Avenue, between Main Street and the Red River, was named in honor of Taras Shevchenko. The designation will be in effect for 200 years. This initiative was supported by a special Shevchenko bicentennial committee of the Ukrainian Canadian Congress Manitoba Provincial Council (UCC-MPC). The chair of the committee was Myroslava Pidhirnyj, and Oksana Halkevych Shulakewych was the coordinator of the street-naming project.

On November 19, to mark Holodomor Awareness Week, the UCC, the Canada-Ukraine Parliamentary Friendship Group and the Embassy of Ukraine in Canada held a commemoration of the 81st anniversary of the Holodomor. The speakers at the service included Speaker of the House of Commons Andrew Scheer, Minister Jason Kenney, and MPs James Bezan, Linda Duncan and Chrystia Freeland. Ukraine’s Ambassador Vadym Prystaiko also addressed the gathering. UCC President Paul Grod spoke on behalf of the Ukrainian Canadian community, Holodomor survivor Dr. Julia Woychyshyn lit the ceremonial candle, and Michael Hrycak read the names of the victims from the “Book of Memory.”

On the same day, the League of Ukrainian Canadians awarded Sen. Andreychuk with the Mikhnovsky Medal of Merit for her contribution towards a universal recognition of the Ukrainian Holodomor of 1932-1933 as an act of genocide by famine. The Mikhnovsky Medal of Merit is awarded to individuals for their service to community and humanitarian causes. The award was presented by Orest Steciw, president, who said that Sen. Andreychuk had been instrumental in initiating the process of Holodomor recognition on Parliament Hill.