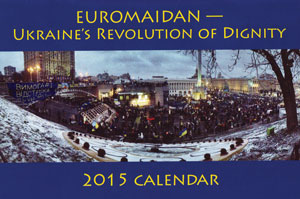 ANN ARBOR, Mich. – Branch 50 of the Ukrainian National Women’s League of America (UNWLA) has released a 2015 calendar titled “Euromaidan – Ukraine’s Revolution of Dignity” that features colorful photography by bloggers, journalists and freelance photographers from around the world who chronicled the events.

Jessica Zychowicz, Ph.D. candidate in the University of Michigan Department of Slavic Languages and Literatures, writes in the preface: “The revolution will be remembered for how it began, with hope. The people of Ukraine are known for resilience. Observers around the globe have expressed admiration for their tireless striving for better life opportunities and social change. The thousands and thousands of seemingly insignificant acts of selfless courage on the part of the taxi drivers, volunteer medics, independent media journalists, self-defense units, and others who fought for their rights have resulted in a more a collaborative, open society.”

“Because of the dignified motivation and optimism of those who first gathered on the Maidan, the world will know the difference between revolution and war. More importantly, generations to come will know that the most lasting revolution is the one that stands for a return to peace,” writes Ms. Zychowicz.

The calendar includes major holidays from the Julian and contemporary calendars, as well as lunar cycles. The Ukrainian National Women’s League of America is a non-profit organization. All proceeds will be used to advance Ukrainian studies at the University of Michigan. To purchase the calendar, contact Ruth Shamraj, rshamraj@comcast.net. The price is $10 plus $2 shipping (for orders of multiple copies, shipping is $2 for the first copy and $1 each for additional copies).