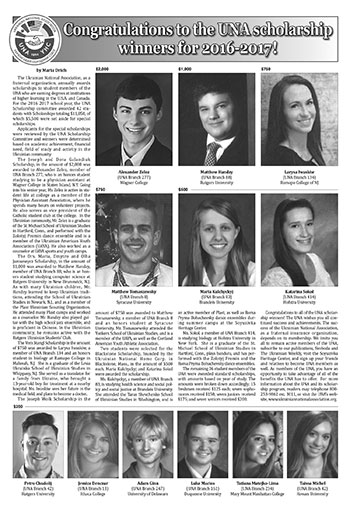 The first page of the UNA scholarship awards supplement that appeared in the September 4 issue of The Ukrainian Weekly.

Traditionally, the UNA marks the beginning of a new year with the release of its new Almanac. The Almanac of the Ukrainian National Association for 2016 (Petro Chasto, editor) marked several notable anniversaries, including the 70th anniversaries of both the so-called Lviv Sobor of 1946 that liquidated the Ukrainian Greek-Catholic Church by proclaiming a “reunion” with the Russian Orthodox Church and of the famine of 1946 in Ukraine.

Also at the beginning of the year, on January 19, the UNA coordinated a meeting between U.S. Rep. Frank Pallone (D-N.J.) and several leaders from the Ukrainian American community at the congressman’s New Brunswick office. Included in the group were: Andrij Dobriansky from the Ukrainian Congress Committee of America, Walter Zaryckyj of the Center for U.S.-Ukrainian Relations, as well as Roma Lisovich, UNA treasurer, and Yuriy Symczyk, UNA fraternal coordinator. The congressman had reached out to Mr. Symczyk, expressing his desire to meet with leaders of the Ukrainian American community to share details from his trip to Ukraine and reaffirm his efforts in continuing to help Ukraine, including providing military and humanitarian assistance, and supporting a Crimean annexation non-recognition bill.

As always, the UNA continued to care for its members of all ages. The organization’s scholarship program continued in 2016 and an editorial in the April 17 issue of The Ukrainian Weekly highlighted that popular fraternal benefit. “It’s that time of year when our high school seniors are making decisions about where to attend college – decisions that will have a far-reaching effect on their future. …Thus, it’s a good time to remind readers that our publisher, the Ukrainian National Association, offers scholarships and monetary awards to college students who are its members. In fact, you may have noticed that this newspaper and our sister publication, Svoboda, have been running advertisements announcing that applications for the 2016-1017 academic year are now being accepted…” 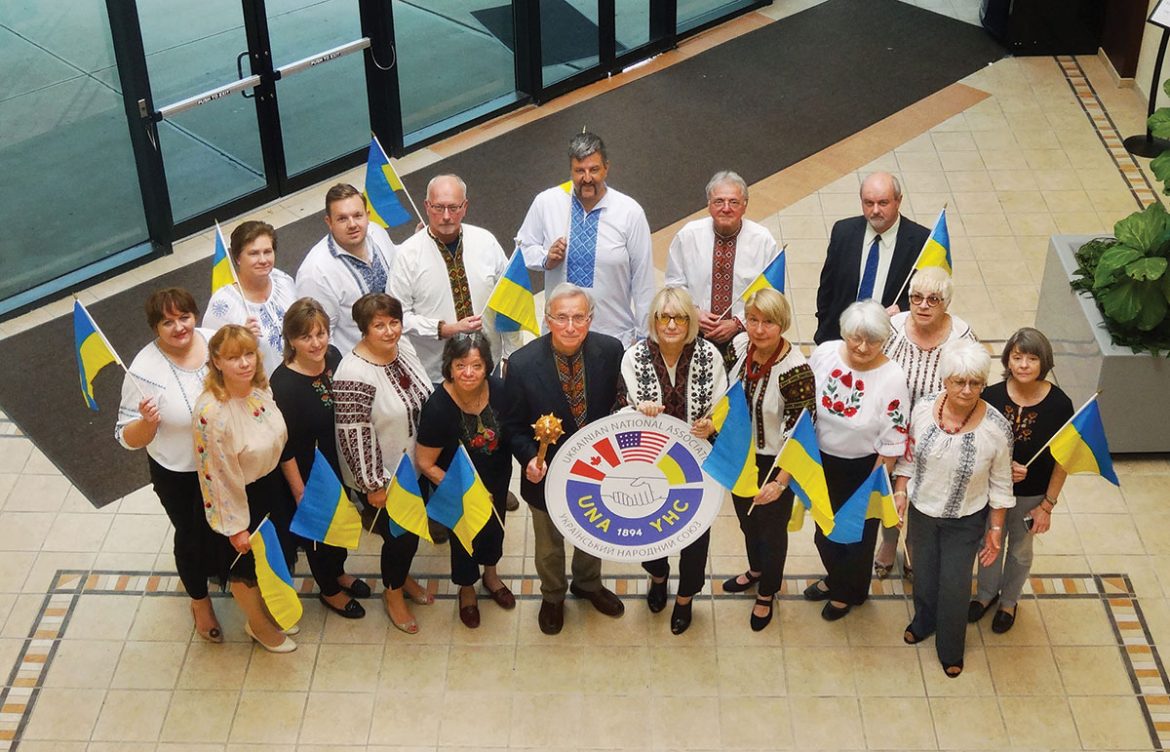 Employees of the Ukrainian National Association, Svoboda and The Ukrainian Weekly in their Ukrainian embroidered finery on Vyshyvanka Day, May 19.

The editorial also noted that the program traces its beginnings to the informal granting of scholarship assistance almost since the organization’s founding in 1894 and that since its formal establishment in 1964, the UNA has disbursed over $2 million to students. The UNA’s 2016-2017 scholarship recipients were featured in the September 4 issue of The Ukrainian Weekly (and in Svoboda as well) – just as the new academic year got under way. Notably, that issues was distributed during the hugely popular Labor Day weekend festivities at the Soyuzivka Heritage Center, which are attended by hundreds of our community’s young people. For the 2016-2017 school year, the UNA assisted 42 of its student members with scholarships totaling $11,050.

The UNA Seniors – rebranded as “Savvy Seniors” – held their annual conference and getaway at Soyuzivka on June 12-17. On the agenda were informative presentations, workshops, delicious meals and various fun activities.

Also in June, a front-page story in The Weekly cited the work of the Ukrainian National Foundation (an affiliated company that performs charitable activities on behalf of the UNA), the Markian Paslawsky Fund and the Kyiv-based International Alliance for Fraternal Assistance, who are working together to develop a modern rehabilitation space at the Lviv State Enterprise for Prosthetics and Mobility. The Markian Paslawsky Fund was organized by the family and friends of the Ukrainian American who died while fighting with a volunteer battalion in the battle of Illovaisk. Representatives of the Paslawsky family and the IAFA agreed that developing a modern rehabilitation facility in Ukraine was a worthwhile endeavor. The UNF played a key role in generating much-needed funding that allowed the project to progress. At the same time it was reported that the UNF and the Paslawsky Fund were in talks with the Ukrainian Catholic University to work together for the rehabilitation of war victims. 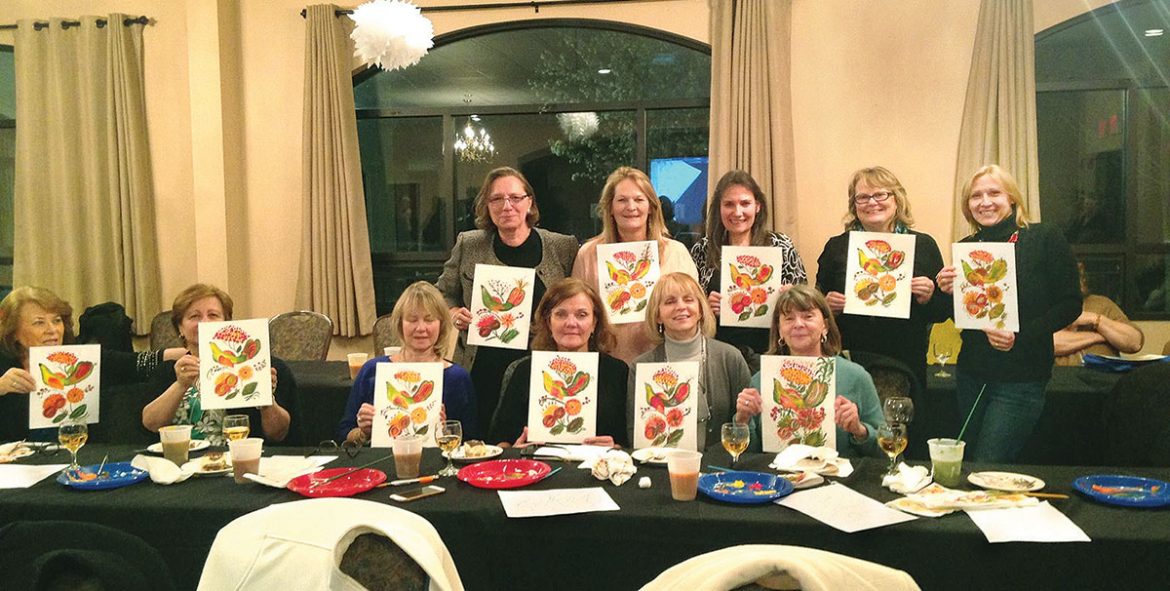 Participants of the Petrykivka Workshop sponsored by the UNA on April 8 at the Ukrainian American Cultural Center of New Jersey in Whippany show off their artwork.

Part of the UNA’s community outreach program during 2016 was a Petrykivka Workshop held on April 8 at the Ukrainian American Cultural Center of New Jersey in Whippany. About 50 participants – a full house – were instructed in this Ukrainian art form by Natalia Lyubytska an artist who hails from Lviv. The evening’s five-course dinner of small plates paired with various wine selections was arranged by Soyuzivka Manager Nestor Paslawsky and prepared by Soyuzivka’s head chef, Andrey Sonevytsky. The event was organized by the UNA in support of the UACCNJ’s Arts, Education and Culture Committee.

To mark Life Insurance Awareness Month, The Ukrainian National Association Forum pages in The Weekly in September featured a series of four articles penned by Irene Jarosewich under the column heading “Insurance Matters.”

Speaking of insurance, the UNA published a new version of its full-color magazine. This year, it was called “Guide to Life.” Inside, readers could find not only facts and figures about the UNA, UNA products and UNA benefits, but also concise explanations of insurance products and their value in establishing financial well-being. At the same time, “Guide to Life” was a comprehensive explanation of the value and benefits of turning to the UNA in particular for these products.

Throughout the year – and especially during festival season – the UNA’s representatives were busy promoting the organization and its offerings, which include life insurance, endowments, and annuities, as well as various fraternal benefits. Also in the spotlight at such events were the Ukrainian National Foundation and its Soyuzivka Heritage Center. (Readers will recall that it was in January 2015 that the UNA announced it had realized its goal of charitable status for the Soyuzivka Heritage Center, as the Ukrainian National Foundation Inc., a 501(c)(3) non-profit organization became the owner of Soyuzivka.) The first festival of the season at which the UNA and the UNF were represented was the St. George Ukrainian Festival in New York City on May 20-22.

The UNA’s booth at the Ukrainian Cultural Festival at Soyuzivka turned out to be very popular with guests, especially the youngsters who were treated to beautiful and unique free face-painting by artist Athena Zhe. Ms. Zhe was a hit also at the UNA table during the Ukrainian Festival at the UACCNJ on October 1.

A notable event of 2016 for the UNA was the observance of the international Vyshyvanka Day. Staffers at the Home Office of the Ukrainian National Association, which includes not only UNA employees but also those of its two newspapers, Svoboda and The Ukrainian Weekly, on May 19 proudly wore their embroidered shirts as a visible expression of Ukrainian unity worldwide.

In July, the entire UNA community was saddened over the death of National Secretary Christine E. Kozak, the UNA’s top life insurance professional and one of three full-time executive officers. Ms. Kozak passed away on June 27 at the age of 62. She was hired as an underwriter in the UNA’s Recording Department in 1996, then rose to become director of its insurance operations and was elected as national secretary in 2002. She was re-elected in 2006, 2010 and 2014. 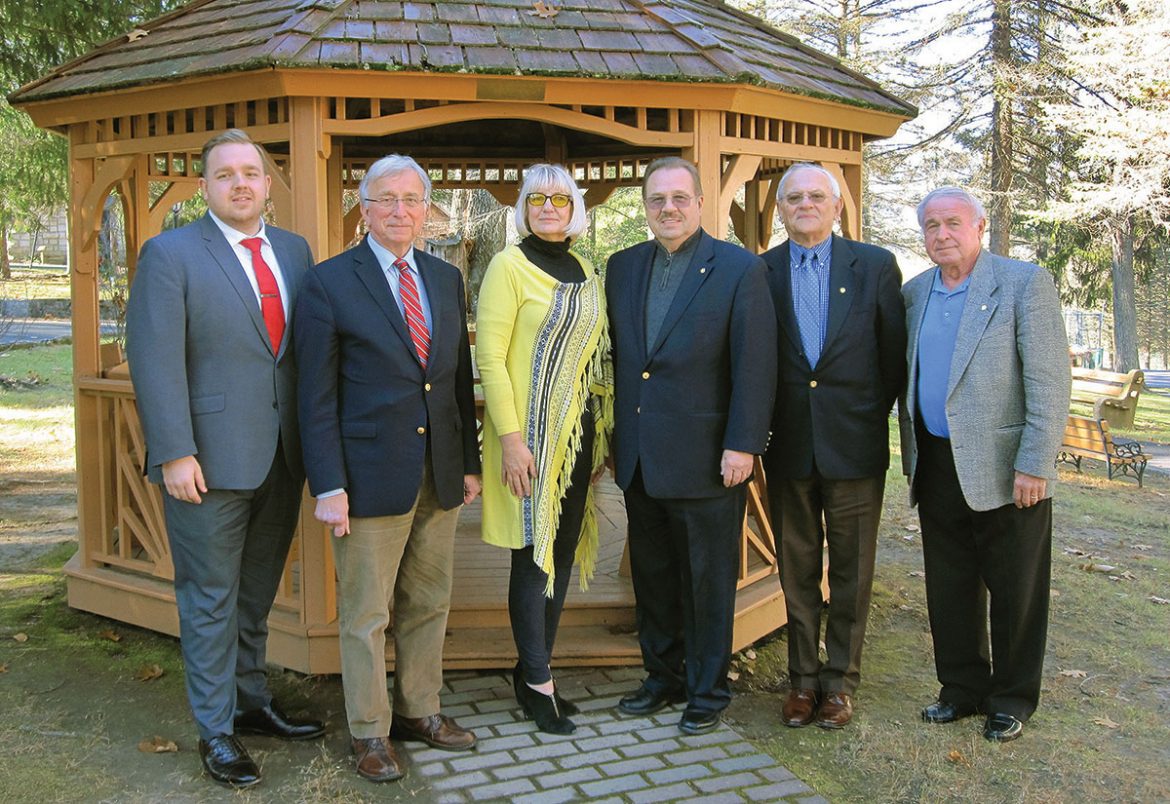 The 2016 annual meeting of the UNA General Assembly was convened at the Soyuzivka Heritage Center on November 18-19. The business sessions were marked by good news about the UNA’s continued progress during 2016 – the fourth year in a row that the fraternal organization has enjoyed net profits. In addition, during the past year the UNA’s surplus has grown by nearly $1 million and was projected to stand at $9.3 million by the end of the year. Reports were delivered by the full-time executive officers of the UNA, President Stefan Kaczaraj and Treasurer Roma Lisovich, as well as Deputy National Secretary Yuriy Symczyk. All other General Assembly members – executive officers, advisors and auditors – as well as the editor-in-chief of the UNA’s official publications, Svoboda and The Ukrainian Weekly, had the opportunity to deliver addenda to their written reports.

Meanwhile, at Soyuzivka, there were several new developments. In March, Roma Lisovich, treasurer of the Ukrainian National Foundation, reported that renovations of Soyuzivka’s Main House were in full swing. She noted: “The right wing of the second floor has been stripped to the studs, leaving the bare bones structure. Plumbing is being fixed and new bathrooms, walls, ceilings and light fixtures, as well as carpeting, are being installed. Each renovated room will have its own air conditioning/heating unit installed in the wall, allowing guests to control the settings. In addition, the balcony rooms have been beautified with the installation of new screened-in French doors.” In addition, paving projects were completed and a major renovation of the reservoir was under way.

Over 3,000 visitors flocked to the Soyuzivka Heritage Center for the 10th Ukrainian Cultural Festival on July 8-10. Oksana Mukha of Lviv, and Kyivans Ivo Bobul (originally from Chernivtsi) and Viktor Pavlik (originally from Terebovlia, Ternopil Oblast) were the show’s headliners. They were joined by virtuoso violinist Vasyl Popadiuk, master bandurist Victor Mishalow and vocalist/musician Oleh Skrypka. Also on the bill were two perennial festival favorites, the Dumka Chorus of New York and the Roma Pryma Bohachevsky Ukrainian Dance Workshop, as well as the folk musicians known as Hurt Udech. License plates from various parts of the United States and Canada were spotted entering Soyuzivka: Nebraska, New Hampshire, Massachusetts, Illinois, Ohio, Pennsylvania, Maryland, Delaware, Ontario and Quebec, and from the tri-state area of New York, New Jersey and Connecticut.

Another special feature of the 2016 festival was the Ukrainian Artisan Village, a depiction of Ukrainian village life with arts and crafts demonstrations, information on the folk uses of various plants, as well as folk singing, all presented by artisans and artists coordinated by Halyna Shepko of nearby New Paltz, N.Y. In addition, there were crafts activities for children. Of course there were also the annual varenyky-eating competition, a vendors’ marketplace and a food court.

As the festival was getting under way on Friday evening, a fund-raising gala on the theme of “Solidarity with Ukraine” was taking place on the expansive lawn of the Lviv camp. More than 100 people attended the event, held under a beautifully decorated party tent. The reception, which included a cocktail party, a five-course dinner and performances by the festival’s top stars, was sponsored by the Ukrainian National Foundation in cooperation with the Ukrainian Catholic University of Lviv. A total of $33,000 was raised for the UCU rehabilitation center via the fund established in memory of Markian Paslawsky.

Another notable event at Soyuzivka was the annual Miss Soyuzivka Contest, which this year marked its 50th anniversary. Crowned Miss Soyuzivka 2017 at the August 13 events was Irene Kulbida of Niskayuna, N.Y.; Teya Lucyshyn of East Aurora, N.Y., was voted the runner-up.

Anna Zayachkivska, Miss Ukraine 2013, visited the Soyuzivka Heritage Center and met on July 27 with campers enrolled in the dance and Sitch sports camps.

Later in the year, the Tennis Camp celebrated a significant milestone – its 50th anniversary – and honored one of its founders, George Sawchak, for five decades of service. The festivities took place at Soyuzivka at what was billed as a Tennis Camp reunion weekend on October 1-2.