Thank you. We feel it’s important to begin our year in review section about The Ukrainian Weekly with these words. As a community newspaper, we are grateful to our partners in this endeavor. First of all our publisher, the Ukrainian National Association, without whom The Weekly and our sister publication Svoboda would not be possible. Second, to our subscribers, who are the raison d’etre of any publication. Third, to our benefactors, whose generous donations go a long way toward helping this newspaper continue its mission. And fourth, to our advertisers whose advertising dollars also are key to the bottom line.

There is yet another group of partners who deserve special recognition: all the community activists who submit stories and photos to The Weekly. You, dear readers, see their work in each and every issue of this newspaper, though their contributions might be most noticeable in certain special issues we produce every year.

For example: our Ukrainian Debutante Balls issue – the 19th annual edition of which appeared on April 7 – featured stories and photos from five debutante balls in New Jersey, Illinois, Pennsylvania and New York sent in by their organizers. (Incidentally, all these organizers had advertised their debutante balls in our newspaper, so we knew they were taking place and made sure we had their reports in our special section.) 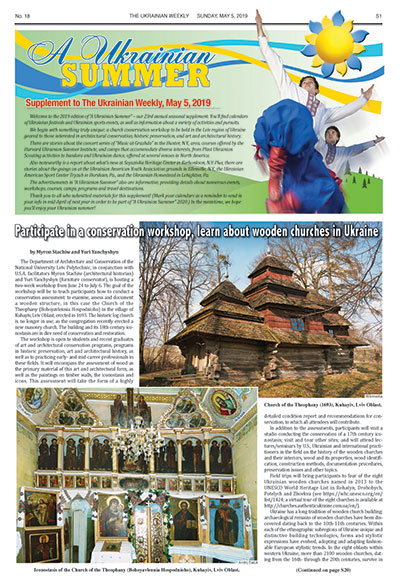 The 23rd annual edition of “A Ukrainian Summer” appeared as a supplement to The Ukrainian Weekly’s May 5 issue.

Right after we finished that special issue, we began planning for another perennially popular feature: our special supplement called “A Ukrainian Summer.” As is our tradition at The Ukrainian Weekly, it appeared in the first issue of May. (Please make a note of that for 2020.). Included in our 23rd annual edition of “A Ukrainian Summer” was a calendar of Ukrainian festivals spanning the period from May through September, as well as a Ukrainian Sports Calendar prepared in cooperation with the Ukrainian Sports Federation of the U.S.A. and Canada (USCAK), plus information about all manner of summertime activities. Once again, it was all possible thanks to our partners.

In mid-May, we had to address a bread-and-butter issue: lapsed subscribers. Our administration advised us that we had a significant number of folks whose subscriptions were way past due. The administration assured us that readers get at least two reminders in the mail asking them to renew; unfortunately, some readers had chosen to not respond to such reminders, and some later claimed they never received a bill. Our May 19 editorial noted: “Our solution is straightforward: Take a look at the mailing address stamped on the top right of your copy of The Weekly. There, just above your name, is a six-digit number that indicates the year/month/date when your subscription is up. For example, if it says 190519, that means your subscription expires on May 19, 2019. Similarly, when you log in to read The Weekly online at www.ukrweekly.com by entering your e-mail address and your password, you will see a date when your online subscription expires.” Thus, you can easily see when it’s time for you to re-up with us. And you can certainly take action to not let your subscription lapse. 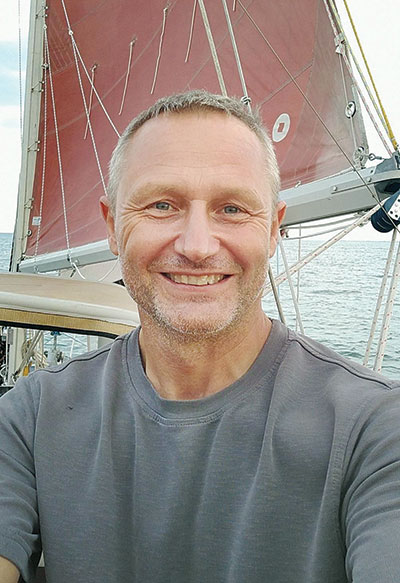 Our June 9 editorial focused on our digital archives. We asked: “Have you visited the online archives of The Ukrainian Weekly (www.ukrweekly.com)? How about those of our sister publication, the Ukrainian-language newspaper Svoboda (svoboda-news.com)? If you haven’t, you should make time to take a look. You won’t be disappointed, we promise. In fact, you are likely to be quite surprised and highly impressed. Why? Svoboda’s archives begin with its very first issue published on September 15, 1893. Yes, 1893! That’s not a typo. And The Weekly’s begin with its premiere issue dated October 6, 1933. That’s 23,260 issues of Svoboda and 4,399 of The Weekly.” They’re all there thanks to the incredible work done by our webmaster and digital archivist, Ihor Pylypchuk, as well as generous donations from several community institutions and an anonymous donor, all of whom are acknowledged online as sponsors of the archives, which are freely accessible to one and all. We invited readers to discover for themselves the wealth of information in our online archives.

On October 6, our editorial marked the 86th anniversary of The Ukrainian Weekly, born in 1933 thanks to the initiative of Svoboda’s visionary Editor-in-Chief Luke Myshuha, whose concept of “two homelands” proclaimed that Ukrainians could at once be true patriots of Ukraine and loyal citizens of the countries where they resided. We noted that one of the points in the UNA’s Mission Statement is: “The Ukrainian National Association exists: to preserve the Ukrainian, Ukrainian American and Ukrainian Canadian heritage and culture,” and we underscored: “A key role in fulfilling that mission continues to be played by the UNA’s two newspapers.”

Other topics of The Weekly’s editorials in 2019 ranged from the fate of Ukrainians held as political prisoners by Russia to the significance of our “kredytivky” (credit unions), from Ukraine’s presidential election to the Ukrainian diaspora’s media, from Ukraine’s anniversary of independence to the Zelenskyy-Trump relationship and the correct spelling of Ukraine’s capital: K-Y-I-V.

During 2019, we were pleased to work with Col. Andrii Ordynovych, the military attaché at the Embassy of Ukraine in the U.S., who wrote two major articles on significant topics. His article “The Day of Remembrance and Reconciliation” (published May 12) pointed out that “the Soviet government – as now has Russia – has always tried to avoid the term ‘World War II’ in order not to draw attention to the international activities of the USSR from August 1939 to June 1941,” when the USSR was an ally of Germany. Col. Ordynovych also wrote about Ukraine’s role in World War II and its contributions to the defeat of Nazi Germany. His news analysis, titled “The catastrophe of МН17, July 17, 2014” (published July 28), spelled out how, from day one, Russia has attempted to mislead the international community and the investigation into the downing of Malaysia Airlines Flight 17 and has denied any role in the shootdown of the passenger jet.

In Kyiv, our colleague Mark Raczkiewycz, whose exceptional work for The Ukrainian Weekly surely was appreciated by readers, left our staff as of mid-June 2019 to seek other opportunities in journalism. He had been our chief correspondent in Ukraine since July 2016 (although he was already familiar to us since 2011, when his first byline appeared in our paper).

We scrambled a bit to find someone who could cover the news from Ukraine for our readers here in North America, and we were lucky to find a colleague from the past, Bohdan Nahaylo, whom readers may recall from the days when he was an analyst writing for Radio Free Europe/Radio Liberty. We also began working with a young journalism grad from Taras Shevchenko National University in Kyiv, Roman Tymotsko, who gave us another perspective on developments in Ukraine and concerning Ukraine. Mr. Nahaylo began writing for us in July, while Mr. Tymotsko’s first byline was in September.

Here in Parsippany, The Weekly’s staff still includes Editor-in-Chief Roma Hadzewycz (who is also editor-in-chief of Svoboda), Editor Matthew Dubas and a part-time editorial assistant, Christine Syzonenko, whose photography skills are often on display on our pages.

Mr. Pylypchuk, Svoboda’s layout artist and our newspapers’ all-around tech guru and webmaster, was with us through August 1. On August 4 he began the fulfillment of a long-held dream of sailing around the world. Thus, our production staff is now a staff of one. Stefan Slutsky is the layout artist for both The Weekly and Svoboda, and his artful design touches are evident in each and every issue. Mr. Slutsky also does layout design for the UNA, most notably UNA advertisements and brochures. In related news, Anton Golovin has taken over the duties of webmaster for both newspapers.

Meanwhile, Mr. Pylypchuk set sail from New Jersey, crossed the Atlantic Ocean; visited the Azores and the Canary Islands; crossed the Equator to reach Cape Verde; sailed across the Atlantic again, with Brazil as his next destination; and then sailed down the eastern coastline of South America. By the end of the year, Mr. Pylypchuk was in Argentina, heading toward Cape Horn and the Pacific Ocean. He is sailing solo on a 37-foot ketch (Beneteau Evasion 37) named Aeneas in honor of the sailboat he sailed with two colleagues back in the day in Ukraine. We wish Mr. Pylypchuk fair winds and following seas, and pray that St. Nicholas, patron saint of sailors, protects him.

Also notable for us in 2019 were several events that were fund-raisers for the UNA Publications Endowment Fund, whose goal is to ensure the future of the two most important newspapers serving the Ukrainian American community. The fund exists under the aegis of the Ukrainian National Foundation, а 501 (c)(3) organization that performs charitable activities on the UNA’s behalf. First was the gala on the Friday evening (July 12) of Soyuzivka’s annual Ukrainian Cultural Festival and then the UNA’s 125th anniversary celebration (October 20) in the Philadelphia area. The editor-in-chief of Svoboda and The Ukrainian Weekly was a featured speaker at both events. The UNA’s 125th anniversary gala concert in Morristown, N.J., aimed to raise funds for the same cause. On November 10, the UNA released its first financial report of donations received for the UNA Publications Endowment Fund. Also significant: the UNA’s Christmas card project for 2019 announced that the endowment fund would be the year’s primary beneficiary.

In closing, we express thanks to all those who have supported our work here at The Weekly during 2019. It is significant that our Press Fund (which is separate from the aforementioned Endowment Fund) recorded a total of $24,622 in donations, an increase of over $600 from last year.

At the same time, we ask that you share with others the importance of subscriptions, which sustain our publication. Many, you see, use our newspaper when it fits their particular need (e.g., to promote an event or project), yet do not support The Weekly with their subscriptions. The truth of the matter is this: Without subscriptions we would not exist. Without subscriptions, there would be no newspaper to use when the need arises… Therefore, if you value our Ukrainian community, if you value its activities, then you should be a subscriber to our community’s most important newspaper.

As the articles in this yearender were prepared based on stories that were published in The Weekly, the sections are not credited to a particular author. The materials used were articles written by our staffers and regular correspondents, news sources like RFE/RL and Eurasia Daily Monitor, and submissions by local community activists.