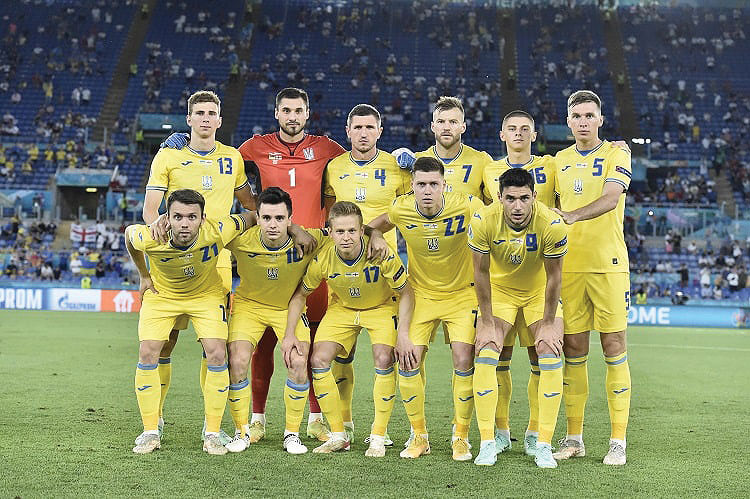 The starting 11 of Ukraine’s national team before their match against England during the quarterfinal of the Euro 2020 soccer tournament.

SOUTH WINDSOR, Conn. – Their 4-0 drubbing at the feet of England in their quarterfinal match on July 3 in Rome should not detract from Ukraine’s accomplishments at the 2020 European Championships. Coach Andriy Shevchen­ko’s national team finished undefeated in their qualifying stage, atop powerful Portugal. In group competition they put a serious scare into the Netherlands (a 3-2 loss), somewhat easily defeated an inferior North Macedonia (2-1), and played very cautiously in a 1-0 timid showing against Austria. Somehow they survived as one of the top third-place teams and earned a slot into the round of 16, where the Ukrainians surprised an undefeated Sweden with a 3-2 win in extra, extra time. Ukraine was one of the remaining eight out of a starting 24 nations heading into its match versus England, an achievement few, if any, European football experts could have predicted. Oh, and how super, great, cool was it to watch Ukraine on a national broadcast network (ABC) on a Saturday afternoon (East Coast time)?

The matchup of Ukraine and England was really one of a young, inexperienced national team going up against a strong, experienced European powerhouse. Ukraine was outplayed by a superior opponent in every way. Star forward Harry Kane scored twice in the one-sided 4-0 win, putting England ahead inside the first four minutes of the game. Two more goals came early in the second half, one from Harry Maguire and another by Kane. Substitute Jordan Henderson got the fourth at the 63 minute mark.

Three specific British forwards were too hot for Ukraine to handle, with Raheem Sterling and Jadon Sancho joining captain Kane in outstanding play in wide areas. Sterling, who was a terror on the Ukrainian defense down the left, played in Kane, who poked the ball past Ukrainian goalkeeper Heorhiy Bushchan at four minutes. Ukraine’s Roman Yaremchuk forced a save from England’s Jordan Pickford and a Declan Rice pile driving shot was kept out by Bushchan, leaving England looking pretty comfortable up through halftime.

Ukraine gathered some momentum after injured defender Serhiy Kryvtsov was replaced by winger Viktor Tsygankov in the 36th minute. Ukraine finished the first half strongly, only to come out asleep in the second half, allowing England to score again less than a minute after the restart when a foul on Kane set up Luke Shaw to deliver a free kick from the left for Maguire to head into the net. Four minutes later Sterling supplied the overlapping Shaw and he crossed to a rejuvenated Kane for a header past Bushchan. The fourth goal was still another header from Henderson, the first of five substitutes sent on by England coach Gareth Southgate, who was planning strategy for his upcoming semifinal long before this quarterfinal was officially concluded.

Shevchenko’s squad came up short in their bid to take the country to a first ever major tournament semifinal.

“We had good parts of the game, but set pieces did not work very well for us today,” said coach Shevchenko in a post-match press briefing. “I am really happy with how the team performed. I want to thank the players for their attitude today.”

Despite their fortuitous qualification into the knockout phase, Shevchenko’s players trusted in the process and culture developed by their young coach. They kept Shevchenko’s words at the forefront of their minds throughout the competition. “My message to the players was to believe, we are here and this is our chance to change the future,” he had told them prior to the Sweden match.

This was achieved with the victory over Sweden. Several steps forward were thrust a bit backward with the poor showing against England. They won the uphill battle with Sweden, but failed to navigate the English mountain. Their next challenge is to qualify for the 2022 World Cup 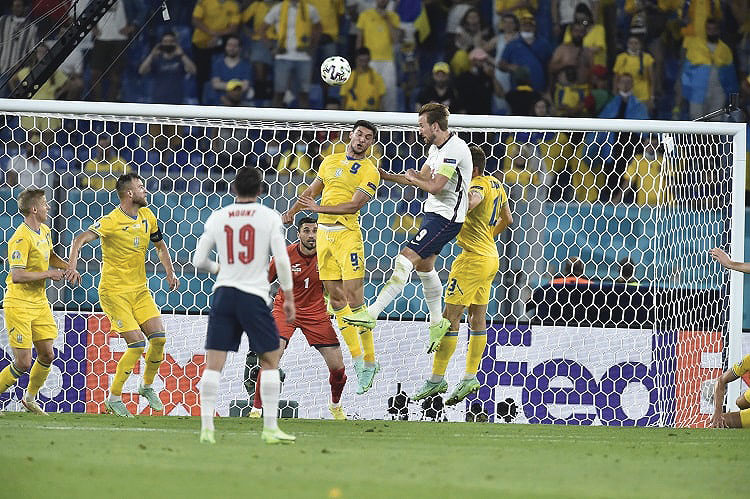