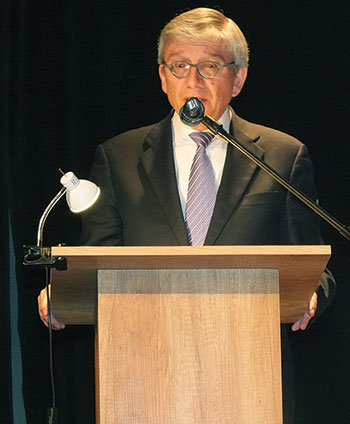 TORONTO – Ukrainian World Congress (UWC) President Eugene Czolij on May 1 participated in a commemoration of the 50th anniversary of the UWC in Poland organized by the UWC member organization Union of Ukrainians in Poland.

Mr. Czolij delivered the keynote address during the commemoration held at the National Home in Przemysl (Peremyshl), which had been confiscated by the Polish Communist regime in 1947 during Akcja Wisla and returned in 2011 to the Ukrainian community by Polish governing authorities.

Presenting a historical overview of the UWC, Mr. Czolij focused on the many achievements of the organization throughout its 50-year history, including the UWC’s efforts to secure the return of the National Home to the Ukrainian community in Poland. He also called upon Ukrainians in Poland to continue working with the UWC and the Ukrainian diaspora in supporting Ukraine in the defense of its territorial integrity.

The commemorative program also included a screening of the short documentary film “50 Years of the Ukrainian World Congress.” 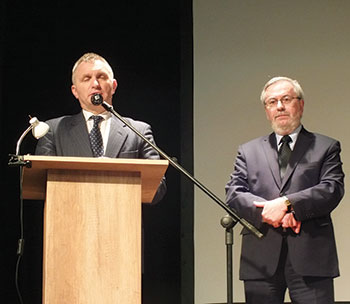 Petro Tyma, president of the Union of Ukrainians in Poland, speaks at the anniversary banquet. On the right is Jerzy Rejt, the organization’s first president (1990-1996).

“The Ukrainian World Congress congratulates the Ukrainian community in Poland on raising awareness of the UWC and its activities during this 50th anniversary year and calls for the further strengthening of its cooperation with the UWC in attaining common goals,” stated Mr. Czolij.

The UWC is the international coordinating body for Ukrainian communities in the diaspora representing the interests of over 20 million Ukrainians. The UWC has a network of member organizations and ties with Ukrainians in 53 countries. Founded in 1967, the UWC was recognized in 2003 by the United Nations Economic and Social Council as a non-governmental organization with special consultative status.