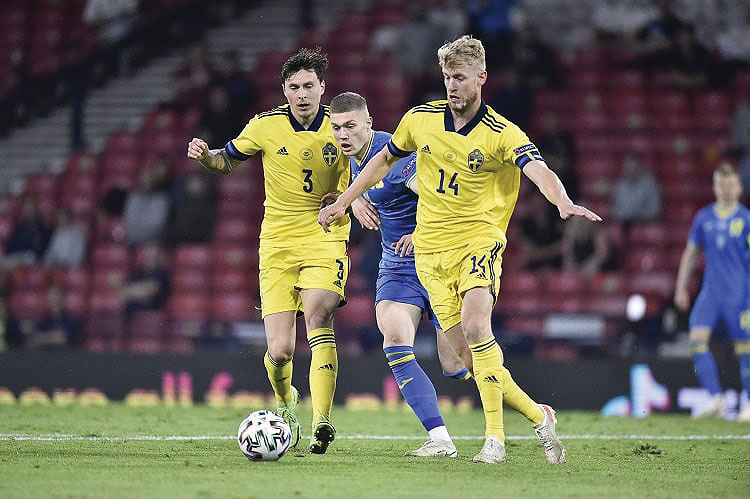 Artem Dovbyk fights for the ball against Swedish players Victor Lindelof (No. 3) and Filip Helander (No. 14) in Ukraine’s round of 16 match in Glasgow on June 29.

SOUTH WINDSOR, Conn. – Andriy Shevchenko’s playing experience was a big bonus as Ukraine’s all-time scorer (48 goals) led the national soccer team into a final tournament for the first time as a coach. The 44-year-old served as Ukraine’s captain at the 2016 FIFA World Cup, led the line during UEFA Euro 2012, and was a Champions League-winning striker with AC Milan. Ukraine’s coach since 2016, he shared his football wisdom with his players at UEFA Euro 2020.

Shevchenko’s participation in big tournaments such as the European Championship and the World Cup helped him instruct and motivate his players. Simply participating in the Euro tournament is a great experience. The atmosphere, team camaraderie and understanding the meaning of these important games are an integral part of the experience. Small details play a big role in major tournaments.

Heading into Euro 2020 under Shevchen­ko, Ukraine found a balance between defensive solidarity and attacking creativity with Andriy Yarmolenko playing the role of senior attacker, while talents like Ruslan Malinovskyi, Roman Yaremchuk and Oleksandr Zinchenko were maturing into key, relevant performers on the pitch. Shevchenko has been given due credit for instilling a winning mentality in his players.

At Euro 2020, Shevchenko’s squad was more a work in progress than a finished product. His team came on strong late against the heavily favored Netherlands (a 3-2 loss), putting a serious scare into what experts considered a European powerhouse. They dominated North Macedonia (2-1 win) at the outset of their second game and seemed to perform most cautiously against a strong Austria outfit (1-0 loss), looking like they were playing for a draw in hopes of advancing to the knockout stage. Somehow through the ill fortunes of others, Ukraine made it into the next 16, paired against Sweden, a matchup of two blue and gold outfitted clubs.

Sweden and Ukraine met for the first time since 2012 in the UEFA Euro 2020 round of 16 in Glasgow, Scotland, on June 29, with their last fixture holding particularly fond memories for current coach Shevchenko. It was Shevchenko who scored both goals to mark his side’s first ever win in a Euro tournament against the Swedes nine years earlier.

Yes, Ukraine reached the round of 16 with two defeats and the worst record of all advancing teams. But they nonetheless reached the quarterfinals. Ukraine eliminated previously unbeaten Sweden 2-1 with a late goal in stoppage time at the end of extra time from a player who had not played in the entire group stage. Substitute Artem Dovbyk stooped low to guide a header from Oleksandr Zinchenko’s cross past Swedish goalkeeper Robin Olsen. It was the 24-year-old forward’s first ever goal for the national team.

Coach Shevchenko was seen running down the sideline, celebrating with his players, who next flew to Rome where they faced England in the quarterfinals on July 3 (see story on page 14 for more coverage of that game).

Zinchenko scored Ukraine’s first goal, giving his team the lead in the 27th minute when he rifled in a low shot set up by a slick pass from captain Yarmolenko. Emil Forsberg’s deflected shot from outside the area in the 43rd minute equalized for Sweden. It was Forsberg’s fourth goal at Euro 2020, but a fifth goal eluded him in the second half despite curling shots off the post and the crossbar. Sweden had four superb scoring chances in the second half, but could not tally a second goal.

Momentum in the match shifted dramatically in extra time when Sweden defender Marcus Danielson was sent off in the 98th minute with a red card for following through on a challenge with a raised boot on Ukrainian Artem Besedin. The game lost much of its rhythm and flow in scrappy extra time periods littered with fouls, injuries, exhausted players and an argument between the two coaches. 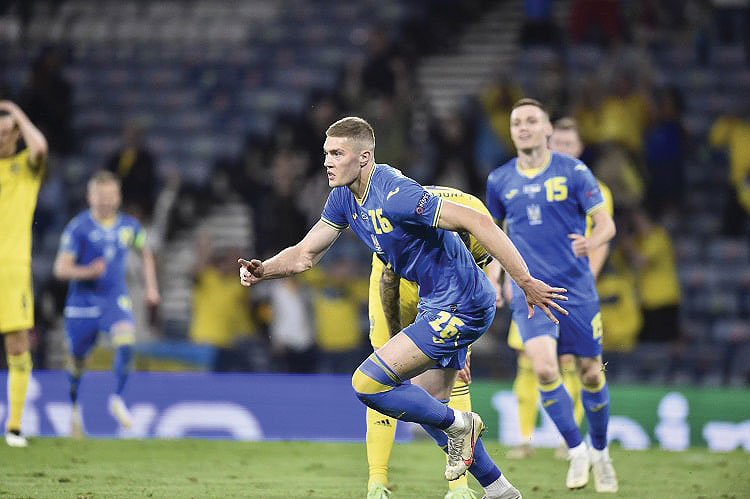 Artem Dovbyk celebrates the game-winning goal against Sweden in Glasgow on June 29 in the round of 16.

“It was a really hard game,” Shevchenko said in a post-game media session. “Everyone understood that the prize at the end was great. We needed to be strong and the players showed it today.”

Sweden coach Janne Andersson said he confronted his counterpart Shevchenko because he felt the Ukrainians were diving a bit toward the end.

To get to Glasgow, Ukraine needed a favor from Sweden to advance. Ukraine would have been out if Poland had defeated Sweden in its final group match. Sweden won that game 3-2 with Forsberg scoring twice.

Neither team had ever won a knockout game at a European Championship in a combined eight previous tournaments. Both often-cautious squads played more freely in a wide-open 90 minutes, trying to grab a chance for a deep run in the arguably weaker half of the draw.

Ukraine’s key creator had been Yarmo­lenko, who plays in England for West Ham. In setting up Zinchenko’s goal, Yarmolenko used the outside of his favored left foot to drift a curling pass across seven defenders toward their blind side in the penalty area. After scoring with a first-time shot, Zinchenko ran away with a finger to his lips in a gesture he said was to quiet critics.

“In the first three games we received a lot of criticism, which I think we deserved.” He said to the media via a translator. “I showed that they need to support us.”

An exhausted Yarmolenko was taken off the field for the final period of extra time, making way for Artem Dovbyk to come on and score the winning goal. Dovbyk’s game-winning goal made history as the latest match-winning finish in European Championship history, coming at 120:37.