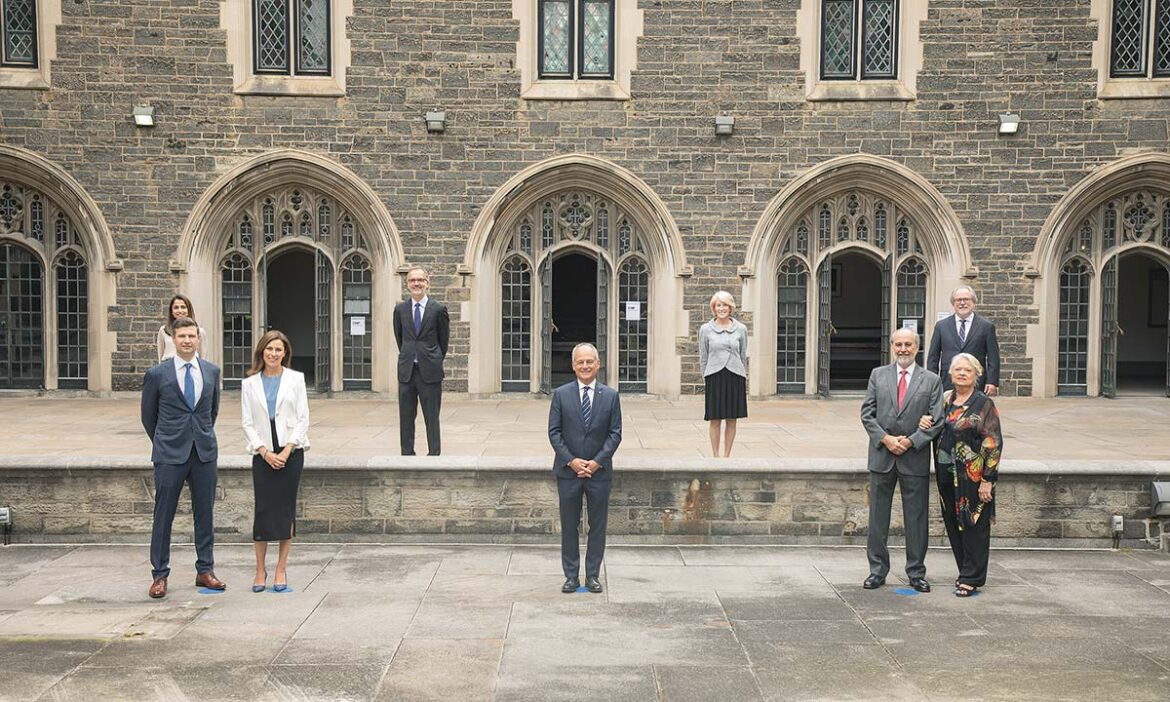 At the University of Toronto when the Temerty Foundation announced its gift of $250 million to the university’s Faculty of Medicine are: (back row, from left) Hira Raheel, Trevor Young, Rose Patten, David Palmer, (front row) Mike Lord, Leah Temerty-Lord, Meric Gertler, Jim Temerty and Louise Temerty.

TORONTO – An unprecedented $250 million gift from the Temerty Foundation to the University of Toronto’s Faculty of Medicine announced on September 24 marks an exciting new era in a long and distinguished history of leadership, discovery and collaboration at the university.

For more than a century, U of T Medicine, along with its partner hospitals, has led the world in advancing human health and health care, from the discovery of insulin and stem cells to developing the first pacemaker and identifying the genes responsible for early-onset Alzheimer’s. Today, the faculty is ranked No. 1 in Canada and among the best globally in cutting-edge research and innovation.

In addition to a new Center for AI Research and Education in Medicine, new funding for research and collaboration across hospital partners and an iconic new medical building in downtown Toronto, U of T’s newly named Temerty Faculty of Medicine will establish the Education and Research Fund for Collaborations with Ukraine. The fund will support visiting fellows, professors, scholars and students from Ukraine and encourage increased collaboration with academics and researchers from the Faculty of Medicine. The fund will also include scholarships for students from Ukraine.

“International partnerships are a vital area of our work,” said Dr. Trevor Young, dean of the Temerty Faculty of Medicine. “Each year, our clinicians, researchers and learners lead and participate in many initiatives with peers from around the world. These include important capacity-building efforts, as well as educational and research collaborations. I am delighted that, thanks to the Temerty family’s support, our new Education and Research Fund for Collaborations with Ukraine will support new and enhanced partnerships with Ukrainian health institutions.” 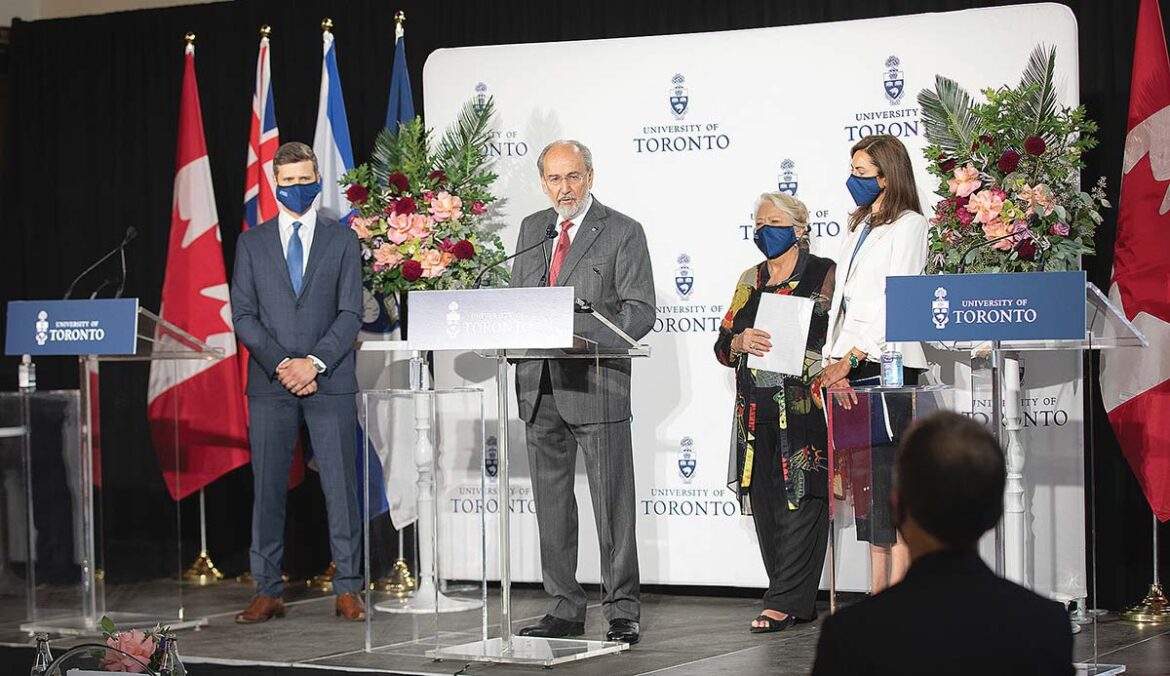 At the announcement of the $250 million gift from the Temerty Foundation to the University of Toronto’s Faculty of Medicine (from left) are: Mike Lord, Jim Temerty, Louise Temerty and Leah Temerty-Lord.

It’s all part of a bold vision to capitalize on U of T’s strengths and support the game-changing ideas that will help people live longer, healthier lives, both in Canada and abroad.

“In conjunction with Dr. Myroslava Romach from the University of Toronto’s Department of Psychiatry, I’ve travelled to teach and help ‘train the trainers’ in Ukraine at least once a year for many years,” says Dr. James Rutka, chair of U of T’s Department of Surgery. “Some of our most valued career experiences have been in participating in international capacity-building and educational experiences there. We have also had the great pleasure of hosting Ukrainian clinicians and trainees here in Toronto. Everyone involved benefits – both the Canadians and the Ukrainians. We are grateful to the Temerty family for helping strengthen health research and educational partnership between our two countries.”

The Temerty Foundation has been a long-standing supporter of the Ukrainian community, diaspora and causes important to Ukraine. The Temerty family established the Temerty Contemporary Ukraine Program at Harvard; the Ukraine in European Dialogue at the Institute for Human Sciences in Vienna; the Kyiv Mohyla Business School; Help Us Help; Atlantic Council’s Ukraine in Europe Initiative; and the Holodomor Research and Education Consortium.

James Temerty has dedicated his career to green energy, technological advancements and giving back to the community. The family of Mr. Temerty, who was born in Ukraine, moved to Canada in 1950. He worked for IBM before launching an entrepreneurial career, starting with a franchise of ComputerLand that he built into the largest chain of ComputerLand stores in the world. This was followed by the founding of Northland Power. The company was created with innovation and environmental stewardship at its core. Starting with the first large-scale biomass generation project in Canada, to high-efficiency clean natural gas cogeneration, to early adoption of onshore wind and utility scale solar generation, the company has led the way in Canada. Northland’s common shares trade on the Toronto Stock Exchange with a market cap exceeding $7 billion. Along the way Mr. Temerty was also instrumental in the formation of SoftChoice Corp., which he chaired for 16 years.

Mr. Temerty’s entrepreneurial career and philanthropic endeavors have been recognized with many distinguished honors. In 2008, he was appointed a member of the prestigious Order of Canada in recognition of his contributions to society. In 2010, he was awarded the Ernst and Young Entrepreneur of the Year Award in Canada. Mr. Temerty received the Queen Elizabeth II Diamond Jubilee Medal in 2012 to honor him for his contributions to his country. In 2013, Mr. Temerty was the first recipient of the Metropolitan Andrey Sheptytsky Medal, an award established to recognize contributions to the cause of Ukrainian-Jewish understanding and cooperation. In 2015, he was honored by President Petro Poroshenko with Ukraine’s Order of Yaroslav the Wise, which is the highest tribute Ukraine can confer on a foreign citizen who has not been a head of state.