After living in Wiesbaden, London and Kyiv for 15 years, my husband Ihor and I moved back to Concord, Mass., to resume our life. Except that we had unalterably changed. And I was about to discover new dimensions of gratitude for reconnecting with Wolodymyra Tesluk. From the time I was about nine, she was my Ukrainian school teacher. As we lived on the same street in the south end of Hartford, Conn., she and I would march, two evenings a week, to the school about a mile away. I could hardly keep up with her brisk pace. 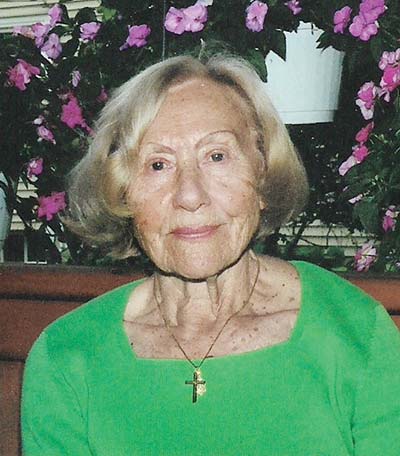 When I began visiting her at her home in Hartford, beginning in 2007, she was in her mid-80s. She had hardly changed, still elegant, stubbornly vigorous, bursting with ideas. As I walked into the living room, a cat lounged on the couch, a vase of red carnations and a stack of books sat on the coffee table. I would be ushered into her kitchen, where a pot of split pea soup simmered. It nourished my entire being, her no-nonsense recipe for life.

During these afternoons, I felt I was getting older as she appeared to grow younger. Three hours floated away as we abandoned ourselves to our favorite topics: U.S. politics, Ukrainian politics, history, literature, religion, health, nutrition. Sometimes Pani Wolodymyra would gleefully quote racy jokes from the latest edition of a Polish newspaper on the table. She often recited the poetry of Ivan Franko and when she declaimed from “Moisei,” her voice trembled and tears welled up in her eyes. When I asked her questions about a Ukrainian translation of my novel “Displaced,” which was about to be published in Kyiv, she searched in dictionaries and a thesaurus for the exact nuance of a word. She confided that, “After supper, I climb into bed, and the world washes away, as I pore over essays and books with my dictionaries beside me”.

It was exciting and intense with her those afternoons. Through her lens, I was reclaiming my role as student. Both of us were finding our position in the universe. Her sharpness of intellect, amazing memory and wry humor pervaded her observations. She would catapult from Khmelny­tsky and Mazepa, to Hitler and Stalin, honing in on these figures like a bumblebee, dancing around their perimeters, then extracting the nectar. Swathes of history came alive as she dissected the reign of King Danylo, Tatar raids, the reigns of Ukrainian princesses who married into European royal families. She talked about the problem she saw with the diaspora that focused on the tragedies besieging Ukraine rather than on the great periods of their history.

During World War II, when Pani Wolodymyra was 22, her father put her on a train in Ivano-Frankivsk bound for the West. She was never to see her parents again. During our afternoons, she reminisced about her student days at the Ukrainian Free University in Munich. She started a dissertation in philosophy, but was not to finish it as she emigrated to the United States. Waitressing in a Ratskeller, she met Joseph Tesluk, a student who was finishing his law degree at the Ukrainian Free University. They married in Hartford in 1952 and lived 41 fulfilling years together. Sharing a passion for their cultural heritage, they became Ukrainian language instructors at the University of Connecticut.

Pani Wolodymyra gave birth to two daughters, Marta and Julia. Marta and her husband, Adrian Derhak, vigilantly took care of her in her later years. Julia, her husband, Daniel Sztul, and their children, Melanie and Oleh, would come from Paris to visit her for many summers. With delight she looked forward to her creative projects, museum and beach outings with her grandchildren

Pani Wolodymyra dedicated herself to the Ukrainian school in Hartford for 50 years. From first and second graders to adolescents whom she prepped for a certificate in Ukrainian studies, she offered them her wisdom and her heart. A tough teacher, she inspired generations of students to examine their Ukrainian identity and go out into the world, knowledgeable and articulate. She encouraged her students to write letters to the Hartford Courant about the Holodomor. She tirelessly brought Ukraine’s struggle for independence, its culture and history to the attention of local politicians.

For over 30 years, she worked as a psychiatric aide at the Institute of Living in Hartford, a discreet institution for patients with mental and addiction disorders. There, she gained a wealth of experience observing the make-up of the human psyche.

She was an active member of the Ukrainian National Women’s League of America and president of its Hartford branch. She was a member of Plast Ukrainian Scouting Organization, a devout parishioner at St. Michael Ukrainian Catholic Church who put her Christian values into practice. She canvassed for the March of Dimes and the American Heart Association. Together with her husband, she supported multiple veterans’ associations. She also played a mean hand of bridge.

On a visit to Avery Heights retirement facility, where Pani Wolodymyra spent the last years of her life, I walked into an activity room where she was poised to throw a lightweight bowling ball. She annihilated the pins, which got her a round of applause. My last impression of her was during another visit on a summer afternoon. We sat on a terrace on which stood a massive, old oak. She observed the roots, the gnarled, forked trunk, the leaves, and I felt her presence merging with the green fullness and majesty.

I see her now, waving from her front door as I walk to my car. After an afternoon of dizzying stimulus, my consciousness is firing on all cylinders. I wave, honk my horn and drive off. Farewell, my brilliant mentor. Thank you for the alchemy in your kitchen. The process of mourning begins.

Wolodymyra Tesluk passed away on May 6 in Hartford. She was 97. Her final resting place is St. Michael’s Ukrainian Catholic Cemetery in Glastonbury, Conn.