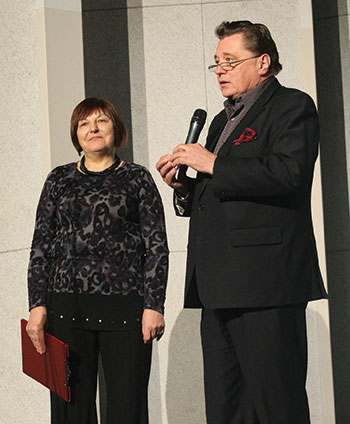 Official invitations were mailed to various dignitaries, including those who participated in the film and were interviewed in the documentary, among them Ivan Drach, Dr. Hennadii Boriak, Prof. Yurii Shapoval, Prof. Roman Serbyn.  Admission being free, volunteers handed out invitations to the general public at Kyiv subways and at universities.

Opening remarks at the premiere were given by organizer Nina Lapchynska, the head archivist at the museum.  As the tail credits of the film rolled, the audience stood, moved to tears.  This was followed by Lesia Hasydzhak, general director of the national museum, who spoke of the importance to continue researching and gathering evidence of the genocide.

Prof. Volodymyr Serhiychuk of Taras Shevchenko National University, whose mother and father were both victims of the Famine, and Oles Yanchuk of the Dovzhenko Film Studio were among those who spoke following the film.  Both emphasized how powerfully the film captures the broad scope of the genocide and the need to make the documentary available to schools and teachers throughout Ukraine. Film critic Larysa Naumova called it “very powerful.”

Contacted in Montreal, filmmaker Yurij Luhovy stated, “who would have thought then that eight decades after the Famine-Genocide, this documentary would be shown in Kyiv, knowing this whole area was once closed off to the West, gripped in terror as the man-made Famine was denied.  I am grateful to all that supported making ‘Okradena Zemlya’ and am moved it is so well received.”

“Okradena Zemlya” was produced and directed by Mr. Luhovy, and narrated by National Artist of Ukraine Bohdan Beniuk. Music is by Kyiv composer Roman Luhovy, who attended the premiere.

Filmed in eastern Ukraine, the documentary is based on survivors’ testimonies, commentaries by historians, declassified Soviet archival documents and rare historical footage.   Many areas where the documentary was filmed are no longer accessible; they have been reduced to rubble by Russia’s invasion and backing of the ongoing war in Ukraine’s east.

To complete the Ukrainian-language education version of “Okradena Zemlya” (26 minutes and 52 minutes on one DVD) for Ukrainian schools, community support is required. Both shortened school versions are done. This version could be made available to Ukrainian schools and educators very shortly with support to help pay the final lab fees. For further information readers may contact Mr. Luhovy at mmlinc@hotmail.com, see www.yluhovy.com, or call 514-481-5871.

The feature documentary “Okradena Zemlya” was endorsed by the Ukrainian World Congress.