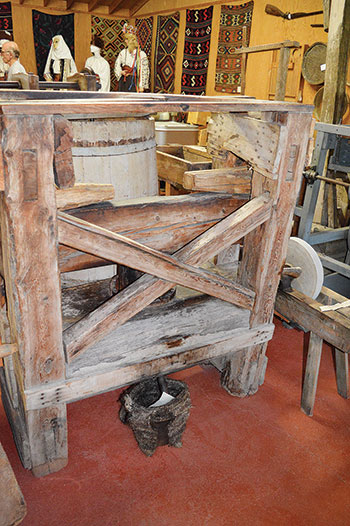 On May 14, a group of members of Alpha Omega Alumnae and friends drove one and a half hours southeast of Winnipeg and entered the world of the first Ukrainian pioneers to Manitoba 125 years ago. The region with the towns of Gardenton, Stuartburn, Tolstoi (there’s a long story on its renaming) was one of the areas where Ukrainians (mostly from the Bukovyna region) settled long ago in 1896. This day trip was a celebration of the 125th anniversary of Ukrainian settlement in Canada.

The first Ukrainian church built in Canada, in 1897, St. Michael’s Ukrainian Orthodox Church, was consecrated in 1899.* It was recognized as a Manitoba Provincial Historic site in 1974 and as a site of National Historic and Architectural Status in 1988. The descendants of the first pioneers loyally maintain the church and cemetery grounds. The cemetery crosses, with the earliest grave from 1898, tell the story of the early families, a number of children among the deceased. The descendants return to the church for the annual feast day of the patron saint of the parish (praznyk) and other events. Don Machnee led the group on a tour of the church.

Not far away from the church grounds is the Gardenton Ukrainian Museum, founded in 1965. Here the group saw an original pioneer house (awaiting a new thatched roof), an outdoor clay oven (pich) and the one-room schoolhouse. The jewel of the museum grounds is the Gardenton Ukrainian Museum itself, which has on exhibit many original cultural and utilitarian items of the first pioneers. Leonard Krawchuk of Winnipeg, a collector par excellence of Ukrainian folk everything, guided the group through the museum, explaining in detail the hand-made farm and household implements and the exquisite original folk costumes.

The day ended with a delicious Ukrainian supper of varenyky in cream and dill sauce and kovbasa. The Manitoba word for varenyky is “perogies.” Those who wanted to could stay for the dance (zabava) beginning after supper. 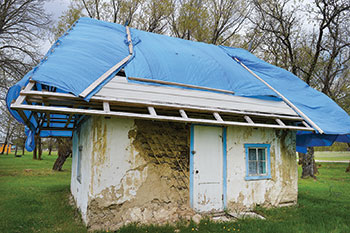 The original one-room home of the first Ukrainian settlers in Gardenton (thatched roof to be replaced).

The Gardenton Ukrainian Museum and Village Society holds many events throughout the year at the site, with the main one being the annual Ukrainian Festival. Last year, the society celebrated its 50th anniversary with a two-day festival on the grounds on July 11-12. The celebration included a church service, a full afternoon concert by Ukrainian singers, dancers and musicians, a Saturday evening zabava and Ukrainian dinners. For the anniversary, there was the unveiling of a 30-by-four-foot mural by local artist Frank Saprowich commemorating Gardenton and its Main Street in its earlier days.

This most informative trip took the Alpha Omega Alumnae members and their guests back in time. It left them with an appreciation and understanding of the sacrifices and backbreaking work of those Ukrainian pioneers. They set roots in a new land, but maintained their Ukrainian identity with pride. 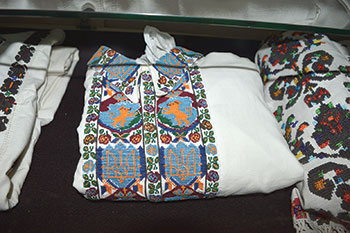 A man’s embroidered shirt (sorochka) brought from Halychyna, with the tryzub and the lion, a symbol of Halychyna and Lviv.

Helen Feniuk, AOA treasurer and membership chair, is also a board member of the Gardenton Ukrainian Museum and Village Society, and facilitated the event. Oksana Shulakewych, co-chair of the Program Committee, organized the trip.

(Alpha Omega Alumnae, founded in 1958, is a Winnipeg organization of female university graduates of Ukrainian descent. This non-profit charitable organization has as its purpose the preservation and fostering of Ukrainian culture and language in Canada; promoting the endeavors of people of Ukrainian heritage; fund-raising and awarding annual university scholarships to Manitoba students of Ukrainian heritage enrolling at an accredited university; maintaining communications with local universities; and furthering personal growth and enrichment of the membership. See https://aoalum.wordpress.com/.)

When it comes to the early pioneer Ukrainian settlements, there is much to explore throughout Manitoba. No matter in which direction you head out from Winnipeg, there will be a Ukrainian church on the horizon, a Shevchenko hall and many Ukrainian place names.

* Depending upon the source, there are a few Ukrainian churches in western Canada vying for “the oldest in Canada” status. It depends upon the year of founding, when consecrated, whether still in use and other factors.