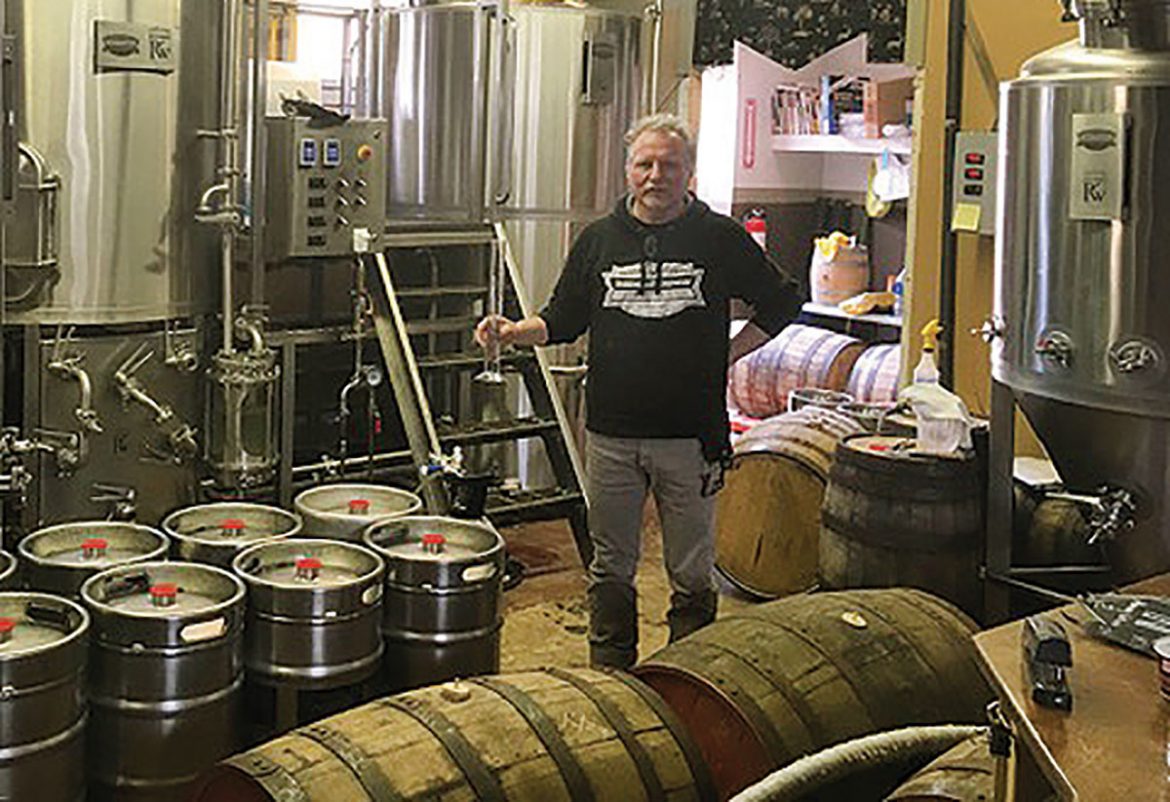 Vasyl Lenczuk gives a tour of the brewing room.

GLEN SPEY, N.Y. – For many years, the Catskill Mountains in Sullivan County, New York, have been a recreation destination for Ukrainian Americans who live on the East Coast of the U.S. and beyond.  Soyuzivka Heritage Center in Kerhonkson, Oselia SUM (CYM) in Ellenville, the Grazhda concert hall at Hunter Mountain in Jewett and the former Verkhovyna Mountain View Resort in Glen Spey drew many with special events, festivals and summer camps.  Local Ukrainian communities took root with some settling as second homeowners in the area.

Among the arrivals near Glen Spey in the 1970s was the Lenczuk family from Jersey City, N. J.  Vasyl Lenczuk recalls spending many happy hours at his parents’ summer home in Glen Spey, but it wasn’t until the 1990s with his new wife Cindy that he bought some property in the area and built his own home.  Over the years, Mr. Lenczuk had become an avid home-brewer and he transferred his equipment there.  It was here that the idea for the Shrewd Fox Brewery (http://shrewdfoxbrewery.com/) was born.

His growing interest in craft brewing was put on hold for a time while working on various assignments involving the Chornobyl reactor and other post-Soviet nuclear concerns.  In 1992 while still in college he participated as a volunteer on a medical team and in 1997 went again as an employee of the engineering firm Bechtel.  The company was involved in efforts to secure the Chornobyl nuclear power plant’s reactor and deteriorating temporary shelter.  Mr. Lenczuk and his wife, Cindy, lived in Slavutych, Ukraine, for two years to finish his work as a radiation expert. In their travels to various places they sampled the hidden and not-well-advertised local brews and began to think about opening a brewery one day when they returned home.

In the summer of 2014, Vasyl and Cindy opened the Shrewd Fox Brewery in Eldred, N.Y., not too far from Glen Spey.  “It’s a gorgeous area of the Catskills. Great water, great area. And some of the ingredients that we use are all locally sourced.  It was almost a no-brainer to build a brewery here,” said Mr. Lenczuk. “We were able to buy an old post office and slowly but surely bought components that would fit into the building. We applied for all our licenses and it probably took about a year, maybe a year and a half, to get everything squared away.” 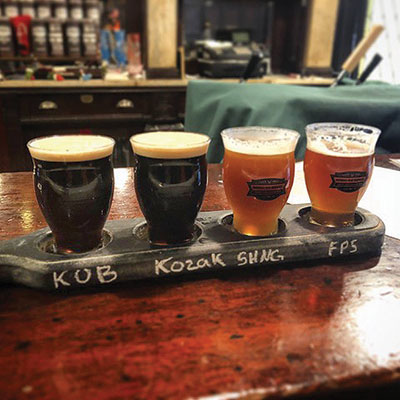 There were more than 3,800 craft breweries in the U.S. in 2014 and by 2018 the number had grown to more than 7,000. Since their brewing operation became a great success, the Lenczuks opened their second location in Glen Spey in the summer of 2018.  The main brewery remains in Eldred, while Glen Spey has a taproom, a facility for producing and storing their homemade hard ciders and a small restaurant with pub grub including some Ukrainian favorites. Shrewd Fox is probably the only Ukrainian American owned and operated commercial craft brewery in the U.S.

Shrewd Fox has a New York state farm brewery license, which means that they source 60 percent of their beer ingredients in the state of New York from local farms.  The other 40 percent of hops, yeast, malted barley and grain can come from other places like Canada, Great Britain and Europe and soon hops from Ukraine will be added.  “And then when we’re done with our spent grain it goes back to the farm for animal feeding. It’s pretty much a win-win situation,” points out Mr. Lenczuk. “It’s a great relationship with New York State, which offers tax benefits and allows us to self-distribute our products so we don’t have to go through a distributor. So as long as we stay within that 60 percent requirement for local ingredients we can do some interesting things and be competitive.”

The brewery offers a range of interesting beer including a Ukrainian Kozak Porter that is brewed with coffee and chocolate (some of the batch is bourbon-barrel-aged), which is a nod to the flavors of Lviv and a Kutya Osela Winter Farmhouse Ale made with buckwheat and buckwheat honey during the Fall and available for the Christmas season.  And, they also make some English and Scottish fermented hard ciders.

“We’re doing canning and bottling for local distribution and hope to have our beer in taverns, stores and markets in the Eldred area by July,” said Mr. Lenczuk.  Shrewd Fox has offered their beer at a number of local Catskill festivals and events.  On September 28 they will hold their own “Uktoberfest” at the brewery with their beer, Ukrainian food and entertainment available for the public. And, there has been some initial discussion about the possibility of distributing their unique brew in the New Jersey and New York area (including at Veselka, the Ukrainian restaurant in New York City).

You can listen to a Krynytsya podcast interview with Mr. Lenczuk here.

Mike Buryk is a Ukrainian American writer whose research and articles cover a wide variety of topics. In addition to “Krynytsya,” he also hosts and produces another monthly podcast, “Made in Ukraine Tech Startup Edition” (https://soundcloud.com/ukrainetech). You can reach him at michael.buryk@verizon.net.