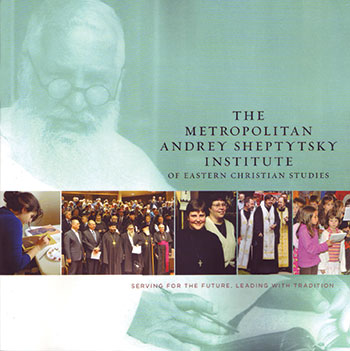 Cover of the 25th anniversary report of the Metropolitan Andrey Sheptytsky Institute of Eastern Christian Studies.

At a time when events in Ukraine seem so unremittingly dark and gloomy, the recent publication of the 25th anniversary Jubilee Report of the Metropolitan Andrey Sheptytsky Institute (MASI) comes as a welcome antidote.

Arriving on the occasion of the 150th anniversary of the death of Metropolitan Sheptytsky, the report is glorious testimony to the triumph of a brilliant vision, the motto of which is: “Serving for the Future, Leading With Tradition.”

The institute was conceived in 1986 by Father Andriy Chirovsky “as a solution for some of the most urgent issues facing the Eastern Churches.” There was a need for “an institution of higher education where the Eastern Christian tradition – in dialogue with Western thought – would be studied in its various forms.” The goal was “to provide leaders confident of this tradition’s power to change lives today.”

Serving parishes in Chicago while teaching at the Catholic Theological Seminary (CTU) – the largest Catholic school of ministry in the United States – Father Chirovsky conceived the idea of a graduate-level summer program at an Eastern Catholic Monastery, during which students would take classes and participate in the full monastic schedule of fasts, feasts and worship.  A proposal was presented to the entire faculty of CTU  and approved unanimously.

The beginnings were not easy, especially after Father Chirovsky underwent a failed back surgery, forcing him to suffer severe pain for which there is no cure. Father Chirovsky ignored the pain and soldiered on.

Archimandrite Boniface Luykx, hegumen of Holy Transfiguration Monastery (Mount Tabor) in Redwood Valley, Calif., enthusiastically agreed to serve as host of the program, which was initiated in 1987. Among the early activities were a trip to the Hayward, Calif., grave of Father Ahapius Honcharenko – the first Ukrainian priest in the United States and editor of The Alaska Herald – as well as visits to various Eastern Christian churches including Russian, Coptic, Armenian, Melkite, Maronite, all in the San Francisco Bay area.  Following the collapse of the USSR, students from Ukraine were also found studying at Mount Tabor.  Father Sviatoslav Shevchuk was among the clergy who attended Mount Tabor in the early years. He later became Ukrainian Catholic patriarch.

Having developed an expanded master plan for MASI, Father Chirovsky first sought the approval and support of Ukrainian bishops in the United States. The reaction seemed tepid.   The response of Ukrainian bishops of Canada, however, was different.  Led by Metropolitan Maxim Hermaniuk  – who admired the young Chicago priest and came to treat him like a son – the Ukrainian Canadian bishops listened attentively to Father Chirovsky’s presentation at a convocation in Edmonton, Alberta, and wholeheartedly accepted the establishment of MASI in Canada.   Father Chirovsky had met earlier with Father Joseph Andrijishyn, rector of Holy Spirit Ukrainian Catholic Interparchial Seminary at St. Paul University in Ottawa, where the possibility of locating MASI was discussed.

A mission statement was developed early on. It reads: “As a center of higher learning, research, ecumenical understanding and prayer, the institute is an academic unit of the Faculty of Theology at St. Paul University in Ottawa, offering accredited undergraduate and graduate degree programs in Eastern Christian Studies to both men and women – laity, religious and clergy.”

In 1989, the Ukrainian Catholic Congress of Canada passed a resolution designating the relocation of MASI to Ottawa as its official project for the centenary of Ukrainian settlement in Canada.  Thanks to the further support of the Oblate Fathers at St. Paul University, the Sheptytsky Institute began operations in the Oblate Seminary building in 1990 with a chapel, two offices and a reading room.

Financial support was essential, prompting Eugene Cherwich to establish the MASI Foundation in 1989.  The board of directors includes leading Ukrainian Canadians such as Paul Grod and Eugene Czolij, as well as such distinguished Ukrainian Americans as Roma Hayda and Dr. Andrew Browar. Since 1986, well over 1,000 benefactors have donated to MASI from all over the world, but mostly from Canada and the United States.  All are listed in the Jubilee Report.

Special recognition is offered in the report to the generosity of Peter and Doris Kule of Edmonton, who endowed the institute’s two academic chairs. Eugene and Lillian Cherwick of Winnipeg are also highlighted in the report for “their selfless work on behalf of the foundation.”

Inspiration for MASI’s ecumenical endeavors during the past 25 years has come from the life and achievements of its patron, the saintly Andrey Sheptytsky, who led the Ukrainian Greco-Catholic Church in Galician Ukraine from 1900 to 1944. During this period he visited Ukrainian communities in the United States, Canada and South America, and was instrumental in Rome’s appointment of the first Greek-Catholic bishops in the United States (1907) and Canada (1912).

A dynamic leader from a wealthy aristocratic family in Galicia, Sheptytsky used his wealth to fund a host of projects – from clinics to museums in Ukraine. He was an ecumenical thinker, a Ukrainian patriot and a man of peace. During the first world war, the Russians arrested the metropolitan soon after they occupied Ukraine for the first time. Released, he was placed under house arrest by the Poles. During the 1920s and 1930s he supported the Ukrainian Democratic Alliance (UNDO) in Ukraine and condemned both the Polish pacification campaign and the terrorist tactics of some Ukrainian nationalists. During World War II he condemned both the Nazis and Ukrainians who murdered innocents.

Metropolitan Sheptytsky was also a man of action who hid Jews from the Nazis in his private Lviv residence. In 1942, he wrote a letter to Gestapo leader Heinrich Himmler protesting Nazi treatment of Jews. As David Kahane wrote in his memoir, “Lvov Ghetto Dairy:” “No ecclesiatical figure of equal rank in the whole of Europe displayed such sorrow for the fate of the Jews and acted so boldly on their behalf.” A popular movement promoting Sheptytsky’s beatification emerged in the 1950s. In 1968, Pope Paul VI gave Sheptytsky the title “Servant of God.” The beatification process continues until today.

Metropolitan Sheptytsky provided the moral grounding and direction for the Ukrainian national identity during the 20th century. The triumphant trio is providing the same for the 21st century.