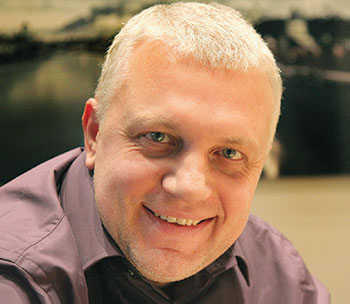 Pavel Sheremet in a photo posted on his Facebook page in November 2013.

KYIV – One year to the day after Pavel Sheremet was killed in a car-bomb blast in central Kyiv, dozens of reporters, civil society activists, friends and colleagues demanded to know who ordered the attack and why the investigation has stalled.

On July 20, after lighting candles at a makeshift memorial at the busy intersection where Sheremet was killed, a group of more than 200 people marched to the president’s office and other government buildings.

At each stop, the group demanded that authorities step up their commitment to investigating the case and release all information not already made public. They stood in a solemn column, displaying signs adorned with question marks.

At the headquarters of President Petro Poroshenko’s administration, the marchers were stopped by police about 100 meters from the front door but remained for several minutes as some activists spray-painted “Who killed Pavel?” on the pavement.

At the Internal Affairs Ministry and National Police office, police in riot gear guarded the building’s perimeter but allowed Ukrainian journalist-turned-lawmaker Mustafa Nayyem to affix a sign reading “Who killed Pavel?” to the doorway.

Moments later, Artem Shevchenko, chief communications officer for the Internal Afairs Ministry, addressed the crowd. He said that investigators had not given permission to reveal new information about the case.

“Everything that would not harm the investigation, the management of the National Police already published at a large press conference on February 8,” Mr. Shevchenko said.

He said “there is no clear suspect or suspects” in the killing, and urged journalists to share any new information they may have with the authorities.

But he defended the investigation, saying: “We recognize that there might have been some mistakes, but they were corrected.” 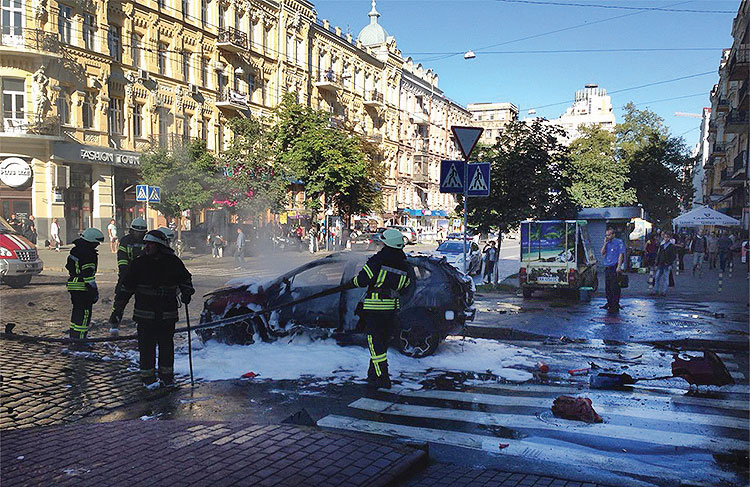 In this photograph taken by Olena Prytula before she realized her partner, Pavel Sheremet, was in the explosion on July 20, 2016, firefighters douse the vehicle in a Kyiv street.

Sheremet, a Belarusian-born Russian citizen who had made Kyiv his permanent home, was leaving the apartment he shared with his partner, Olena Prytula, and driving to the studio where he hosted a morning radio program when an improvised explosive device planted under the Subaru the couple shared exploded at 7:45 a.m. on July 20, 2016.

The attack brought swift condemnation and pledges by Ukrainian officials of a thorough investigation.

“It is a matter of honor to take all measures to solve this crime as soon as possible,” President Poroshenko said after the killing, which he called “a terrible tragedy.”

But one year on, the investigation has come up empty, and observers, including Ms. Prytula and Sheremet’s family members, accuse officials of incompetence, negligence, sabotage – or a combination of all three.

Tanya Cooper, Ukraine researcher at Human Rights Watch, tweeted: “1 year ago Pavel Sheremet was killed in car explosion in Kyiv but we still don’t know who did it #WhoKilledSheremet.”

In a statement posted on the U.S. Embassy website, ambassadors of the G-7 countries – the United States, Canada, Britain, France, Germany, Italy and Japan – stressed “the importance of continuing the investigation” into Sheremet’s death “and bringing those responsible to justice.”

“We continue to support media freedom in Ukraine and the important role of independent and free media,” the ambassadors said.

A Committee to Protect Journalists (CPJ) report authored by this RFE/RL correspondent and presented on July 12 in Kyiv was critical of the Ukrainian investigation, which thus far has produced no suspects and no arrests, has not clarified the motive of the killing, and has raised more questions than answers.

It found that no one figure has taken charge of the case since the October 2016 resignation of former national police chief Khatia Dekanoidze, who cited obstruction in her work as the cause for leaving.

In a July 11 meeting with CPJ representatives and members of Sheremet’s family, Mr. Poroshenko said he was “dissatisfied” with the investigation so far and proposed incorporating an internationally recognized investigator into the Ukrainian team investigating the killing in hopes of reinvigorating the probe.

RFE/RL asked U.S. Ambassador Marie Yovanovitch, who came to the place where Sheremet was killed to lay flowers and pay her respects, whether Mr. Poroshenko had followed up with U.S. law-enforcement agencies about his proposal. Ambassador Yovanovitch said she was unaware of any such request.

During its visit, the CPJ underscored Ukraine’s poor record of solving the killings of journalists. Seven Ukrainian journalists have been killed for their work since 1992, and in five of those cases no one has been convicted, according to the New York-based watchdog group.

Sheremet, who was honored by the CPJ with the International Press Freedom Award in 1998, was well-known as a hard-hitting reporter and commentator who had worked at prominent media outlets in Belarus, Russia and Ukraine during his decades-long career.

Often critical of political leaders, he had received threats and been harassed on several occasions. His Belarusian cameraman Dzmitry Zavadski was abducted and killed in 2000 after the two returned from a reporting trip in Russia’s Chechnya region.

Sheremet was stripped of his Belarusian citizenship in 2010 while he was living in Russia, where he had moved in 1997 to avoid persecution following his reports criticizing Belarusian President Alyaksandr Lukashenka’s government.

President Lukashenka started a two-day visit to Ukraine on July 20 and held talks with President Poroshenko on July 21.

Mr. Nayyem criticized Mr. Poroshenko for hosting Mr. Lukashenka on the anniversary of Sheremet’s death, calling it “absurd” in a Facebook post that was followed by numerous comments expressing similar contempt
(https://www.facebook.com/Mustafanayyem?fref=ts).

“The same Lukashenka who destroyed freedom of speech in his country, under whom hundreds of journalists have disappeared or been jailed and the rest, like Sheremet, have had to emigrate,” Mr. Nayyem wrote. “The very same Lukashenka under whom Pavel was sent to pretrial detention and his friend and cameraman… was brutally murdered.”

Dozens of relatives, friends and colleagues came to Sheremet’s grave in Minsk on July 20, placing flowers and lighting candles in his memory. Zavadski’s widow, Svyatlana Zavadskaya, was among them.

A former chairwoman of Belarusian Journalists’ Association, Zhanna Litvina, said at the graveside gathering that there is no transparency in the investigation of Sheremet’s death.

“Since the information regarding the investigation is given in restricted form, it is time to demand an international investigation of the case,” Ms. Litvina said.

Sheremet and Ms. Prytula, co-founder and owner of independent news site Ukrayinska Pravda, had reported being under surveillance in Kyiv in the months leading up to his murder. Ukrainian authorities have denied being behind the surveillance and said they do not know who had been watching the pair. They could not clarify whether they were looking into the surveillance as part of the murder investigation.

The brazen killing of Sheremet, 44, came amid a spate of attacks and hostility against journalists who covered the government critically or questioned its handling of the conflict with Russia-backed separatist forces in eastern Ukraine.

In a Facebook post ahead of the July 20 commemoration, journalist Yekaterina Sergatskova described the chilling effect the killing of her friend and colleague Sheremet has had on journalists in Ukraine.

“This whole year I’ve felt cornered, as if the murder was a loud message to me and my colleagues that the same could happen to anyone who investigates corruption, criticizes the authorities, publicly denounces criminals, or just knows too much. A year ago, together with Pasha [Pavel’s nickname], independent journalists were blown up.”

With reporting by RFE/RL’s Ukrainian and Belarus Services.