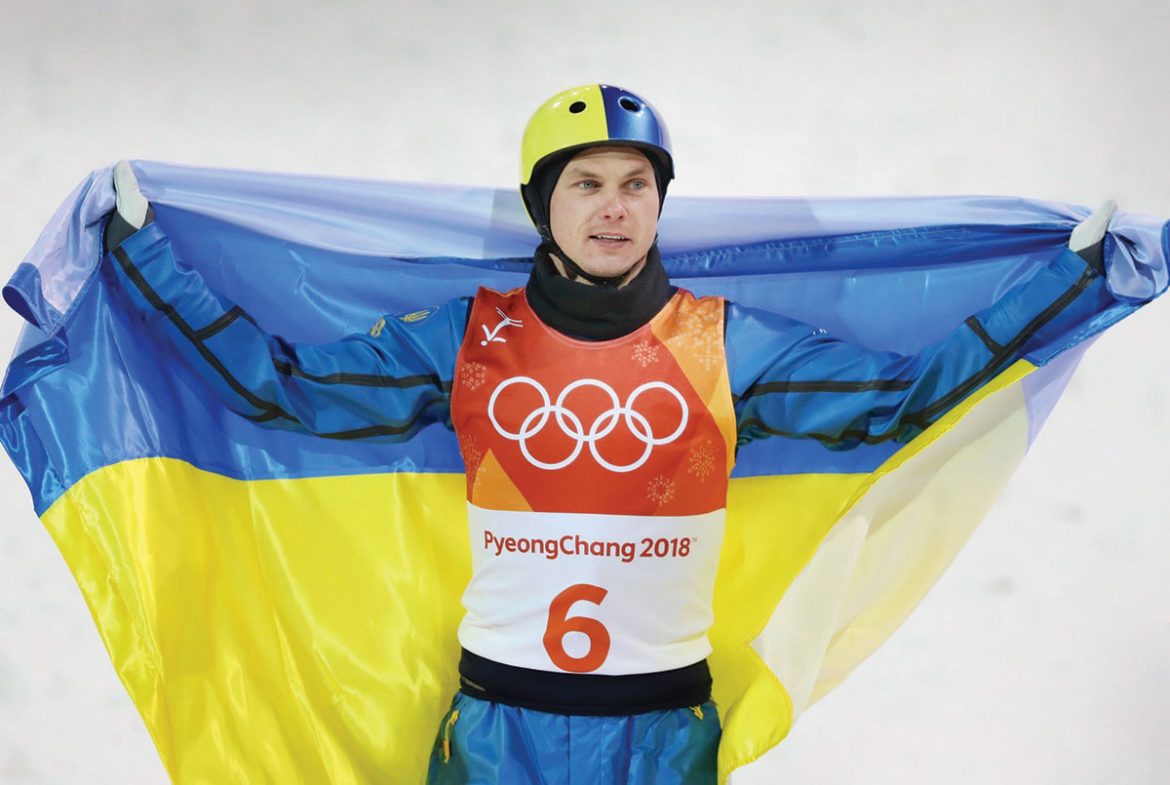 Oleksandr Abramenko made history on February 18, becoming the first man to win an individual Winter Olympic medal for Ukraine in a very tight aerials final competition. Both Abramenko and China’s Jia Zongyang attempted the same jump in the last round, a back full, double full. Both executed the jump perfectly and both believed they had won.

The 29-year-old Ukrainian celebrated prematurely, turning a Ukrainian flag into a cape and racing around when his final score of 128.51 was posted. His score remained tops after Canada’s Olivier Rochon and Belarus’s Stanislau Hladchenko both washed out in their last attempts, leaving only Jia.

The last competitor to jump, Jia nailed his attempt and turned to the landing hill with arms raised triumphantly.

Abramenko apparently agreed, moving over to the silver-medal position, awaiting Jia’s score. He then had to move back over, as Jia’s score of 128.05 was barely short of gold and Abramenko could celebrate a phenomenal achievement.

“I still can’t believe that I actually won a gold medal,” Abramenko conceded in a post-race press conference. “I was hoping for any medal really.”

The only other gold medals won by Ukraine at the Winter Olympics came in 1994 when Oksana Baiul won in figure skating, and in 2014, when the women’s biathlon team won in the relay event. The country is much stronger in the Summer Games, winning 11 medals in Rio in 2016.

Success in the Winter Games has been much more challenging, making Abramenko’s accomplishment all the more remarkable. Perhaps his aerial skills were underrated, as his climb to the podium included 27th place in Torino (2006), 24th in Vancouver (2010) and sixth in Sochi (2014).

As a youngster growing up in Ukraine, Abramenko was pushed by his father into team sports, especially soccer. The son didn’t have a feel for the sport, preferring more extreme competitions. Good call by him.

Abramenko said he tried his winning jump only 15 times, adding: “This was one of the best jumps of my life.”

The final consisted of three rounds, with the three lowest-scoring athletes being eliminated at each stage. Once the field was reduced to the final six, the tension was palpable as each athlete took his final jump. The highest score from the final round won the gold medal: Abramenko’s 128.51 points.

For a brief moment, Ukraine owned a track record in PyeongChang, if only because it was the first country to compete in the luge team relay. In a matter of minutes it was gone. Welcome to luge, where one sled follows another in 30-second intervals.

A few countries won medals, more countries vied for medals. Then there was Ukraine, which did not fare well in luge, finishing last in every event.

One of Ukraine’s sliders, Andriy Mandziy, finished last in men’s singles, falling off his sled halfway through one run before somehow regaining his stride to actually reach the finish line. (See more below)

Another slider from Team Ukraine, Olena Stetskiv, finished in last place in women’s singles, more than eight seconds off the gold-medal pace.

The duo of Oleksandr Obolonchyk and Roman Zakharkiv finished 20th out of 20 countries in men’s doubles, four seconds out of first place. The time gap between Ukraine and second-to-last Romania was greater than the spread between Romania and 11th place Russia.

The final race of luge at these Olympic Games ended in the same manner: Ukraine finished in last place in the mixed team relay competition, with the entire three-sled group finding ways to ricochet off walls and curves in finishing in 2:31.03 seconds, just over six seconds behind first-place Germany.

“No, I am not happy. I crash and it’s my problem in track, in training. Now here problem, too,” said Olena Shkhumova, who led off the team relay. “I am unhappy. I am good in my competition. Now team, not good,” she said at the post-event press conference.

Most members of Ukraine’s luge contingent have been sliding for some 10 years. Success on the international stage has proved elusive. There is still a silver lining to take from these Games, said 22-year-old Anton Dukach, who rode one leg of the team relay. “I think this, my first Olympics, is one of my biggest experiences I’ve had,” Dukach said. “Next Olympics, I will be more fast with more fast sleds, with big experience to compete for the medals. We will compete for good result,” he told the press.

The luge team’s results notwithstanding, the athletes’ comments are quite relevant in assessing the team’s performance and looking to the future. Along with Shkhumova’s implied disappointment, frustration and embarrassment, there are also Dukach’s sentiments of hope, confidence and the conviction to improve in ensuing competitions. His words espouse the true competitive Olympic spirit. The relatively young luge squad (average age: 25 years) must still grapple with learning how to juggle the pressures, logistics and intangibles inherent to their sport while battling the world’s best athletes. No doubt a returning Olympian will be better prepared mentally and physically, eager to atone for a poor prior performance.

There is an adage in sports that says a new/young team must learn to lose before it can expect to win. The Ukrainian luge team had the ultimate lesson in losing in PyeongChang. Are they ready to win four years from now? An affirmative reply to this question will depend on the composition of the next Olympic luge team, the hard work team members put in over the next four years and the depth of financial support the National Olympic Committee of Ukraine (via Ukraine’s government) invests in them. Odds are excellent there will be changes on the team, especially with the men. Mandziy (29) and Obolonchyk (26) have competed in two Olympiads, while Zakharkiv (27) is a three-time Olympian. While the women are younger, Shkhumova (24) and Stetskiv (23) are both veterans of two Olympics. The extremely poor results may trigger an overhaul of the luge team.

In the first run of men’s singles competition, Mandziy sat last among the 40 competing lugers, but his finish showed flash and dash, impressing the gathered crowds.

He was 15 seconds into his first run when his sled spun out, sending him into what seemed initially like a disastrous tailspin. Then, like a magnet, his sled rose off the top of a curve – while Mandziy drifted downward on his right side, his back and finally his stomach, a victim of circumstance and gravity – only to somehow draw back into his left hand.

Mandziy grabbed his sled, rotated back into position and slammed his hands on the track in frustration. He proceeded to get back onto his sled – not just a major achievement, but most critical for another reason – lugers are disqualified if they don’t complete the race. The Ukrainian at least crossed the finish line.

That he did so in 1:02.395 seconds – almost 11 seconds out of second-to-last and a whopping 15 seconds out of first – matters only to a point: Mandziy fell, slid on his backside and then saved his day. Not all last-place finishes are the same.

He will be remembered much more for his gritty, remarkable recovery than for his last-place showing.