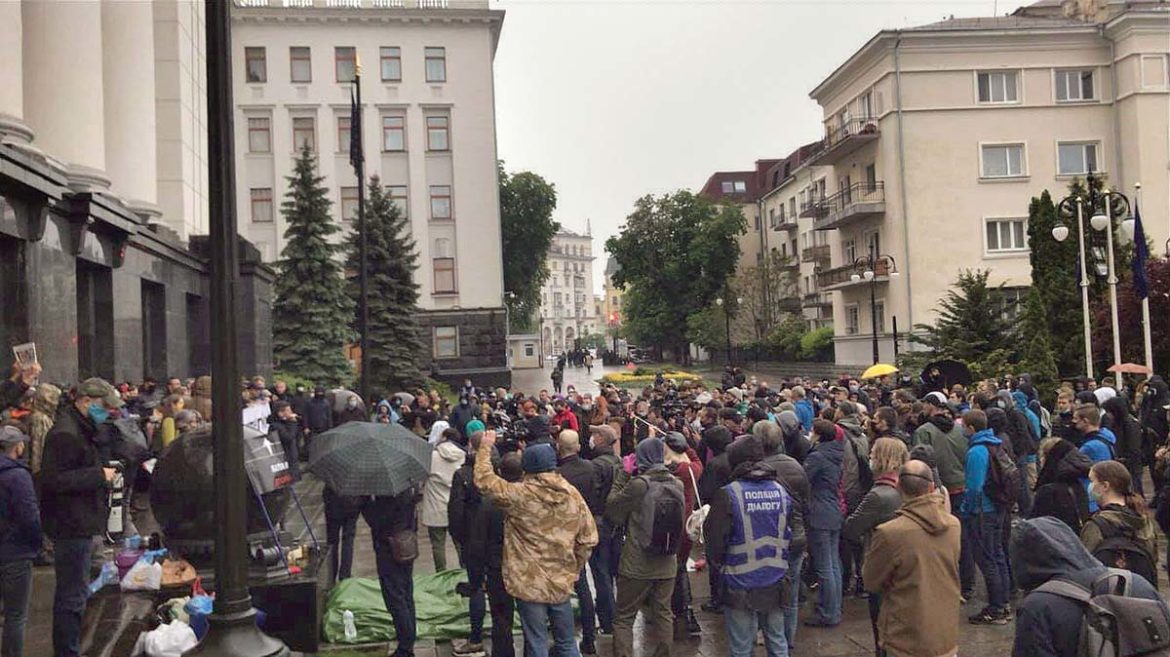 Protesters gathered by the Presidential Office on May 25 demand justice for suspects detained in the Pavlo Sheremet murder case.

KYIV – On July 20, 2016, Belarusian-born Ukrainian journalist Pavlo Sheremet was driving to work when his car exploded. There were reports that the explosion was caused by a car bomb, and former Prose­cutor General Yuriy Lutsenko described it as murder. Among the versions voiced almost immediately was that Russian intelligence services were involved. The determination of who was behind the assassination was declared a priority by Prosecutor General Yuriy Lutsenko, President Petro Poroshenko and Internal Affairs Minister Arsen Avakov.

Nearly four years later, the murder case has yet to be solved.

Sheremet lived his last years in Kyiv, where he worked for the online news outlet Ukrayinska Pravda and hosted a radio program. The New York Times described him as “known for his crusading reports about political abuses in Belarus” and “a thorn in the side of [President Alyaksandr] Lukashenka’s autocratic government.”

On December 12, 2019, President Volodymyr Zelenskyy and Mr. Avakov, who remains the internal affairs minister, took part in a National Police briefing on the Sheremet case. The police announced at that briefing that they had detained musician and veteran Andriy Antonenko, military medic Yana Duhar and cardiac surgeon Yulia Kuzmenko as murder suspects.

Representatives of the police reported that they had made more than 800 seizures of information during the investigation, interrogated more than 3,700 people, processed 80 million telephone connections and information on 44,000 phone users, and reviewed recordings from 221 video cameras. According to the investigation, Ms. Duhar photographed the cameras on the eve of the murder, while Dr. Kuzmenko planted an explosive under the car together with Mr. Antonenko.

The court decided to detain Dr. Kuzmenko and Mr. Antonenko until the trial ends. Ms. Duhar was placed under house arrest. However, both the news media and the suspects’ lawyers found numerous inconsistencies in the investigators’ report, including a difference between the height of the suspects and the people who were recorded on video at the scene of the crime.

Mr. Antonenko’s defense claims he is taller than the killer. Ms. Duhar’s lawyers insist she has an alibi confirmed by documents and witnesses, and that the examination on which suspicion is based is incomplete and biased. Dr. Kuzmenko also criticized the investigation as being flawed. According to the defense, at the time of Sheremet’s murder, Ms. Duhar was not acquainted with the other suspects; Dr. Kuzmenko and Mr. Antonenko had communicated with each other only a few times.

On May 25, the court decided to extend the detention of Mr. Antonenko and Dr. Kuzmenko, as well as the house arrest of Ms. Duhar. Veterans and civil society activists gathered that day in front of the Presidential Office to demand justice for the three after almost a half a year of pre-trial detention and house arrest.

According to the protesters, President Volodymyr Zelenskyy is politically responsible for the investigation into the Sheremet murder after he joined a briefing by the Ministry of Internal Affairs in December 2019 at which the announcement of suspects was made. The president’s presence at the briefing, they say, was a form of support for Minister Avakov’s actions.

“The game called ‘Sheremet’s Case’ has lasted 164 days,” protest organizers wrote on Facebook. “Highly qualified cardiac surgeon and volunteer Yulia Kuzmenko, well-known musician and veteran Andriy Antonenko, and military nurse Yana Duhar are the hostages of this game. For five and a half months, the whole of Ukraine has been watching political ‘football.’ The responsibility for the case is passed among the Ministry of Internal Affairs, the Prosecutor General’s Office and the president like hot potatoes,” stated the movements Free Riff (a reference to Mr. Antonenko’s pseudonym) and Free Dr. Kuzmenko – the main organizers of the protest.

“We do not like ‘football’ that cripples the lives of innocents. Therefore, we invite everyone tired of this game, and those who want justice and legality in the case to come and address the president,” wrote organizers in announcing the rally in front of the Presidential Office.

According to activists, the case is being dragged out and unjustly imprisoned people are currently behind bars. The Movement of Veterans of Ukraine and more than 15 veterans’ and volunteers’ organizations are participating in the campaign for justice. Thus, the flags of armed forces and volunteer movements were in evidence at the protest on May 25. Meanwhile, flags of political forces were banned.

Even though quarantine restrictions were being eased and the Kyiv metro had started working that day, organizers asked protest participants to take precautions for their safety and that of others. Participants wore face masks or respirators and kept a safe distance of 1.5 meters.

On the evening of the protest, the Pechersk District Court of Kyiv granted the prosecutors’ request to extend the pre-trial detention of Dr. Kuzmenko and keep her in custody for another 60 days. The same court ordered that, instead of being under house arrest, Ms. Duhar should pay bail of 168,000 hrv. (Ms. Duhar’s friends and public supporters later collected the required funds.) Also on May 25, the court extended the detention of Mr. Antonenko until July 23.

“I assess your actions as intentional against a knowingly innocent person,” Mr. Antonenko told prosecutors who filed the motion for his continued detention. He provided evidence of his innocence, including the fact that his height and that of the two other suspects does not match the height of the people captured on closed-circuit TV cameras.

Earlier, investigators had believed that Mr. Antonenko organized the assassination, “fascinated by ultranationalist views, cultivating the greatness of the Aryan race, the division of society on the principle of nationality, seeking to make such views the object of public attention, carrying out actions to draw public attention to certain political beliefs.” The police now believe that unidentified organizers acted for personal reasons and “decided to create an extremely resonant event in society” in order to provoke protests.

Mr. Antonenko is now suspected of being the executor of the crime, while Dr. Kuzmenko and Ms. Duhar are named as his accomplices.

“Sounds as absurd as the previous text,” is how Dr. Kuzmenko’s lawyer, Taras Bezpalyy summed up the new version of the motives behind the murder. Now, in addition to “group premeditated murder committed in a life-threatening manner for many people,” all three are also suspected of “illegal group storage of explosives” and “deliberate group destruction of property by an explosion.”

“On the day of Zelenskyy’s press conference [May 20], the deputy prosecutor general changed the entire group of prosecutors. The next day, the group decided to alter the charges and it completed the pre-trial investigation a day later. I can’t call it anything but a farce,” Mr. Bezpalyy commented.

The investigation into the Sheremet murder was one of the most pressing issues raised by journalists at the Ukrainian president’s press conference on May 20.

“I am ready to take responsibility if the investigation was wrong, if there were big mistakes, if, God forbid, something special was directed against these people. I am ready to make serious personnel conclusions where I have influence,” said Mr. Zelenskyy. “And what do you want from me, what responsibility? Let me become the prosecutor general, the minister of internal affairs, and I will bear full responsibility in accordance with my powers,” the president declared.

Right now it is up to the Prosecutor General’s Office to determine if there is sufficient evidence to take the Sheremet case to court.