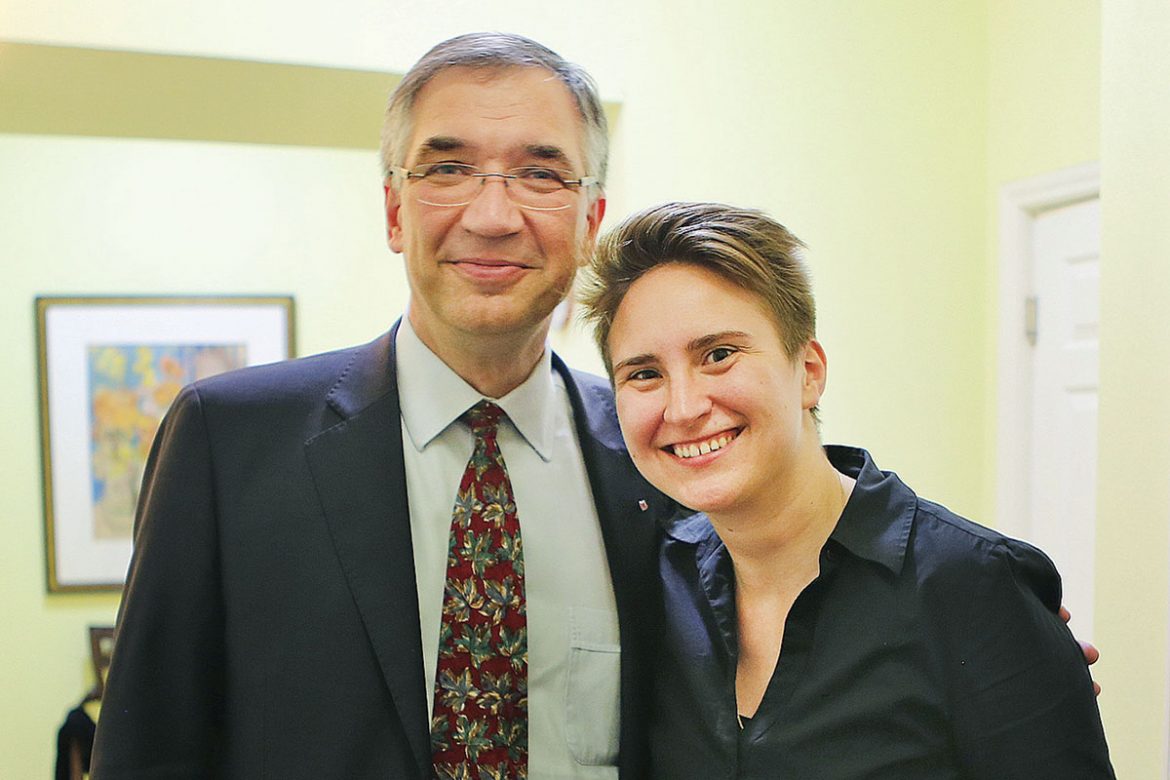 Canadian Ambassador to Ukraine Roman Waschuk with film director Adriana Luhovy during the filming of “Recovery Room,” in Kyiv.

Montreal – Adriana Luhovy is currently working on a feature documentary film, tentatively titled “Recovery Room,” for which she is director and cameraperson.

The documentary deals with the current war in eastern Ukraine and the diaspora’s response on a humanitarian level. It is based on interviews and unique archival footage, contributing to a better understanding of the war, its effect on the young men and women fighting, and why/how Ukrainians across Canada are providing humanitarian assistance. It follows the journey of the patients and medical teams, both Canadian and Ukrainian, over the course of two medical missions, and it captures the close interaction between them.

The documentary exposes the human stories of many of the Ukrainian patients, conveying what they have gone through before, during and after their significant psychological and physical trauma, put in context of the war.

Filming of the documentary first began when Ms. Luhovy was invited by the Canada Ukraine Foundation to join the team of the Canadian Medical Mission to Ukraine in May 2015 as photographer of the mission. During this time, she noticed that news channels would come and go but not capture the real depth of all that was occurring. She began to film and interview, as well as continue to photograph.

“It was important to document the work of the doctors and patients, record the stories and emotions, ensuring this was not forgotten,” she explained. “The war, its destruction and its impact on society is told. I believe the film will propel discussions on topics of human rights, freedom, justice, independence, sacrifice and Ukrainian history.” The documentary is being produced and edited by Yurij Luhovy.

Ms. Luhovy further noted: “I was privileged to be in the Kyiv Main Military Clinical Hospital operating rooms every day for two medical missions, close to everything that happened. The injured soldiers were from all over Ukraine – from Lviv to Luhansk. Some were still recovering from injuries on the Maidan during the revolution. I was also granted special permission to stay and continue my work conducting interviews and filming at the Kyiv Main Military Hospital even after the Canadian medical team returned to Canada, having gained complete trust of the soldiers and medical teams. These unique interviews form the story.”

She expressed her gratitude to Victor Hetmanczuk, Krystina Waler, Dr. Oleh Antonyshyn, Dr. Ihor Fedirko and many more “for the opportunity to be with them.”

In February, Ms. Luhovy visited the soldiers and staff during the fourth medical mission in Kyiv as a follow-up, receiving additional materials for the documentary.

Ms. Luhovy created a website to support 11-year-old Mykola Nyzhnykovskyi, the victim of a horrific undetonated-grenade explosion, who is currently being treated at Montreal’s Shriner’s Hospital.

She also designed the Canada Ukraine Foundation’s medical mission logo, branding materials and certificates, as well as the Help Us Help The Children website.

Prior to joining CUF’s medical mission, Ms. Luhovy was Ukrainian program coordinator in New York City for Advancing Human Rights, working on high-profile human rights abuse cases, including the plight of Nadiya Savchenko. She is a graduate of Montreal’s Concordia University in communications studies; of Vancouver Film School in digital design; and of New York School of Visual Arts in design for social change. She attended the University of Kyiv-Mohyla Academy summer school and the Ukrainian Catholic University in Lviv. Her work on historical documentaries began as the main camera operator for the award-winning feature documentary “Genocide Revealed.”

For over 10 months, the filming of “Recovery Room” had no financial support, but Adriana continued. Readers may view trailer for the film at: https://www.youtube.com/watch?v=OcjAsbhoTl8.

For further information or to help support the project, see www.adrianaluhovy.com or call 514-481-5871.