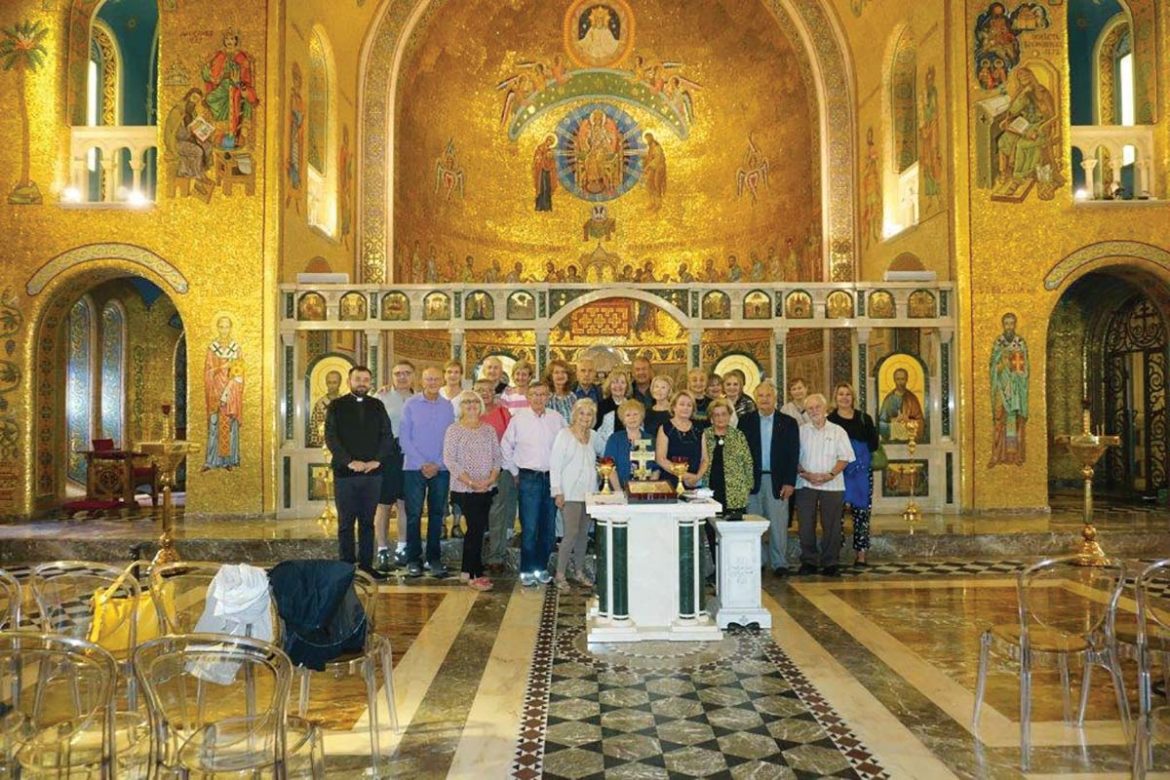 During a guided tour of St. Sophia Ukrainian Catholic Church and Museum in Rome.

As loyal readers of The Ukrainian Weekly know, each year for over two decades, we have produced the special supplement called “A Ukrainian Summer.” This popular feature of our newspaper usually includes travel stories from Ukraine and beyond. This year’s supplement, which was scrubbed due to the worldwide coronavirus pandemic, would have included the travel story below. We publish it here for our readers’ enjoyment. (Let’s all hope for a better summer next year.)

The departure gate at Newark Airport for the flight to Rome was teeming with friends and acquaintances greeting each other with exclamations of welcome as this group of travelers gathered for the first leg of the 12-day “Adriatic Dream Cruise,” organized by Zenia Brozyna of Zenia’s Travel Club. We were the contingent that chose to arrive in Rome on September 24, 2019, for three days of extra sightseeing in Rome before we joined the rest of the 64 tour members to begin our cruise.

The cruise encompassed an exciting program of shore visits to several cities along the eastern Adriatic coast, followed by stops in Greece, Malta and Italy. Our vessel was Holland America’s the MS Koningsdam, a relatively new cruise ship that was launched only three years before. The members of our group came from different regions of United States, including Michigan, Florida, Texas and the eastern states, as well as folks from Ontario; most had the common tie of being of Ukrainian descent. 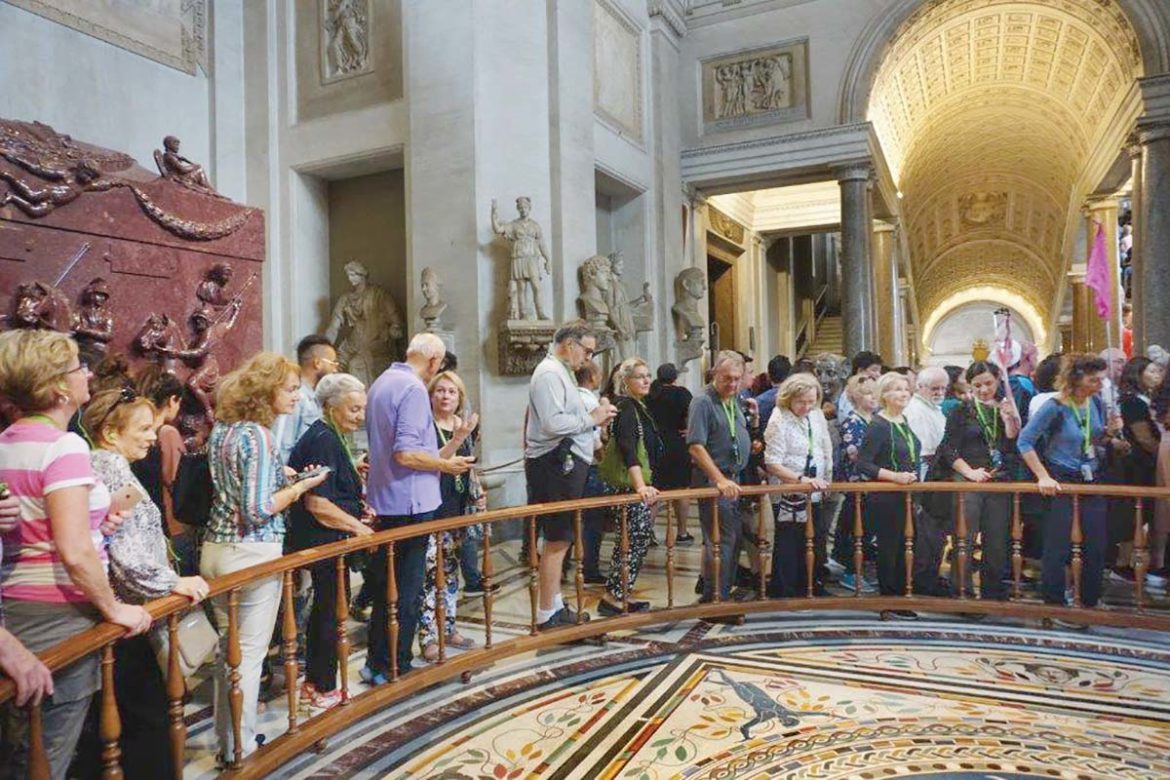 Sightseeing at the Vatican Museum.

Our home base in Rome was the centrallylocated Hotel Massimo, which was the starting point for the Rome-based private tours organized by Ms. Brozyna. The first of these was an all-day tour that started at the Papal Palace and Gardens of Castel Gandolfo, which overlooked a mountain lake and was the summer home of popes. The group lunched in the stunning gardens, followed by a guided tour of the Papal Palace. Many popes had kept their favorite souvenirs at this palace, and the viewers were touched to see a Ukrainian woodcarved box, or “rizblena kasetka,” among these artifacts. A visit to the Frascati vineyards with a wine tasting concluded a perfect Italian experience. All of this just a half-hour drive from Rome.

The second Rome tour was to the Ukrainian Catholic Basilica Santa Sofia (St. Sophia), built by Patriarch Josyf Slipyj, which served as the mother church for Ukrainian Catholics while Ukraine was under Soviet domination. In a private tour of the basilica’s interior, our visitors saw stunning gold mosaics that totally covered the walls and ceilings. The day concluded with a walking tour of the Vatican, the Sistine Chapel and St. Peter’s Basilica – always breathtaking. 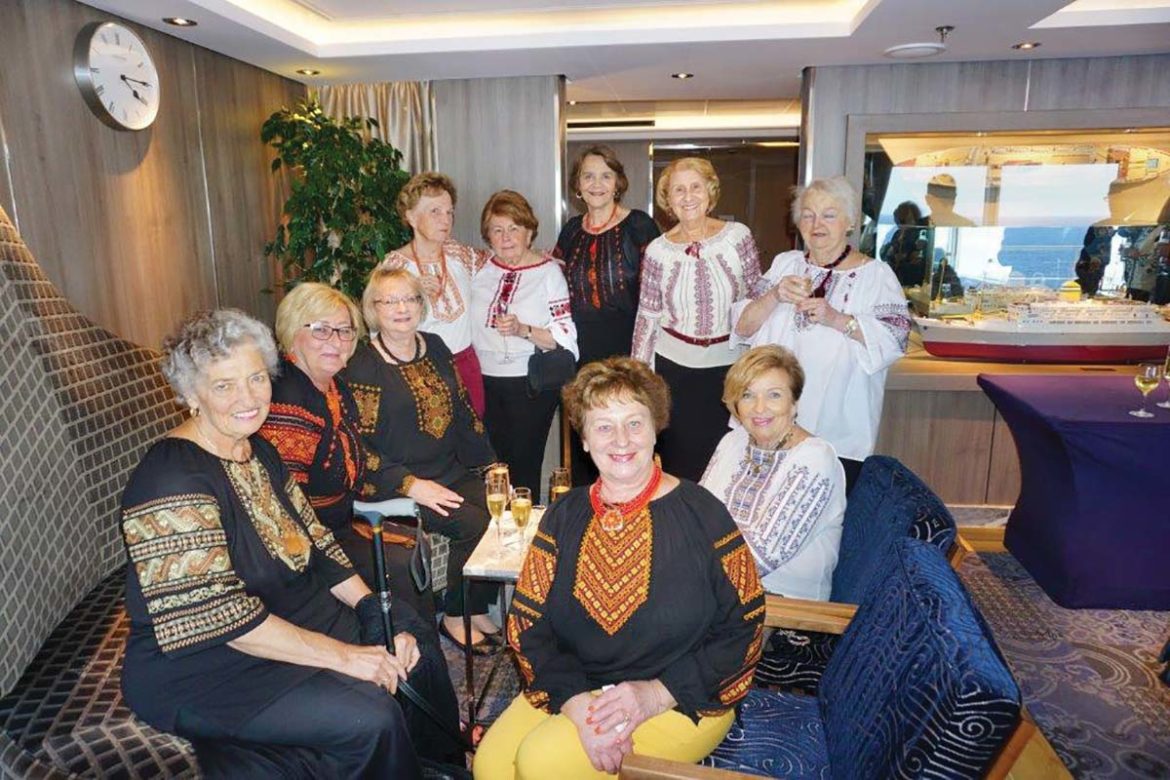 Vyshyvanka Night – a visual attraction for all cruisers on the ship.

Once we arrived at Civitavecchia, the port for Rome, we were all very excited to start our cruise and explore our home for the next 12 day. The MS Koningsdam was modern and spacious, with many athletic courts, two pools, a large theater, several nightclubs and many bars. It was good to know about all the amenities, even though we were going to be busy in ports for nine of the 12 cruise days.

Our first full day on board was “at sea” and included two events unique to Zenia Travel’s cruises that appealed to our Ukrainian heritage and fostered a friendly camaraderie among the Zenia travelers. 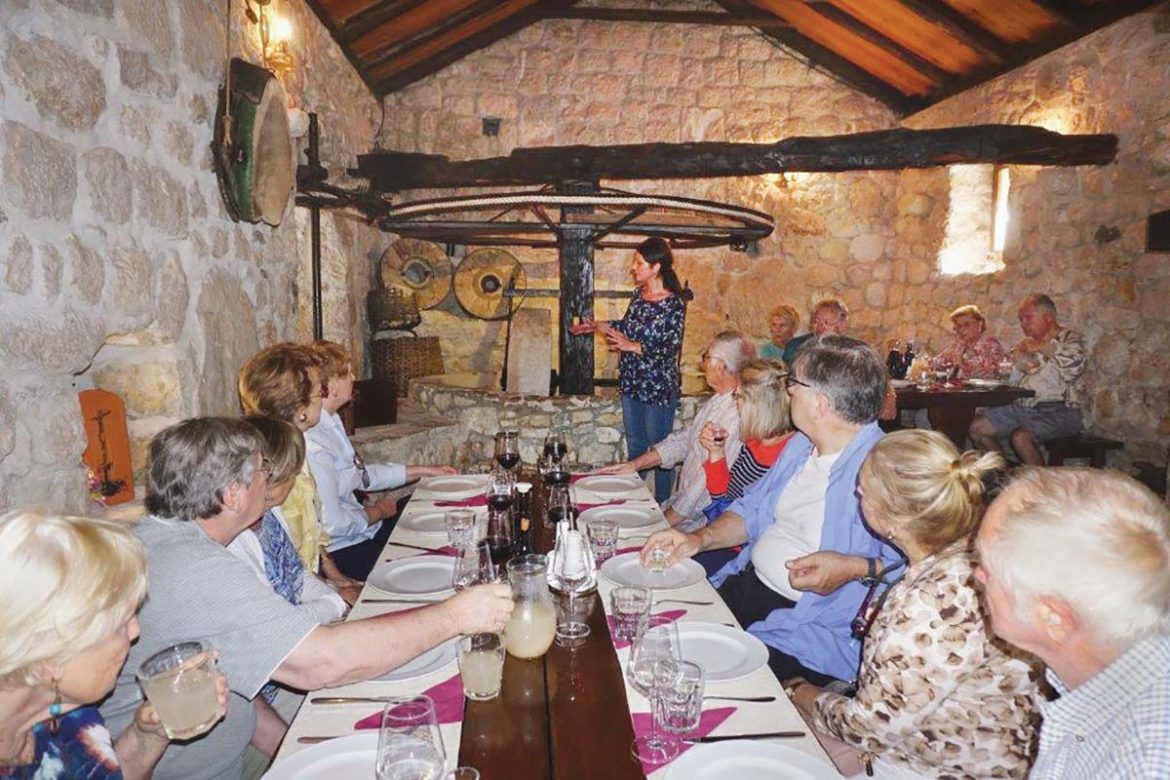 Off the beaten path at a family-run, 300-year-old renovated olive oil mill in the Konavle Valley of Croatia.

That morning, Judge Bohdan Futey of Virginia held a discussion group that focused on the political events that were developing in Washington regarding the start of the impeachment hearings and the dissolution of the Parliament in Ukraine.

In the evening, Ms. Brozyna hosted a “Vyshyvanka Night” cocktail hour with complimentary drinks and hors d’oeuvres, and everyone had an opportunity to get acquainted with even more members of the group as we sang “Mnohaya Lita” to those with September and October birthdays. 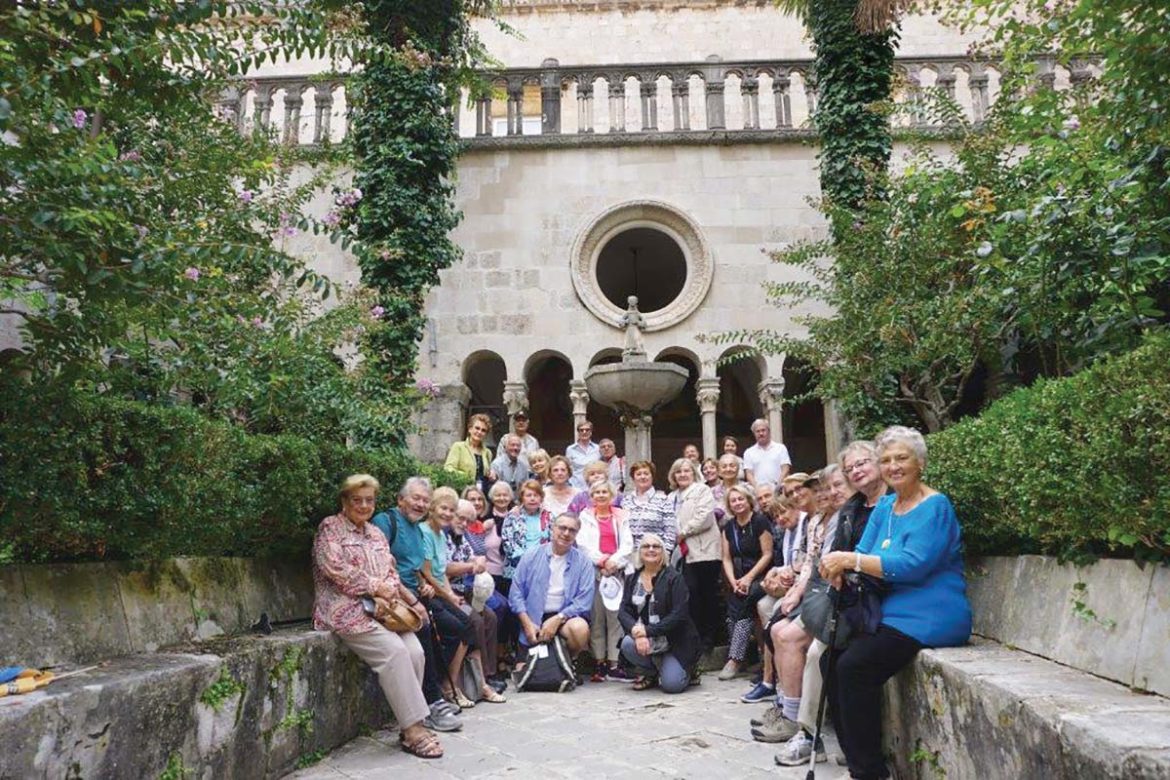 A visit to the Franciscan Church, Library, Pharmacy and Monastery in Old Town Dubrovnik, Croatia.

Over the next five days, we had many outstanding experiences as we visited five cities along the Eastern Adriatic coast: Dubrovnik, Split and Korcula in Croatia; Kotor in Montenegro; and Koper in Slovenia. Outside Dubrovnik we had a delicious lunch at an olive farm high in the mountains with spectacular views. Dubrovnik looked very much like the Game of Thrones setting that it was. The Postojna Caves in Koper were enormous, and at one point we were almost 100 meters below sea level.

Most of the cities had similar architectural styles, with ancient walls and towers that surrounded the old cities, amazingly still intact. Each city had historic sites to visit and churches that ranged from austere to grand. We found many excellent restaurants, and since these were all ports, there was access to beaches and activities in the pristine waters. 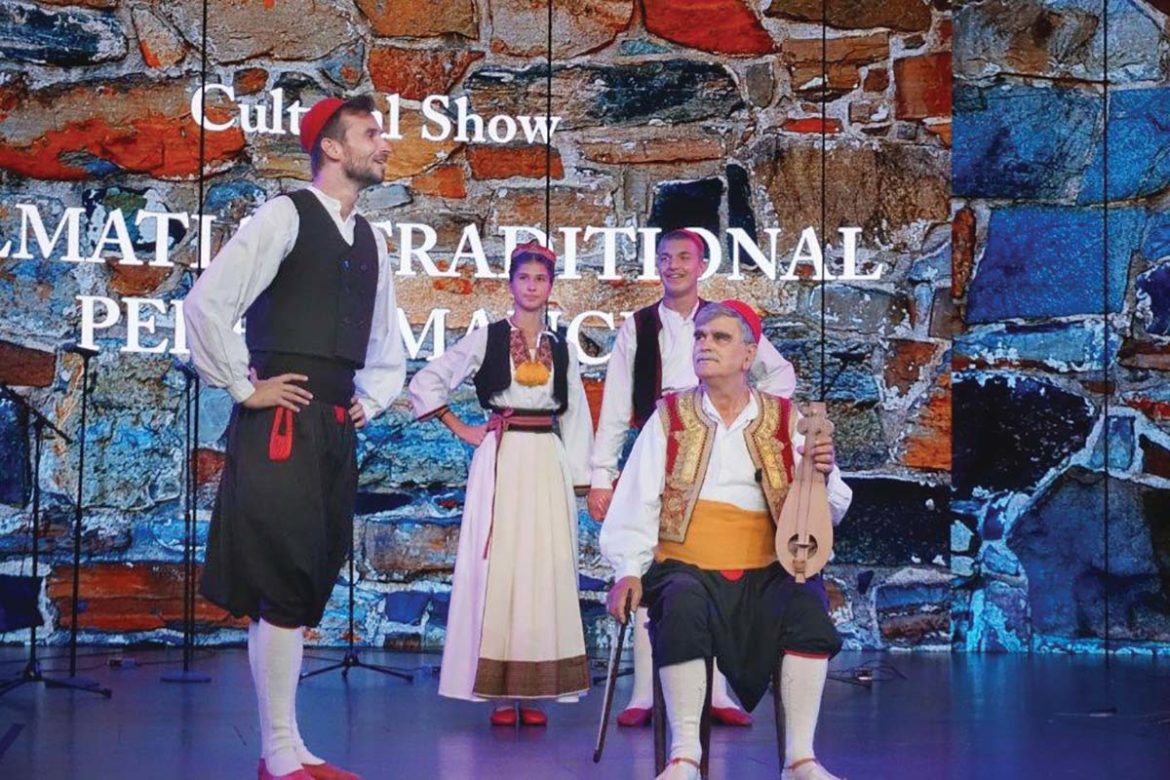 The atmosphere became a little “heated” as we sailed towards Catania, Sicily, because we saw Mount Etna send out puffs of smoke. Dinner that night was effectively disrupted as voyagers gaped at the geologic show on the port side. When we subsequently arrived in Catania, Sicily, our excursion bus took us up painfully steep roads to Taormina, high in the mountains with extraordinary views of the Sicilian coastline.

The island of Malta and its towns of Valletta and Mdina stood out in contrast to our previous stops. Our tour guide emphasized that Malta was a highly strategic location during World War II, situated between Europe and Africa, and consequently was the most intensively bombed area of the war, more so than England. The tour of medieval Mdina was steeped in the history and culture of the Knights of Malta. The Church of St. John the Baptist was one of the most magnificent of our whole cruise, overshadowing the churches we had seen until then with its mosaics and paintings. The enormous Caravaggio painting, “The Beheading of St. John the Divine,” was truly awe-inspiring. 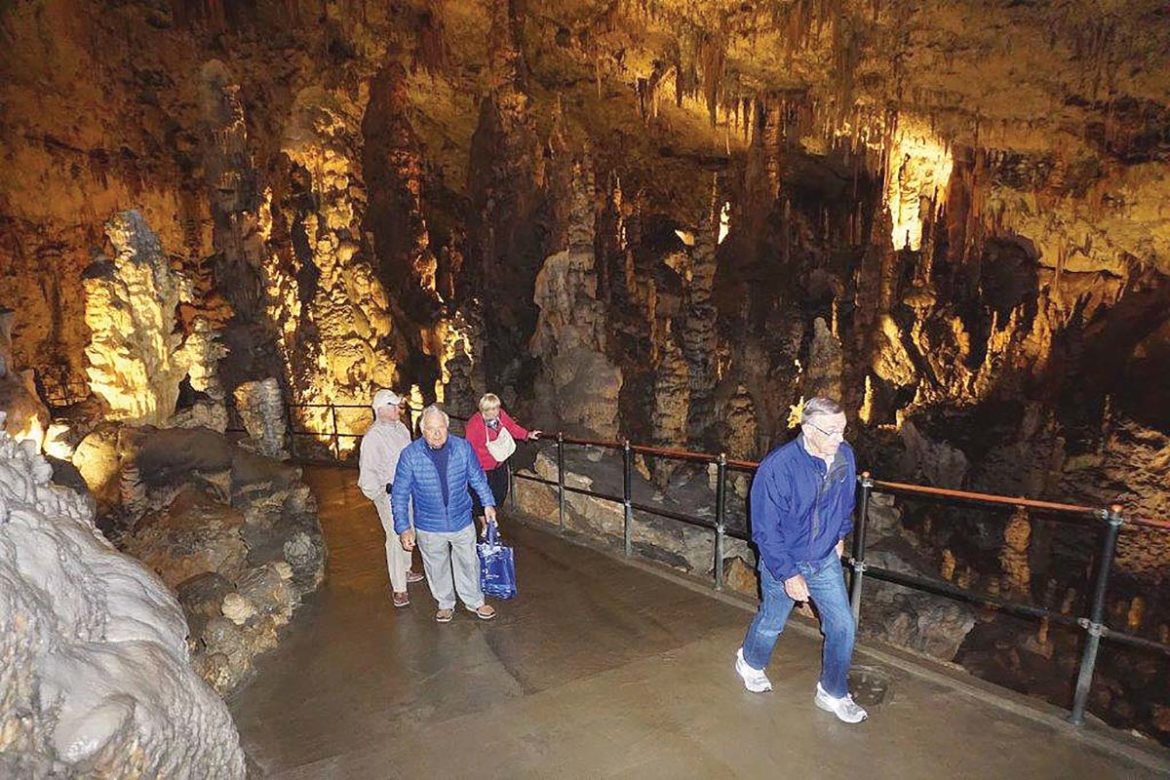 Exploring the stalactite and stalagmite covered galleries of the caves in Koper, Slovenia.

We had one more day at sea, with a full schedule of on-board activities. Again, members of Zenia’s Travel Club had the opportunity to meet with Judge Futey, who updated the group on current events that were unfolding in the United States and Ukraine. Members of our group played cards together, swam in the pools or joined in a virtual tour of the bridge. In the evening, we were treated again to a Farewell Cocktail Party in the upper-most deck lounge, hosted by Ms. Brozyna. During the short time of the cruise, the voyagers in Zenia’s Travel Club had made many friendships.

In appreciation for all the efforts Ms. Brozyna had made towards making the cruise a success for its participants, the group gave a gift of a large photo of Ms. Brozyna on board the ship signed by Zenia’s Travel Club voyagers. 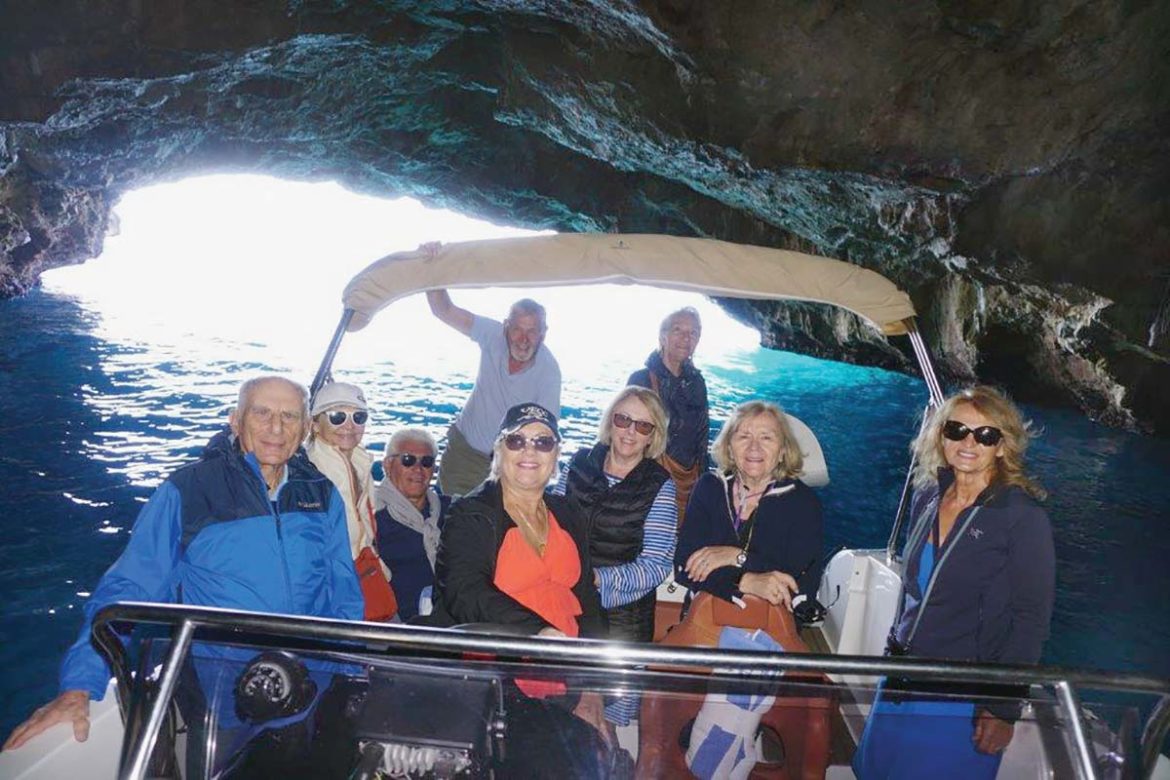 During a thrilling boat trip to the Blue Grotto in Kotor, Montenegro.

During the final gala dinner that night, there was general excitement on board the ship from which it was possible to see the volcano on the island of Stromboli start to erupt – first just with smoke and then fireballs. We were in awe to see the eruption from start to maximum intensity as the ship slowly cruised by.

Our last stop before returning to Rome was in Naples. The majority of Zenia’s travelers took a boat ride to the island of Capri to enjoy its lovely beaches and shops. Several others toured the ruins of Pompeii for an unforgettable view into Roman lives of 2,000 years ago, captured forever in the freeze shot created by the ashes of Mount Vesuvius. You couldn’t help feeling an eerie intimacy with these Pompeiians as we observed their sophisticated artistry, engineering and lifestyle that did not seem so different from our contemporary living. 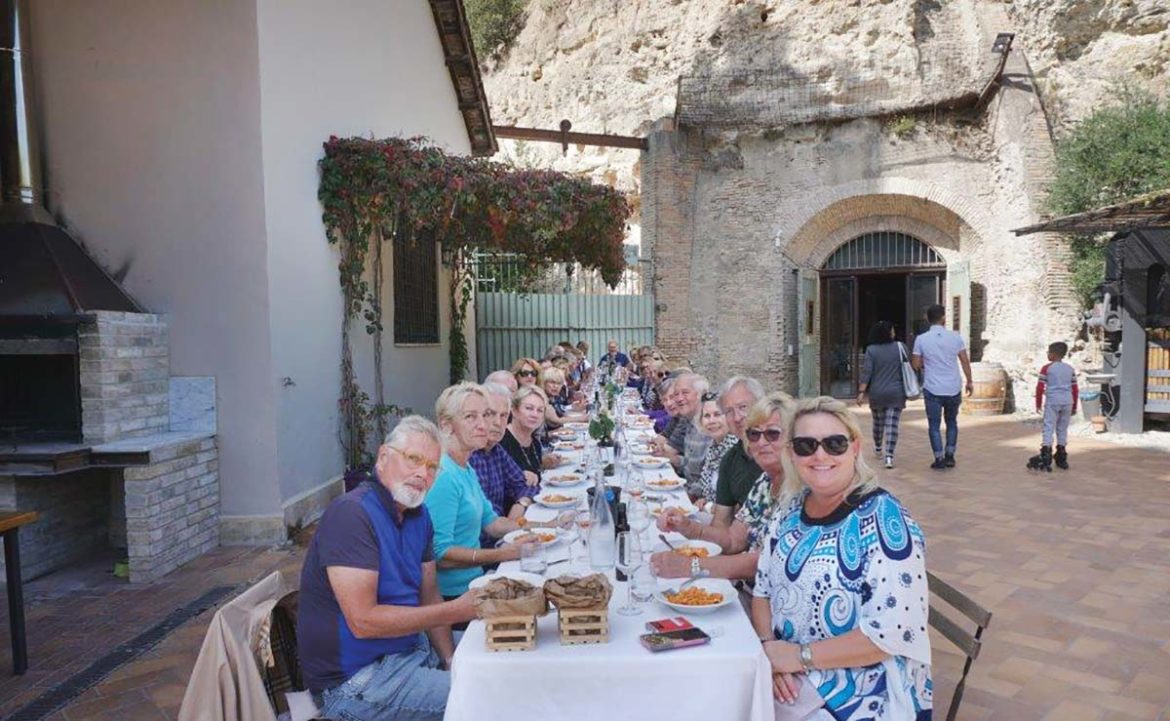 The last group luncheon after a day of wine tasting and exploring the historic Castle di Torre in Tuscany, Italy.

Our cruise ended the following day back in Civitavecchia, and our ocean liner had provided us with much comfort and pleasure during the times we were on board. There were always evening entertainment options, and a group of hard-core (and quite senior!) party-ers could be found dancing nightly in one of the clubs, while others won some money in the casino.

But we had one more delight in store for us on the day we left the ship as we waited for our flight home. Zenia’s Travel Clubbers enjoyed a private tour of a working winery and vineyard outside of Rome, the Castello di Pietra. After an outdoor family-style luncheon that made everyone regret leaving Italy, we had the option of taking off our shoes, rolling up our pants and having a real “I Love Lucy” grape-stomping experience, squishing our choice of red or green grapes in sawed-off barrels. The laughter was contagious, and the experience was an excellent conclusion to our trip.

Our cruise experience was exhilarating, invigorating and exciting (and sometimes exhausting!), with enduring memories captured in thousands of photos. 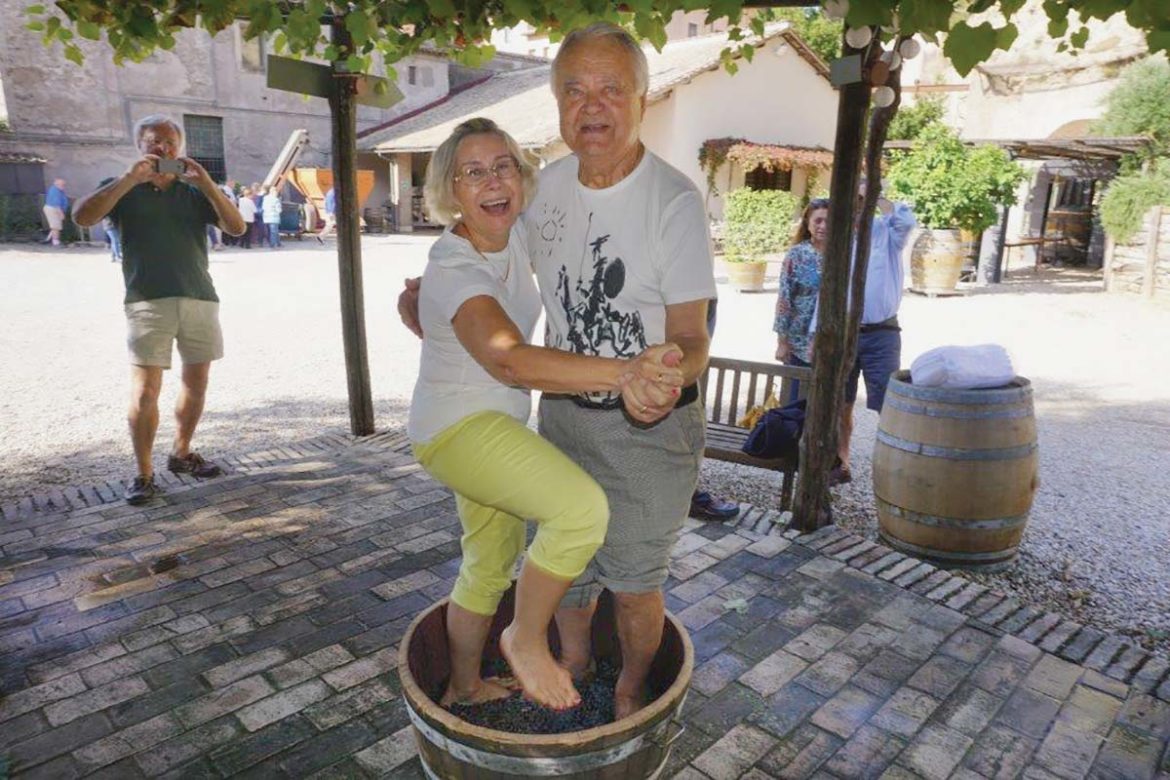 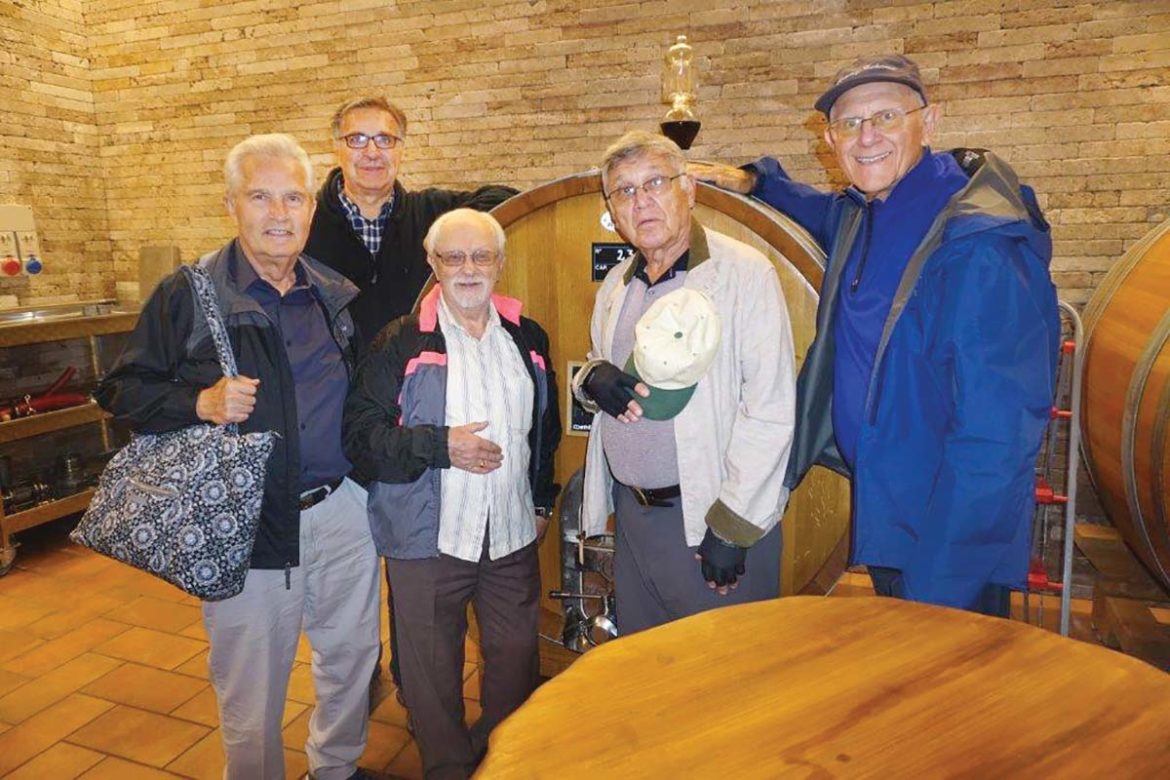 Travelers inspect the wine barrels on a visit to the vineyards of Frascati wine country outside of Rome.