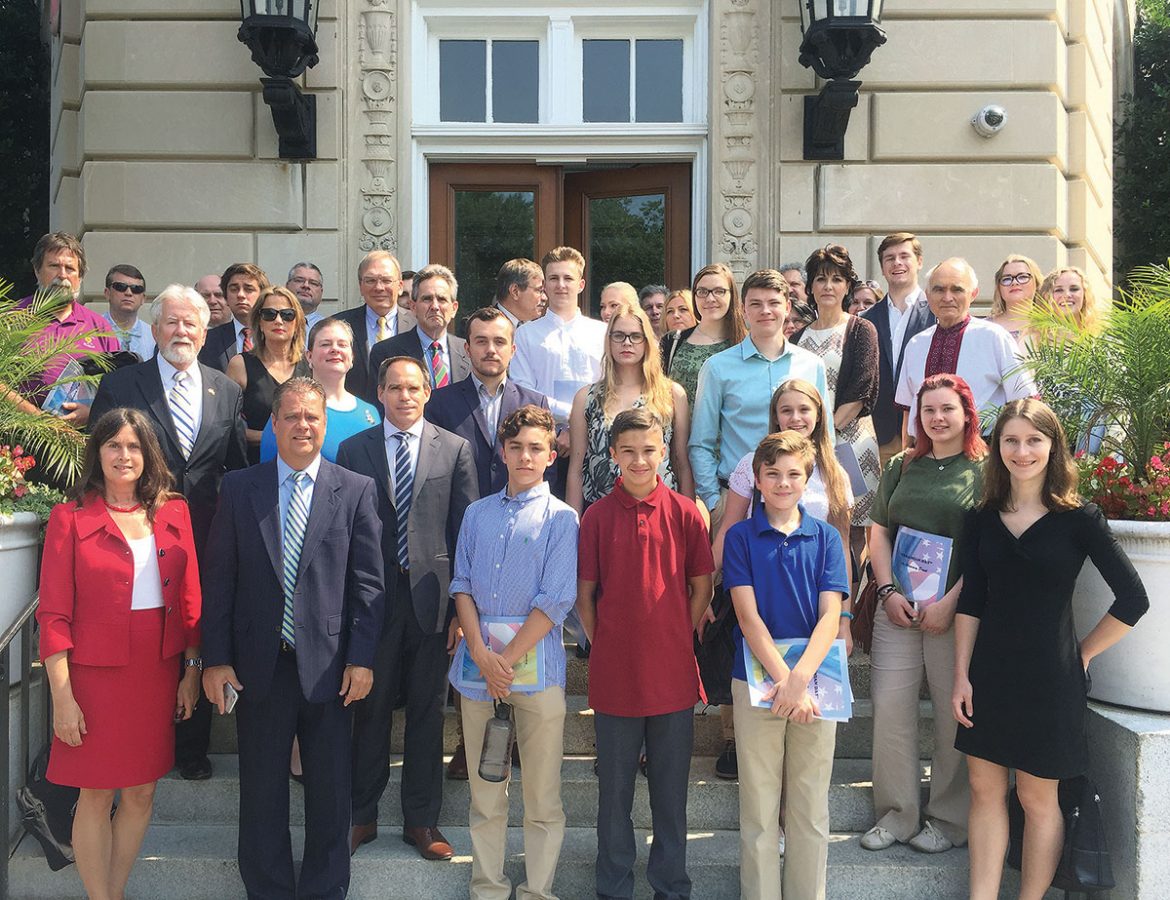 Ukrainian Day participants pose for a group photo before heading out to their congressional meetings.

“Since the Revolution of Dignity, we have held Ukrainian Day advocacy events at least two to three times a year – an opportunity during which we meet with our elected representatives to speak on topics related to Ukraine,” noted event organizer Michael Sawkiw, director of the Ukrainian National Information Service (UNIS), the public affairs office of the Ukrainian Congress Committee of America (UCCA).

“It is incredibly important that the Ukrainian community support and attend these advocacy events to relate our concerns to members of Congress about the need for greater support for Ukraine during these turbulent and inspiring times in its history,” Mr. Sawkiw noted. “Ukrainian Americans must send a message that Ukraine’s courage to fight for democracy is not Ukraine’s battle alone and must be supported vigorously by the United States.”

The day began with a briefing session for participants to review various congressional bills that affect Ukraine. They were also briefed by foreign policy and law experts who spoke about the role of the community in its advocacy of issues in Congress. Ambassador Temuri Yakobashvili, former ambassador of Georgia to the United States, highlighted the immense moral responsibility of advocacy for Ukraine at a time of peril in that country. In addition, Prof. Robert Kaufman described the nature of Vladimir Putin’s disinformation campaign against Ukraine and how it can be unraveled by advocacy events such as Ukrainian Days. Both speakers noted the overwhelming bipartisan support in Congress for Ukraine, which the community’s efforts helped to garner.

Briefing papers and talking points distributed to the participants included four main topics of advocacy: military assistance to Ukraine; increased sanctions against Russia for its non-implementation of the Minsk accords and the illegal annexation of Crimea; sustained levels of foreign assistance for Ukraine in the Fiscal Year 2018 budget; and an official U.S. policy for non-recognition of the illegal annexation of the Crimean peninsula by the Russian Federation.

Participants were also armed with the latest information regarding the Russia sanctions regime, which included a bipartisan effort in the U.S. Senate to increase and codify sanctions against Russia. In the afetrnoon of June 14, the U.S. Senate passed a crucial amendment to the Countering Iran’s Destabilizing Activities Act (S. 722) by an overwhelming bipartisan vote of 97-2. S. Amend. 232 adds new sanctions targeting various sectors in Russia’s economy, and imposes sanctions on individuals affiliated with Russia’s defense sector. The bill is now being reviewed in the House of Representatives. [See the Action Item on this topic on page 7 of this issue.]

Of unique importance was the participation of the Youth Civics Group of the Ukrainian Heritage School in the Philadelphia Metropolitan region. The group, consisting of high school students with an affinity for public service and civic-minded activism, were divided amongst various groups and interacted with congressional offices during their meetings. Iryna Galaj, Eugene Luciw and Mykola Hryckowian serve as the youth group’s mentors and have provided leadership and guidance in their civic activism. 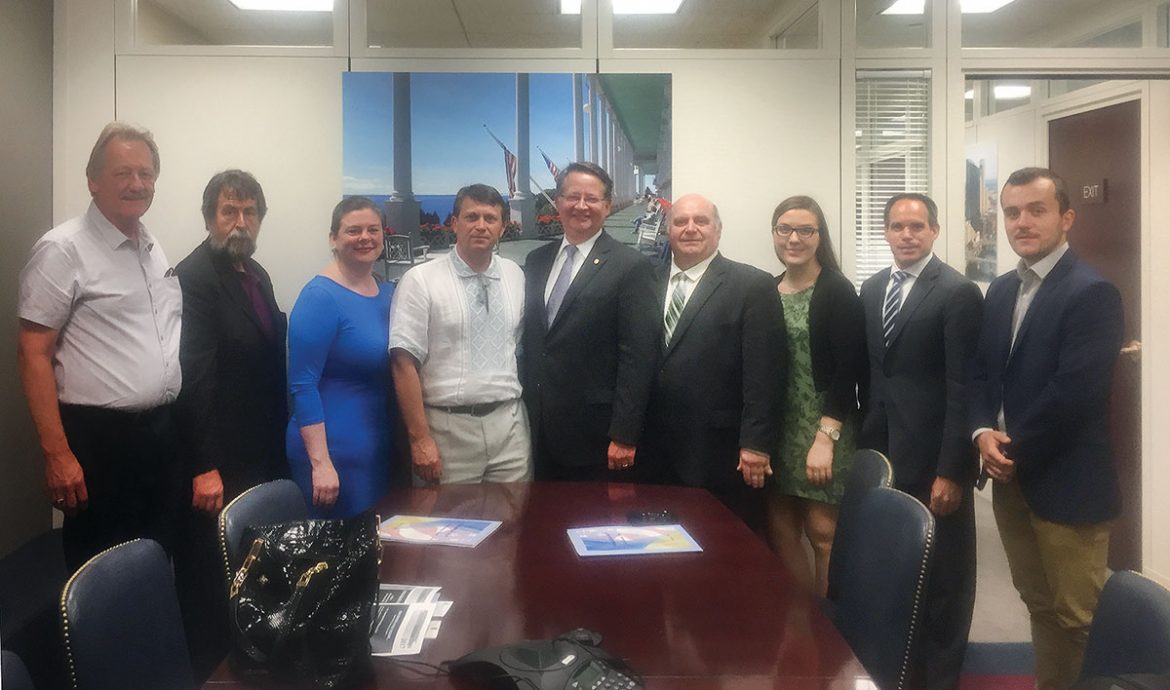 Commenting on their experience in Washington, the students   wanted to convey a strong message that as Ukrainian Americans, they are rightfully concerned about U.S.-Ukraine relations. Their outlook for the future envisions a Ukraine that is free from foreign aggression and has a strong relationship with the United States. The students were afforded an opportunity to meet with Rep. Brian Fitzpatrick (R-Pa.) in the district a few days after the Ukrainian Day event in Washington. As a co-chair of the Congressional Ukrainian Caucus, Rep. Fitzpatrick was receptive to the talking points posed by the students and their mentors.

During the course of the day, California Ukrainians were afforded the opportunity to meet with Rep. Dana Rohrabacher (R-Calif.). The nearly two-hour meeting was cordial yet contentious at times as the congressman and the advocates remained firm in their respective convictions. As noted by numerous community activists, advocacy events are important in promoting your issues to friends and others.

The successful day was followed by an evening congressional reception honoring and commemorating the 20th anniversary of the formation of the Congressional Ukrainian Caucus. Founded in 1997 on the initiative of the Ukrainian National Information Service, the caucus has stood in the vanguard of advancing mutually beneficial U.S.-Ukraine relations. The reception was attended by members of the Congressional Ukrainian Caucus, as well as by the speaker of Ukraine’s Parliament, Andriy Parubiy, and the acting minister of health, Dr. Ulana Suprun. [See related story on page 4 of this issue.]