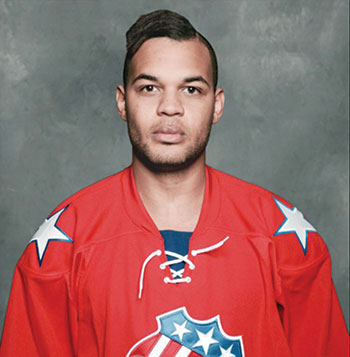 Attempting to reassert his voice, Aliu wrote a 4,000-word article for The Players’ Tribune on May 19, 2020, headlined “Hockey is not for everyone” – a purposeful dig at the “Hockey is for everyone” diversity campaign the NHL has run since 1998. His story included Peters’ comments, Downie’s cross-check (see part 1) and other descriptions of racial abuse in raw detail, prompting a viral response way more positive than what Aliu heard back after his original tweets. He formed direct relationships with activists like Alyssa Milano, Marshawn Lynch and other NHL players.

Six days later came the George Floyd incident in Minneapolis with Aliu marching in a Black Lives Matter protest in Toronto, on the one hand, while also advocating action on a different front. Conversations with fellow Black players resumed, a common feeling emerged, enough was enough and an organization was created with Aliu and San Jose’s Evander Kane as co-heads. Colin Kaepernick was a guest speaker offering advice at an early meeting. Matthew Dumba, Trevor Dailey, Chris Stewart, Wayne Simmonds and Joel Ward joined Kane and Aliu as founding members of a new unified group calling themselves the Hockey Diversity Alliance. They officially launched on June 8, 2020, with a mission to “eradicate racism and intolerance in hockey.” The group said they would focus on community outreach and antiracism education.

Subsequently, the NHL invited the HDA to share its objectives in a virtual meeting in late June, the players using this as a chance to tell the commissioner about their encounters with racism in the sport. In mid-July, the HDA presented league officials with a presentation titled, “Our ask of the NHL,” which included hiring targets for Black personnel, funding to back grassroots initiatives and programming, and antiracism displays during the 2020 playoffs. The league came back with a postseason messaging campaign around a catch-all hashtag, #WeSkateFor, lumping the Black Lives Matter movement together with the pandemic and other unrelated causes.

Publicly, the sides seemed united. Privately, the HDA’s frustrations were mounting. Talks continued with the HDA’s advisory board replacing the players when meetings got too heated. Players made their voices heard elsewhere, most from afar, serving as sounding boards for white players with questions and helping advance the discussions inside the bubbles that led to the NHL’s two-day postponement in late August.

On September 11, 2020, the NHL responded to the HDA with a document titled “Hockey’s commitment to cultural change” that was geared toward erasing racism in hockey. The text did not contain any definitive hiring targets or specific funding, only vague vows on further engagements. To HDA players this was evidence of an unbridgeable gap with the NHL. To the league this was proof the HDA wanted to control the execution of the plan, were not willing to compromise, and did not want to be partners. Several Black NHL players, including P.K. Subban, winger J.T. Brown and Vegas enforcer Ryan Reaves, decided to work with the NHL on a series of inclusion committees rather than joining the HDA. The league invited HDA members onto each of the committees when they began meeting in October, but the HDA declined. Aliu has thus far rejected the notion the HDA would be better served by working within the NHL’s structure, believing systemic change requires a more radical approach.

Akim Aliu remains convinced he should be playing in the NHL, he was incorrectly labeled un-coachable after the Peters incident and that he was blackballed. He hopes to learn the truth about why he wasn’t able to be successful in the NHL once his ongoing case’s investigation concludes.

Despite his frustration with the NHL, Aliu believes the HDA is making progress. He cites the hiring of three group members – Ward (Las Vegas), Daley (Pittsburgh) and Stewart (Philadelphia) – plus Florida’s Brett Peterson as the league’s first Black assistant general manager as proof that progress is being made. He has high hopes for ongoing conversations with Cleveland Cavaliers representatives about potentially building a basketball-hockey youth program in the Cleveland area.

The coalition has successfully partnered with several NHL sponsors in these days of newfound corporate support pushing for social justice across all sports. Sportsnet is slated to produce antiracism education videos, while Kraft Heinz and Scotiabank are building youth programs in Toronto, Vancouver and Pittsburgh. The HDA’s message to the NHL is that everybody is on board to do the right thing, including the league’s partners.

Ironically, the NHL is also developing a Black youth hockey program in Pittsburgh, which is to serve as a model for other teams in the future. Should the HDA’s and NHL’s pilot programs succeed and their efforts expand, the landscape could consist of dueling grassroots programs run by each group in the same locales, funded by the same sponsors, with the same goals. One can only imagine how much quicker and efficient the progress could be if the HDA and the NHL worked in unison.

In the meantime, Akim Aliu and his fellow HDA members keep fighting, together and alone.

About Akim Aliu: Born April 24, 1989, in Okene, Nigeria, 6’4”, 225 lbs., Aliu has played right wing and defense. He was the 56th overall selection by Chicago in the 2007 NHL Entry Draft. Akim grew up in Kyiv, Ukraine. His father, Tai, is Nigerian and attended university in Kyiv on a track and field scholarship where he met and married Larissa, a Ukrainian. Aliu considers himself a Ukrainian-Canadian and attests his family takes part in Ukrainian culture. He would have eagerly played for the Ukrainian national hockey team, if ever asked. Aliu speaks fluent Ukrainian and Russian, and his parents moved to the Toronto area in Canada when he was seven following the Soviet Union’s demise. He played for three major junior clubs in the Ontario Hockey League: Winsor, Sudbury and London. He played for nine American Hockey League clubs: Rockford, Chicago, Peoria, Abbotsford, Hamilton, Hartford, Rochester, Oklahoma City and Cleveland. He saw action in the East Coast Hockey League with Toledo, Gwinnett, Colorado, Bakersfield, Florida, Atlanta and Orlando. Overseas, he played in Sweden, Slovakia, Czech Republic and the Kontinental Hockey League. In seven career NHL contests he scored two goals, one assist and accumulated 26 penalty minutes, all with Calgary (2011-2012 and 2012-2013). He played in 10 different leagues and on 26 different teams.