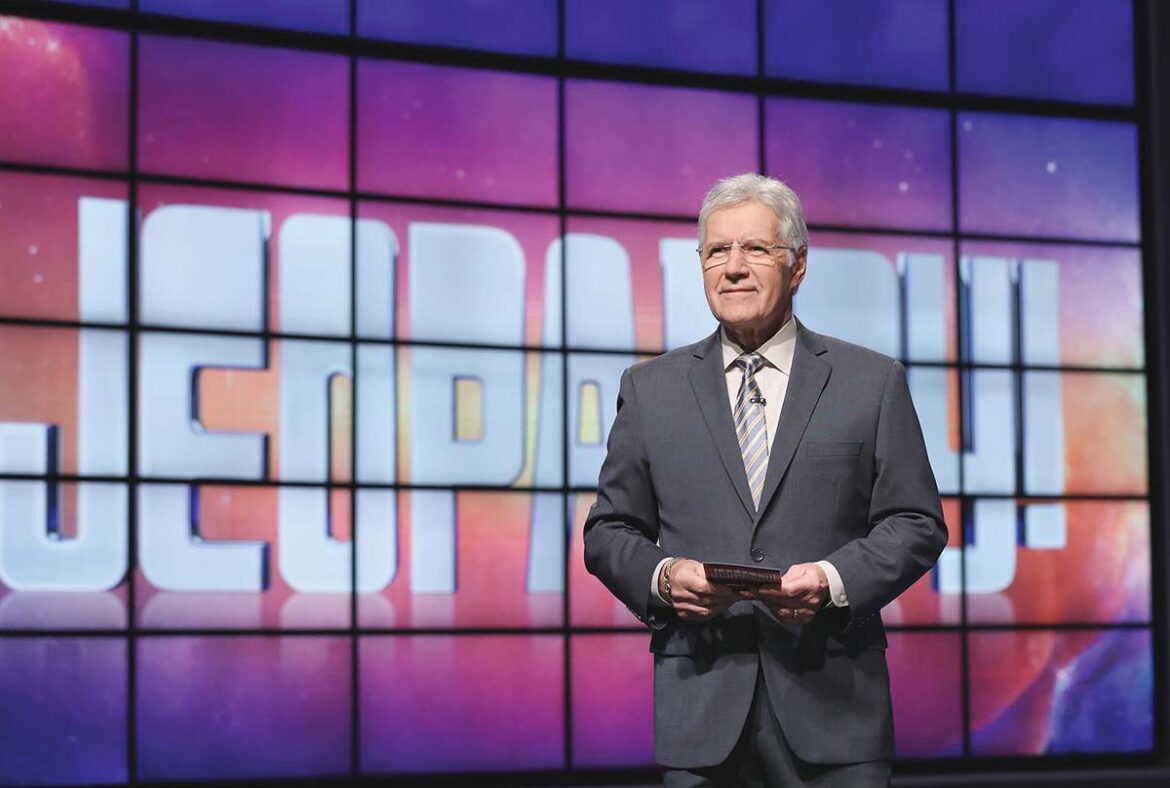 Alex Trebek on the set of the game show “Jeopardy!”

WALTHAM, M.A. – Answer: This man – who for 37 seasons played the quintessential host of a world-famous, widely beloved quiz show, and whose father, George Edward Terebeychuk, emigrated from Ukraine as a child – died of pancreatic cancer on November 8. He was 80.

Question: Who was George Alexander Trebek?

Born on July 22, 1940, in Sudbury, Ontario, Alex Trebek was synonymous with “Jeopardy!,” the Emmy and Peabody award-winning syndicated game show in which questions were presented to participants as answers, and answers were given in the form of questions.

Mr. Trebek was famous for his work in television and film – he made numerous cameo appearances as himself on “Saturday Night Live” and “The Simpsons,” and appeared in the movies “Groundhog Day,” “Finding Forrester” and “Charlie’s Angels,” to name a few.

Less well-known were his Ukrainian roots and his interest in his father’s homeland.

Writing in his 2020 memoir, “The Answer Is… : Reflections on My Life,” Mr. Trebek said, “My father, George Edward Terebeychuk, was this little Ukrainian immigrant who had earned his passage money to Canada mainly by playing violin at weddings and parties in his hometown of Nuyno [Volyn Oblast]. He arrived from Ukraine in the late 1920s. He was on a train bound for Manitoba to be a farm laborer, but when he got to Ottawa, he decided he didn’t want to work on a farm, and he jumped off. He had a cousin, my uncle Mike, who lived in Toronto, and he touched base with him. Once dad mastered the fundamentals of basic English and changed his last name to match his cousin’s, Mike got him a starting job in the kitchen at the King Edward Hotel, which was one of the two largest first-class hotels in Toronto.”

Mr. Trebek’s father eventually met and married Lucille Marie Lagace, a French-Canadian. Per a November 11 story in The New Yorker, Mr. Trebek’s parents spoke a variety of different languages. “Between the two of them, they spoke English, French, Ukrainian, Polish and Russian,” wrote the story’s author, Doreen St. Felix. “It was like a mini United Nations,” Mr. Trebek said of life in his parents’ home during a speech in 2011 at the Ukrainian Cultural Center in Los Angeles, according to The New Yorker.

Writing in his memoir, Mr. Trebek offered further insight into his childhood, noting the influence that his father’s Eastern European culture had on the family. “In Toronto, my parents had a ton of Ukrainian, Russian and Polish friends, and that made for some great celebrations, great parties. On Sundays everyone came over to our place. It was a three-story rented house with an in-ground gas pump in the backyard. … We hosted because everyone else lived in apartments. There were lavish spreads of herring, dill pickles, cabbage rolls – and, of course, schnapps and vodka. Poor Barbara [Mr. Trebek’s younger sister] went to the dining table once, wanting a glass of water. She grabbed a glass that looked like it contained water. It contained vodka. She sucked that up and then started screaming,” Mr. Trebek recalled.

In 1988, as part of a series of events dedicated to the observance of the Millennium of Christianity in Ukraine, Mr. Trebek took part in a gala musical concert in New York’s Lincoln Center. He opened the musical tribute with an introduction before a full house of more than 2,700 people, The Ukrainian Weekly reported on February 21, 1988. “Mr. Trebek amused the audience with his version of St. Volodymyr’s acceptance of Christianity on Valentine’s Day. He also told a few anecdotes about his Ukrainian relatives,” Marta Kolomayets wrote in The Weekly.

Lesya Liteplo, a Ukrainian American who appeared on “Jeopardy!” shortly after Mr. Trebek tore his Achilles’ tendon chasing a burglar from his hotel room in 2011, recalled in a recent telephone interview with The Weekly that Mr. Trebek had a genuine rapport with the show’s staff. During taping of the episode in which she appeared, Ms. Liteplo recalled that staff all wore T-shirts poking fun at the host’s injury. “It was clear that the crew really liked him and were very affectionate with him,” Ms. Liteplo said.

Often described as a dignified game show host who possessed a professorial demeanor, Mr. Trebek was also said to have a quirky, though quiet sense of humor. After the episode in which she appeared finished filming, Ms. Liteplo, who uses the first name “Alex” in English, stood for a photo with Mr. Trebek. Just before the photo, Mr. Trebek turned to Alex and said, “Alex and Alex, together again for the first time.”