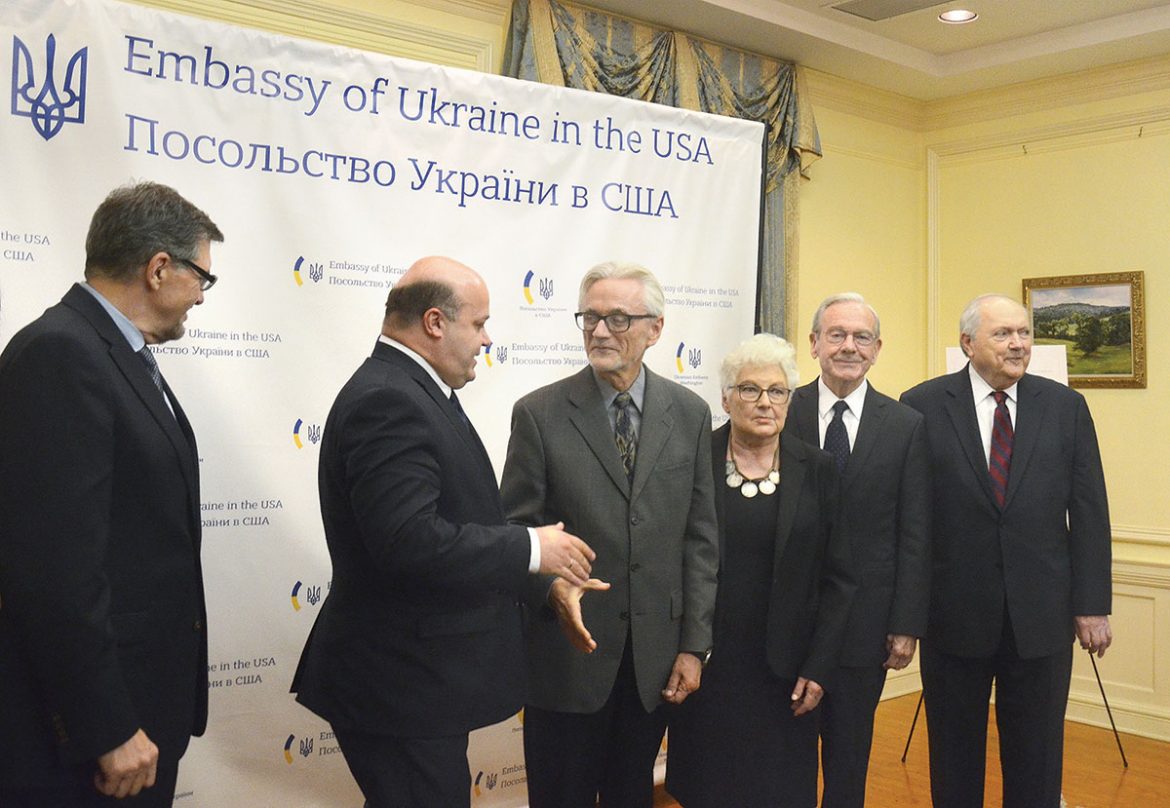 Ambassador Valeriy Chaly congratulates Alexander Motyl, laureate of the Omelian and Tatiana Antonovych Foundation award for 2019. Standing beside them at the September 13 ceremony at the Embassy of Ukraine in Washington are Serhii Plokhy of the Harvard University Ukrainian Research Institute (left), and (on the right) the head of the award advisory jury, Martha Bohachevsky-Chomiak, and foundation board members Ihor Voyevidka and Roman Slonewsky.

WASHINGTON – This year’s Omelian and Tatiana Antonovych Foundation award was presented on September 13 at the Embassy of Ukraine to Alexander Motyl, professor of political science at Rutgers University, who also taught at Columbia, Harvard and other universities.

As Dr. Martha Bohachevsky-Chomiak, who chairs the Antonovych award nomination committee that selected him for this year’s award, noted during the ceremony, Prof. Motyl had focused much of his attention over the past few decades on Ukraine’s development of its independent course after the fall of the Soviet Union.

“Ukraine now makes and promotes its news worldwide, sometimes even on the front pages,” she said, noting that Prof. Motyl “continues to be a sobering voice among the myriad of writers and scholars about contemporary Ukraine, and remains interested in the country, not just in what makes the big headlines.”

“Motyl studied Ukraine, wrote – and eventually blogged about it – before it was fashionable to be an expert on Ukraine,” she said.

Prof. Motyl is the 73rd award laureate since the Antonovych Foundation award presentations began in 1981. The first award laureate was the Ukrainian writer Vasyl Barka, and last year’s was another writer, Yuriy Shcherbak.

Opening the evening event at the Ukrainian Embassy, Ambassador Valeriy Chaly thanked the foundation for choosing to conduct its award presentation event 10 years ago at the Embassy’s historic building. He also shared the news that his four-year ambassadorial assignment here would end in two days, September 15.

On behalf of the foundation, Ihor Voyevidka expressed its gratitude for the ambassador’s collaboration and support of their work.

Accepting his award, Prof. Motyl spoke about how his interest in Ukraine back in Soviet times developed into a need to engage the world in this subject.

He noted that “there has been a sea change in the view of Ukraine” and that today “Ukrainian studies are fully in the mainstream,” despite the continuing war with Russia and other negative happenings.

For years, Ukraine was criticized for not being like Poland and Hungary. But now, as he noted, that isn’t so. “Countries zig, and countries zag.”

And concluding his remarks, Prof. Motyl pointed out that now a “single stream” has formed, uniting Ukraine and its diaspora.

Omelan and Tatiana Antonovych established their foundation in 1980, with the goal of advancing the study of Ukrainian culture. Since then, it has donated about $3 million to help finance the development of many academic and cultural institutions and monuments in Ukraine, among them, the reconstruction the National University of Kyiv-Mohyla Academy’s main library, the renovation of the Vasyl Stefanyk Library and Artists Palace in Lviv, and the building of the Boykivshchyna Museum in Dolyna, in western Ukraine, where Omelan Antonovych was born in 1914.

The foundation also provided $100,000 to help finance the building of the Ukrainian Holodomor Memorial in Washington, which was officially dedicated three years ago.

Omelan Antonovych spent his early adult years as a Ukrainian nationalist activist and spent some time as a political prisoner in Polish and Nazi prisons. Later, he received a law degree at the Ukrainian Free University in Prague in 1943. After World War II, he married Tatiana Terlecky, a physician who later became a world-renowned kidney specialist.

After the war, the couple emigrated to the United States, settling in Washington, where Dr. Tatiana Antonovych worked as a scholar and taught in the capital area medical schools, while Mr. Antonovych focused on ranching and real estate.