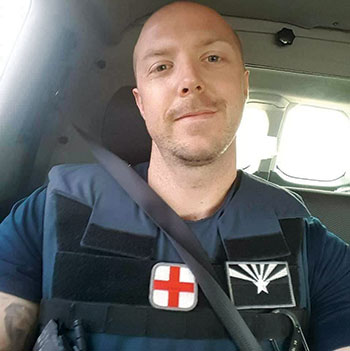 Joseph Stone, an American paramedic who was killed in eastern Ukraine on April 23, in a photo provided by the Stone family and published on Tucson.com.

Joseph Stone, an American paramedic who was killed in eastern Ukraine on April 23, in a photo provided by the Stone family and published on Tucson.com.

KYIV – It usually takes events of international significance for the world to once again notice that Russia is still waging war in Ukraine, which is already in its fourth year and has claimed more than 10,000 lives and uprooted 2 million people from their homes.

This time, it was the tragic death of Joseph Stone, a 36-year-old American paramedic who was killed on April 23 when the armored vehicle he was in likely struck a landmine in the village of Pryshyb in occupied Luhansk Oblast.

He was part of a team of unarmed observers from the Organization for Security and Cooperation in Europe (OSCE), the 57-nation body that is charged with monitoring a truce that has never fully taken hold between the warring sides. The incident marked the first death of an active duty OSCE observer in Ukraine since the monitoring mission started in March 2014.

Two other monitors, a German woman and a Czech man, were injured in the blast, but are in stable condition.

Moscow and Kyiv subsequently exchanged blame for the mine being planted near the village. Two additional anti-tank mines and a trip wire were defused in the area on April 24, according to Russian proxy Andrey Marochko who calls himself a lieutenant-colonel in the Kremlin-created “Luhansk People’s Republic.”

Ukrainian authorities are investigating the blast that occurred in Russian-occupied territory. As part of its mandate in Ukraine to oversee the latest ceasefire that was brokered in February 2015, OSCE observers should have “unfettered” access in the war zone, but never do.

“This crime must be investigated and those responsible must be punished,” Ukrainian President Petro Poroshenko wrote on Facebook.

Acting U.S. State Department spokesperson Mark Toner said Secretary of State Rex Tillerson and President Poroshenko “agreed that the OSCE SMM has played a vital role in its role of monitoring the Minsk agreements designed to bring peace to eastern Ukraine, and that this tragic incident makes clear the need for all sides – and particularly the Russian-led separatist forces – to implement their commitments under the Minsk agreements immediately.”

German Chancellor Angela Merkel expressed outrage, saying that “the conflict parties must also finally implement the long-agreed ceasefire… And there, the Russia-supported separatists, who are illegally and violently occupying parts of Ukrainian territory bear a particular responsibility.”

OSCE special monitoring mission chief monitor Ertugrul Apakan said that, “in spite of this tragedy, we remain committed to fulfilling our mandate and contributing to bring peace… my thoughts and condolences are with the loved ones of the team member who lost his life and a speedy recovery to the injured.”

The OSCE has constantly been harassed and received what it calls “life threats” while fulfilling its mission. Since January 15, 2015, the group has faced 183 such threats that included patrols being shot at, nearby shelling, severe physical and verbal threats as well as damage to assets like unmanned aerial vehicles (drones).

Landmines in particular have posed a danger to civilians living in the eastern Ukrainian war zone. At least 250 people have been killed and 470 injured by explosive remnants since mid-2014, according to the International Committee of the Red Cross. And there have been more than 50 monthly casualties from mines and improvised devices since December 2015, according to HALO Trust, an international charity that specializes in removing land mines which is based in the United Kingdom and is also a registered non-profit in the U.S.

The 36-year-old American medic’s body was flown to the U.S.

This was the first time the Tucson, Ariz., resident was working in an active war zone, his brother Matthew, 34, told Tucson.com. He had also worked with aid groups in Afghanistan and Liberia.

Born in Milwaukee, Joseph Stone graduated from Pima Community College before embarking on a nine-year career as a paramedic.

“The world really did lose something special on April 23,” Matthew Stone told Tucson.com. “He always downplayed the danger of it [working in Ukraine], but it was there.”

In a separate interview with CNN, Matthew Stone described his brother as a “secular activist” and a “humanist” who had a great passion for thinkers in the secularist and atheist traditions.

Joseph Stone is survived by his 13-year-old son, a longtime girlfriend, two brothers and his mother.

The death of the OSCE monitoring mission member was a reminder that people are dying on a daily basis in war-torn Donbas. At least 75 Ukrainian soldiers have been killed and 420 wounded so far this year. Overnight on April 25, three government troops died fighting near Novooleksandrivka, and four were wounded. Separately, Ukrainian military analyst Dmytro Tymchuk reported on Facebook that a Russian sniper from Ulyanovsk was killed near Bakhmut (formerly Artemivsk) in Donetsk Oblast.

As of April 25, the OSCE resumed patrolling the occupied parts of Luhansk Oblast, the deputy head of the OSCE SMM regional office, Arne Dalhaug, announced in a briefing.

“The patrol of the Luhansk team yesterday was mainly canceled in connection with the tragic incident. We resume patrolling today,” he said, specifying that it was being carried out with certain restrictions.

The monitoring mission in Ukraine has over 650 monitors from 44 OSCE participating states as of April 19. Almost 600 are based in eastern Ukraine. About 6 percent, or 38, of the monitors are Russian.

When asked if Russia, as a party to the conflict, compromises OSCE’s mandate and mission in Ukraine, the security watchdog’s press service said: “Regardless of nationalities, we have a number of mechanisms in place to ensure the impartiality of the information we provide… Before anything is included in a report, all patrol members must agree on the information.”

The OSCE added that each monitor signs a “code of conduct” and that “any credible allegation of violation of the code, based on objectively verifiable evidence, is treated with considerable seriousness. When any of us violates it, corrective action must be and is taken.”

The group’s mandate was extended for one year on April 1 with a budget of 105.5 million euros.