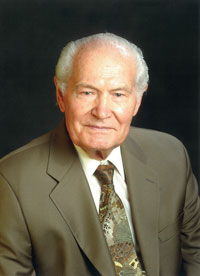 Mr. Kolomayets was born on February 12, 1927, in the “chornozem” (black earth) of the Kobeliaky region of the Poltava Oblast in eastern Ukraine, the oldest son of Ivan Kolomayets and Maria Vasylenko. He was born at a time of great turmoil in that part of the world; when he was 5 years old, Stalin’s Famine decimated the land-holding class of Ukraine. Several members of the immediate family perished during the Holodomor, but Mr. Kolomayets’ father moved the family to the big city of Dnipropetrovsk, where he spent his childhood and first showed a talent for drawing and sketching, often serving as the illustrator of the school newspaper.

In 1941, the family fled the second world war and arrived in Belgium, where Mr. Kolomayets worked in the coal mines at night and attended school during the day, eventually completing two art degrees at St. Luke’s Institute (1948-1952) and the Royal Academy of Fine Arts (1952-1953), both in Liege, where he had the opportunity to study European painting and understand the creative trends of that period. Such masters as Picasso, Matisse, Gauguin and Braque have influenced his style.

In 1953, Mr. Kolomayets immigrated to the United States and settled in Chicago, where he quickly became involved in the artistic life of Ukrainian Chicago and was a founding member of the Monolith Group, a collective of artists and writers.

At a group art show in 1956 he met Luba Karawan and they married on February 16, 1957; they had two children, Marta and Andrew.

Mr. Kolomayets worked as a commercial artist for almost 40 years, but his passion was always painting and during his lifetime he had 42 one-man shows, spanning a 60-year career. More than 500 of the artist’s works – both oils and watercolors – are in numerous private collections and galleries in Argentina, Australia, Belgium, England, France, the United States, Canada and Ukraine.

Mr. Kolomayets was recognized as an Honored Artist of Ukraine in 2007. Once Ukraine became independent, he was engaged in many causes helping his native land, including the Narodnyi Rukh of Ukraine, (Chicago branch), the Friends of the Ukrainian Consulate in Chicago and the Ukraine Genocide Famine Foundation – U.S.A.

“My entire life has been defined by my deep respect for all forms of art, which I take seriously and with a sense of great devotion. This is particularly true of my attitude toward painting. Since childhood, the idealization of everything that is beautiful has encompassed my universe. The credo ‘beauty will save the world’ inspires me to believe that the world can be a better place for all of mankind,” he wrote in 2005.

He often said that he was inspired by everything around him, reading newspapers or books, watching movies, talking to people. But in his art, one can see that he was always vitalized by his native land and his themes often reflect Scythian history, Ukraine’s Kozak glory, the tragedies of the Holodomor and Chornobyl.

The late Mykola Marychevsky, editor in chief of Fine Art and Artanya, two art journals published in Ukraine, wrote in his preface to the Kolomayets’ monograph published in 2005: “The creative works of Anatole Kolomayets synthesize what he acquired and what he has inherited. His artistic skills and sense of color are the generous gifts of his native land. And his training in Western Europe allowed him to hone his professional skills at the very heart of the movement toward modern art trends. The artist can truly be called a fortunate man. Throughout his life, Kolomayets has been fortunate enough to translate ever-changing circumstances in his life into possibilities for creative enrichment. 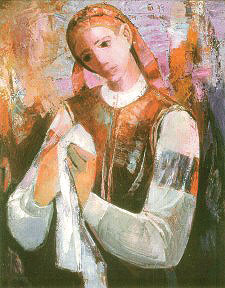 “The creative fire that has burned in the soul of Kolomayets for more than five decades, is first of all, focused on the harmony of the surrounding world, and this is why his works do not singe, but warm the viewer. They warm everyone who is free from the prejudice of consumerism and is able to confide the artistic manifestation of the artist’s will. His paintings are gifts to those who dare to rise above the boundaries of the mundane.”

A panakhyda, attended by more than 350 mourners, was held on December 14 at Muzyka Funeral Home in Chicago. On December 15, the funeral service took place at St. Volodymyr Ukrainian Orthodox Cathedral in Chicago, followed by interment at Elmwood Cemetery in River Grove, Ill.

Mr. Kolomayets is survived by his loving wife, Luba, daughter Marta with husband Danylo Yanevsky; son Andrew with wife Zoriana; and grandchildren Damyan, Mariana, Inessa and Maksym. Also surviving are his brother George with wife Aleksandra and family, brother-in-law Oleh Karawan with wife Ivanka and family, in-laws Levko and Vera Remeniuk and family, as well as relatives in the United States and Ukraine.

In lieu of flowers, the family asks that donations in memory of Mr. Kolomayets be made to the Ukrainian Genocide Famine Foundation – U.S.A., the Ukrainian Orthodox Church – Kyiv Patriarchate or the Ukrainian National Museum in Chicago.