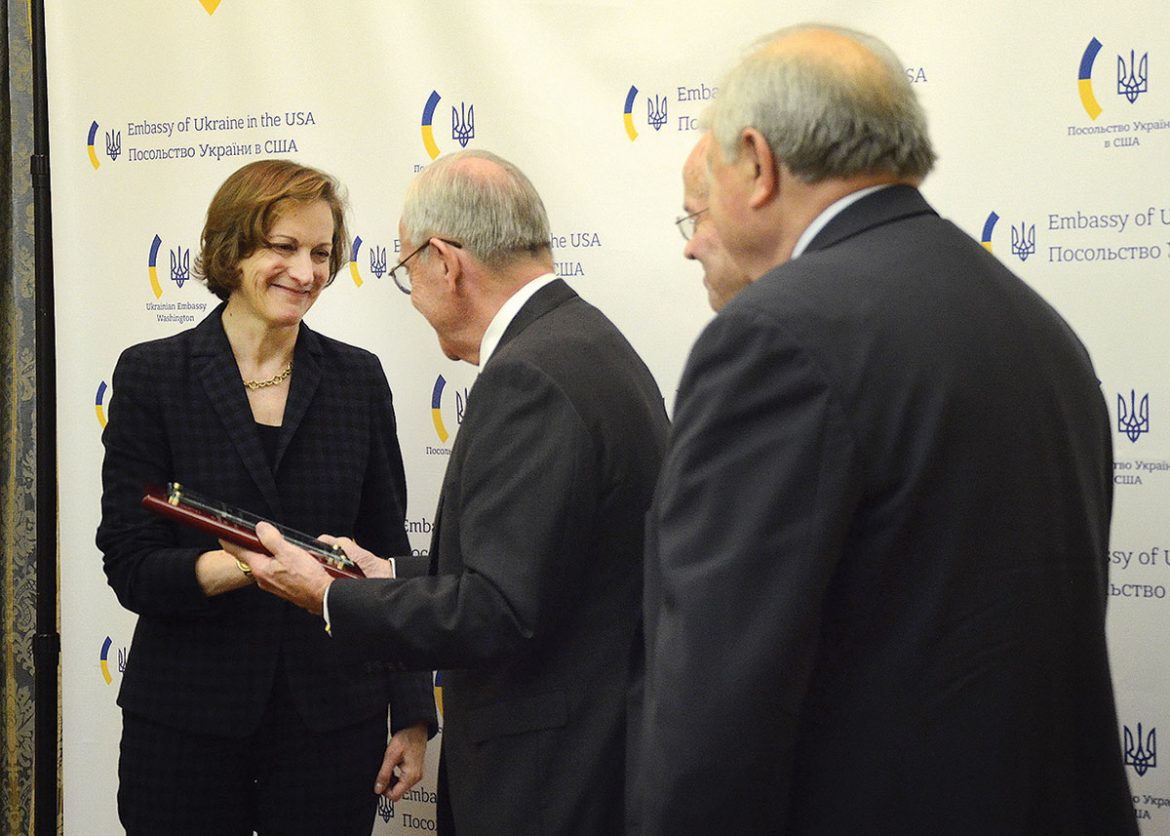 The director of the Omelan and Tatiana Antonovych Foundation, Dr. Ihor Voyevidka, presents Anne Applebaum with the 2017 Antonovych Award for her “coverage of Ukraine in international media and the pursuit of historical truth.” Standing behind him are two other members of the board, Andrew Lewycky and Dr. Roman Szporluk.

WASHINGTON – Anne Applebaum, the Pulitzer Prize-winning author, journalist and commentator, who has spent most of her career writing about the historic developments in Eastern Europe, the Soviet Union and Russia, was honored with the 2017 Omelan and Tatiana Antonovych Foundation Award for her work and its effect on Ukraine.

The award presentation ceremony at the Embassy of Ukraine in Washington on October 28 also focused on her latest historical book, “Red Famine: Stalin’s War on Ukraine,” which was published after the Antonovych Award committee had already made its decision that she would be the 70th winner of the award since the Ukrainian writer Vasyl Barka won the first award in 1981. (Awards in the past were presented to more than one person each year.) 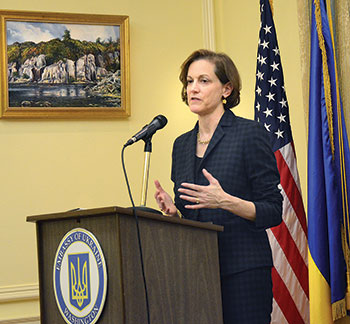 Anne Applebaum expresses her gratitude for being selected as the 2017 recipient of the Omelan and Tatiana Antonovych Foundation Award.

Opening the evening event, Ukraine’s Ambassador to the U.S. Valeriy Chaly expressed his country’s gratitude to Omelan and Tatiana Antonovych – now deceased – and their foundation for their work in the positive development of the bilateral relations between the United States and Ukraine.

He singled out three of the award’s recipients – Timothy Snyder, Serhiy Plokhy and Ms. Applebaum – for looking into the most violent crime against Ukraine, Stalin’s genocidal Holodomor in the 1930s, which, he added, will be commemorated once again on November 7 at the Holodomor Memorial in Washington.

The ambassador also introduced Ukrainian Vice Prime Minister for European and Euro-Atlantic Integration Ivanna Klympush-Tsintsadze, who expressed her appreciation at being able to participate in this event “honoring a historian that is bringing more truth to the world about my country and is helping us to open eyes to some of the very difficult parts of our history.”

“But one more thing that we also are trying to achieve today is to actually bring back Ukraine, return it back to the cultural and historical map of Europe and the whole world. And I am sure that this particular book that you have written is helping in this very important task for us, because we are going to be better understood, we’re going to be better known, and then, probably, hopefully, better received,” she said.

The director of the Antonovych Foundation, Dr. Ihor Voyevidka, thanked Ambassador Chaly and his predecessors for hosting this event at the Embassy of Ukraine since 2009.

“We very strongly believe this clearly exemplifies the cooperation between Kyiv and the diaspora,” he said, adding that “special gravitas” is given to award candidates that meet the highest criteria and are not Ukrainians but speak with an experienced and objective voice about Ukraine.

Last year’s Antonovych Award laureate, Dr. Plokhy, professor of history and director of the Ukrainian Research Institute at Harvard University, was called on to introduce this year’s laureate.

As he pointed out, Ms. Applebaum is a world-renowned intellectual, journalist, historian, scholar, writer, with a career that included editorial positions at The Washington Post and other newspapers, and a visiting professorship at the London School of Economics. She has authored a number of books, among them the Pulitzer prize-winning “Gulag: A History,” “Iron Curtain: The Crushing of Eastern Europe, 1944-1956” and “Between East and West: Across the Borderlands of Europe.”

“And now we have ‘Red Famine,’ that is focused specifically on communism and the legacy of the Russian Revolution of 1917 that we are talking about so much this year, about the impact of those tragic events on Ukraine,” Dr. Plokhy noted.

The Wall Street Journal called it a lucid, judicious, powerful and heart wrenching history of Ukrainian Famine, he added. 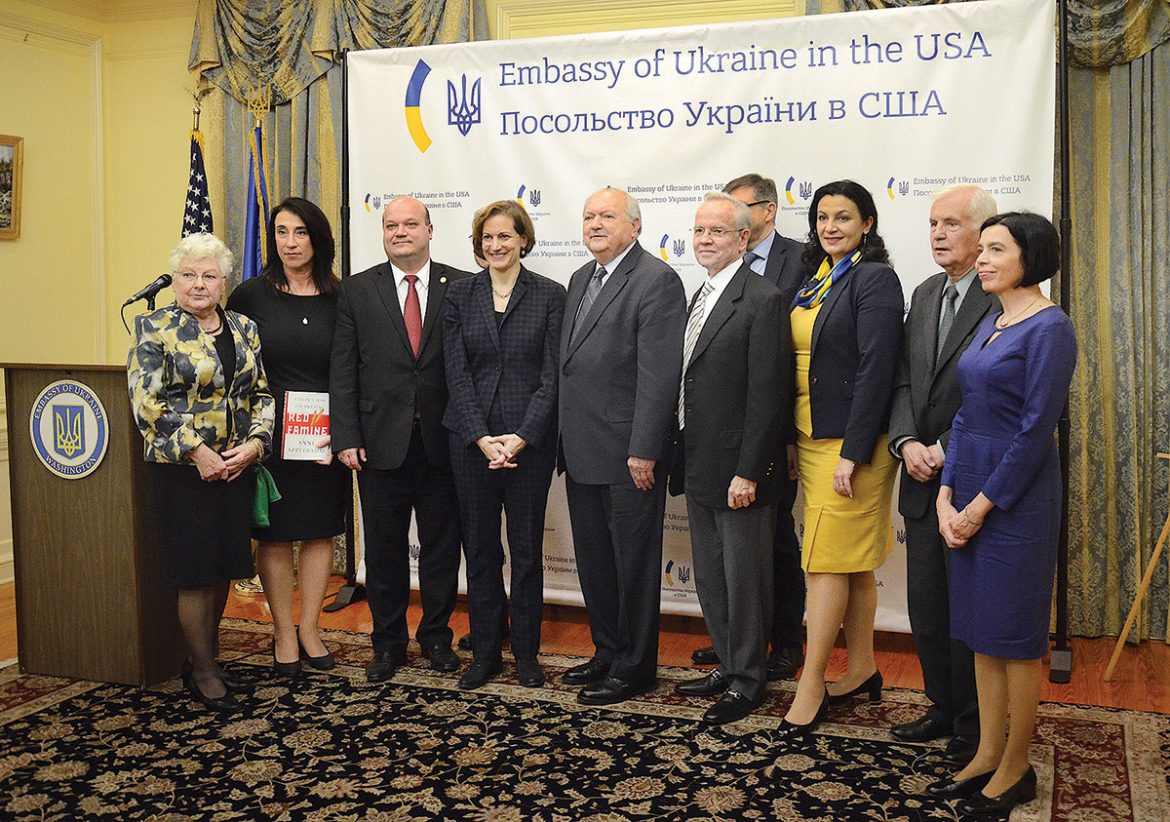 At the conclusion of the Antonovych Award ceremony at the Ukrainian Embassy in Washington, award laureate Anne Applebaum is joined by other prominent participants of the event for a group photograph. From left are: Dr. Martha Bohachevsky Chomiak, Liudmyla Mazuka and her husband Ukraine’s Ambassador Valeriy Chaly, Ms. Applebaum, Roman Sloniewsky, Andrew Lewycky (with Prof. Serhiy Plokhy behind him), Ukrainian Vice Premier Ivanna Klympush-Tsintsadze, Dr. Roman Szporluk and Dr. Ola Hnatiuk.

“I’m sure that there will be a lot of attention and a lot of awards that this book will bring to its author, but I’m very happy and very proud that the Antonovych Foundation Award will be the first one in that – I’m sure – very long list of awards,” he said as he introduced the honoree.

Ms. Applebaum thanked the Antonovych Foundation for the award and Prof. Plokhy, who suggested that she write a book about the famine in Ukraine, which took close to seven years to research and complete.

She was helped by many people inside and outside of Ukraine, and especially in the diaspora, by the Holodomor research foundation in Canada, the Harvard Ukrainian Research Institute, a wide variety of individuals, foundations and other sources.

“Ukrainian professors in Kyiv and elsewhere were incredibly generous with their work, with their observations and with their thoughts about the subject,” Ms. Applebaum said. “This is really a book that’s built on you and the work that you have done in the past.”

She started writing the book before the 2014 Maidan revolution in Kyiv with the help of her husband, Radoslaw Sikorski, who was then the foreign affairs minister of Poland (and now is the marshal of the Polish Sejm). “He was one of the Polish people who believed very much in a European Ukraine.” That was when she started writing much about Ukraine in her columns, she said.

In the last few weeks Ms. Applebaum has also spoken about her book and was warmly received at Ukrainian museums in New York and Chicago, and had an extended seminar at Harvard.

“History does offer hope, as well as tragedy,” she said at the conclusion of her remarks. “It’s important to remember that the Famine failed. Ukraine was not destroyed. The Ukrainian language did not disappear, and the desire for independence did not disappear. More importantly, nor did the desire for democracy or for a more just society, or for a base for a Ukrainian society that truly represents Ukrainians.”

“History of the Famine is a tragedy with no happy ending, but the history of Ukraine is not a tragedy. Millions of people were murdered, but the nation remains on the map… Years of terror did leave their mark, but although the wounds are still there, millions of Ukrainians can, and all of us can finally begin to heal up,” she emphasized. 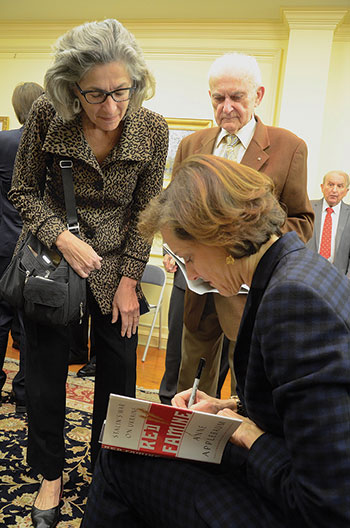 Among those attending the Antonovych Award presentation who brought a copy of Anne Applebaum’s “Red Famine: Stalin’s War on Ukraine” for the author to sign was Larysa Kurylas, the designer of the Holodomor Memorial in Washington.

Many in attendance brought with them their copies of Ms. Applebaum’s “Red Famine” and stood in line to have the author personally sign them, which she did at the end of the ceremony.

On the editorial page, Ms. Applebaum’s opinion column headlined “Evil ideas never die,” notes in the concluding paragraph that “Totalitarian ideologies never die, and neither do their appeal, and so their consequences must be carefully re-explained for each generation.”

Timothy Snyder, the American historian who received the 2014 Antonovych award, in his review of Ms. Applebaum’s “Red Famine” in the Book World section of that issue of The Washington Post, comes to a similar conclusion: “To be sure, Russia is not the Soviet Union, and Russians of today can decide whether they wish to accept a Stalinist version of the past. But to have that choice, they need a sense of the history. This is one more reason to be grateful of this remarkable book.”

Omelan and Tatiana Antonovych established their foundation in 1980, with the goal of advancing the study of Ukrainian culture. Since then, it has donated about $3 million to help finance the development of many academic and cultural institutions and monuments in Ukraine, among them, the reconstruction the National University of Kyiv-Mohyla Academy’s main library, the renovation of the Vasyl Stefanyk Library and Artists Palace in Lviv and the building of the Boykivshchyna Museum in Dolyna, western Ukraine, where Omelan Antonovych was born in 1914.

Three years ago, the foundation also provided $100,000 to help finance the building of the Ukrainian Holodomor Memorial in Washington, which was officially dedicated two years ago.

Omelan Antonovych spent his early adult years as a Ukrainian nationalist activist and spent some time as a political prisoner in Polish and Nazi prisons. Later, he received a law degree at the Ukrainian Free University in Prague in 1943. After World War II, he married Tatiana Terlecky, a physician who later became a world-renowned kidney specialist.

After the war, the couple emigrated to the United States, settling in Washington, where Dr. Antonovych worked as a scholar and taught in the capital area medical schools, while Mr. Antonovych focused on ranching and real estate.