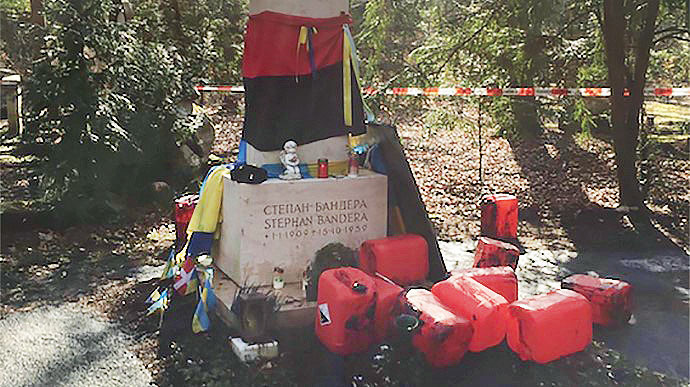 The grave of Stepan Bandera in Munich, Germany, after it was desecrated by vandals over the weekend of March 6-7.

The spirit of the Organization of Ukrainian Nationalists (OUN) leader Stepan Bandera lives on in Ukraine and internationally.

As a perennial exercise, a group of cowards once again defaced Bandera’s grave in Munich over the weekend, thinking that this somehow will diminish or eradicate his spirit. These actions only highlight and strengthen Bandera’s spirit and are a reminder of how strong this spirit is. If it was not, why would they bother to risk sneaking around a cemetery at night to deface a place of rest. Despicable!!

A simple message to those responsible for the desecration: It won’t work!
Not only is the grave set in stone, but so is the Bandera spirit. An erratic splashing of paint or strewing of rubbish around the grave only solidifies the spirit and exposes the crudeness of those involved.

The spirit of Bandera and OUN then and now work to promote the aspirations of a nation and they are a positive element in building Ukrainian statehood; likewise, this spirit of Ukrainian nationalism offers then and now a positive trait that individuals can use to identify with their nation and its interests while opposing those who endeavour not to allow Ukraine to determine its own destiny. These aspirations are alive and well.
These elements of nationhood, statehood and a desire to determine Ukraine’s destiny by demanding territorial sovereignty are very much part of the DNA of the Ukrainian people and the Ukrainian diaspora.

Are there challenges? Yes, there are. But Ukrainians are united under the banner of building a state, which includes safeguarding their own unique identity and language, pursuing economic development, fostering public and cultural diplomacy, and enjoying all of the varied facets that come with being a European nation.

On the cusp of the 30th anniversary of Ukraine’s independence, we can reflect on the road to independence, the struggles of OUN-UPA (Organization of Ukrainian Nationalists and the Ukrainian Insurgent Army) against two genocidal enemies, the Ukrainian formation of Divizia Halychyna (the Galicia Division) in the forlorn hopes of creating a national army, and the political prisoners of the 1950s, 1960s, 1970s and 1980s who fought with the same aspirations – a free, independent and sovereign Ukraine.
Today Russian aggression continues in eastern Ukraine. Some of those individuals who fight in Ukraine’s armed forces today say “we are the new UPA. We are fighting for the same aspirations – sovereignty.”

The Russian disinformation campaign continues in the hybrid space. A day does not go by without some lewd comment about Ukraine’s aspirations or without the slandering of those who fought for these goals and continue to fight!

We intend to give the scoffers no oxygen!

Was Bandera the only leading light then and now? No. He was one of a myriad number who helped form national thinking, though he did play a major role.
Therefore, to diminish, downplay, ridicule and accuse Bandera of being a fascist collaborator has no bearing or standing.

In a presentation last weekend, Ivan Patryliak, a respected historian at the Taras Shevchenko University in Kyiv, was asked the following question: “How do you reply to those who accuse Bandera, OUN-UPA or the Divizia Halychyna of being fascist collaborators and nationalists?” His reply was simple.

To those who make these claims, ask them whether they have the faintest understanding of the meaning of the terms/words they use or whether they simply twist them to suit an argument. You will find the claimants’ responses weak, subjective and unfounded in as much as they have no idea what these terms mean and only regurgitate the propaganda that has been around for years.

We should also base our responses on facts, not fiction.

The Nuremberg trials – an international commission – examined the role OUN-UPA played during the war. They found that there was no case against the two groups.

The Duchenne Commission in Canada investigated Divizia Halychyna. They found that there was no case against the group.

Both of these commissions were internationally formed, reputable investigations.
But some won’t let the truth get in the way of a good story.

Yet the protagonists of the old Soviet system, which form part of Moscow’s contemporary fake information machine, continue with the same rhetoric.

For those who remember Visti z Ukrainy (News from Ukraine) in the 1970s and 1980s – which was partially a Soviet propaganda machine that tried to influence public thinking in the diaspora – they used the same terms: nationalist, collaborator, bourgeoise nationalism, fascist. In 2021, keyboard cowards are regurgitating the same old tropes.
The difference is that back then it took time for news from Ukraine to circulate internationally. Today, it takes a one-second press of the send button.

The desecration of graves and memorials, spreading fake news and propaganda to shadow truth and internationally accepted values have never worked in the long term.

Sooner or later the vandals get caught and the writers are exposed.

Stefan Romaniw, OAM, is the first vice president of the Ukrainian World Congress and the co-chair of the Australian Federation of Ukrainian Organizations.