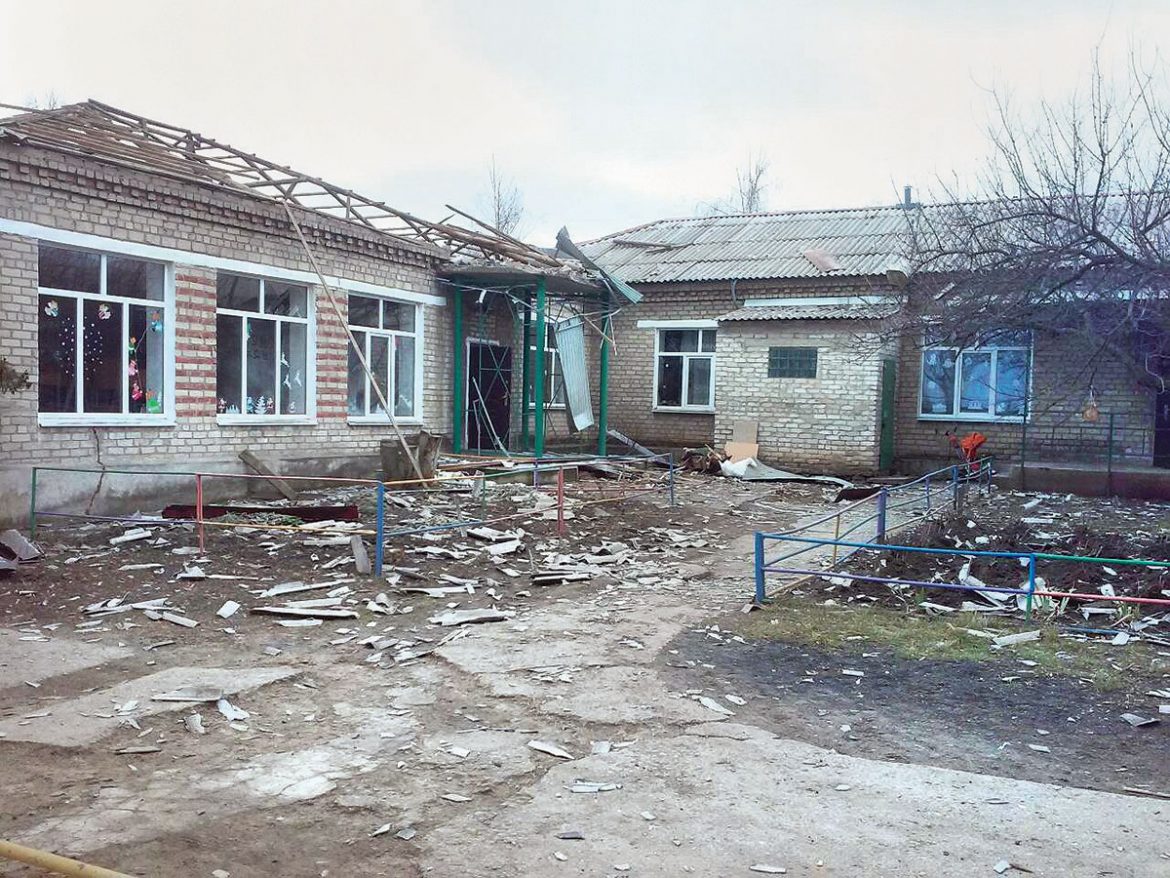 Russian shelling from occupied Horlivka damaged a kindergarten in Novoluhanske in Donetsk Oblast on December 18, a day before St. Nicholas Day.

KYIV – Tensions between Ukrainian politician Mikheil Saakashvili and erstwhile ally Ukrainian President Petro Poroshenko were further strained after the former Georgian leader called on the president to resign in an open letter he published on his Facebook page on December 19.

“Admit to yourself and the nation that you and your associates aren’t capable of and don’t wish to change Ukraine for the better,” he wrote his former university friend. “Your voluntary resignation is one of the last chances to quell the political crisis, which only can deepen.”

It was in retaliation for the publication by the president’s office of a conciliatory private note from Mr. Saakashvili to the president on December 18. In the letter Mr. Saakashvili admitted to “have committed and [continues to] commit many political mistakes,” while calling for dialogue and “the need to de-escalate and not allow for the situation to destabilize.”

Mr. Poroshenko had appointed his former college chum as governor of Odesa in May 2015, but the two had a falling out after the latter resigned a year later, alleging obstruction of his efforts to root out graft in the port city.

The former two-term Georgian president also called allegations that he cooperates with Russia’s spy agency, the Federal Security Service (FSB), “absurd.” That was in reference to audio recordings that the Prosecutor General’s Office released on December 5 as purported evidence that Mr. Saakashvili was receiving over $300,000 from Russia-based, exiled Ukrainian businessmen controlled by the Kremlin to stage rallies.

Authorities also suspect Mr. Saakashvili of attempting to overthrow the government, but they lost a court hearing on December 11 to place him under house arrest after he had been released from detention. Prosecutors challenged the ruling in the Kyiv Appellate Court four days later.

The correspondence followed two consecutive Sundays of anti-government protests that Mr. Saakashvili’s Movement of New Forces staged in central Kyiv together with opposition lawmakers. Among their demands is quicker progress on stamping out high-level graft, including the establishment of a long-promised anti-corruption court.

The latest demonstration on December 17 by about 5,000 protesters ended in clashes with police who were preventing them from entering the October Palace, a concert hall that was a focal point during the Euro-Maidan Revolution three years ago. A Glen Miller concert was underway when protesters tried entering the premises. 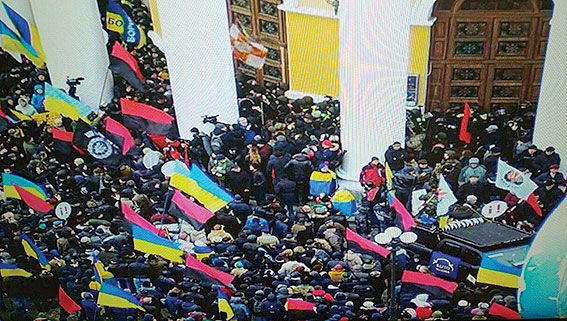 Anti-government protesters storm the October Palace, a concert hall, in Kyiv on December 17 in an attempt to take it over and use it for their headquarters.

Speaking on stage at Independence Square that afternoon, the now stateless Mr. Saakashvili told the crowd that “right now we’ll go to the October Palace [concert hall], and the October Palace will become the headquarters of our coordination council…”

Thirty-two police officers were injured in confrontations as Mr. Saakashvili’s supporters smashed the glass panes on the doors of the main entrance to the building, the Internal Affairs Ministry reported.

Afterward, Mr. Saakashvili disavowed the violence and said he would not hold further rallies during the winter holidays for fear of additional “provocations.”

The U.S., British and Canadian embassies denounced the violent demonstration.

“We agree with our colleagues from Canada and the U.K. Attempts to capture and destroy public buildings are an abuse of the right to peaceful protest,” the U.S. Embassy said in a tweet.

At least nine Ukrainian soldiers died while fighting in eastern Ukraine during the past week as Russian-led forces ratcheted up attacks on military and civilian targets.

“We note with concern a sharp deterioration in the security situation with ceasefire violations reaching levels not recorded since February of this year,” said Ertugrul Apakan, the chief monitor of the Organization for Security and Cooperation in Europe (OSCE), in a statement on December 19.

The escalation started after Russia on December 18 said that it would leave the Joint Center for Control and Coordination (JCCC), a key peace implementation tool that worked closely with the OSCE in the Donbas.

America’s special envoy for negotiations to end the Donbas war, Ambassador Kurt Volker, said that the “decision for peace lies with Russia.” In a December 19 tweet he noted: “Peace in eastern Ukraine can come if Russia pulls out its forces and stops support for its proxies.”

In particular, some 40 BM-21 Grad rockets struck civilian areas in the village of Novoluhanske in Donetsk Oblast on December 18, the Defense Ministry reported. Eight civilians, including a 6-year-old child, were wounded in the attacks. Fifty houses, nine high-rise apartment buildings, a school and a kindergarten were damaged. The village’s power and gas lines were damaged as well.

“The U.S. confirms Russia led [a] Grad rocket attack on the town of Novoluhanske and the Donetsk filtration station,” State Department spokesperson Heather Nauert said in a news briefing on December 19. “Russia is the source of the conflict and should withdraw its forces… and agree to a robust United Nations peacekeeping mission.”

Afterward, Ukraine’s members of the JCCC left the territories outside of government control, said Yuzef Venskovych, spokesman of the General Staff of the Ukrainian Armed Forces. Interfax Ukraine cited him as saying that “Russia is fully responsible for the development of the situation surrounding the protection of the OSCE Special Monitoring Mission observers in the territories outside Ukraine’s control.”

An “indefinite New Year’s truce” is to commence at midnight on December 23, according to Ukrainian peace negotiators in Minsk taking part in what is known as the Trilateral Contact Group. It also consists of representatives from Russia and the OSCE. Previous holiday ceasefires have failed over the course of the three-year war in which more than 10,300 people have been killed since April 2014.

Meanwhile, the Security Service of Ukraine (SBU) detained a high-ranking Ukrainian official for allegedly spying on behalf of Russia, according to a December 20 news release from the SBU.

The suspect is Stanislav Yezhov, the deputy chief of protocol at the Cabinet of Ministers and the prime minister’s personal translator, Ukrainian News agency reported.

He will be charged with state treason, the SBU said, adding that he was detained at work and was served with a notice of suspicion. The suspected mole had been cleared in May 2016 of involvement with Communists and the previous administration led by ex-President Viktor Yanukovych in a drive called, “lustration,” according to the Cabinet of Ministers website.

“I would like to mention that the official had access to a rather narrow [set of] insider information at the Cabinet,” Oleksiy Petrov, head of the SBU’s counterintelligence unit, told reporters. “He very responsibly, conscientiously and creatively worked for the Russian special services.”

He also worked with Prime Minister Volodymyr Groysman in the Verkhovna Rada when he was the Parliament’s speaker. According to Ukrainian News, Mr. Yezhov had also worked at the Ukrainian Embassy in the U.S. and previously at the Presidential Administration.

The suspect’s wife is Russian citizen Yulia Miroshnykova, according to her husband’s March 10 asset declaration. She has two accounts with state-owned Russian bank Sberbank, one in rubles and one in U.S. dollars, according to the declaration.

Regarding the pending charge of treason being leveled against her husband, Ms. Miroshnykova said it is “nonsense and surrealism… I have nothing else to say,” Strana.ua news portal reported.