FRESNO, Calif. – “Art and War: Donbas, 2014 to the Present,” an exhibition of paintings and drawings by Yulia Gasio, a Fresno State alumna and a faculty member at California State University, Long Beach, opened at the Henry Madden Library’s Leon S. Peters Ellipse Gallery on February 6. The opening ceremony attracted faculty and students from California State University, Fresno, as well as from Fresno Pacific University and Fresno City College, historians, artists, journalists, board members from the Fresno Art Museum, representatives from the Fresno community and Ukrainian organizations from southern California.

The Rev. Dr. Gregory Zubacz of St. Michael’s Ukrainian Greco-Catholic Church in Fresno and associate provost at Fresno Pacific University invited the audience to bow heads in a minute of silence and pray for the souls of over 10,000 slain in the brutal and senseless conflict in eastern Ukraine. He blessed all guest speakers to courageously spread the truth about the largest land war in Europe since World War II so that the listeners may see the reality around them and work for the restoration of peace and justice. 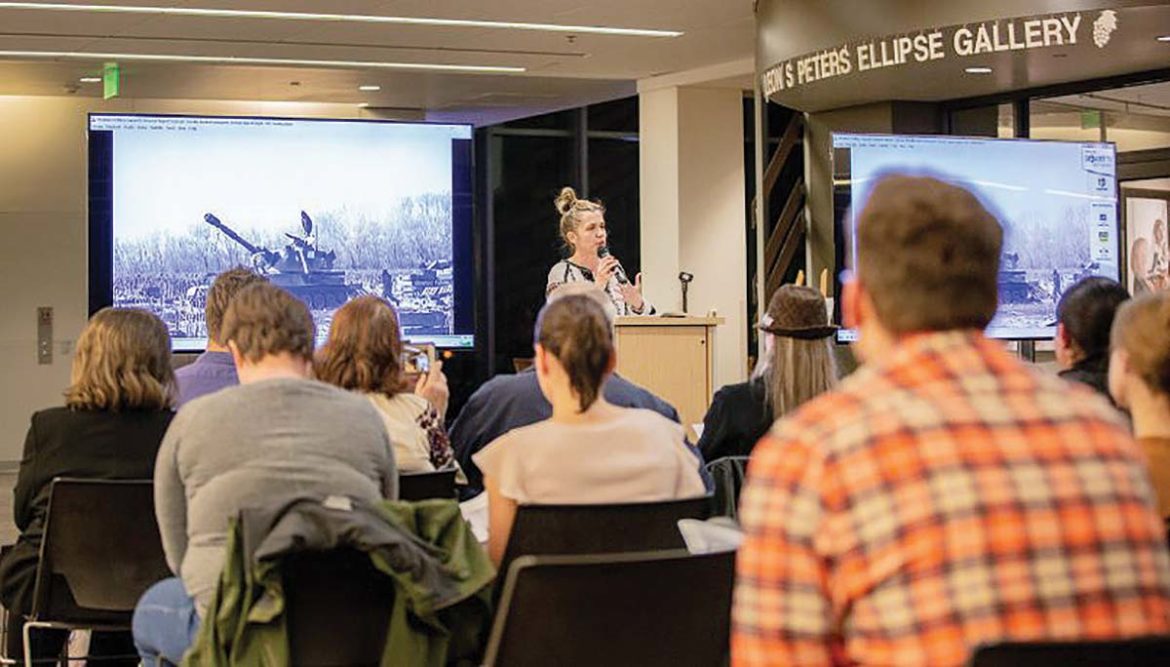 Artist Yulia Gasio speaks at the opening ceremony of the “Art and War” exhibition at Fresno State’s Henry Madden Library on February 6.

In a dramatic performance, George Wyhinny sang a cappella the mournful song “Plyve Kacha,” interspersing the lines in Ukrainian with stanzas in English translation against a video footage of the carnage in February 2014 during the Revolution of Dignity. Since then, the song from the Lemko region has become an unofficial requiem to commemorate the slain Heavenly Hundred who defended the Euro-Maidan and to honor soldiers and volunteers fighting in the Donbas on the frontline of Russia’s ongoing war against Ukraine.

Mr. Wyhinny, who also served as narrator, raised rhetorical questions: “What if the rest of the world does not hear Ukraine’s cries? What if the world forgets about her, while Ukraine is slowly wiped out as Russia claims it bit by bit until she exists no more, and her sons are dying in foreign land because the land that was theirs is now gone?” 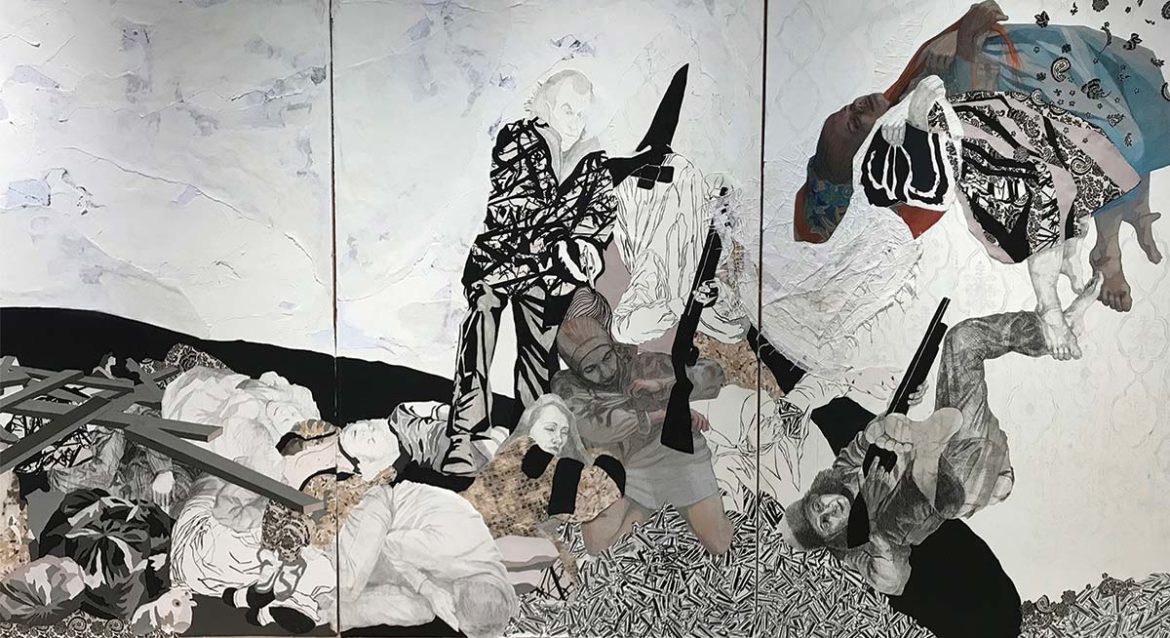 In a more subdued tone, Prof. Hiroaki Kuromiya of Indiana University, Bloomington, spoke about “How to Understand the Enigma of the Donbas,” emphasizing that the Donbas is a peculiar place where no ideology – liberalism, communism or nationalism – has truly captured the hearts and minds of its population. An American historian of Japanese origin, Dr. Kuromiya is a specialist on Ukrainian and Soviet history and the author of “Freedom and Terror in the Donbas: A Ukrainian-Russian Borderland, 1870s–1990s” (Cambridge University Press, 1998). The speaker challenged the stereotype about the Donbas as a stronghold of Russian separatism, arguing that, in fact, the Donbas was and is a supremely Ukrainian land. The war, he underscored, was transplanted from outside.

The artist, Yulia Gasio, a native of Luhansk, shared her family’s story. The artist’s self-perception as a citizen of Ukraine and America was thrown into relief in 2014, when Russia unleashed unprovoked aggression and occupied the Ukrainian territories of Crimea in the south and Luhansk and Donetsk in the east. In 2016, during her graduate studies at Long Beach, Ms. Gasio started expressing her political thoughts and feelings in 10 drawings and paintings featured at the exhibition.

“In my paintings and drawings, I depict the trauma of an ongoing war through the experiences of my immediate family living in the war zone of eastern Ukraine,” said the artist’s statement. During the ongoing Russian occupation, three of her family members were captured and tortured, which was a watershed moment in Ms. Gasio’s life that has defined her as a Ukrainian and an artist.

The artist’s response to the war brought to the forefront not just physical violence but a clash of identities, cultures, values and ideologies. “My use of the traditional embroidery points to my understanding of a Ukrainian spring that revitalizes national identity and acts as a political statement in the face of ethnic erasure,” emphasized the artist.

After 2014, the artist re-evaluated the origins of pan-Slavic identity and began to question the Soviet propaganda and historical perspective she was raised with as truth all her formative years. Russia’s war against Ukraine, which caused inner division of the nation, distress and a split among the Ukrainian people, has led to a maturation of Ms. Gasio’s artistic purpose into one of civic duty. In her art, Ms. Gasio creates the new pro-patriotic identity. The artist has used the power of her brush to demonstrate to the world Ukraine’s glory and sacrifice, and celebrate its enduring soul. Painting has served as a therapy for the artist herself and allowed her to accept the pain that her family has suffered.

As an art historian, Ms. Gasio has been inspired by her professors, Susana Sosa of Fresno City College and Dr. Laura Meyer of the College of Arts and Humanities at California State University, Fresno. As Fresno State proudly carries the heritage of the first feminist artist, Judy Chicago, Ms. Gasio believes that this feminist philosophy echoes Ukrainian matriarchal culture and resonates with her upbringing. 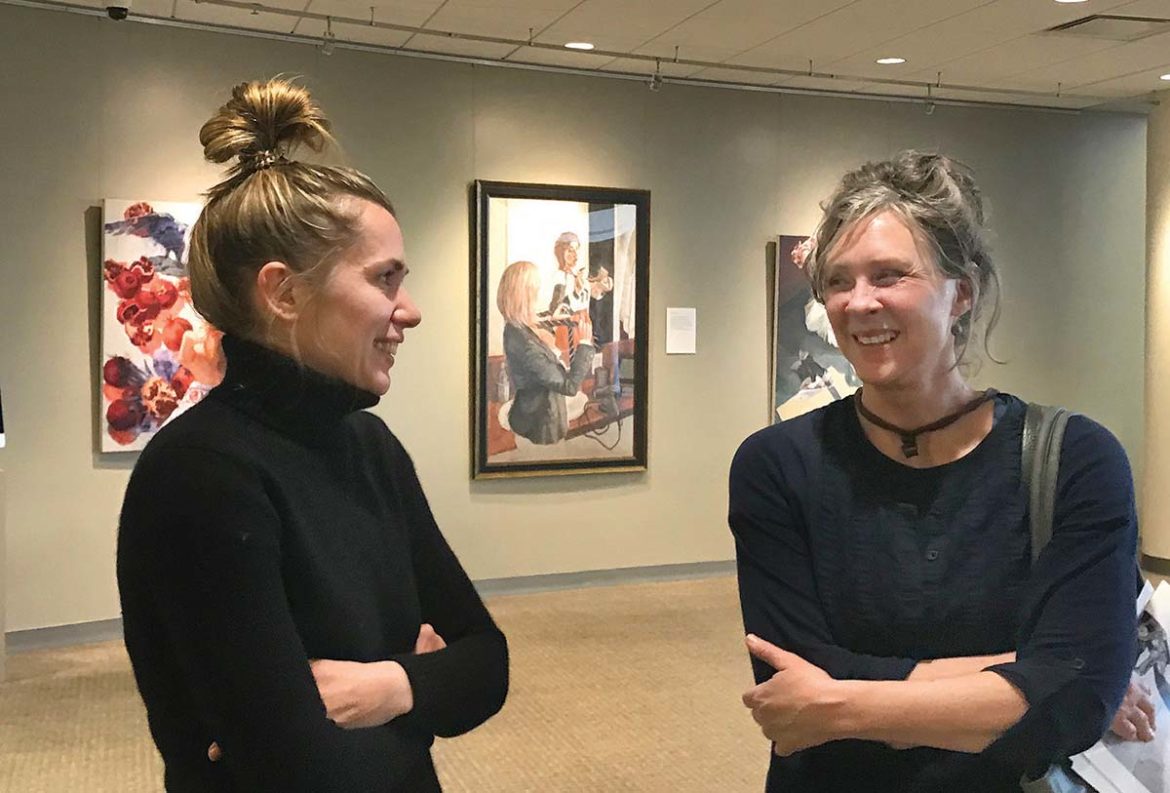 The dean of the College of Social Sciences at Fresno State, Michelle DenBeste, stressed that an “event like this adds to our knowledge about the region, allowing professionals to speak knowledgeably about the topic they care about; it brings awareness to broader audiences of people who are not sitting in college classrooms but are interested in the region, allowing them to understand the current period in history.”

Most importantly, “it brings art, history and culture to academia, where people from different disciplines can think about the difficult topic in a different context,” said Dean DenBeste.

“Very moving exhibition. Must-see for those that are students of man’s inhumanity to their fellow man. Much to learn about the impact on civilians by the Russian war on the Donbas region of eastern Ukraine,” noted Daniel Comelli, a retired physician from Fresno. (An audio recording of the opening ceremony is available upon request courtesy of Mr. Comelli.)

A video interview with the artist, which loops on an iMac in the gallery, was directed by Mr. Wyhinny with the assistance of his crew members: cinematographer Calvin Nemeth and video editor Miguel Sosa Ojeda of Fresno State.