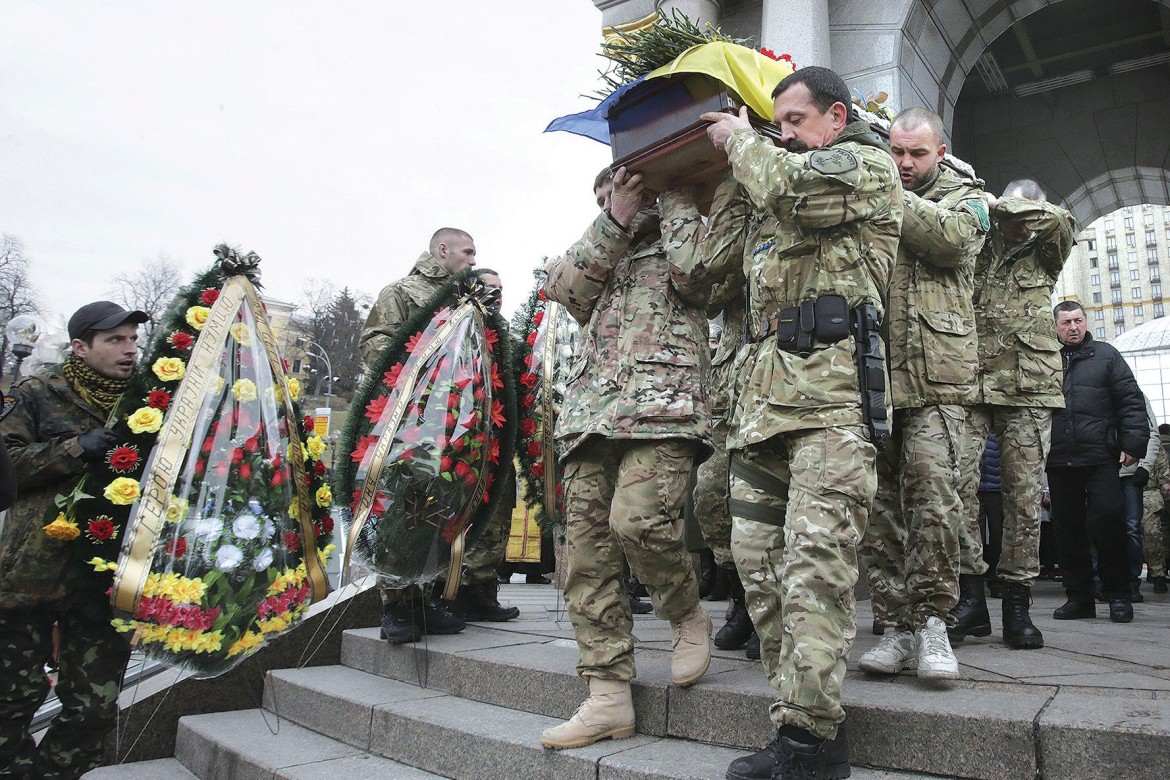 Aidar Battalion members carry the coffin of a fellow fighter on February 2 on Independence Square in Kyiv.

Rocket attacks in the east marked the beginning of 2015 for Ukraine. Twelve civilians were killed and 11 were wounded by a missile fired by Russian-backed militants that hit a bus in the town of Volnovakha, 35 kilometers southwest of Donetsk, on January 13. 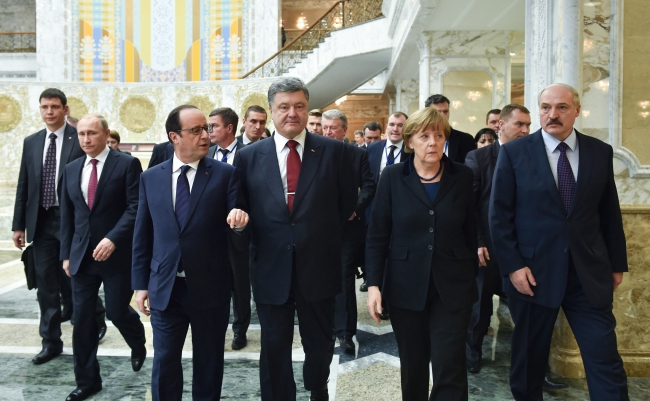 President Petro Poroshenko stated: “This is a disaster and a tragedy for Ukraine. This is more evidence after the MH17 plane, after the many civilian casualties – it is a crime that terrorists from the so-called DNR and LNR [Donetsk and Luhansk peoples’ republics] have severely violated my peace plan, which was approved and supported by the European Council and the European Union.”

It was yet more evidence also that the ceasefire agreed to in Minsk in September of 2014 was being violated almost daily. As of the beginning of 2015, it was noted that over 4,700 people had been killed and more than 10,000 injured in the fighting in Ukraine’s east that began in April 2014.

At year’s end, the United Nations High Commissioner for Human Rights reported that there were now more than 28,000 casualties in Ukraine since the war began, including more than 9,000 killed. In addition to the dead and wounded, more than 1.5 million were internally displaced as a result of the conflict.

Our Kyiv correspondent, Zenon Zawada reported that pro-Russian rebels in the Donbas, backed by the Russian military, on January 13 launched their biggest military campaign against Ukrainian forces since the September 5 Minsk II ceasefire protocols, staging hundreds of attacks in a fierce attempt to take control of the territory of the ruined Donetsk airport. Besides the aforementioned Volnovakha attack, a January 19 explosion near a Kharkiv courthouse injured 14, four of them seriously, and a bridge was blown up the next day in the Zaporizhia region as a cargo train crossed it. The Russian government intended its military-terror campaign to boost its negotiating position with the Europeans and Ukrainians in talks to resolve the Donbas war, said Volodymyr Fesenko, the director of the Penta Center for Applied Political Research in Kyiv.

Soon afterwards, news came that the Donetsk airport was completely destroyed and was no longer suitable for defense. Thus a decision was made to withdraw Ukrainian servicemen from the new terminal, reported Andriy Lysenko, spokesman for the Anti-Terrorist Operation (ATO). The Ministry of Defense reported the most difficult situation was towards Debaltseve, where Kremlin-backed terrorists continued shelling Ukrainian positions. Towards Mariupol, militants repeatedly shelled Ukrainian positions. Several media outlets showed video footage of Kremlin-backed forces parading captured Ukrainian soldiers in Donetsk.

Also at the beginning of the year, on January 12, Interpol issued wanted person alerts for former Ukrainian President Viktor Yanukovych, former Prime Minister Mykola Azarov, and two of their associates on charges of embezzlement and misappropriation. The Ukrainian government had submitted an alert request as early as March 2014 for Mr. Yanukovych for abuse of power and murder charges. Yet Interpol revealed that it didn’t respond because the request wasn’t compliant with its rules and regulations. Interpol’s decision came criticism was mounting of the current government’s failure to successfully criminally prosecute those who ordered and committed the shootings and killings in the winter of 2014 of Euro-Maidan activists. More than 100 were killed, and more than 1,000 were injured or missing. All the key Yanukovych administration officials fled abroad, mostly to the Russian Federation. As many as 5,000 people fled to Russia – that number included officials, their relatives, and support and service staff.

Meanwhile in Davos, Switzerland, at the World Economic Forum, President Poroshenko on January 21 accused Russia of sending more than 9,000 troops into Ukrainian territory. He demanded that Russia immediately implement all of its obligations under the Minsk peace plan, close Russia’s border with Ukraine, “and withdraw all the foreign troops from my territory.” Mr. Poroshenko said that in addition to the thousands of troops in Ukraine, Russia had about 500 tanks, heavy artillery, and armored personnel carriers. The president asked: “If this is not aggression, what is aggression?”

Ukraine’s Parliament on January 27 adopted a statement branding Russia an “aggressor state” – a move that deputies hoped would pave the way for punishment under international law. The Verkhovna Rada also voted that day to define self-styled “people’s republics” in the eastern regions of Donetsk and Luhansk as “terrorist organizations,” and to appeal to the international community for additional nonlethal military aid and stronger sanctions against Russia.

Russia continued sending its “humanitarian” convoys into Ukraine throughout the year. On January 8, the 11th such convoy was reported. By the end of the year, there’d been at least 47 so-called humanitarian convoys from Russia into eastern Ukraine. All but one of the 44 vehicles crossing the border on December 24 were labeled “Humanitarian help from the Russian Federation,’’ the Organization for Security and Cooperation in Europe (OSCE) reported.

Aidar Battalion members carry the coffin of a fellow fighter on February 2 on Independence Square in Kyiv.